A brief history of art for visitors to Tuscany

When you’re traveling, depending on what country you are visiting, certain chronological periods of art are going to be more prominent than others. It’s useful to be able to name and recognize them, and have a sense of what years are involved. In Italy, and specifically in Tuscany, most of what you’re likely to see goes from the Etruscans to the 19th century. In this post, I’m going to give the world’s most opinionated and fast, but hopefully memorable, survey of two thousand plus years of art history. 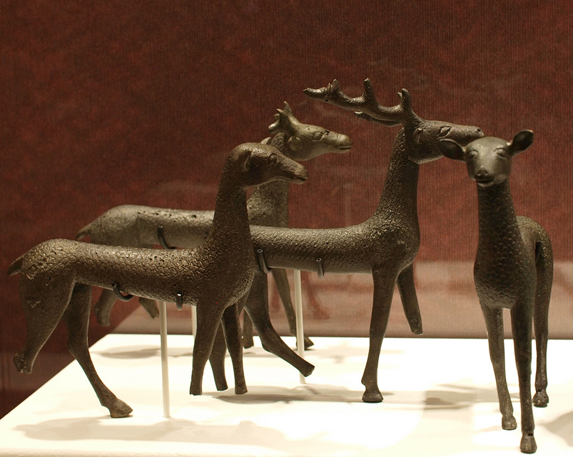 Here in Tuscany might be the first time you encounter the Etrucans – or at least some archaeological evidence of them. This ancient civilization occupied the area rich in minerals now known as Tuscany – you can hear their name in it, right? – and northern Lazio during the 700 years or so before Christ. The Etruscans were contemporaries of the Ancient Greeks, and there was trade contact between them, so much of their pottery looks similar. The area was then colonized by the Ancient Romans, who took over Etruscan territories and seem to have incorporated Etruscans into their colonies (rather than conquering and killing them), probably due to the value of their workmanship. The Etruscans were good with terracotta and metal, and there are a ton of small archaeology museums around Tuscany that display tomb finds from this culture, about which we know rather little since their written record is scarse.

Where to see Etruscans: There are lots of Etruscan sites in Maremma, like Vetulonia and Populonia. Cortona and Chiusi have good Etruscan museums. Volterra is another Etruscan town with an important museum.

And then there were the Romans, who simply pillaged and stole from the Greeks and Etruscans and then formed their own pretty great culture. Here in Tuscany, any archaeological site will have layers of both Etruscan and Roman construction. While in Rome you’ll see lots of glorious sculpture and architectural ruins from this period – from about 500bce to (technically) 27bce – in Tuscany there’s not as many visible remains of the Romans, at least on the surface.

Where to see Romans: The Vatican museums have the best collection of Roman sculpture, followed by many other Roman museums. In Tuscany, the Medici collected Roman sculpture and some of it is on display at the Uffizi, other bits at the Archaeological Museum. There’s a Roman Ampitheatre in Fiesole (just outside Florence), and you can see the Roman imprint on the grid pattern layout of the central nucleus of the city of Florence. 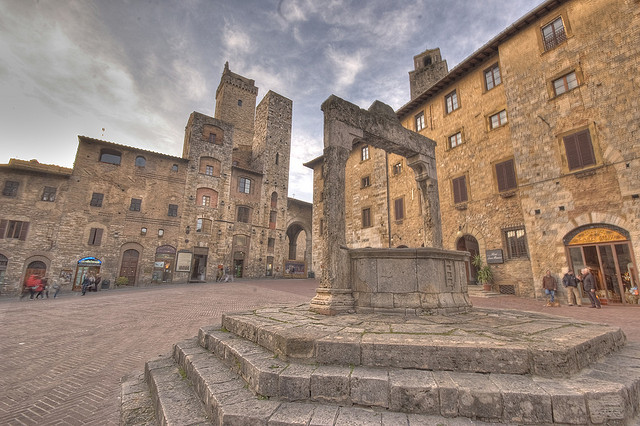 Then came the Middle Ages. Basically, nothing happened. Or at least, not a whole lot that you can SEE as a visitor. They built cities (muchly in wood) and churches (with less wood and more stone) but most of these things were destroyed either naturally, or by subsequent “restoration” or rebuilding. San Gimignano is the best example we have of Medieval Tuscan town with its many towers – Florence used to have as many towers, but they were chopped down to regulation height by uneasy rulers who wanted “the biggest tower”. Tuscany also abounds with medieval hill-towns, which often preserve their historical enclosed form more than anything else of substance.

And of course they did paint in the middle ages, but there’s not much kicking around from that period. When you see it, you’ll recognize it by its gold backgrounds and very static figures.

Where to see the Middle Ages in Tuscany: head to San Gimignano for the towers and a town of your choice for the cute enclosed town feel – Monteriggioni is a good one. 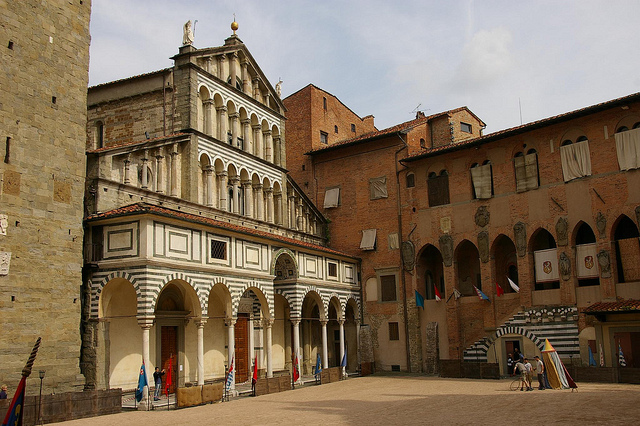 Part of the Middle Ages that deserves its own paragraph in this story is the Romanesque period, which refers mainly to the 11th century. You’ll see a lot of architecture here that is in the Tuscan Romanesque style, so it’s useful to be able to identify it. The word “Roman” is at its base because in this period, builders seemed to be using some of the vocabulary of ancient architecture, like triangular pediments above columns, rounded arches and stuff like that. Florence’s Baptistery is in this style, as is its church of San Miniato. In the Renaissance, they believed that the Baptistery was Roman, so convincing was the imitation. Inside the baptistery is a rare mosaic for this city, and it is from the same period. It’s the perfect place to get a sense of the aesthetics of the 11th century – heavy gold backgrounds and Byzantine-influenced figures.

Where to check out Romanesque Architecture: Pisa and Pistoia both have cathedrals in the tuscan romanesque style.

Don’t ask me what was happening in the 12th century. My guess is… nothing happened (of note, in art). Actually, this is not true. The Tuscans were working very hard to become very rich bankers and wool traders. They were also working towards coming up with forms of Republican government, which they succeeded in doing in the mid 13th century. They were amassing wealth to the point that very soon, they would look for an opportunity to spend it. 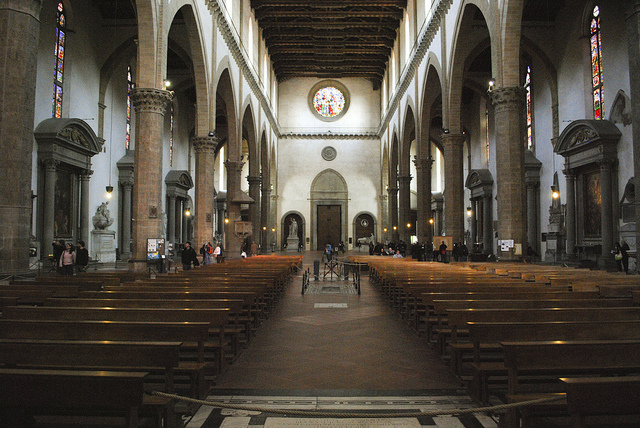 In terms of artistic style, most of the work you’ll see from about 1200-1425 can be called Gothic, though there are a few moments during this period that get special names. Towards the end of the 13th century, the Florentines were so rich, they started a number of important building campaigns, including the Duomo and the church of Santa Croce. These buildings are in the Gothic style, although their facades are technically “Neo-Gothic” because they are 19th century imitations. Gothic architecture is characterized primarily by pointed arches. That’s a simple but really the most effective way to identify it!

Where to see Gothic architecture: most of Florence! Try the interior of the church of Santa Croce for a good example. The Duomo of Siena is also Gothic. 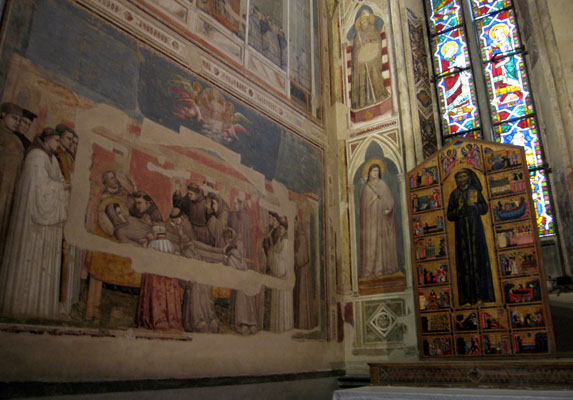 During this same moment in the 13th century, Giotto came along, and although we’re still kinda in the Middle Ages, they call the artistic style he created Proto Renaissance. Giotto was a painter who is particularly famous for his frescoes commissioned by Franciscans in Assisi and Florence, as well as for a jewel-like chapel in Padova. Unlike his Gothic peers, Giotto looked at nature, and tried to represent figures, emotions and space in a more natural way. When he died, even his students didn’t paint quite like him, and it took over a hundred years until other artists picked up on the same tricks.

Where to see Giotto: the church of Santa Croce in Florence 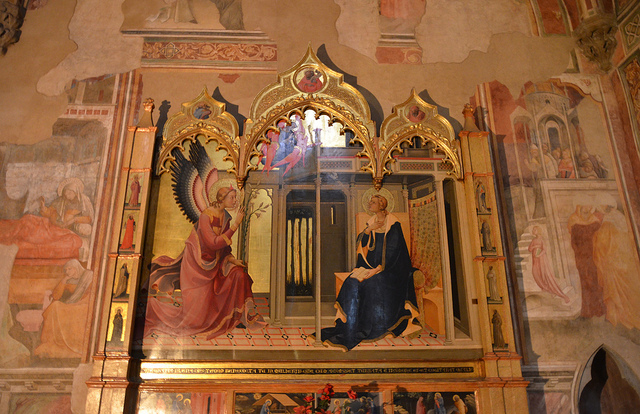 Despite Giotto, a style called International Gothic was all the rage in the beginning of the 15th century. This was a particularly decorative version of the Gothic we’ve already met, with plenty of colours and curly cues and gold backgrounds, favoured by rich patrons around Europe.

Where to see International Gothic: there are some lovely examples in the room dedicated to this period in the Uffizi. In the church of Santa Trinità in Florence there are 2 chapels with frescoes and altarpieces that were expensive commissions in this style. 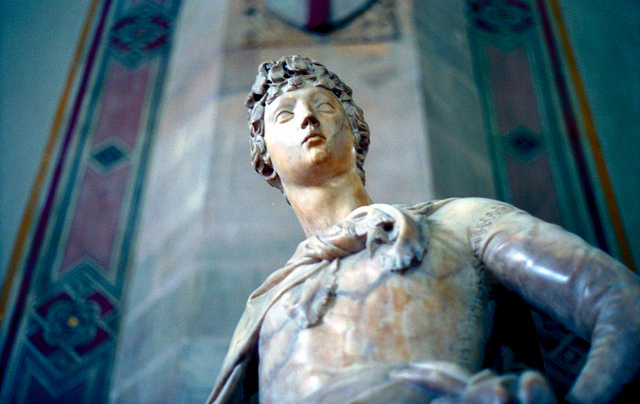 The Renaissance in Florence and Italy is the period from about 1400-1600. It usually gets divided up into sub-periods, because the style evolved quite quickly, moving first towards greater naturalism in representation, and then at the end of this period, taking that naturalism to extremes so that they look no longer quite so natural (and that is called Mannerism). The Renaissance actually started with sculpture – the first realistic looking, life-sized marbles were carved by Donatello. To see them, see copies outside Orsanmichele and go to the Bargello sculpture museum. This moment is referred to as Early Renaissance and means the first 20 years of the 15th century.

In architecture, you’ll know a building is Renaissance if it has rounded arches and the proportions look like they were drafted out with a ruler. While Brunelleschi is best known for his Duomo, he developed the Renaissance style in architecture, which you can best see at the church of San Lorenzo, where form is emphasized by the stark alternation of white walls and dark grey, smooth stone. This style was then expanded upon and imitated by many others after him, and carried out of Florence to smaller towns (there’s an interesting example in Montepulciano, for example).

Meanwhile, in painting, a young guy named Masaccio started doing the kinds of things Giotto did (in fact, he drew figures in Giotto’s chapel for practise). Masaccio depicted figures that look like sturdy people who stand on the ground, and cast shadows. And although he didn’t know what he was doing, he fudged perspective – of the scientific sort you learn how to draw in school, with one point on a horizon line. Other guys like Brunelleschi would come along after and really figure that out. Go check out Masaccio in the Brancacci chapel in Florence.

Then we come to the super duper High Renaissance which is famous for the other Ninja Turtles: Leonardo, Raphael and Michelangelo (Donatello was the fourth turtle, and not from the High part of this period!). Works from this period reach an ideal of beauty and perfection combined with a representation of the soul or spirituality. The major High Ren works are located in Rome, where Julius II employed Raphael and Michelangelo. The Uffizi has works by Leonardo that fit the bill, and may be the best place to witness the high Renaissance in Florence.

Coming on the edge of the High Renaissance is a period sometimes referred to as Mannerism. We see “mannerist tendencies” in the late architecture of Michelangelo, such as at his Laurentian Library in Florence (at San Lorenzo). In painting, works

When these artists died out, that was the end of Florence and Tuscany’s reign in the kingdom of art history. The next period, at the end of the 16th century, is Baroque, and there is not a whole lot of this in Florence (you’ll have to go to Rome for that). You can see some early Baroque in Florence at the Church of Ss.ma Annunziata.

Of course, you’ll see some art from later than the 17th century around Florence and Tuscany. The styles range from watered down Baroque to Neoclassical, and then in the 19th century, Neo-Gothic as well as modern. So that sums up 2000+ years of history.

Further resources: The best places to review your knowledge of art history – before a trip or just for fun – is SmartHistory. Another favourite of mine is the Met’s timeline of the history of art.

UPDATE: This post is shortlisted by Italy Magazine as best blog post on an art and culture blog for 2014!