Being a woman in Italy… in the Renaissance

Anytime any of my friends expresses a preference for having lived in the Middle Ages or the Renaissance, I like to remind them that had they done so, their chances of dying in childbirth would be much higher than their likelihood of receiving any education. A 10 percent chance of dying in childbirth awaited each pre-modern birth, and women were pregnant continuously from adolescence until their forties, upping that percentage in a manner impossible to calculate for this non-numerical brain. Not to mention that this was no fun at all. And there were no drugs. But someone had to bear heirs, and since 50% of children died before the age of 2, you had to up your chances by popping them out constantly. 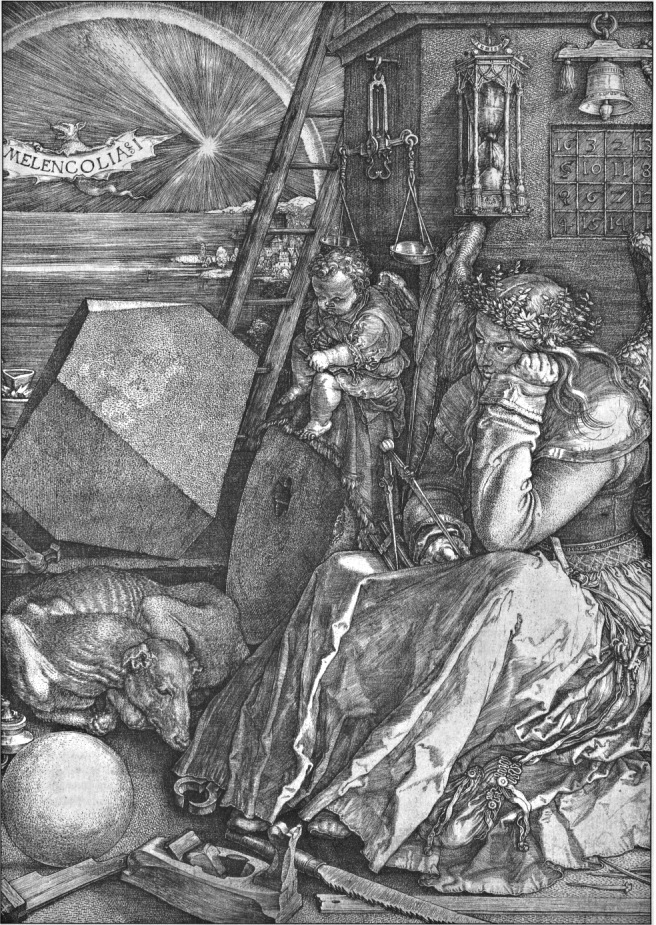 It could have been worse. (A total mis-use of Durer’s image of Melancholy)

So. Life for a woman in modern Italy may mean having to deal with more traditional gender roles than in North America, may mean always being the one doing the laundry; it may mean 50% unemployment and total inequality of pay, but just think: it was worse, much worse, 500 years ago.

This month, the Italy Blogging Roundtable tackles the difficult topic of ‘Women in Italy,’ and this time I have gotten out of the trap of having to write about a difficult topic that would result in me complaining about something I can’t do anything about. Rather, with this short survey of womens’ roles in the past, perhaps we can illuminate some of the sources of present gender roles in Italy.

Disclaimer: the following is not a scholarly paper nor does it contain proper citations or bibliography; rather it is intended as a somewhat sarcastic though thoroughly researched summary of the life of the Renaissance woman in my own words. Think of it as everything you’ve always wanted to know about life in the Renaissance in 1000 words or less.

Whose fault is it anyway?

Christian teaching had a lot to do with the way gender roles were constructed in Early Modern Italy, and unfortunately, women got the brunt of the deal in Genesis, marking us for centuries to come. The evil female serpent that tempted the weak woman resulted in expulsion from the Garden of Eden and the punishment that women would, from then on, bear children in pain and slave as mothers. 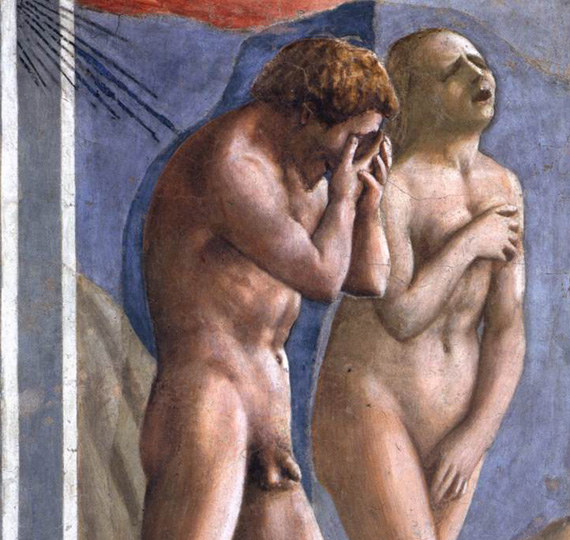 Detail of Masaccio’s Explusion of Adam and Eve

In the 2001 book Virtue and Beauty

, David Alan Brown remarks that the frequently represented images from Mary’s life – Annunciation, pregnancy, the Nativity, Madonna and Child, and finally the Lamentation – mirror society’s expectations for women and provide a model for their behaviour. The only difference is that most women were supposed to be married first! If we look at the lifecycle of women in this pre-modern period, she is at the height of her importance in her childbearing years, and everything revolves around this.

Most of what we know about women in Renaissance Italy comes from documents, paintings or other visual evidence that tell us much more about the patrician lifestyle than that of peasants. The lower classes are more often referred to incidentally or we know about their lives through records of institutions. Most of these documents and paintings are by the hand of men, so contain a certain dose of chauvenism that has to be interpreted to find a measured version of reality.

Documents do, however, correctly tell us facts like the average age of marriage. In Renaissance Florence, girls from nice families were usually married to a man of her family’s choice when she was about 16 years old and he might be going on 30, since he should already be established in business. The peasant classes tended to marry between subjects of about the same age who were permitted a certain amount of courting contact to ensure compatibility, since the priority here was a reliable working partner. 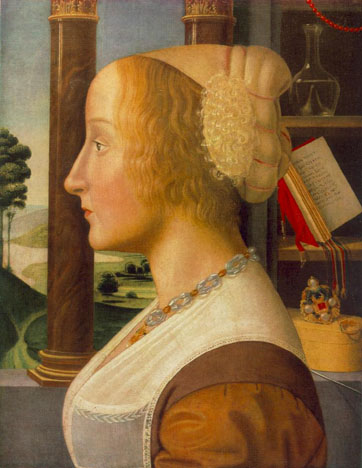 Amongst the wealthy, marriage was a business transaction. Her family paid a dowry to his, consisting of money and household objects (a chest full of linens and other items), while he usually gave her bethrothal jewelry before the big day – if you ever see a portrait of a young girl with an important necklace, that’s probably an image exchanged during bethrothal. The dowry that a woman brought into the marriage technically remained hers, but was put in the hands of the man for management. Rather often in this merchant society, a man married when he needed the influx of cash for a major commercial venture like a sailing to Asia, and rather often one reads of dowries lost in this way.

The actual wedding process in this period was not that of the modern church wedding but more of a domestic process of exchange, in which a ring exchanged at home did symbolize, as it does today, a promise. Processions and parties were just as important, as they spread word of the marriage to the whole neighbourhood or city. At the end of it all, the new couple was ushered into a bedroom and expected to perform, while in some cases the festivities continued next door – and in France, the man’s rowdy friends sang lewd songs below the window.

As mentioned above, patrician women were supposed to produce healthy male heirs – as many as possible, since many of them died young. Licinio’s portrait of a matriarch and her family, the youngest still in swaddling cloths, is a good way of imagining what this family should have looked like on a good day.

To help this result along, there was imagery that scholars believe might have been used to help envisage a happy outcome of a pregnancy, like painted birth trays that show naked little boys (below, one of my favourite exemplars from the Palazzo Davanzati). These were sometimes included in a woman’s dowry, or commissioned at marriage, rather than given as gifts after birth. 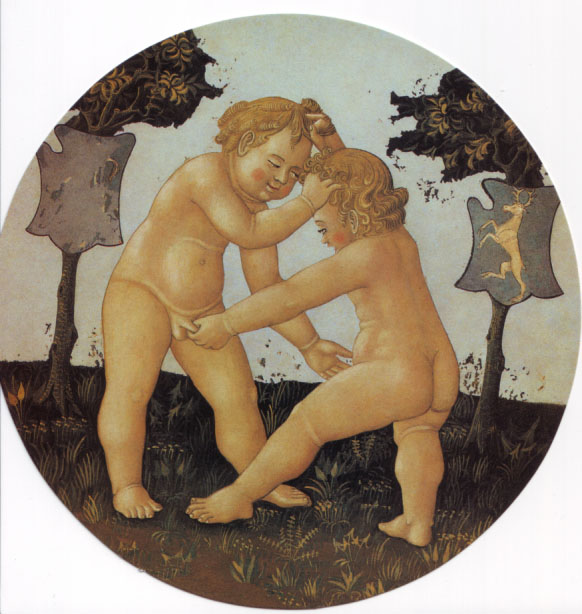 About childbirth and child raising there were as many written manuals then as there are today, including a series of interesting vernacular midwife manuals from the mid sixteenth century onwards that were, at least ideally, intended to also be perused by regular women (not just midwives). The birthing room was a woman’s domain. Birth took place on a horseshoe-shaped chair to help gravity do its job. Men stayed outside, at most consulting the stars to make sure the birth time is a lucky one as in the illustration below from 1583. After the birth, the woman stayed in bed for the laying in, visited by gift-bearing female neighbours. 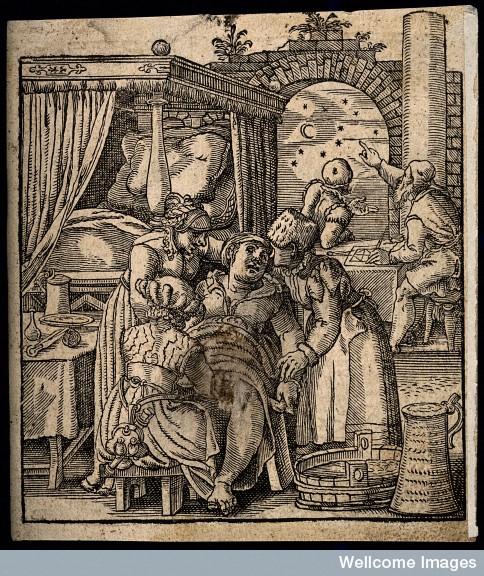 Sometimes, in images of birth scenes, one also sees the wetnurse, ready to take on the newly arrived babe. Nursing one’s own child was considered inappropriate for the upper classes, in part because it was believed (as some still believe now) that breastfeeding diminishes fertility, while these women had to get pregnant again as soon as possible. The practise of wetnursing (not to mention the presence of another young and attractive woman in the house) brought its own set of social problems that have been the subject of numerous articles. For families that could not afford an in-house nurse, children were sent out to the countryside for nursing and returned – if they survived – at weaning.

As you might imagine, taking care of the kids was up to mom (and her servants). Girls remained in her realm until marriage, docilely practising needlework, while little boys from the age of seven were abruptly removed from their mother’s care lest they end up effeminate, and given a strict formal education.

The rest of the time

When not overly pregnant or lying in, women were supposed to keep control of the household, which for a wealthy family meant tightly managing a budget and keeping staff honest and hard at work. Occasional complaints have come down to us of how hard it is to find good household help. Women actually had a large responsibility, and being a good household manager was a desired quality in a wife. With the husband often away for business – and sometimes in political exile – some women were also stand-ins for their husbands to a certain extent.

In the ideal sense, though, women were to stay home and do needlework; some also produced textiles in the home, spinning and weaving for the family’s needs or even beyond. Other time was intended to be spent praying using simple illustrated prayer books made specifically for women. Probably in reality more women spent time getting the massive fires going for cooking, and doing craploads of laundry for all those babies, even if servants were hired to do this. Only servants went to the market – proper ladies went out chaperoned only to church and to visit other ladies lying in, ensuring a good stream of visitors on these occasions which must have been a welcome time out to exchange gossip.

So. Although the role of women today, in Italy as anywhere else, is difficult, when I feel laden town by the pseudo-medieval laundry hanging process here or when I spend a day looking after the house, I try to be thankful that I married a modern man and live in a modern world. Had I been born in 1476 instead of 1976, would I have had the knowledge, courage, or even ability to go against the grain? to not have children, to choose my life? to be educated, highly?

On the real topic of what it is like to be a woman in Italy, we knights of the monthly Italy Roundtable have been planning to write for some time. Here’s our chance to read lots of female opinions on the matter. But lately the topic has also inspired two other Florentine bloggers, so I would like to name them honourary knights for this month and have linked their posts below, too.

For a scholarly bibliography of women and art, from a senior level university course I taught on the topic, see here.

For some nice general reading, try the following books that I have selected on Amazon.com as the best of scholar-written general public information on this topic: