The Most Royal Gifts: Bolognese Dogs in Painting

The very mention of “Bolognese” may rouse your appetite with thoughts of spaghetti sauce, that classic Italo-American comfort food, so it may surprise you to learn that Bolognese is also a noble breed of dog with a much older and far more distinguished provenance (or pedigree, pun intended) than the beloved sauce. 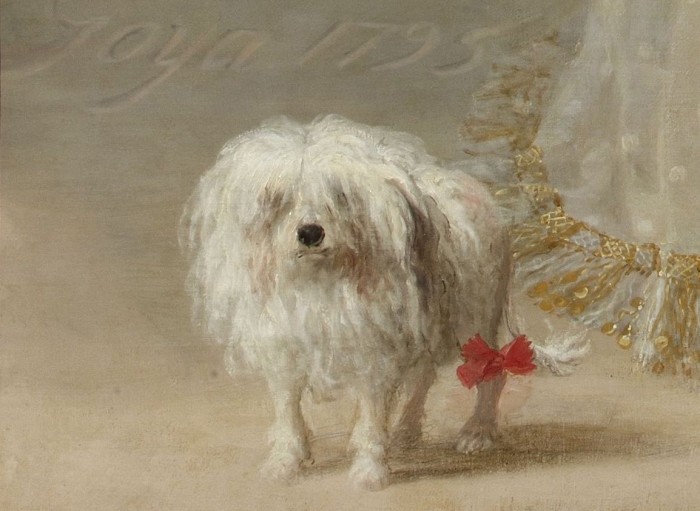 Detail of the dog in Goya’s painting “The White Dutchess”

Aristotle wrote of little dogs brought by boat, where they served as the ships’ mousers, by Maltese sailors to Magna Grecia, the name given by the Romans to the coastal areas of Southern Italy. Described as precious jewels, they were small, all white and wooly with tiny black noses and eyes. These were the early ancestors of the Bolognese and related breeds in the Bichon group. Italians, with their usual fashion-forward flair, “created” the bellissimo Bolognese breed with its particular not-curly, not-wavy, not-straight hair.  A Bolo’s hair, when long, is like a curly haired person’s coif on a very humid day – which isn’t usually attractive on a human, but on the Bolognese is captivating.

Bolognese Dogs in the Renaissance and Early Modern Europe 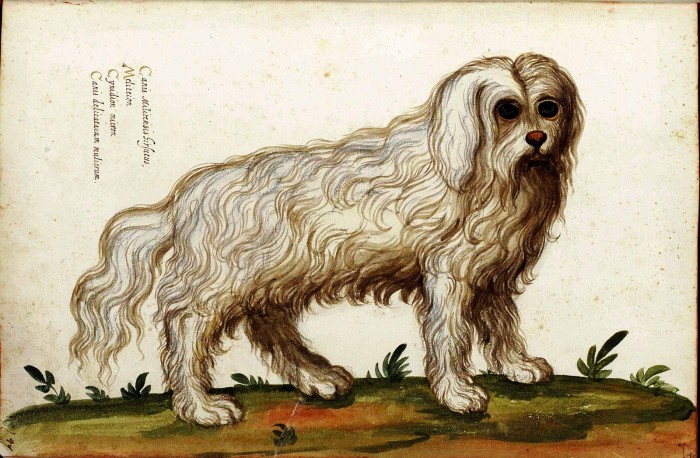 Hundreds of years later, the Bolognese would become the “it” dog among the European aristocracy from 15th to the early 19th century. Their eager, joyful temperaments made them favorite, pampered companions in the royal households where they warmed the hearts and laps of many a mighty ruler.

The Bolo “trend” began in Renaissance Italy. Italian nobility took great pride in the Bolognese and popularized the breed by giving puppies as gifts to esteemed visitors and other royal families throughout the Italian states and Europe. Both the Gonzagas and Medicis bred them. Cosimo de Medici (1389–1464) took eight Bolognese to Brussels as gifts for Belgian noblemen. Duke Alfonso II d’Este of Ferrara (1533–1597) gave a pair to King Phillip II of Spain (1527–1598) as a gift and was reportedly thanked by the king who wrote, “These two little dogs are the most royal gifts one can make to an emperor.”

Playful little Bolos were considered not only regal but also a symbol of wealth and privilege. Many high–born ladies considered the Bolognese a de rigueur fashion accessory, a precious canine jewel to be spoiled, powdered and perfumed.

The love for the breed spread from Italy into Spain, Austria and Russia.  Queen Maria Therese, the Empress of Austria (1717–1780) and mother of Marie Antoinette, adored her little Bolognese so much that after its death she hired a taxidermist to preserve and mount its body, which now can viewed at the National Museum of History in Vienna.

Other famous Bolognese “parents” were Leonardo Da Vinci (1452–1519), Madame de Pompadour (1721–1764) and Czarina Catherine the Great (1729–1796); this latter German princess was so attached to her piccolo Bolos that she would carry them in her bosom and in the sleeves of her coat.

Given the Bolos’ popularity within the courts of Europe, it is not at surprising that they made their debut in the art world in portraiture, immortalized by the side of some of their adoring masters.

The Bolognese in Paintings 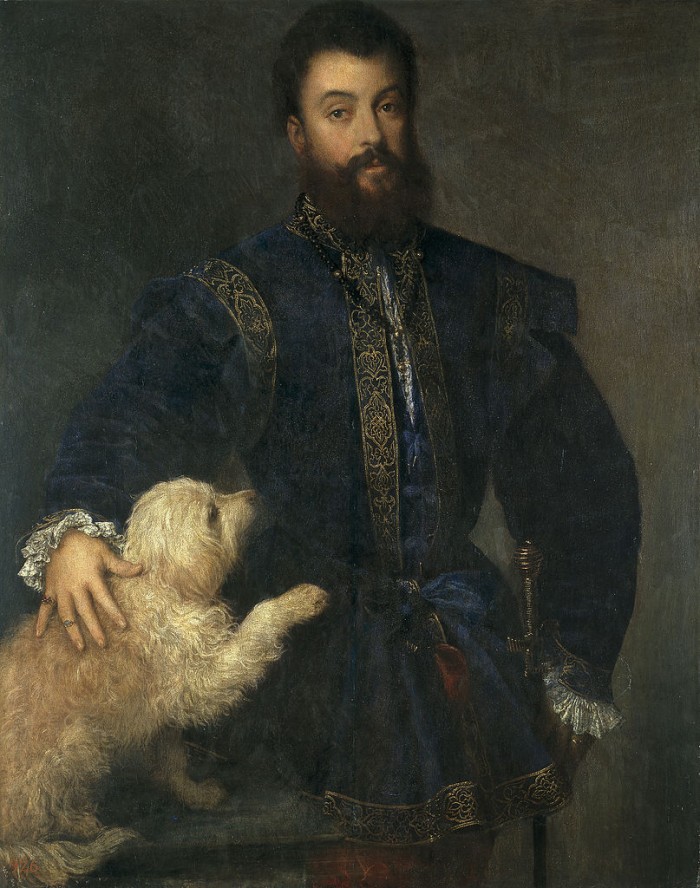 Federico Gonzaga, the Marquis (the later Duke) of Mantua (1500–1540), son of Isabella d’Este, was painted by Titian in 1529. In Portrait of Federico II Gonzaga (displayed in the Museo del Prado, Madrid) Federico is depicted caressing his faithful Bolognese by his left side. While small dogs were more often symbols of fidelity for their female owners, the Prado’s website indicates that this portrait “has been related to Federico’s matrimonial intentions in 1529 and the need to whitewash his dissolute past. The portrait, in which he is shown as affable and pious while retaining his aristocratic dignity, would thus form part of this strategy, which was brought to a successful conclusion with his marriage in 1531 to Margherita Paleologa, heiress of the Marquis of Monferrato.”

Titian, Venus and Cupid with Organist and dog, Berlin

In another painting by Titian, the Gemaldegalerie (Berlin) Venus and Cupid with Organist and dog (1548-49,) we find a little Bolognese to the right of the reclining Venus, this time depicted as the frisky companion to the goddess of love. The dog seems almost added here, if we compare it to other dog-free versions of the same painting. The Prado also has a version with a different kind of dog (a small brown one). What might have motivated these variants? Perhaps a patron’s request? 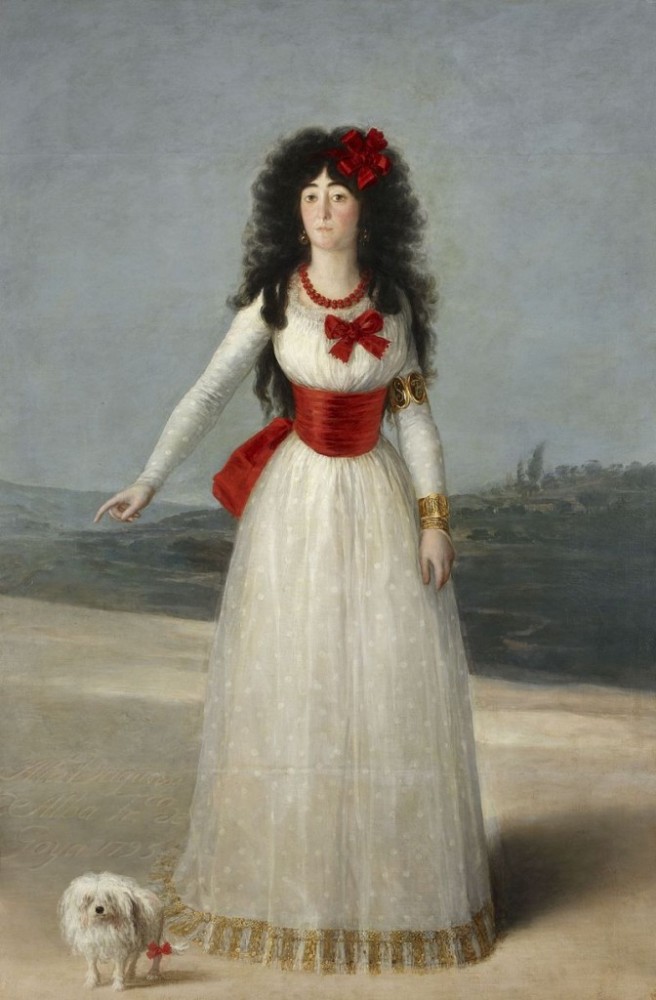 In Spain, another little Bolognese was immortalized by Francisco de Goya in 1795.  The highly positioned and well regarded Spanish aristocrat Doña María del Pilar Teresa Cayetana de Silva-Álvarez de Toledo y Silva Bazán, the 13th Duchess of Alba de Tormes, Grandee of Spain (1762–1802) was the subject of the life-sized portrait known as The White Duchess. She is dressed in a white flowing gown hemmed with gold embroidery and is elegantly adorned with pearl earrings, a dramatic red sash, red beads and red ribbons on her chest and in her hair. Charmingly, her coiffured Bolognese dons a matching red ribbon on one of its hind legs. Evident in this neo-classical masterpiece is the curious phenomenon of the canine mini-me which one can observe in most any park today. The good Duchess’s frizzy hair also rivals that of her dog.

Bolognese are also depicted in works by French painters Gosse and Watteau, as well as in 17th century Flemish tapestries. Venetian painter Vittore Carpaccio (1465–1526), known for his renderings of ceremonial processions, pageants and large scale public gatherings, his eye for detail, and his inexhaustible taste for pictorial anecdote, features a Bolognese accompanying his master in a gondola in the Miracle of the Cross at the Ponte di Rialto (1496) displayed at the Gallerie dell’Accademia in Venice. 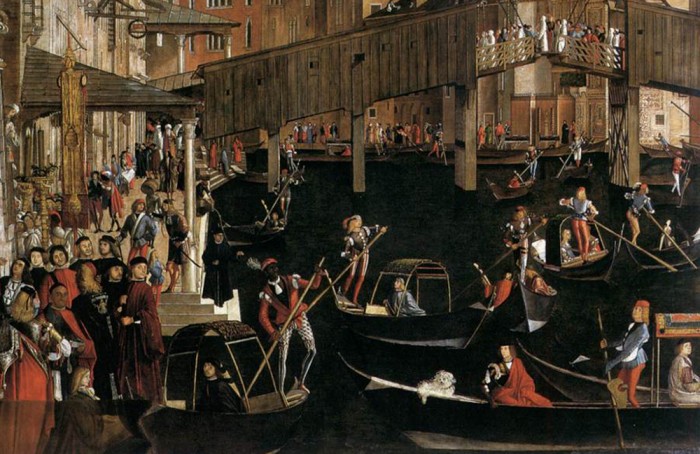 With the decline of the aristocracy in the 19th and 20th centuries, so declined the Bolognese, and by WWII the little Bolo nearly become extinct. It was saved by a small group of dedicated breeders in Italy and Belgium. Today Bolognese remain rare and are awaiting full recognition as a distinct breed by the American Kennel Club, currently registered as “foundation stock.” It is estimated that there are fewer than a thousand Bolognese in the United States and they also are scarce in their Italian homeland. If you feel you must have one and cannot easily find a breeder, you can always select a Bichon Frisé—the breed most closely related to the Bolognese—as an adorable and energetic consolation prize!

About the author and her book

This text is an art historical expansion of a chapter from the author’s book: Carla Gambescia is the author of La Dolce Vita University: An Unconventional Guide to Italian Culture from A to Z, an “edu-taining” celebration of Italian culture consisting of 165 mini-essays spanning topics from food & wine to art & art history, architecture, antiquity, literature, film, style and more. Charmingly illustrated throughout, LDVU is great for armchair and actual travel to “the Boot” thanks to its Travelers’ Topic Index.

Carla Gambescia’s passion for Italy began early – with her mother’s love of the Renaissance masters and her father’s discourses on Italian geniuses of every calling. Biking around Italy and eating gelato are her favorite hobbies. She is the author of the book "La Dolce Vita University: An Insider’s Guide to Italian Culture from A to Z".