The current economic crisis is not the first time that Italian middle class families have been unable to afford their previously comfortable lifestyles. Back in the Renaissance, before the services rendered by the modern socialist state, the “new poor” could rely on the services of a lay charitable institution to help them with the essentials of life and death – being clothed, helped when sick, and buried when dead. This institution, whose home base in Florence can be visited for free, was called the Confraternity of the Buonomini di San Martino; Buonomini literally translates as “good men”. So basically, “when you find yourself in times of trouble…” call “A few good men”. 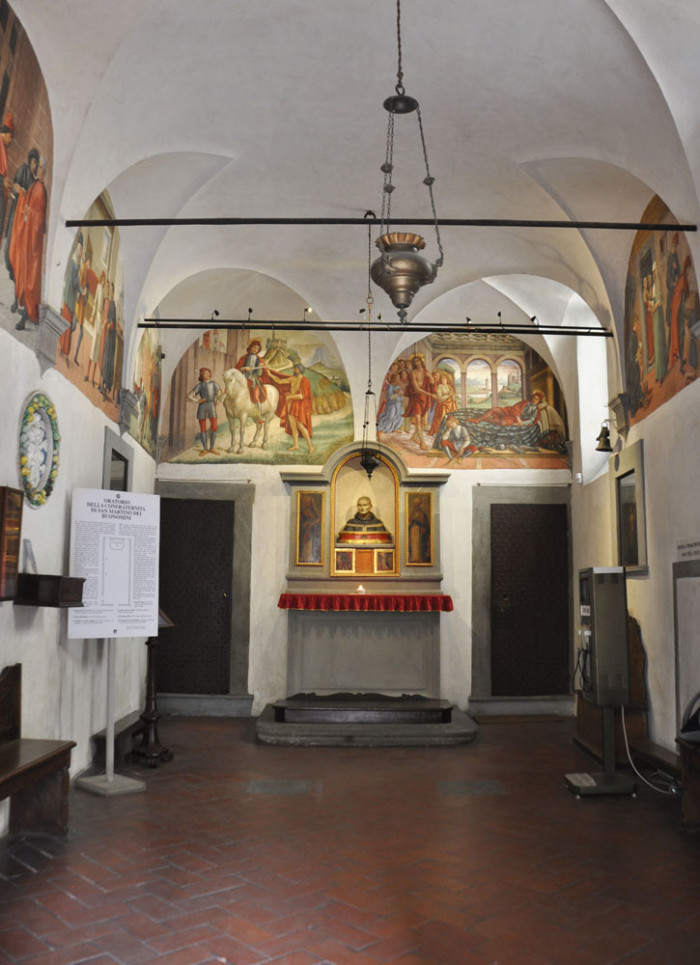 14th-century Florence saw the rise of Confraternities, defined as voluntary associations of lay people who gathered either to pray together (called Laudesi) or to perform specific charitable works. In the 15th century most Florentine men in good families were part of one of these associations; they paid to take part, but benefited from social advantages both in terms of contact with other good families and from the support net offered to members, such as burial arrangements and care for widows.

The Buonomini was a slightly different kind of confraternity than many of the others that usually constituted large groups because it was initiated with a limited number of twelve good men, and eventually six assistants. In the mid 15th century, numerous families in Florence fell on hard times. Previously wealthy people were unable to keep up their image due most often to falling on the wrong side of the political fence, though also due to bad investments (like a lost ship on a merchant expedition), famine, untimely death etc. They were given a specific name: the shamefaced poor. In 1442, Fra Antonino Pierozzi (who later became Archbishop of Florence and a saint) recognized the need for a dignified way to help these people, who tried to “keep up appearances”. He chose 12 reliable men of the higher social classes who would identify those in need of help and discreetly offer assistance in whatever way was required. The group initially met at one of their houses, but eventually was given a room off the side of a church (San Martino del Vescovo), which was decorated as their “oratory”. 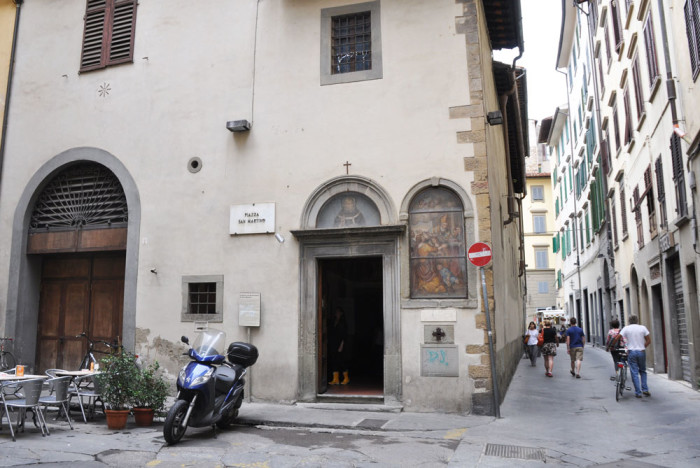 Outside of the modest oratory

Saint Martin of Tours is the saint most often associated with charity because he divided his cloak in two halves to share it with a beggar he encountered outside the city gates of Amiens. In the Buonomini’s oratory, the saint is represented in two frescoed lunettes, while eight further lunettes quite accurately represent the various works of these charitable men. We also have an extensive archive that documents their actions, as well as holds numerous family accounts and memoirs, making this institution an important piece in the puzzle of understanding social life in Renaissance Florence. 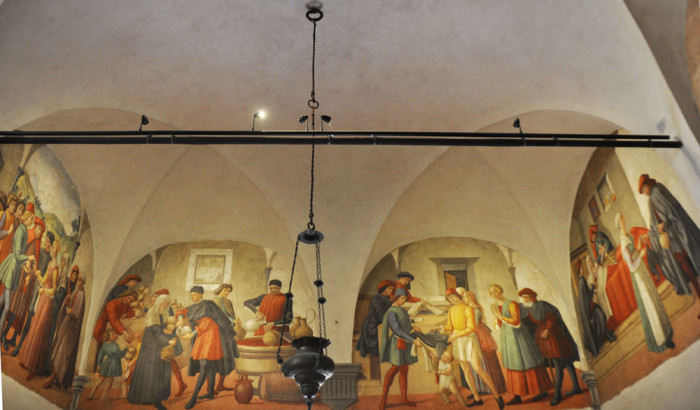 The lunettes are painted by an unknown artist in the school of Domenico Ghirlandaio in the early 1480s and are in a similar style to, though a bit simpler than, the frescoes in the high chapel of the church of Santa Maria Novella (where the hand of the master is certainly more present). In the various scenes, we see men dressed in red robes and black cloaks that identify the Buonomini. Above the entrance door you see them distributing wine and clothing to the needy. In both cases someone is industriously taking notes at a table in the background. 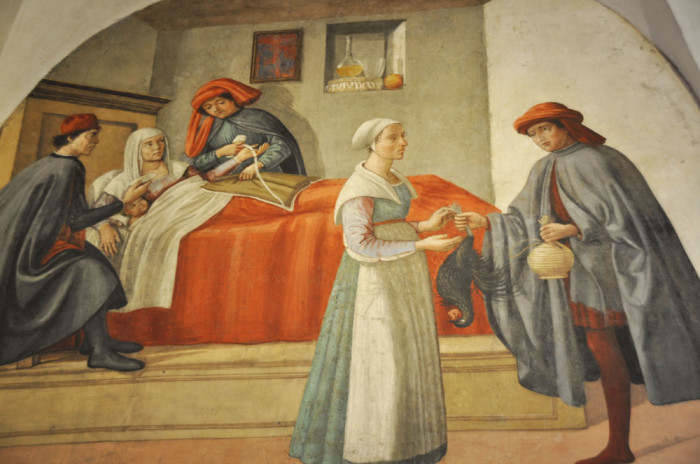 In another fresco we see the good men visiting a mother lying in with her newborn. Although the room is furnished in the patrician style, apparently she needs help to purchase a good chicken and stiff drink required of every new mom. Perhaps the Buonomini were also paying for her wetnurse (since wealthy women in this period did not nurse their own babies). 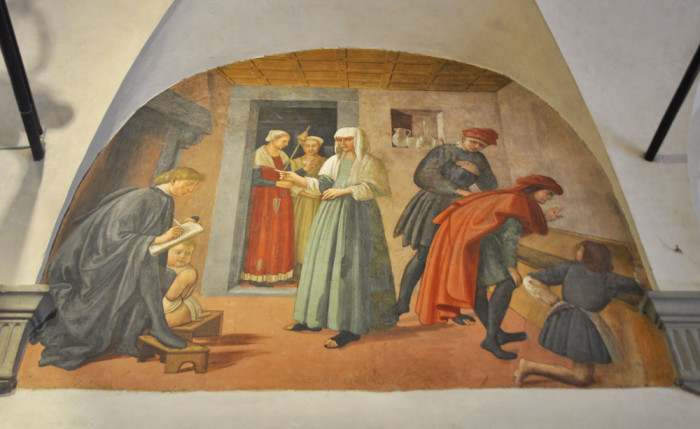 The volunteers also helped families with burial ritual and costs, and assisted widows who were unable to continue the household without a paterfamilias. In the fresco above, we see two Buonomini and their assistant in the house of a widow (center) whose household only includes young boys and other women (busy with household tasks like spinning). The confraternity is taking inventory of their possessions – something that comes in handy to historians – in order to perhaps help her sell things, but also identify what charity they might give. 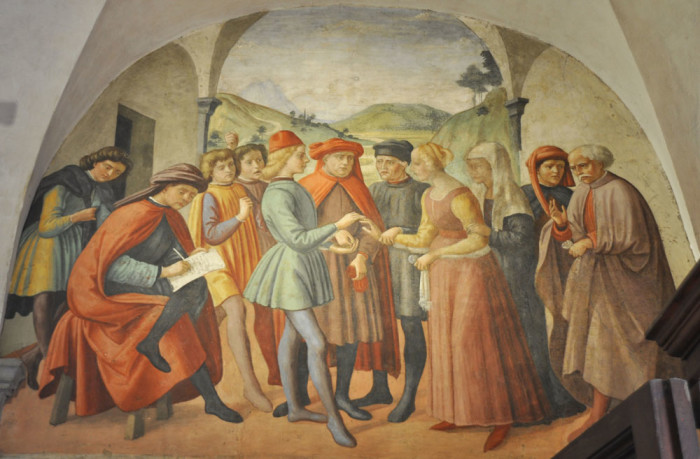 Finally, marriage is another, happier moment that the Buonomini helped with. In order for a woman to get married in this period, she needed to be provided with a dowry which was given to the new husband. The Buonomini provided these dowries for young women who could not afford them. In the fresco above, the humble girl marries a boy who is well dressed, indicating that a “shamefaced poor” girl might be given a chance to move up in society through marriage thanks to the little money bag that the Buonomino is handing discreetly to the groom.

This confraternity is one of the very few remaining visible examples in Florence (another is the Misericordia, still today the city’s ambulance service), and it’s also a real treat for visitors as a nicely preserved and free bit of history located right downtown. If you’re interested in reading more about charity in Renaissance Florence, see also my article about infant abandonment and the social function of the Ospedale degli Innocenti.

Piazza San Martino (off via Dante Alighieri)
Open Monday through Friday, 10-12 and 15-17, closed Friday afternoons and weekends.
Free, though there is a charity box and it’s nice to give what you can.

An absolutely excellent little book detailing the historical archive and the story of the frescoes, published in 2001, is available for sale from the custodian and provides much of the information in this blog post.