Where to see Contemporary Art in Italy 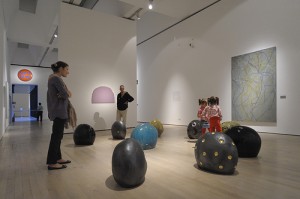 A family interacts with art at the MART in Rovereto. Photo: MART used by permission.

Italy is not known for its contemporary art – at least not lately, and not in Italy itself. Recently a Tripadvisor member posted a question about where to see contemporary art in Tuscany and Italy and I realized that I’d never summarized it all in one post.

There was an interesting article in the New York Times in 2008 about how stalled the Contemporary art scene is here thanks to a lack of a larger organizational structure for it – as well as a lack of funding and in general of interest. While in recent years we’ve seen the openings of more structures for contemporary art, and some move on the part of regional or local governments in the encouragement of the arts (I’ve observed this here in Florence), the overall scene still lacks coordination. One problem is a lack of attention to arts marketing (I blog about that too) even at it’s most basic form like a list or calendar of what’s on.

Leaving reasons aside for the moment, given that nobody else has done it, I want to create a working list of contemporary art museums and large galleries that might be of interest to the common visitor. I’m not going to list every single art gallery but only those that I’d personally feel comfortable entering. To supplement what I could gather on my own, I consulted Luca Melchionna — he works in communications at the MART and is a freelance journalist whose opinions on contemporary art I respect very much.

Florence – The Strozzina inside Palazzo Strozzi is your best bet for a good contemporary art exhibit in this city. The rotating exhibits are usually related to the theme being explored in the larger space upstairs. Strozzina brings an international touch to the city, often with emerging or established artists from Germany, the USA, and elsewhere. Weekly talks inside the space (in Italian) are part of it’s outreach to the city.

Prato – the Centro Pecci opened 15 years ago and has offered good quality temporary rotating exhibits since that time. Now it’s undergoing a massive expansion scheme that will make it THE reference center for contemporary art in Tuscany. The new spaces will permit the exhibition of the permanent collection. The expected date of 2012 has been extended to 2013 and I expect it to be extended again (update, Feb 2014: the completion date is no nearer). Parts of this collection have been traveling worldwide, especially to China, as part of an innovative scheme to make Italian contemporary art known abroad.

Pistoia – In this smallish town, Palazzo Fabroni has some pretty innovative exhibits, but it’s hard to find out what’s on since it doesn’t have a dedicated website. As I occasionally receive their press releases, your best bet is to check my list of what’s on in Tuscany.

San Gimignano – this super touristy town has some of the best contemporary art in this part of Italy at Galleria Continua (which also has branches in Beijing and France and is a regular lender to exhibits Italy-wide). Their artist roster includes important international artists like Chen Zhen, Kendell Geers, Anish Kapoor, and Subodh Gupta.

Lucca – The Lu.C.C.a. (Lucca Center for Contemporary Art) offers rotating exhibits of varying quality. The main gallery shows better known artists while the Lounge and basement areas have emerging artists or very small exhibits, with the bonus being that these are usually free. There is also a cafe in this space.

Luca adds: “One curious thing about Tuscany is the concentration of galleries, some of them rather good (Enrico Astuni, Barbara Paci), in Marina di Pietrasanta.” Also the area in and around Carrara – thanks to its marble – hosts a lot of sculptors, especially during its Biennale, which Luca says “under a new director (Fabio Cavallucci), the Biennale opened itself to contemporary sculpture”. 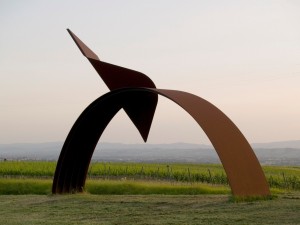 Arttrav’s guest writer Rebecca in Umbria has written an excellent post about contemporary art in Umbria in which she mentions some of the following locations:

Palazzo Lucarini Contemporary is the permanent space developed out of the Flash art fair in Trevi.

Scultori a Brufa is a series of sculptures installed in the landscape near this tiny hamlet.

The brand-new CIAC Museum in Foligno opened in 2010.

When you are in Rome, check out the two new spaces MACRO and MAXXI:

MAXXI – Opened May 30th 2010. Controversy still surrounds the design of the building by architect Zaha Hadid, but one thing’s for sure: there is a new, international feeling in and around this building. Personally, I found the architecture tiring and disorienting and the content poor (I think they ran out of money during construction and forgot to buy art.). For my slightly more polite impressions see my review “MAXXI-mum space in Rome” on illywords blog.

The new MACRO is an expansion project with a new building by Odile Decq that just finally opened fully at the start of December 2010 (it’s been in the making since 2001). Part of the city museums of Rome, it usually offers about 5-6 exhibitions at once across its two locations in Rome. NB there is also a branch of the macro at Testaccio.

The Gagosian Gallery is apparently one of the most innovative in Rome (perhaps in Italy?), known for displaying large-scale projects. Their artist roster is impressive and includes some artists of international standing, such as Jannis Kounellis or Cy Twombly, who have lived or do live in Rome. The gallery has branches in New York and Geneva, and just now (Feb 2011) is inaugurating its Hong Kong branch with an exhibition by Damien Hirst.

And Buzz-in-rome adds (from the comments below): the exhibitions of Galleria Nazionale d’Arte Moderna, Museo Carlo Bilotti and the private gallery Edieuropa

My personal knowledge of the Milanese art scene is… zero! So this part relies totally on tips from Luca, who says he’s probably forgetting a lot. But I’d say this is a good place to start.

The new Museo del Novecento (20th century art) just opened in Piazza Duomo [editor’s note: Arttrav will be visiting and reporting on that in 2 weeks.]

The leading galleries in Milan are:

We should also note the non-profit Via Farini which has exhibitions, artists workshops and other programmes to support emerging artists.

Naples: Galleria Lia Rumma (A Milan branch opened recently too) has an important roster of international artists including Marina Abramovic.

Naples MADRE – this amazing contemporary museum currently risks closing for lack of funds (click the photo above to sign a petition to save it). This museum has a strong permanent collection with an amazing virtual tour narrated in english, and has hosted temporary exhibits by literally ALL the most important contemporary artists.

Matera: MUSMA – I haven’t seen it myself but a friend of mine (who runs a small museum in the States) says it’s one of the best contemporary sculpture museums she’s seen. Right there in a prehistoric town!

The real contemporary art scene in Italy takes place north of center where industrial riches have combined with social responsibility.

Bologna: MAMBO – 9500 square meters of exhibition space with a permanent collection and some rotating shows. Particularly useful is the section “Focus on Contemporary Italian Artists” from Arte Povera to now. (www.mambo-bologna.org)

MART – Trentino and Rovereto. The main building of this two-sided contemporary art museum is in the smallish (and boring!) town of Rovereto. It’s building by Mario Botta is an attraction unto itself. Inside, find the permanent collection as well as a few rotating exhibits. One of the few museums in Italy to have a cafeteria and bookshop (american-style!) as well as a good education department.

Luca M. also recommends Museion Bolzano, the museum of modern and contemporary art in Bolzano (which is about as far North as you can get in Italy). They have temporary exhibitions on rotation. 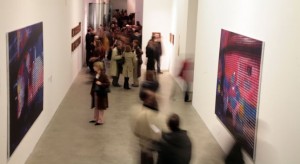 Biella: Citta dell’Arte – The Foundation established by Michelangelo Pistoletto in Biella just north of Torino is both exhibition space and creative workshop (www.cittadellarte.it)

Fabio Paris Gallery in Brescia is THE place in Italy for the digital art scene.

Torino: Fondazione Re Rebaudengo – Opened in Turin in 1995 by contemporary art collector Patrizia Sandretto Re Rebaudengo and with the collaboration of curator/critic Francesco Bonami, the foundation has a strong mission that combines exhibition and education.

Torino: Castello di Rivoli Museum of Contemporary Art – An ancient medieval castle is the perfect place to house a permanent collection (opened 1984) and exhibitions of contemporary art, no?

Throughout the course of the year there are high points in Italy’s art scene, fairs that last a few days to a few weeks that demonstrate the country’s ability to innovate on a global level. These are:

Contemporary Art Day – not a fair but a country-wide day dedicated to the contemporary arts in October, during which access to all contemporary museums and galleries should be free, and some special events are planned.