The Lady Who Paints from Bunker Film on Vimeo.

18th-century painter Violante Siriès Cerroti was a leading Rococco painter in Florence. She made a copy of an altarpiece by Luca Giordano in the Church of Santa Maria Maddalena de’ Pazzi for the same church’s sacristy, indicating that the subject matter was particularly important to the nuns who resided there. Considered a masterpiece of female devotion, the work was highly damaged by the Florence flood of 1966, of which we are celebrating the 50th anniversary in November 2016. Now, the Advancing Women Artists Foundation has sponsored a two year restoration of the work, returning it to its previous glory, which one can see in a beautiful short documentary film (shown here). 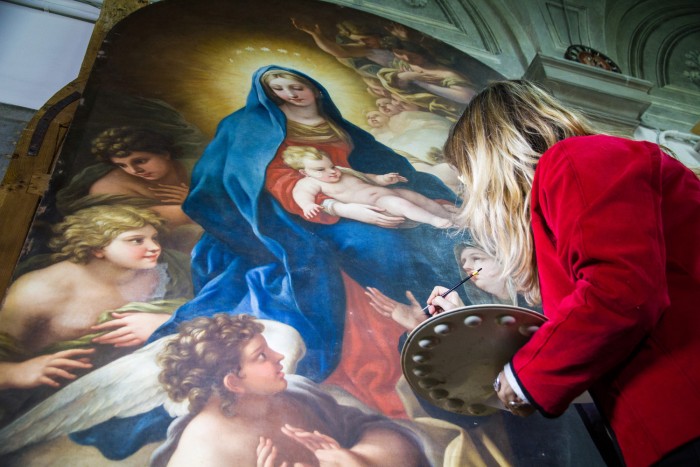 Restorers at work on Violante’s painting

Violante Siriès Cerroti’s masterwork miraculously survived being immersed in mud when Florence’s 1966 flood ravaged the city, destroying over 14,000 works of art. The painting needed restoration, but no one knew how much until the restorers removed it from its niche fifty years after the disaster. Restorers discovered that the receding flood waters left extreme humidity in the church’s walls, creating a perfect breeding ground for mold and causing unforeseen damage to the painting’s niche. “I have never seen such an extensive mold attack on a painting,” exclaims restorer Dr. Elizabeth Wicks, who together with Nicoletta Fontani, carried out the restoration, funded by the Advancing Women Artists Foundation and Dr. Jane Fortune. “Mold had eaten away at the canvas size and ground layers and large areas of paint were separated from the canvas and risked flaking. Over two- thirds of the plaster wall hidden behind the painting had crumbled.” The documentary shows the process by which restorers removed the mold and consolidated the painting. 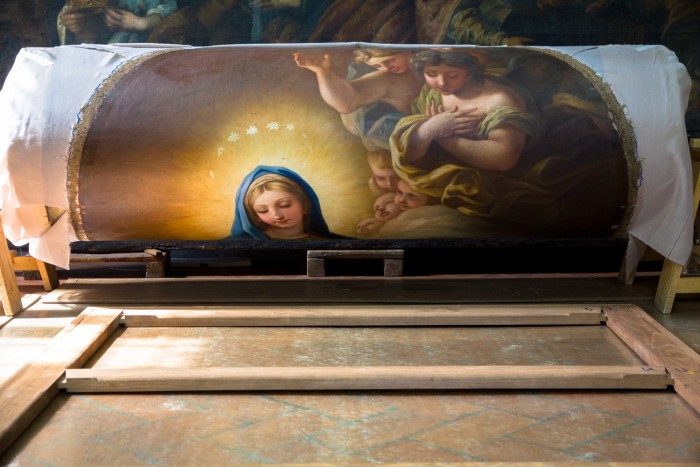 Violante Siriès Cerroti (1709-1783) , a leading paintress of her day, flourished in eighteenth-century Florence, where she worked as an esteemed portraitist for Tuscany dynasties such as the Gondi and Sandedoni families. Having studied in Paris with Rococo masters Rigaud and Boucher she was in high demand with Tuscan nobles and wealthy Grand Tour Travelers. Violante’s father Louis Siriès was fundamental in generating these commissions. Louis was a French engraver, who revolutionized decorative stone work as Director of the Tuscan Grand Dukes’ Semi precious stone workshop in the Uffizi.

An early student of Medici Court artist Giovanna Fratellini, Siriès Cerroti was a teacher of other professional painters including Anna Piattoli and Maria Hadfield Cosway. Their creative circle helped establish Florence as a center for women in the arts. Each were honored with membership to Europe’s first drawing academy, the Accademia delle Arti del Disegno, an otherwise male prerogative. 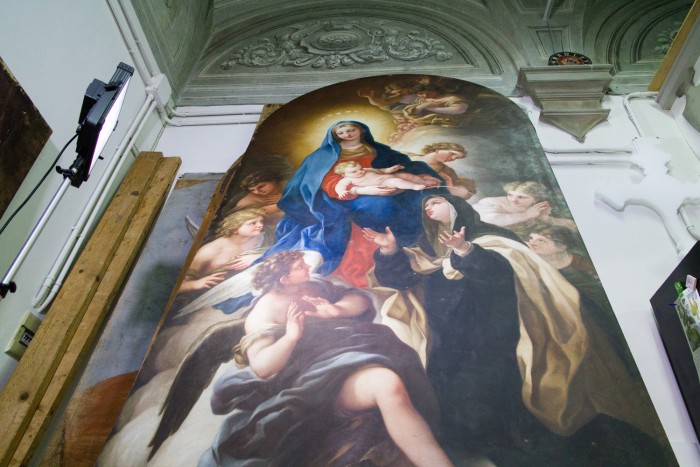 “Violante was the first woman granted permission to copy at the Uffizi Gallery, shortly after it first opened in 1770. In the eighteenth century, copying was not only a source of training for artists, it was also a common commercial practice,” explains AWA research Poiret Masse. “[At this time,] copies were not perceived as slavish imitations of an original. Violante’s painting is a great example. When compared with Giordano’s work, it has its own integrity.”

The Virgin Mary Presents the Baby Jesus to Santa Maria Maddalena de’ Pazzi resides in the sacristy of the church of Santa Maria Maddalena de’ Pazzi, an exquisite example of Baroque architecture in the center of Florence. It honors the miraculous visions of a local Florentine saint and is a magnificent copy of Luca Giordano’s earlier work in the church’s main chapel. Painted in 1767, it represents one of Florence’s very few examples of a large-scale devotional canvas by a woman.

“The painting has now been placed in its original restored frame, and has finally returned to its fully restored niche. By salvaging Violante’s art we are hoping to restore her story,” says Dr. Jane Fortune, AWA’s founder and Chairman. “She was hugely successful in her lifetime and has been virtually forgotten. And Violante is not alone. Thousands of invisible works by women artists are languishing in storage in Italy, waiting for a space of their own. The ultimate goal is to give these artists a voice in history.” Fortune hopes that this restoration will bring to light this plight and help find donors interested in helping. She has already identified other works by Violante (as well as by other female artists) in need of restoration, such as a unique image of the Madonna reading, located at the Benedictine Monastery of San Lorenzo al Monte, just outside of Florence.