Katy Perry and her Instagram of the David: smut, contextualized

Ever since state museums in Italy began permitting photography last summer, I’ve been keeping close tabs on what people photograph in the Uffizi and the Accademia (summing up part of this research at the three month mark here). So it came as no surprise to me that when Katy Perry visited Florence in the last few days, she took the obligatory selfies in front of the most important works: Botticelli’s Birth of Venus, and Michelangelo’s David. In the first, she and her assistant make silly faces (why, I wonder?), and in the second, she plays into a much abused trope: gesturing to David’s penis. 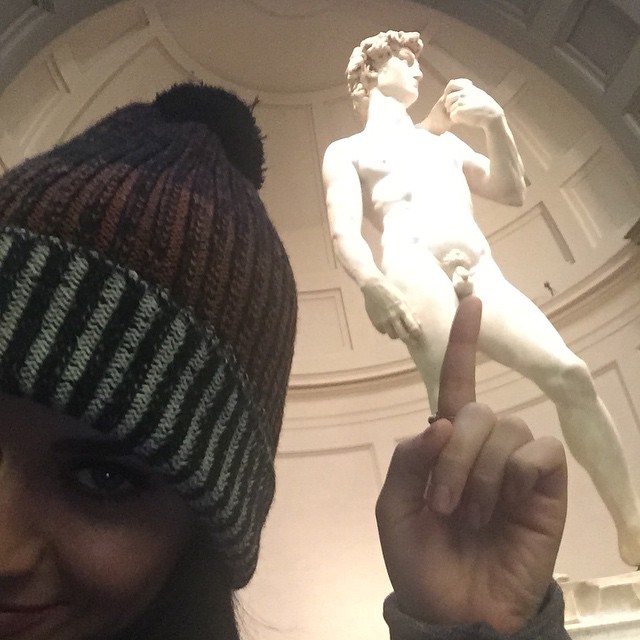 Reactions to the photo on social media have ranged from appreciation of the promotion of our tourism in Italy, passing through giggles for the cheesy humour, to downright indignant comments. Champions of this city’s culture on this Facebook post that I put on The Florentine embody the latter.

I beg to put the photo into context.

I am not a particular fan of Katy Perry, and don’t know much about the girl, but what she has done mimics and is in line with what hundreds of thousands of tourists from numerous countries around the world have done in the same location. To me, she’s demonstrating that she is relatively average.

Statistically, if we look at photos on Instagram that are geolocalized “Galleria dell’Accademia,” about 90 percent are photos of the David. Of these, about one in every five is a selfie with him, and every few selfies, we see a person either gesturing to or pinching the penis. Variants include cupping the genitals, pointing to the rear end, or putting a finger up the rear end. Perry is doing what a good ten percent of the population spontaneously does in front of this statue, and nobody is up in arms about those photos. Did she also pause to appreciate it? Probably (she’s been known to visit museums before), but she has an image to keep up with her fans – the bad girl doing stupid things (as for what she did with the Leaning Tower of Pisa, well, that’s going too far). 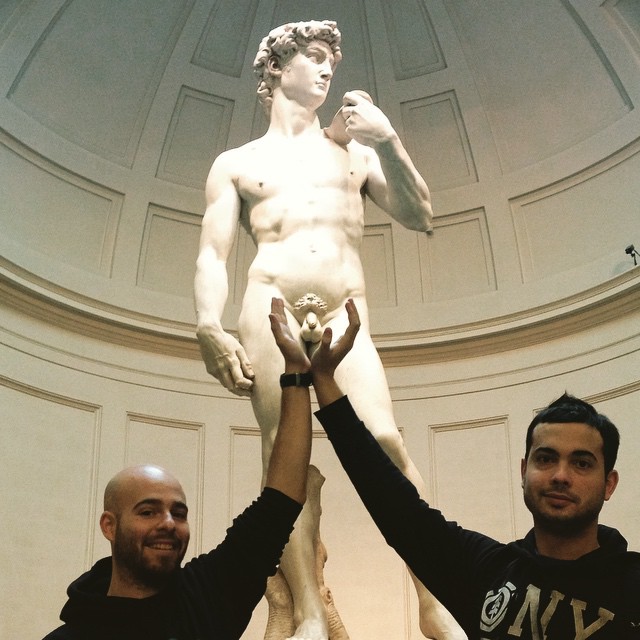 Instagram user @basinou – I give these Erasmus students the prize for most original use of this pose.

From the point of view of an art historian, I find this photo a fascinating contribution to my ongoing observation of how people look at art, and what they choose to share about that experience. In a conversation with Victor Coonin, author of a book about Michelangelo’s David, and a group of licensed tour guides to Florence, the guides admitted that one of the most frequent questions that people have regard the statue’s modest endowment and lack of circumcision. This, and the sexuality of the David in general, is amply addressed in Coonin’s book. The professor justifies the small genitals as a mark of the biblical figure being in control of his own urges, in contrast to contemporary images of satyrs and other figures representing “evil” sexuality. This is a valid question. It’s something that surprises many viewers; some say nothing, others comment on it privately, others, still, share it on Instagram, now that this format is available to us. 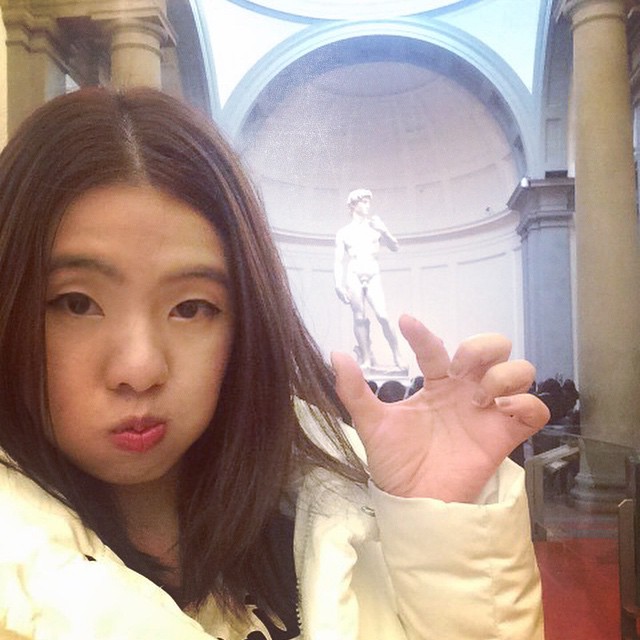 Instagram user @minimiiko – Not just an American pastime, this Japanese tourist also plays with perspective in the gallery.

Perry is hardly “keeping it classy” by gesturing to the masterpiece’s private parts. With the photo garnering half a million “likes” in a few hours, it’s true that she sets a bad example, and we don’t condone that. On the other hand, digital marketing expert Gabriele Granato eloquently argues on Facebook that “good communication means getting a clear message across to the right people. These photos perfectly hit the target of a tourism campaign: young foreigners who don’t know the beauties of our country.” Granato jokes about making Perry Minister of Tourism. 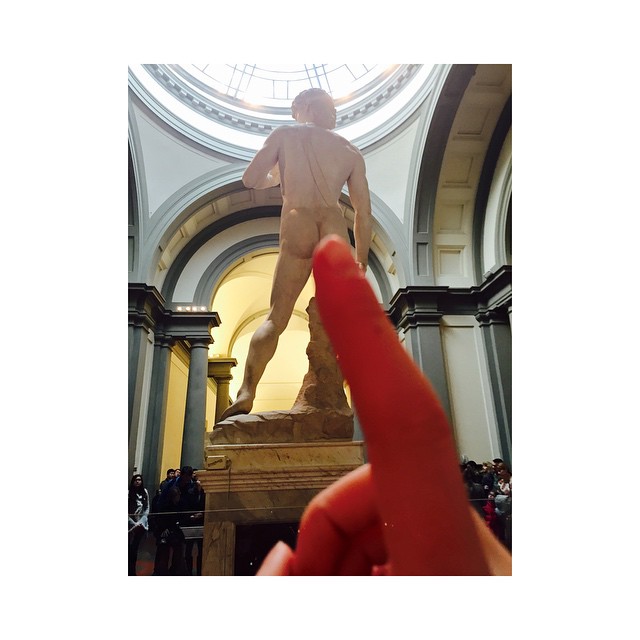 Instagram @brittneyaland | This user means no disrespect, and had me laughing out loud. She says shes “still in awe of the David”.

Museum-going is evolving, whether we like it or not, and photography in museums is part of this. Recent research on the motivation behind museum visits in the United States cites socializing and “experience” before the actual art. When traveling, for many people, museums represent ticks on a bucket list. Photography and the phenomenon of “museum selfies” brings this social experience to social media, allowing people to share declarations of “we were here” with friends afar. Perry is to be commended for ticking the Uffizi and the Accademia off her list (during regular opening hours for tourists, without special privileges) while also ticking off a number of Italy-lovers through her crass photography. Yet her tasteless photos reflect and mimic the thoughts and actions of numerous visitors; it’s hardly worth a scandal.

UPDATE: With thanks to Michiel of Minor Sights for bringing up an interesting issue, that of museum photography in itself, I’d like to point out a few references for further reading: