Laura Morelli has recently published The Giant, a book that, ostensibly, tells the tale of the creation of Michelangelo’s David. But it’s also the story of Jacopo Torni, a much less famous painter who was known to be friends with Il Divino – that’s the part I actually find more interesting. The Florence inhabited by the two artists and their many colleagues comes alive through the thoughtful and informed descriptions by Morelli, who has a PhD in art history from Yale and has already written numerous books set in this period. As a long time Twitter acquaintance, this latest book seemed the perfect excuse to get to know both the author and her writing. Rather than ask her about The Giant – which I recommend you read! – I wanted to talk to her about writing historical fiction, a task I find both daunting and fascinating. 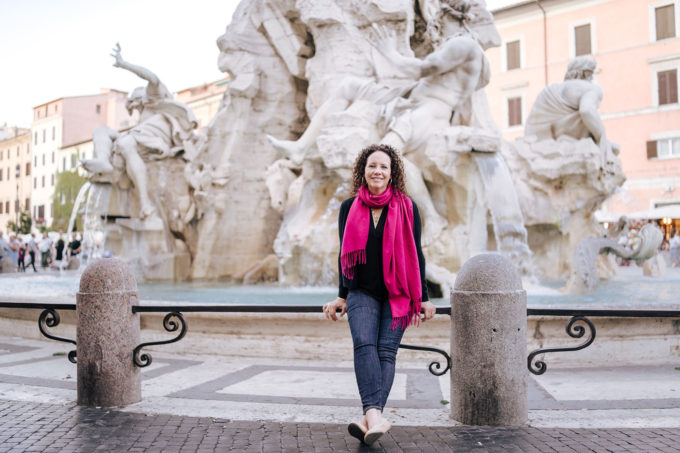 Alexandra Korey: We have in common that we both have PhDs in art history and abandoned the academic life for a mission of making art history more fun and more accessible. Tell me about your transition.

Laura Morelli: When I was a kid and people asked me what I wanted to be when I grew up, I always said I wanted to be a writer—or maybe an archeologist. I feel incredibly fortunate that I got to do more or less what I was thinking when I was four years old! But it certainly wasn’t a straight path…

I was initially drawn to study art history through the joys of travel and study abroad. As a graduate student, I made the decision to pursue a career in academia as an art history professor. Along the way, I taught at the college level and even had the fun opportunity to teach American students in Rome.

Working as an art historian involves three things: teaching, researching, and writing. Doing art historical research is a passion for me, and I also love being in the classroom and sharing the history of art with my students. Writing for scholarly journals takes years of training and discipline. I have great respect for the craftsmanship of academic writing and for those who practice it. However, personally, after writing within the conventions of academic scholarship, I began to feel like I was going to burst!

One day I found myself yawning in the audience of a scholarly conference, and I realized that there was something fundamentally wrong. After all, the history of art is the most fascinating topic in the world! Why do we scholars insist on making it dull and inaccessible? I realized then that, not only did I see an opportunity, I felt called to share the excitement of art history with a broader audience.

AMK: How did historical fiction come to be your solution to this problem?

LM: Art history is really about stories and people. Sometimes, truth is stranger than fiction. Those stranger-than-fiction stories make the best nonfiction. Other times, stories, or pieces of stories, are lost to history. And for me, that’s where imagination takes over, and fiction begins.

During the years I lived in Italy, I began writing nonfiction shopping guides and was fortunate enough to secure publishing deals with Rizzoli – an art historian’s dream come true! The old impulse to write creatively began to reemerge.

The story of The Gondola Maker, my first work of fiction, germinated while I was busy researching for my travel guide, Made in Italy. The contemporary Italian artisans I interviewed, one after another, told me how important it was to them to pass on the torch of tradition to the next generation. I began to wonder what would happen if the successor were not able or willing to take on that duty. The gondola maker and his complicated relationship with eldest son began to take shape in my head.

When I turned 40, my husband asked me what I was going to do to mark the occasion and I said, “I’m finally going to write a novel.”

Today, everything I write revolves around art history. For me, the history of art is an endless font of inspiration. When I began to see the opportunity to marry fact and fiction, I knew I had found my niche—better late than never. 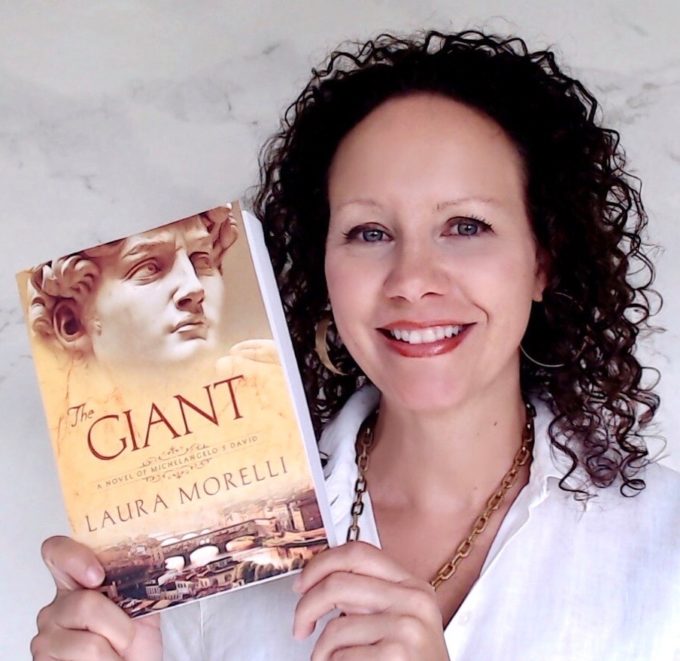 Morelli with her new book, The Giant

AMK: Not everyone has it in them to write historical fiction. What do you think are the characteristics or abilities you need to have to pull it off?

It’s not so different from writing science fiction. We create worlds. The reader steps inside the story and feels transported to a different place and time.

When I visit book clubs, some readers want to know the hard facts. They want to know which parts of the book really happened and which parts I made up. For these super-engaged readers, I have a behind-the-scenes research vault on my website. They get access to all kinds of things, from images and videos to bibliography and discussion questions. If they want to delve deeply into the things that underpin my research, it’s all there.

However, in the end, historical fiction readers want an immersive experience. If a historical novelist has done their job, all of that research is invisible to the reader. It simply melts away, and the reader is transported to another century. They feel they’ve escaped to a different time and place.

Making the mounds and mounds of research invisible… That’s the trick!

AMK: Do you have favourite historical fiction writers and books that served as models for you? How does your approach (or result!) differ from theirs?

LM: I grew up reading sweeping historical novels and non-fiction history books by talented writers like James Michener, Ken Follett, Umberto Eco, Barbara Tuchman… Tuchman’s book, A Distant Mirror, is one of my favorites. As a young reader, I also read a lot of horror and suspense, and I still enjoy a good twisted or dark tale! Perhaps that’s one reason I have felt compelled to write stories set during times of plague.

It is true that it can be difficult to enjoy other works in your area of expertise. It’s hard to relax and just enjoy the story because you are paying such close attention to the details and the way the story is constructed. However, when it’s a great tale, you are swept up in it and all the other stuff fades away.

For example, I recently went back after twenty years to read Ken Follett’s Pillars of the Earth, which is such a fantastic work of historical fiction and one of my favorite books. At the foundation, Follett is just a solid thriller writer. Even though I trained as a medievalist art historian and spent countless hours scrutinizing medieval buildings, in this book, all of that training fades away and I am simply swept up in the story. I want to know what happens and how things turn out for those characters that I now care so deeply about… I feel the same way about Eco’s Name of the Rose. 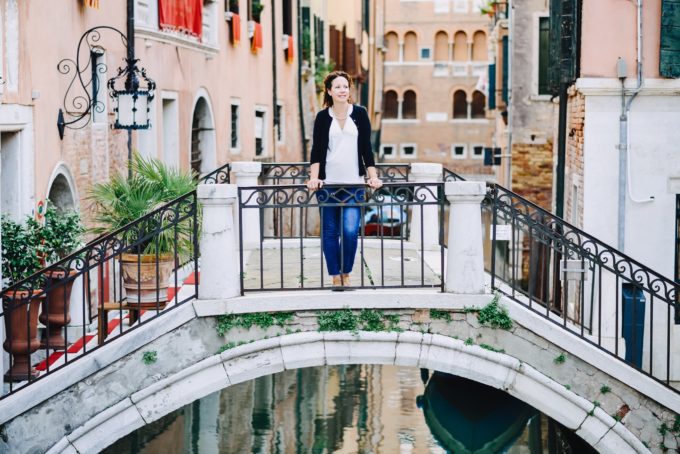 Morelli in Venice, the location of her book The Gondola Maker, and her shopping guide “Made in Venice”

AMK: Your books so far have been set in the Renaissance. Of course your studies make you extremely qualified to set a novel in this period, but not all PhD’s in art history can do this (I think of myself, I’m really not sure I could). So, what additional research, or perhaps mindset change, is needed to be able to write historical fiction about a time period?

LM: Good question! My book, The Giant: A Novel of Michelangelo’s David, was originally intended to be a nonfiction book in the spirit of Ross King’s Brunelleschi’s Dome. But then I put the project away for nearly twenty years! It was only after I pulled my old book proposal out of a drawer that I knew it was meant to be a novel instead.

Writing historical fiction versus history is, in the end, a mindset shift. It’s about wanting to pin the story on the historical record, but also wanting to bring the past to life. Jacopo, the main character of The Giant, grapples with ambition, addiction, comparisonitis, mental illness—all things that are part of the human condition. Fiction allows us to see how we are connected to the larger human experience. Following a protagonist’s story allows us to ask what we would do, facing similar challenges. And it allows us to understand how we are connected to the long threads of history.

AMK: Historians are taught to make hypotheses about the past and try to back them up with primary sources; historical fiction steps in with imagination where sources lack. How do you reconcile reality and fiction?

LM: I always start with primary sources—things written at the time. For the Italian Renaissance, there are so many great primary sources! My personal favorites are legal accounts. Sometimes the laws are so weird! And consider that laws are only made when someone does something considered egregious at the time; it really helps you understand what a culture valued and what they condemned.

For example, in 16th-century Florence, a man was hanged from the Bargello for throwing horse dung at a streetside shrine of the Madonna. My novel, The Gondola Maker, opens with a gondola-burning that is based on a real event in 16th-century Venice. And if you want to read some of the most interesting laws ever, look at the ones made to regulate mask-wearing in medieval and Renaissance Venice! These acts of justice are perfect fodder for a historical novelist.

When reading primary sources, it’s interesting to consider what people choose to focus on—and what they omit. I also find the cadence and tone of the language important for framing the book’s setting and the characters’ mindsets.

For me, the fun of historical fiction is taking the facts as far as they go, then realizing there’s a whole lot of stuff we don’t know. It’s like putting together a complex jigsaw puzzle with a bunch of missing pieces. You make up the rest.

For The Giant, I started with the fascinating primary accounts of Michelangelo’s David, then added the scant yet tantalizing known details of Jacopo Torni’s life. We know just enough about Jacopo to make him an incredibly interesting character: he was in Michelangelo’s inner circle, he worked on the Sistine ceiling, he may have invented a way to inhibit mold on fresco, he was funny, lazy, a practical jokester. Giorgio Vasari gives us one anecdote to hint at the complicated friendship he had with Michelangelo. Little more. What an interesting character! He’s the perfect protagonist for a historical novel, especially woven into the rich tapestry of the known facts around the creation of Michelangelo’s David.

AMK: Do you think historical fiction can be a learning tool?

LM: Absolutely! My readers tell me they read historical fiction to transport themselves to the past—and to learn something new. They don’t want to be hit over the head with a textbook but they want to come away smarter.

Get a free ebook, take a course or learn more at https://lauramorelli.com