The unfinished Adoration of the Magi by Leonardo da Vinci has always been one of the most important testimonies to the artist’s working style. The Uffizi masterpiece has been undergoing analysis and restoration since December 2012, and the first phase of the restoration has been presented to the press due to the exceptional results achieved. Although there were no surprises – restoration went just as planned thanks to extensive pre-intervention research – the first phase, which simply involved careful cleaning, has revealed numerous details in the painting that could previously only be seen by x-ray. Seeing them in person for the first time was like seeing an old friend reborn! 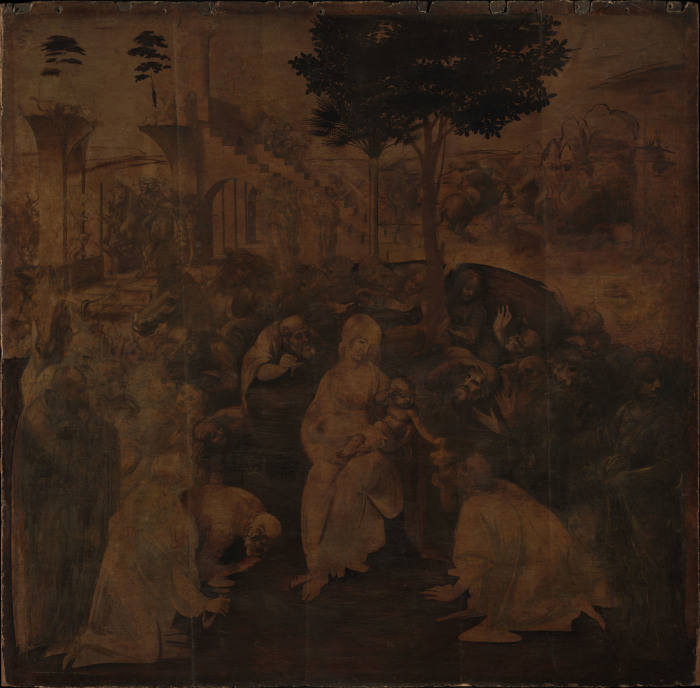 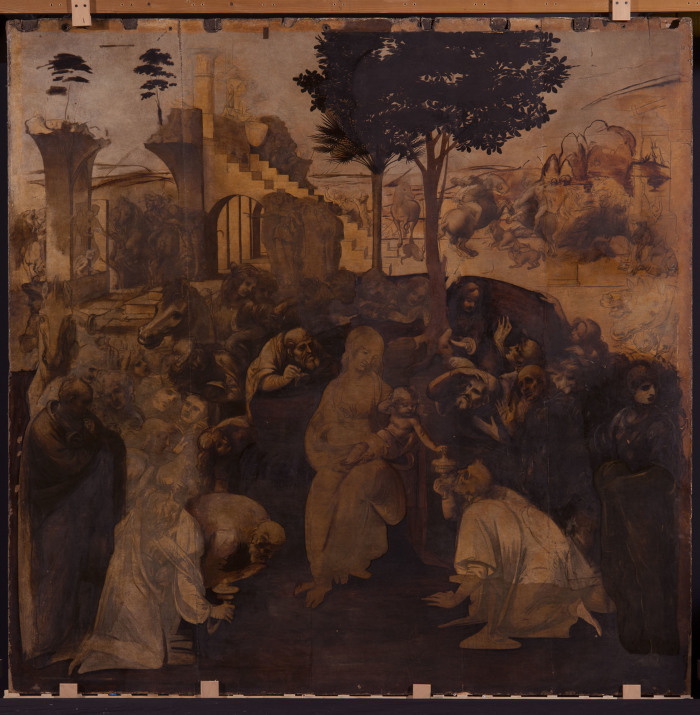 The restoration was presented by Marco Ciatti, Superintendant of the Opificio delle Pietre Dure, by the president of the Amici degli Uffizi, who paid for the project, and by Cecilia Frosinini, an art historian in charge of the work (alongside Ciatti). Ciatti highlighed the main accomplishments: he made a strong point of saying that the cleaning was done very conservatively but that it was necessary, not only because of the increased legibility for us, but also because it has reduced surface deterioration that was taking place due to the way that the “gunk” (dirt, oil, smoke and varnish) was contracting and causing cracking. This is in part justification, since important restorations are always controversial, and already ten years ago or more, this painting was due to be restored but the work was halted amidst controversy. There is always a fear of overcleaning and everyone is quick to criticize. It is clear here, comparing some of the still uncleaned sections to those that have been subjected to the removal of varnish, that nobody has been overzealous. Ciatti emphasized that their goal is never to make a painting look “new” the way it did 500 years ago but just to remove extraneous elements that were added over time. In this case, none of these elements are “historical” (as is in the case of say, the Bardi Chapel by Giotto, where the fresco includes an addition by a later artist), so it’s pretty straightforward.

Cecilia Frosinini took the time to talk with Alexandra Lawrence (editor at large of The Florentine and licensed guide) and I about her very personal experience with the painting and the challenges of restoring a work like this. My apologies for the audio, taken in a crowded room.

It is always an immense pleasure to speak with the people who work hands-on with these masterpieces. When they show you their results, their love for painting and the emotion of discovery comes through. The soft-mannered Frosinini showed us some of the details that restorers have discovered. 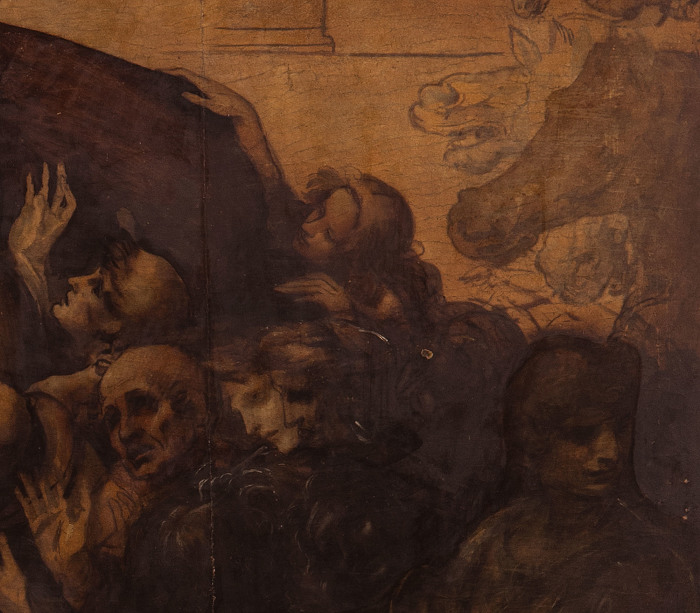 In the upper right hand corner, there are at least three clearly visible positions of a horse’s head. Only one of these is visible through xray radiography because it was in the remarkably freehand under-drawing, while others are pentimenti that came about during the painting phase. 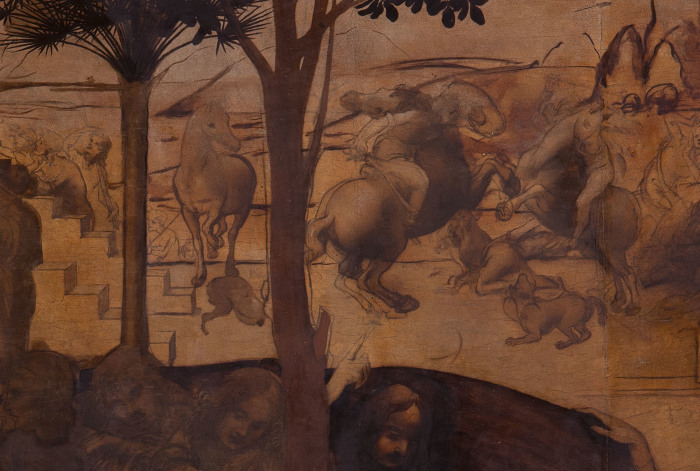 The details we’re seeing all show how much range there is in the level of finish in this painting, as Cecilia Frosinini was explaining in our video. Many figures and faces are entirely finished, and simply wait to have a thin layer of colour applied. The active battle scene in the central background, long the topic of study in relation to the lost fresco by Leonardo in Palazzo Vecchio, has been made much clearer. We can see the horses that are beautifully modeled, much more three-dimensional than they seemed before. There are also hints of the rather lunar landscape that we associate with later Leonardo paintings like the Madonna of the Rocks, and also a pointing finger similar to ones in other works (I’m thinking of the late Saint John the Baptist).

Tree in the making 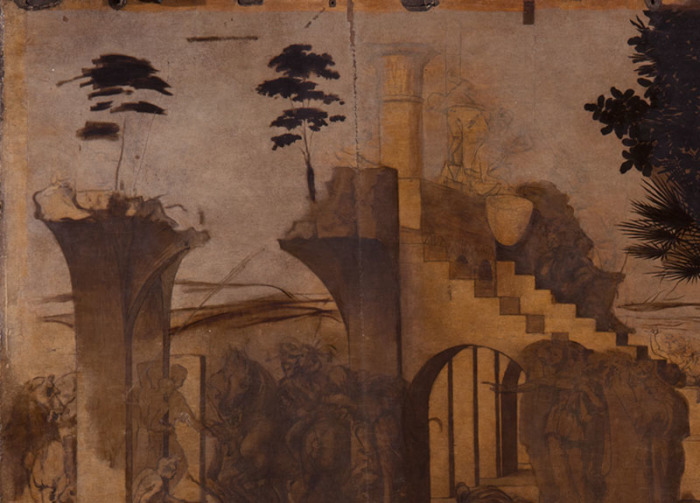 Trees in the making

The tree in the upper left corner, above the ruins, is composed of just a few slash-marks of dark paint. Critics have said that there is no way that this could ever be by the hand of Leonardo. But comparing this to the tree beside it, and then to the tree again to its right, or to the tiny-needled tree in the Madonna with St. Anne, you can see how he built up from these slashes towards further detail. 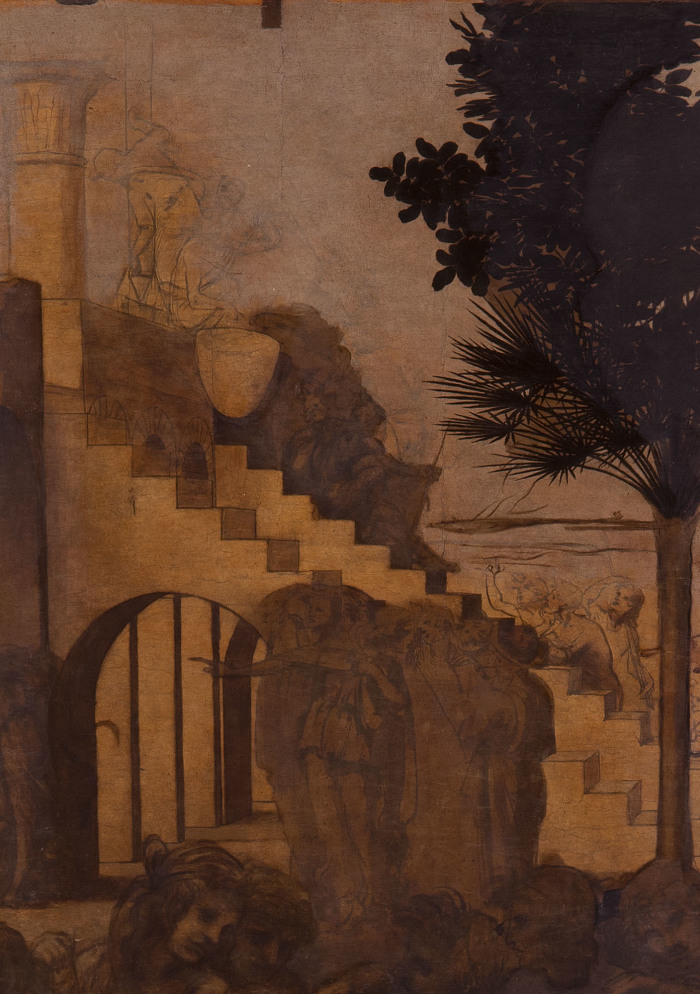 Sketched in figures on ruins

The ruins in the background of this painting have long been subject of iconographic hypotheses. Removing the layer of dirt on the surface reveals figures at the top who are clearly workmen, construction men, working on the structure. As in real-life Italy, at the bottom of the steps there is a group of young men hanging around and watching the two men above work. One thinks, one shields his eyes to see better, and one seems to be suggesting corrections or improvements! Does this mean that the ruins are being restored, reconstructed, fixed? It seems we have a case of a restoration that has revealed… a restoration.

This greater legibility permits better understanding both of the artist’s working methods and of the iconography of the piece – the full meaning of which I will leave up to those better than I to explain. Although the overall meaning has been explored by the likes of Antonio Natali, who had access to scientific photographs that already showed many of these unseen elements, now everyone will be able to see, think about and interpret this masterpiece by Leonardo.