Made in Italy: a ceiling lamp with personality 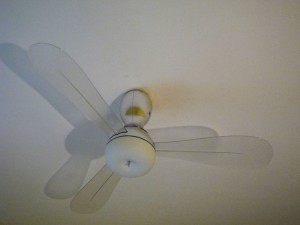 We just installed our new Frizzi, a ceiling lamp made in Italy by Nemo and designed by Karim Rashid in 2005. It’s our first real design object in the house, if you don’t count designers who work for Ikea.

Frizzi is part of a series called “Living Objects“, and this made me pause to reflect on the shapes that appeal to us right now. What makes this “living” and “cute”? Why did I stare at it with a happy doggy face and have to have it as soon as I saw it (despite its price tag)? Pure visual analysis tells us:

1) The fan’s body and the lamp below forms one sinuous curved line that we read as “appealing” and “human”. 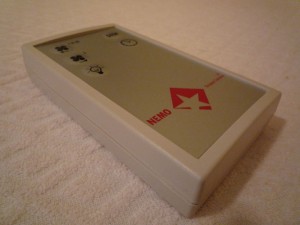 2) The light cover is affixed by a shapely pin that creates a dimple in the glass, but avoids the “boob” effect common to ceiling lamps. Dimples are friendly.
3) Its retro shapes are built from high-tech, functional materials, so it’s comforting (1950s) but also new.

Design aside, it’s also functional. Its three long arms create a galeforce wind when set at high speed; kept on low it’s an energy-efficient way to keep our bedroom cool all summer long. The remote control, evocative of early television controls, is satisfyingly heavy and makes loud beeps while we are visually rewarded with LED feedback from the object’s body.

Frizzi, already five years old, anticipated a lot of design trends that are being named this year and predicted for the coming decade, in particular “retro high-tech“. We’re seeing a lot of nostalgia for the 1950s and 60s, the great era of Italian design and the beginning of domestic convenience. Conversely, we are seeing a drive towards smart homes, energy saving devices, and high technology, but ideally we should not SEE this technology because it’s a bit scary. In the R&D departments of robotics companies they’ve conducted studies of human-robot interaction to see what designs people respond to best, and they find rounded shapes and friendly big eyes to be appealing and effective (see for example the robot named Nao). Machines can now be “adorable”. They are Living Objects.

Writing this post made me realized I don’t have a category called “design”! Maybe I should make one and write more about design that I love – what do you think?