I may be at my happiest when I am looking at Venetian art. Bellini rates amongst my favourites alongside Giorgione and Lorenzo Lotto (an odd combination, but I have my reasons). Having missed the exhibit dedicated to Mantegna and Bellini in London last Fall, I took advantage of the opportunity to see its Berlin iteration on a recent business trip to the German city. Andrea Mantegna and Giovanni Bellini were almost the same age, and were brothers-in-law; the show is dedicated to their artistic relationship, comparing and contrasting them, and demonstrating how neither’s career or artistic development would have existed without the other.

The show in London received mixed reviews – Jonathan Jones claimed you’d need a PhD to understand it (he seems to have it in for the way Bellini family drawing album opened the UK exhibit, but that was absent here in Berlin). I beg to differ: my husband, an engineer, thoroughly enjoyed it and he found the thesis simple and well demonstrated. Personally, despite my PhD in this topic, I wasn’t so aware of the close similarities found in the two artists’ work and enjoyed observing them here. It’s a show of a truly international calibre with every single work being by the two masters except for a few well-chosen pieces that serve as additional context; there’s no filler or dubious attributions here. This remarkable feat of curation – the kind of thing you can really only do if you’re a heavyweight institution – allows us to compare, in person, many works that have never hung side by side before. 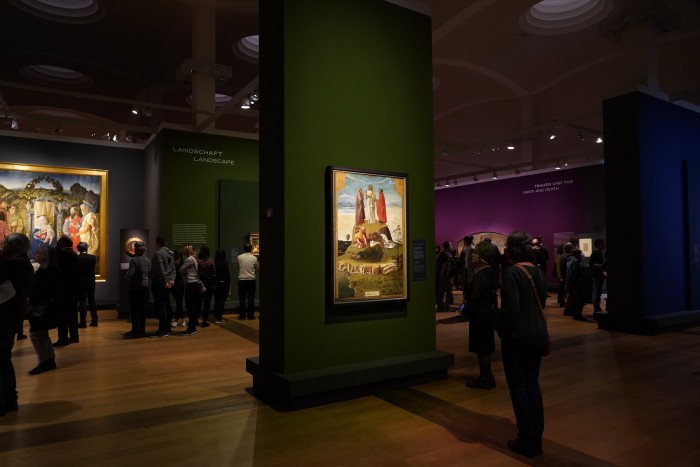 At the Staatliche Museen zu Berlin, the exhibition space is one very large room divided by panels to create multiple “niches” that contain the thematic sections. These are lusciously painted with colours drawn from Bellini’s palette – the walls are so gorgeous, in fact, I’d say they contribute significantly to the success of the show. And while the visitor flow is a bit odd as you weave your way from one side to another, it works, even on a very crowded Sunday (though I highly recommend going any other time!).

The show opens with a timeline showing the close birthdates of the two artists. Oddly enough, there doesn’t seem to be any introductory wall text – they must assume that everyone uses the audio guide. Born 1431, Mantegna married Nicolosia, the sister of Giovanni Bellini (b. circa 1435) in 1453 in a marriage orchestrated by Jacopo Bellini, head of the most successful artistic family in Venice. The marriage appears to have been arranged as a way to bring the talented young man into the family (we don’t know Mantegna’s opinion on the matter). Mantegna, son of a carpenter, trained with Francesco Squarcione in Padova and was also influenced by Donatello there. Giovanni and his brother Gentile were the sons of Jacopo. While Mantegna became court painter in Mantua, Giovanni stayed in Venice; both had a huge impact on later Renaissance art. 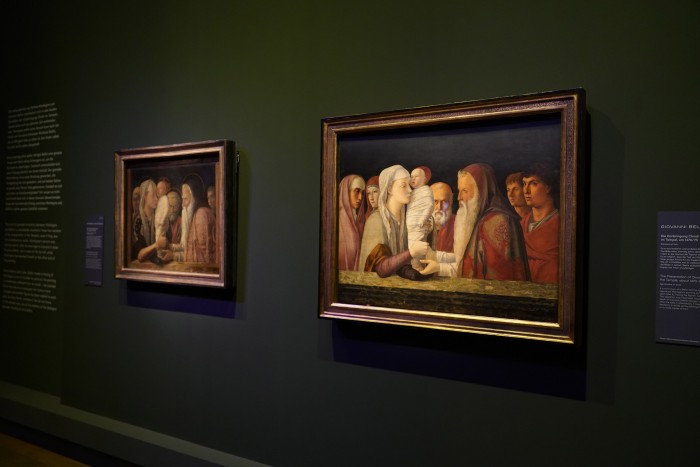 Presentation in the Temple

From the start, we’re shown how different the two artists’ styles are, and this comparison is carried throughout the show: Mantegna’s sculptural style, precise linearity and anxious mood is contrasted with Bellini’s soft, painterly landscapes and poetic feel. We see the two artists working on the same subjects, often with similar compositions. In one case, Bellini has literally traced Mantegna’s composition: Mantegna’s Berlin Presentation in the Temple was copied twenty years later by Bellini (Fondazione Querini Stampalia). Same composition, but Giovanni’s figures (two more than the model) are imbued with life and internal dialogue in a way that his brother-in-law’s aren’t. Here, family connection is the reason behind the similarities – both works include portraits of family members, and it is possible that Giovanni purposefully adopted Andrea’s format in a kind of “sequel”. 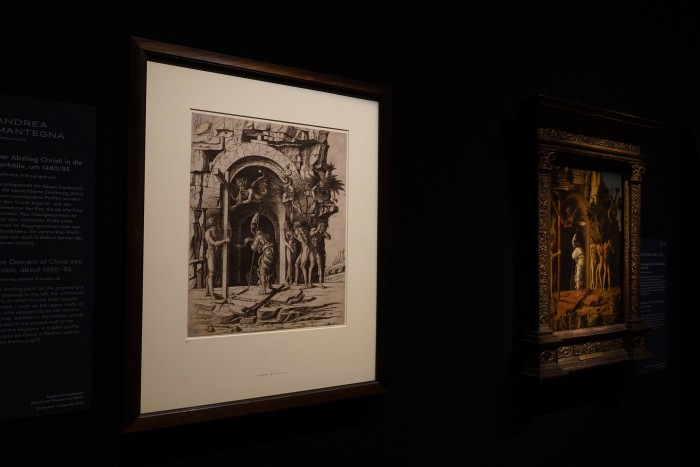 In another comparison that demonstrates influence and collaboration, Bellini bases his Descent into Limbo (Bristol, City Museum) on drawings by Mantegna and his school, known also in print. A section of the show is dedicated to this theme that Mantegna expanded upon in numerous studies – small works that it’s a pleasure to be able to see all together. Examples like this span the artists’ entire careers, beyond when Mantegna moved on to Mantova, indicating, I assume, some kind of continued correspondence.

In comparisons like these, Bellini comes out looking like a copyist with a poetic soul, incapable of coming up with his own compositions, while Mantegna is a man from Mars with a hyperactive imagination. I can’t help but think that a whole lot of context is missing from this story – information that would explain the reasons behind these similarities. As I expected, the excellent catalogue is a must-read in this sense, and of course it wouldn’t be possible to incorporate this level of information into the general-public exhibition space. Curator Caroline Campbell puts the artists and their works into the contexts of the cities in which the artists worked: Padua, seat of intellectual innovation and Humanism; Venice, the religious superpower and perfectly governed state. The essay by Andrea Marchi addresses my perplexity at length; he identifies how when both the Bellini and Mantegna workshops were working in Padua in 1457-9, Giovanni Bellini begins to take notice of Mantegna’s “compositional framework that creates such a supreme bond between each gesture and each foreshortened figure,” (p. 35), and this bond, I think, is the result that interests him. Marchi also mentions compositions of architecture within landscape that are all Bellini’s, but not included in this exhibition. Reminding us that Bellini preferred to paint devotional paintings over complex histories is a way of indicating that each artist had his speciality, and that Bellini simply preferred to concentrate his efforts on rendering the atmospheric relationship between man and nature. 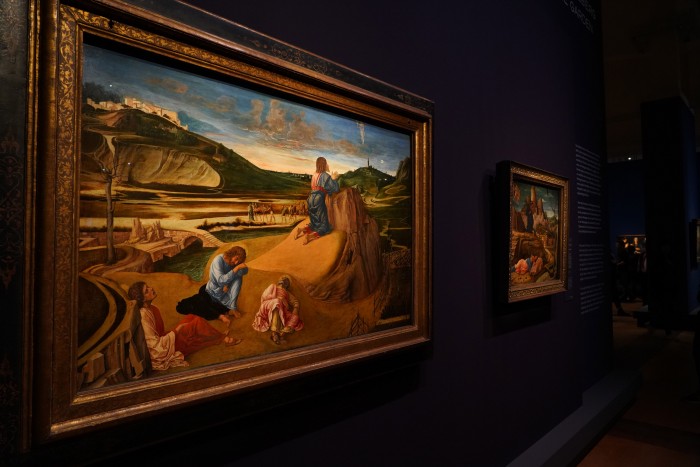 Agony in the Garden

Back to the show, in other cases, we see the two artists working on the same religious subject but there is not a one-to-one relationship between the compositions. These serve to highlight each artist’s individual style and brilliance, and to the modern viewer, Bellini starts to look more like a winner. A comparison that actually normally hangs side by side in the National Gallery in London involves two images of the Agony in the Garden. Both are in egg tempera despite Bellini’s incorporation of oil in most of his works – a significant factor that differentiates the two artists. Mantegna’s smaller panel dates to a few years before Bellini’s, and is a wonderful invention full of imagined antique details. Bellini’s work, which uses the very effective diagonal composition typical of Venetian painting, brings us into contemporary Italy in his beautiful landscape suffused with dawn light. 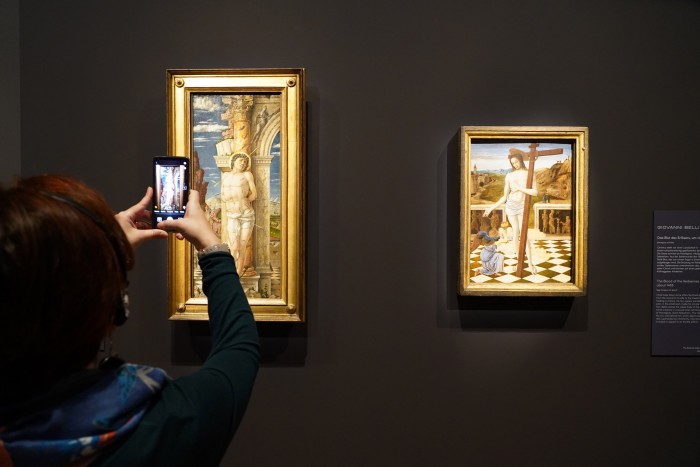 Another comparison, that of two images of Saint Sebastian, even more clearly hammers home the idea of two very different moods, encapsulated in the face of the Saint. You can get up very close to the paintings without setting off alarms, so you can examine the tiny details in the landscapes that both artists take joy in depicting. I spent ages admiring Bellini’s masterful blending of oil paint in the rocks in the Berlin Resurrection of Christ as well as the tiny, accurate animals by Mantegna in his Saint Sebastian. 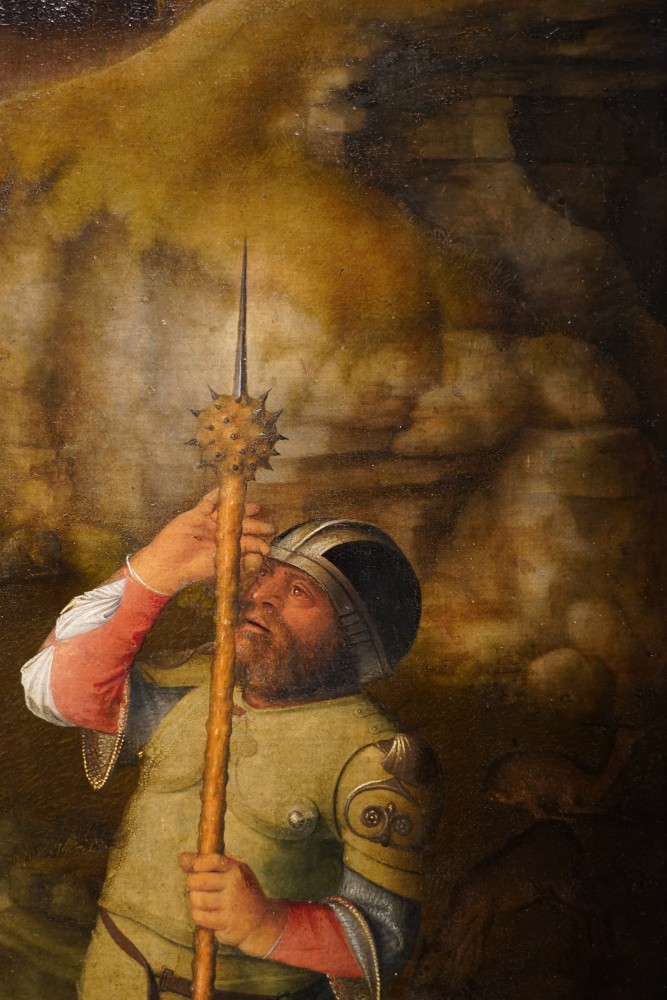 Detail of rock formation in Bellini’s Resurrection of Christ

The exhibition concludes with Mantegna’s Triumph of Virtues (Paris) and Bellini’s Feast of the Gods (Washington) next to each other; the two masterpieces were made, respectively, for Isabella d’Este and her brother Duke Alfonso I d’Este. Isabella’s Studiolo decorations were based on complex iconography developed in consultation with the humanist scholar Paride da Ceresara, generally about virtue conquering vice. Isabella desperately wanted a Bellini in this space, but the artist refused; apparently, Bellini preferred to create a devotional work for her (he did, it is lost), and didn’t want to be compared to Mantegna’s work in the same space. The letter (which we shouldn’t take 100% at face value) through an agent says: “[the picture] would be compared with those works  by messer Andrea [Mantegna], and thus he wishes  to do as he knows [best]” (cat. p.15). Ironically, here we are doing just that. The choice of artists and styles suit both the topics and their patrons. Isabella’s Mantegna clearly delineates right and wrong with his sculptural style; Alfonso’s Bellini is able to skirt the line between lasciviousness and the acceptable through delicate treatment of a topic often used as an excuse to show bad behaviour.

Mantegna and Bellini were two extremely important Renaissance artists with very distinct styles and clear points of intersection. This exhibition lets the general public observe where they meet and draw conclusions for themselves through the very special opportunity to make numerous on-point comparisons in person. For more expert viewers, the catalogue is the perfect companion to go beyond observation and look into the artistic traditions of the cities in which the two artists worked, as well as patronage expectations and iconographic conventions that influenced each artist’s style. 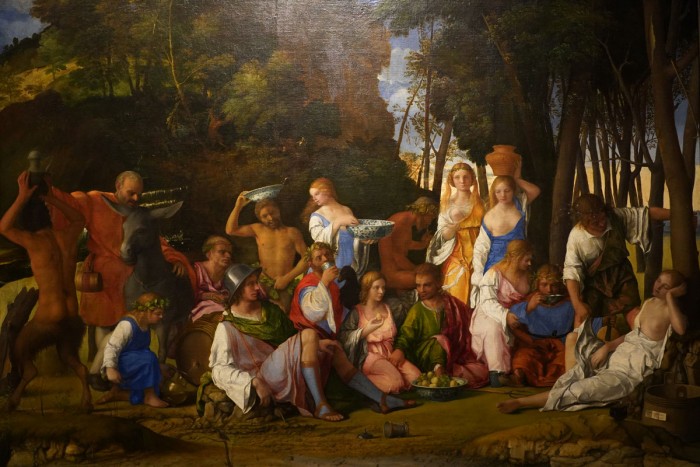 Bellini, Feast of the Gods