I don’t normally write reactionary pieces, but this bit of news has me frothing at the mouth. This Prof. Vito Franco from the pathology department in Palermo has taken to diagnosing illnesses in famous Renaissance works of art. He presented his findings at a conference in Florence in early January, but has not published a paper about them. He’s been in many major newspapers for this, most in Italian but also in the Times. Amongst his findings: Caravaggio’s Sleeping Cupid has rheumatoid arthritis, Mona Lisa has high cholesterol, Piero della Francesca’s Madonna del Parto has a thyroid problem, Parmigianino’s Madonna of the Long Neck has Marfan’s syndrome… and Michelangelo’s Night is a transsexual, or man with fake breasts. Like we haven’t heard that one before! 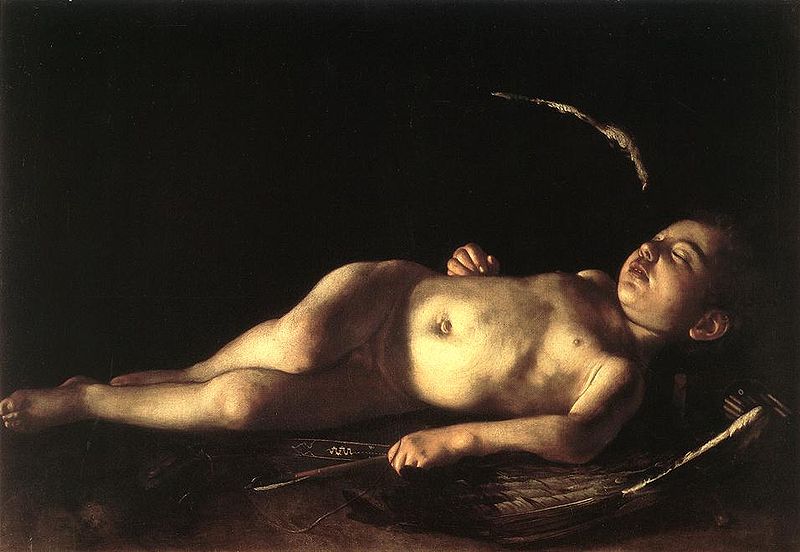 All I can say to this is UGH! Having gotten over my initial disgust I’d like to provide a small rebuttal. Dear Professor Franco, I don’t go around diagnosing corpses with illnesses so why are you diagnosing paintings? The CONTEXT of artistic production is essential to our understanding of works. If we know something of the artist in question, we can evaluate visual diagnosis of pathology.

For example, art historian Jonathan Nelson and a friend of his who is an oncologist (Stark) published an article in the New England Journal of Medicine back in 2000 about the breasts of Michelangelo’s Night whom they observed have all the evidence an advanced case of breast cancer. Nelson knows a little something about Michelangelo and about this period of art history (he teaches High Renaissance at Syracuse University in Florence and has published on Michelangelo, Filippino Lippi, and Botticelli). While the oncologist diagnosed the breast cancer, Nelson was able to back up this diagnosis information with what we know about Michelangelo as an anatomist – that he dissected corpses and could have had access to an old woman with this condition. With this article and also through later works, Nelson has disproved the old criticism that Michelangelo never saw a naked woman (since he was apparently homosexual), a really preposterous comment that has made its way into a lot of art history books. 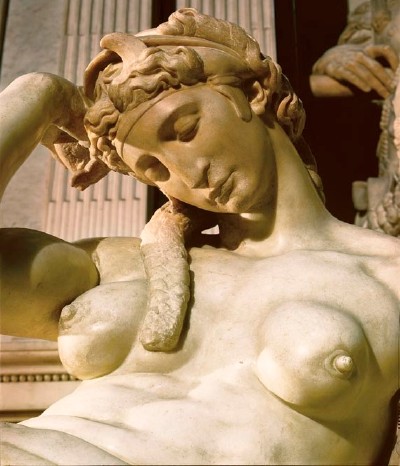 Back to Dr. Vito now. I’d love to know what evidence allows him to give the poor baby Sleeping Cupid at the Pitti rheumatoid arthritis, although my diagnosis of said Cupid by Caravaggio is worse: he’s dead. I argued this in a paper about 10 years ago – the baby’s bloated with rigor mortis and he’s got a greenish hue. My diagnosis is as ridiculous as Dr. Vito’s except one thing: we know that Caravaggio got in trouble once before by basing a major figure in a painting on a corpse (the Death of the Virgin for Santa Maria della Scala in Rome was refused by its patrons for this reason) . We need art historical precedence before iconodiagnostics. 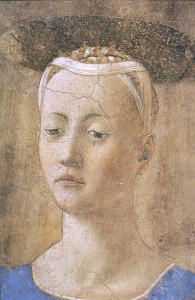 Piero’s Madonna del Parto: do you see a lump on her neck? I don’t.

Similarly, consider Piero della Francesca‘s Madonna del Parto. A lump on her neck diagnoses her with a thyroid disease. But what of Piero’s creative process? We all know that Piero’s figures are highly idealized and that he uses the same figural and facial types across his works – he was not an anatomist (if you think his people are funny, you should see his horses). The same female figure appears in the chapel of the Holy Cross in Arezzo – is this one model with a thyroid problem or one idealized female and some problems with shading? What might look like a lump to one person – and I don’t see it – could easily be the result of the tragic history of this fresco that has had to be removed from the wall upon which it was originally painted since the building no longer exists; the practise of fresco removal may cause the loss of detail and make close analysis of the painting impossible.

For each of these works of Renaissance art, a medical diagnosis needs to be backed up with a thorough study of the artist’s practise, style, and other social-historical elements.