A new lighting system revealed yesterday in Michelangelo’s Medici Chapel (or New Sacristy) at San Lorenzo is much more than news; it’s an opportunity to reflect on the role of light in Michelangelo’s prodigious project. Many art historians have observed that light plays a symbolic role in this space, famous for its sculptural representations of Night and Day, Dusk and Dawn, but it is indeed hard to notice this when you look  at the space with the artificial lighting system installed 30 years ago. The Bargello Museums (in charge of four Florentine museums including this one), in partnership with Lottomatica (a lottery game group), recently updated the lighting and cleaned some of the sculptures. The new lighting system in Michelangelo’s Medici Chapel provides a reading of the work that corresponds better with art historians’ understanding of Renaissance theories of light in painting and sculpture. 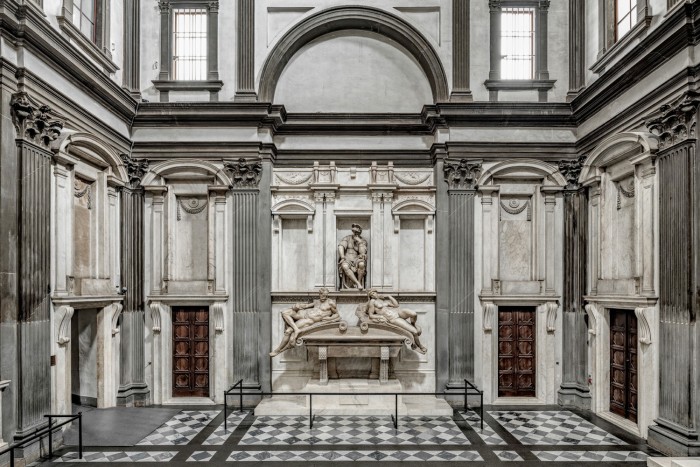 The following timeline sums up the documented information about Michelangelo’s work at the Medici Chapels, which began with the incomplete façade of the Church of San Lorenzo. The following information is a translation and adaptation of material provided by the Bargello Museums.

October 1516: Michelangelo receives a commission from Pope Leo X, through cardinal Giulio de’ Medici, for the construction of the façade of the basilica of San Lorenzo in Florence, which is the Medici family’s parish church. The 300,000 ducat job marks the end of the Medici’s hostility towards the artist, who had abandoned them during the first republican revolt of 1494. 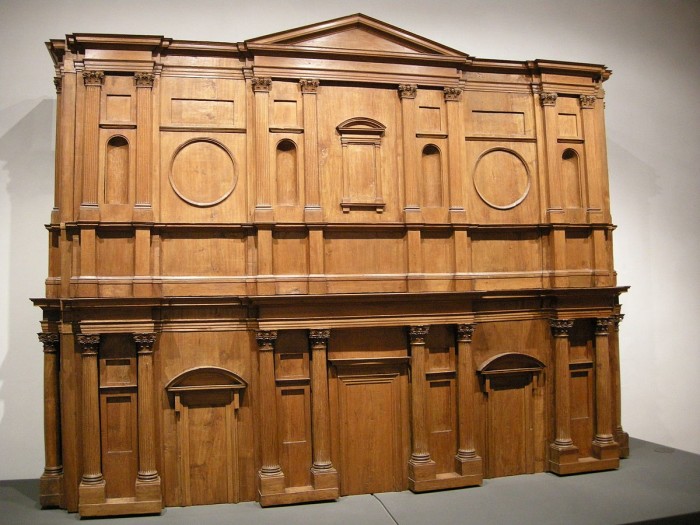 1518: Michelangelo extracts marble at Seravezza for columns of the façade of San Lorenzo. The dangers of marble mining are apparent in the documents which indicate that a column fell and broke, a quarryman died and another was injured.

1519: Lorenzo de’ Medici, Duke of Urbino, dies at age 26. In June, Giulio de’ Medici, again acting for the Pope, commissions Michelangelo to construct a burial chapel for the Medici dukes and princes Giuliano and Lorenzo, respectively brother and nephew of Pope Leo X, who both died young. Michelangelo begins work in November.

1520: In March, much to Michelangelo’s dismay, the façade project is cancelled. From June, he appears on the record books as regularly working on the construction of the New Sacristy. This space is the same size as the Old Sacristy, a chapel to the left of the altar inside the church that was designed by Brunelleschi. However, space is articulated very differently, with architectural orders stacked one upon the other. Michelangelo has a full-size wooden model made of the niches on the wall that should have been filled with statues, stuccoes and paintings.

1521: The first level of the walls is complete; on April 10, Michelangelo orders the extraction of marble for the statues and architectural decoration.

1524: The rest of the structure is complete. In March, Michelangelo announces that he has finished the frames of the dukes’ tombs. 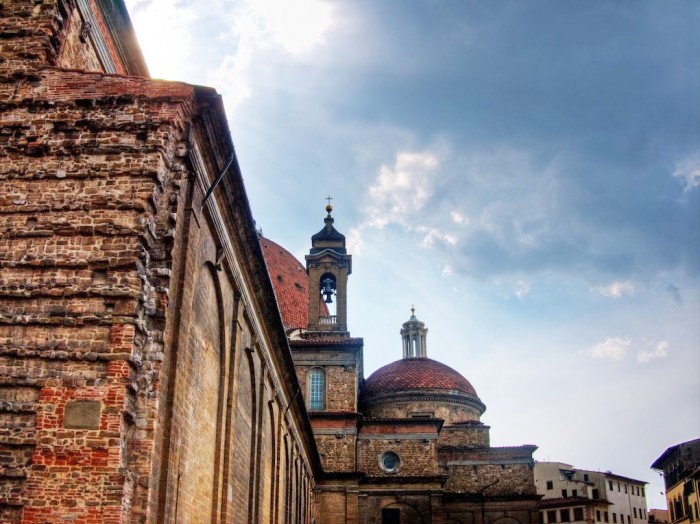 1526: In June, Michelangelo writes that the following works are finished: four Allegories of the times of day (day, night, dusk, dawn); one captain (i.e. Giuliano de’ Medici); and the Madonna. Work begins soon after on the figure of Lorenzo.

1527: Work is interrupted due to the second republican (or Ciompi) revolt. Once again, Michelangelo turns against the Medici and works for the new government on the fortification of the city.

1530: On August 12, Florence surrenders to the imperial troops after two years under siege. The Medici come back in power and Michelangelo hides. We now know that his hiding place is a small room off the Medici Chapel, called the “stanza segreta” (set to open to the public in 2020).  He hid there for two weeks, where he “doodled” on the walls. Pope Clement VII (Giulio de’ Medici) pardons Michelangelo but forces him to go to Rome to paint the Last Judgement in the Sistine Chapel and work on the Julius Tomb. 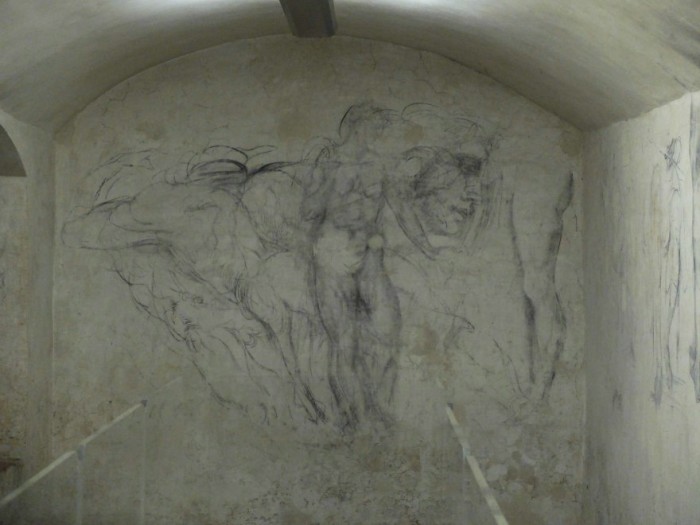 Art historians, including William Wallace, believe these are autograph drawings by Michelangelo, done to pass the time while hiding in the stanza segreta at San Lorenzo.

1534: Michelangelo leaves Florence once and for all, leaving the New Sacristy incomplete with the statues inside, but not arranged.

1533-37: The statues of saints Cosmas and Damian are done by other artists (Raffaello da Montelupo and Giovan Agnolo Montorsoli).

1546: The allegories of the times of day are set up on the sarcophagi, commissioned to Tribolo, by Cosimo I de’ Medici. 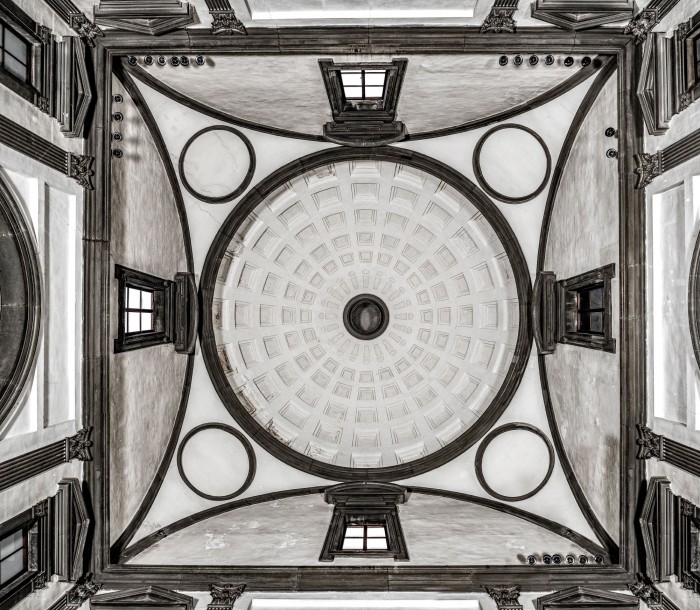 Looking up at the ceiling of the New Sacristy. Note the windows, of which one is obstructed.

Although it wasn’t completed during the artist’s lifetime, the New Sacristy is a unique monument. It is a rare case of both a space and its decoration that are entirely planned by a single artist. This extraordinary space is conceived as a whole, composed of sculpture, architecture, architectural decorations, and light. Light here is functional and dynamic: it comes from above, in the lantern of the cupola, and from the windows on every side, at two different heights, as well as from a particularly large window at the south side. Art historians Christoph Luitpold Frommel, Erwin Panofsky, William Wallace, Georg Satzinger have shown that light here is symbolic; it serves to exalt pathos and to unify the elements. 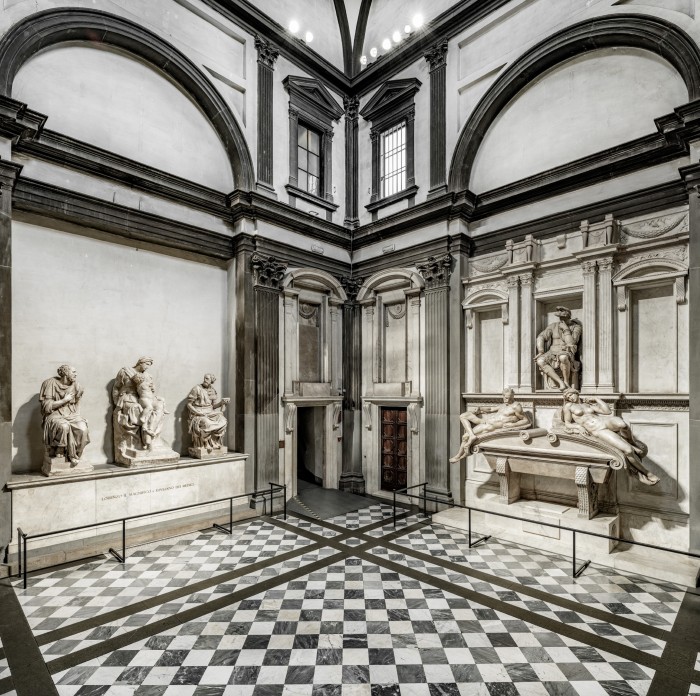 The tomb of Lorenzo Duke of Urbino (right) and of Lorenzo il Magnifico (left). Note the lights on the cornice.

Illumination in the Medici Chapel comes from above as well as from the side windows, producing two different qualities of light – one more constant, the other that changes more during the day as well as with the seasons. The light from above is a diffused light that falls on the cornice and niches creating a constant horizontal shadow but without harsh contrast. This makes it possible to “read” the sculptural groups at any time of day. The use of light from above is an idea Michelangelo may well have observed in Rome: it features in Bramante’s choir at Saint Peter’s, the church of Saint Eligio degli Orefici by Raphael, the Chigi Chapel at Santa Maria del Popolo (designed by Raphael) as well as in the oculus of the Pantheon. 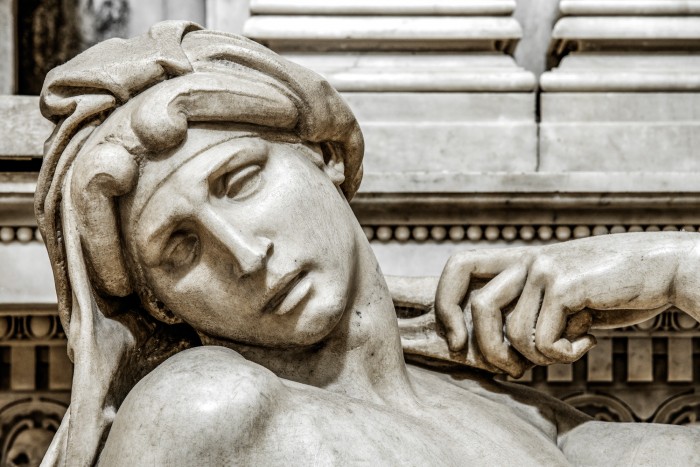 The light from the side windows is more direct, and serves as a commentary on the statuary groups. Without harshly interfering with legibility, it moves around the statues that represent the times of day in a way that clearly adds to the symbolism of the groups. In the morning, the bright rays illuminate Dawn from behind and create refraction off this marble sculpture; at some times, Night is lit indirectly from below.

Leonardo, in his treatise On Painting, speaks of different kinds of light; of direct light and in particular of “reverberation” or secondary light, which came from his experiments on the diffusion of light:

“Reverberation is caused by bodies of a bright nature with a flat and semi opaque surface which, when the light strikes upon them, throw it back again, like the rebound of a ball, to the former object.”

Michelangelo takes Leonardo’s theories of painting and transfers them to the plastic arts. The artist is famous for not completing his sculptures, resulting in some surfaces remaining roughly chiseled while others are highly polished. You can see this on the famous “Slaves” in the Accademia and on the Pietà in the Opera del Duomo museum. Most of the time this is a question of fortune taking Michelangelo away from commissions, as it may be here too. But it has been suggested that the higher and lower levels of what we call “finish” of the marble may be related to a desire to create more or less reflective surfaces that play with light, and in particular, with the abovementioned “reverberation”. 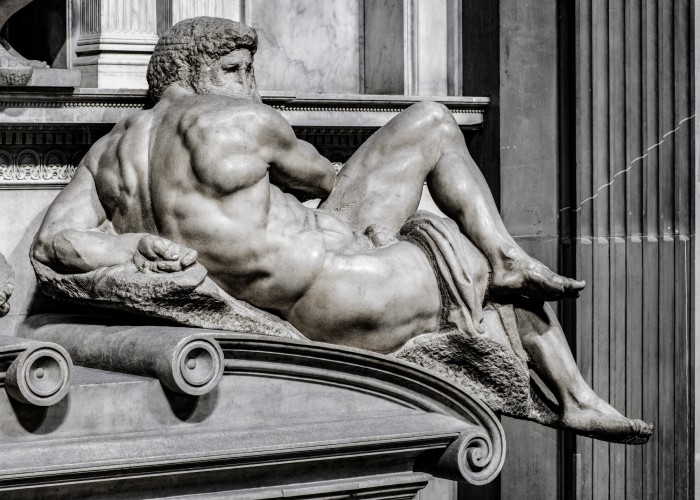 In this way, Michelangelo would be voicing his contradiction to Leonardo da Vinci’s view in the ongoing debate about the relative superiority of the arts (called the Paragone, this discussion obsessed Renaissance theorists). Leonardo stated that painting was better than sculpture because sculpture did not have light and shadow. Benedetto Varchi’s “Lezione” of 1546 refers to the role of natural light as essentially compensating for sculpture’s lack of light and shadow. This may be what Michelangelo was trying to do in the Medici Chapel – sculpt with light.

This restoration project was guided by four main figures: Antonio Forcellino, an art historian and conservation expert who cleaned the Madonna and Child and Saints Cosmas and Damian, Mario Nanni, a lighting expert, the art historian in charge of the Medici Chapels, Monica Bietti, and the architect Maria Cristina Valenti, technical director of the Bargello Museums. 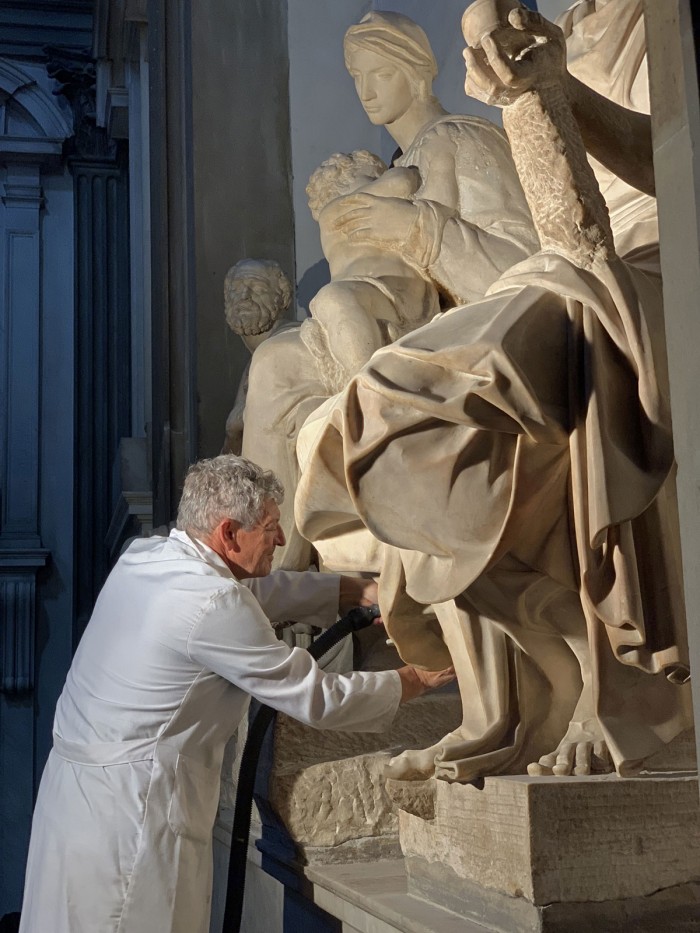 The new lighting project takes into account the art historical aspects we have described, but also the changes to relevant physical aspects of the space, in particular the construction of the Cappella dei Principi (17th-18th century) next door, the cupola of which blocks the diffused light at certain times of the year. A conscious choice was made to not attempt to “fix” this situation going back in time, but to work with it.

The new LED lights installed on the cornice of the second order (near the ceiling) are intended to reproduce the diffused light that comes from indirect sunlight. As such, they were calibrated to the colour of the sun outside San Lorenzo, attempting to simulate natural light. The job of these lights is to illuminate without creating harsh shadows, allowing us to read the plasticity of the space without interfering with the still extant natural light. In fact, at certain hours of the day, sunlight enters through the large east window, creating the effect believed to be originally intended by Michelangelo. 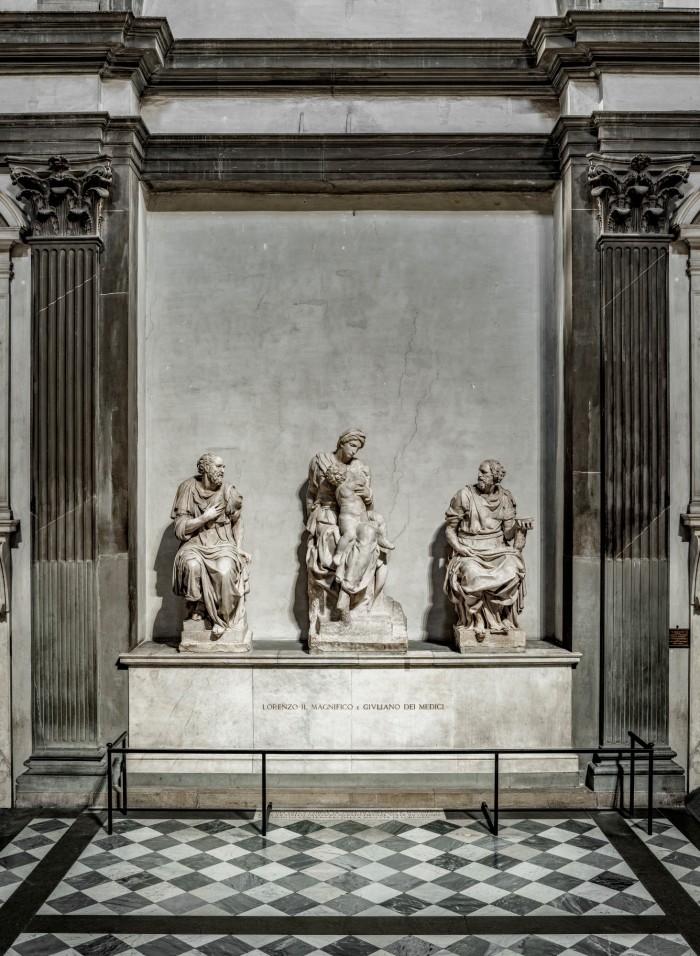 Tombs of Lorenzo and Giuliano

Text/info source: press releases from Bargello Museums, including an essay about the light in the Medici Chapels, unsigned (presumably by Antonio Forcellino).

All photos by Andrea Jemolo provided for press use.

This bibliography contains referral links to Amazon .com and .it from which I earn a small percentage.