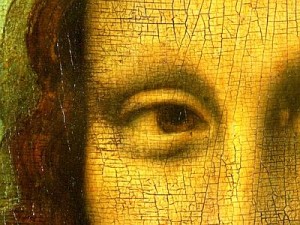 My colleague Michela sent me a link today to an article about Leonardo’s Mona Lisa. It seems that every month now someone comes up with some great new revelation about this painting. Thanks to recent discoveries, the location is decreed to be the famed town of Bobbio (huh?) and the subject Bianca Sforza, revealed by her initials (and those of the artist’s) written in her eyeballs… which rather conveniently makes for a big B.S., IMO.

I am not inclined to believe anything without reading and seeing proper scientific evidence. Newspapers are quick to jump on news about famous artists – like the “new Caravaggio” found in Rome last year that lasted about 2 days before it was demoted to the substandard imitation that it is. Now this latest announcement about Leonardo is being marketed to the general public as “something out of the pages of a Dan Brown book” (yahoo news). In these cases it helps to turn to the always honest Vittorio Sgarbi, who, with regard to the eyeball-initials, said they’re “Assolute insensatezze” – totally crazy.

It is Silvano Vinceti who sustains to have found letters in Mona Lisa’s pupils – the letters L V and a group that could be either B, or CE. This “clearly” identifies the sitter as Bianca Giovanna Sforza. The same Vinceti was responsible for the display of Caravaggio’s bones at Porto d’Ercole this summer. This kind of publicity around famous artists doesn’t please Sgarbi who said “Sono forme di “vampirismo”: queste persone si attaccano a un autore importante soltanto per far parlare di sé”  – it’s a form of vampiricism; these people deal with a famous author just to turn attention to themselves. [source]

Now art historian Carla Glori claims to have identified the low stone bridge above the figure’s left shoulder as the 7th-century Ponte del Diavolo over the Trebbia river at Bobbio (comune of Piacenza). In case you’re as clueless as I about this location, here it is on a map. 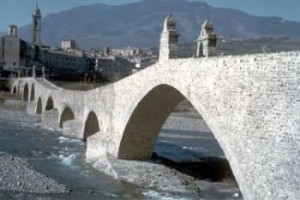 The number 72 discovered near the bridge by Vinceti nicely coincides with the year that this bridge was “washed away” and then replaced (we think the painting is from the 1490s). Bobbio, for all its present obscurity, was apparently a pretty important town in the Renaissance, and was under the rule of Bianca Sforza’s father (she was illegitimate) Ludovico il Moro.

I may swallow my sarcasm a few years from now but Martin Kemp also disagrees (and he’s one of my heroes). I end with a quote from him borrowed from the Daily Mail.

The portrait is almost certainly of [Italian noblewoman] Lisa del Giocondo however unromantic and un-mysterious that idea might be. There have been many attempts to identify the landscape as a specific location and I do not find the resemblance to the Bobbio bridge all that close. I have great reservations about all attempts to find some obscurely hidden meaning in Renaissance works of art.

Also in the past few days, Queen’s University professor Ross Kilpatrick has made the news with his much more art-historically traditional proposal in which he proposes three poems from Horace and Petrarch that he believes informed Leonardo’s famous painting (see ctv.ca and artsblog.it); here is one of them.

What do you think? Should we continue to look for new revelations in old paintings? Is any of this anything but… BS?