Palazzo Rucellai sits and waits. Nestled among the bright and busy commercial boutiques that line Florence’s Via della Vigna Nuova, the fifteenth-century house is a beacon of reserved elegance, quite unlike its hulking contemporaries—Palazzo Medici, Palazzo Strozzi, Palazzo Pitti—which unapologetically command entire city blocks as well as throngs of checklist-happy tourists. Lovers of fine architecture—indeed, any serious student of Italian Renaissance art—will recognize Palazzo Rucellai as the uncontested frontrunner, for this was the first private building, with its groundbreaking façade, to establish the vocabulary of Renaissance classicism. 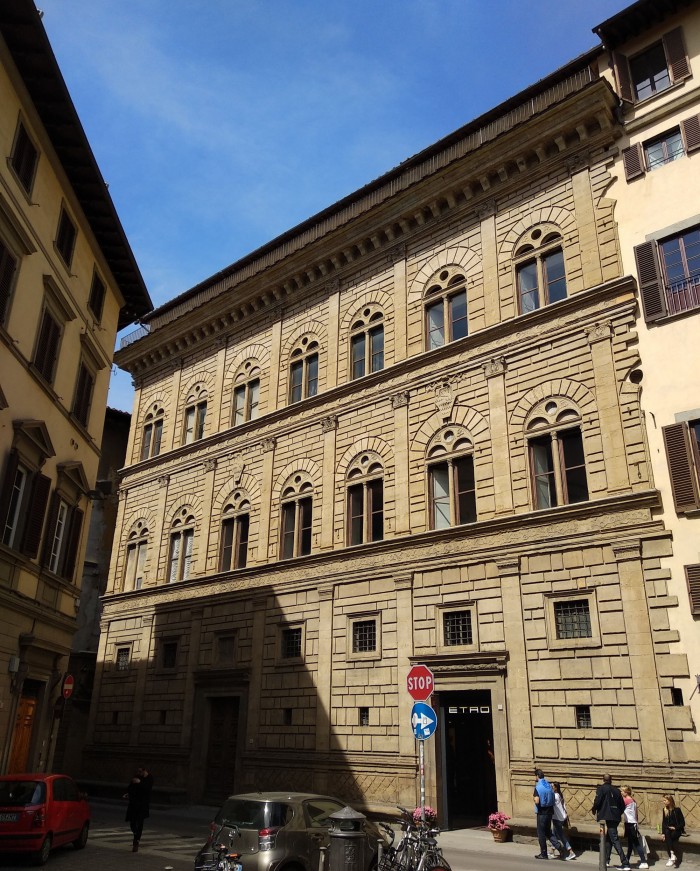 The cognoscenti who huddle in Piazza Rucellai know, too, that the palace complex was the brainchild of Giovanni Rucellai, the third richest man in Florence in the mid-fifteenth century, and Leon Battista Alberti, arguably the most important architect and theorist of his era. Most visitors come to see the curiosities of the façade: the jagged edge of the unfinished right edge, the windblown sail and diamond ring motifs that dance across the architraves, the decorative backrest of the built-in bench at its base. Some admirers linger longer than necessary, hoping to catch a glimpse of the interior courtyard, should the front door be opened for the occasional guest. It rarely does, however; Palazzo Rucellai remains in family hands—private, closed to the masses. Thus, most of what the average visitor knows about Palazzo Rucellai is seen from the outside. Here are six innermost house secrets of Palazzo Rucellai—some closely guarded, some forgotten, some swept under the rug.

1/ The palazzo has purple underpinnings 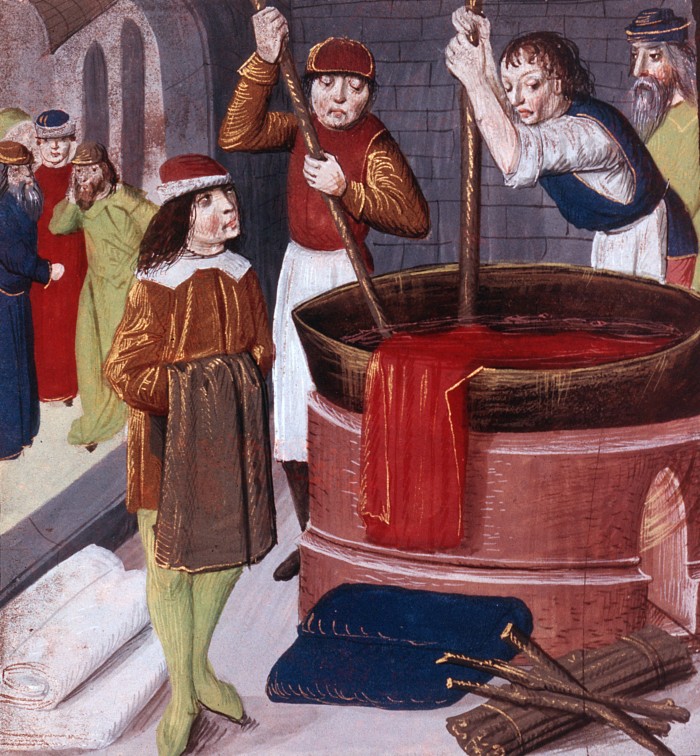 The Rucellai made their name—literally­—from oricella, the Italian word for a crimson dye known as “poor man’s purple.” Sometime around 1250, an enterprising merchant-adventurer named Alamanno set out along the eastern Mediterranean trade routes, determined to find the Next Big Thing. What he got was the Next Best Thing. For what the Florentine merchant had managed to get his hands on was Roccella tinctoria, a small, dry, drab-colored lichen, a most unassuming agent which, when mixed with urine, yielded not “royal purple” per se, but something far more valuable: “poor man’s purple.” Using the age-old recipes of the Eastern dyers, which the clan itself managed to keep secret for almost a century, the family manufactured the dyestuff in Florence and soon became known as the “Oricellariis,” the orchil dyers, a Latinized form that would eventually morph into the vernacular Rucellai.

2/ Mysterious glyphs on the façade

Measuring less than four inches in length, the 50+ incisions that subtly punctuate the façade have gone largely unnoticed. And those in the know remain puzzled: do the markings refer to an assemblage code? There seems to be no rhyme or reason to the order or orientation of the symbols. Were they scratched before or after the blocks were set in place? The stylized letters and numerals suggest mason’s marks, but the inclusion of stars and crosses hints at something much more cryptic. Hiding in plain sight, could this be a secret message embedded by the architect, inventor of the first polyalphabetic cipher (so secure was Alberti’s encryption tool that it was still employed by the US Navy at the time of the American Civil War). If Alberti did embed a message into the sandstone face of Palazzo Rucellai, what did it say? And, more to the point, for whom was it meant? 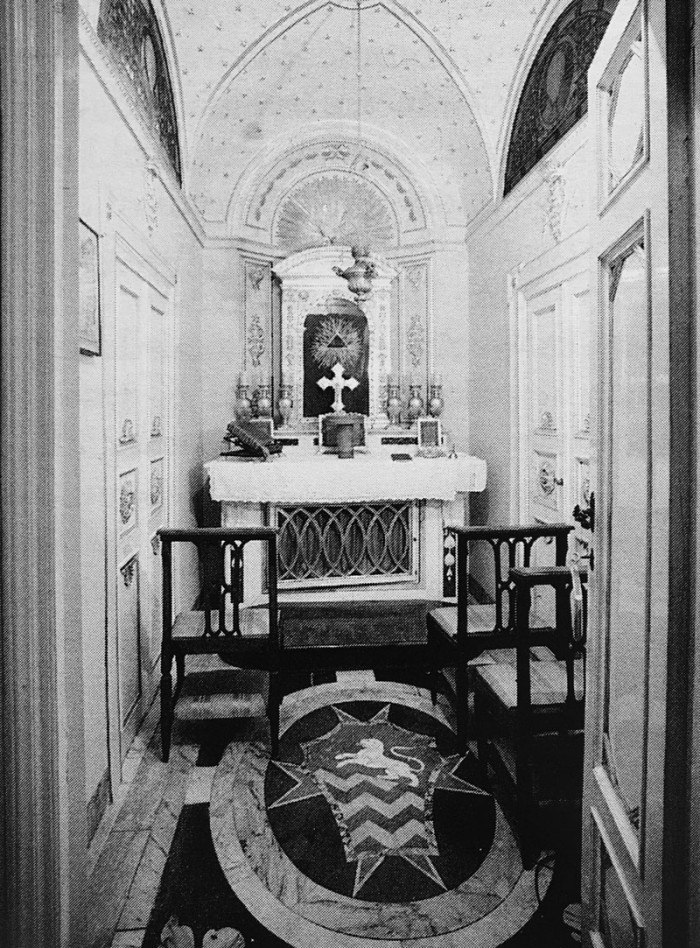 The private chapel that once held the embalmed corpse of Camilla Rucellai. Photo: author.

Tucked in a rear corner of the piano nobile, a tiny rectangular chapel once enshrined the embalmed corpse of Camilla Rucellai, one of Savonarola’s most ardent followers. In 1495, she and her husband, Rodolfo, decided to dissolve their marriage and enter the fervor-filled convent of San Marco. But Rodolfo soon had misgivings, and he begged Camilla to live together again as husband and wife. She adamantly refused and changed her name to Lucia. Perfect name for a seer, which she claimed to be: Lucia was revered in her lifetime for prophesizing the death of famed Neoplatonic philosopher Giovanni Pico della Mirandola. Victorian writers George Eliot and Walter Pater picked up the story, as did Tennessee Williams, who, in “The Resemblance between a Violin Case and a Coffin,” a short story of 1949, writes of “Camilla Rucellai, that highstrung mystic of Florence.” She was beatified after her death in 1520; her shriveled corpse remained in the chapel as recently as the last century. Who knows where it is today! 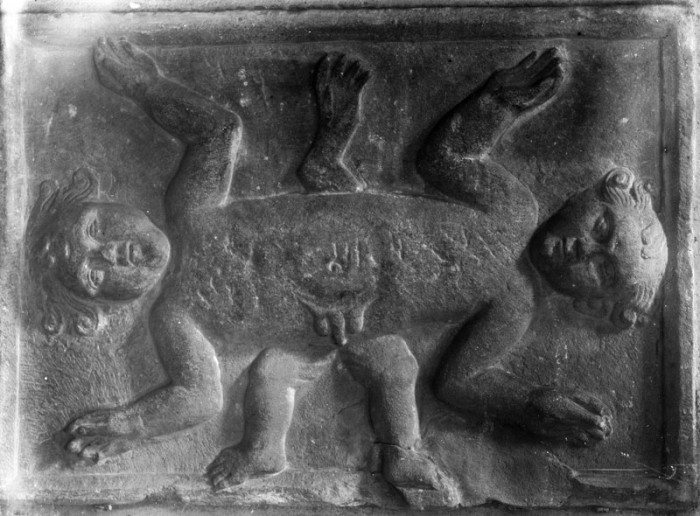 A “monster” similar to the one dissected in the Rucellai garden. Photo: San Marco Museum, Florence.

According to a disquisition presented to the Florentine Academy in 1548, 12 years after the gory event, the “monster” (referred to today as conjoined twins) had “blue eyes,” “purplish skin,” and “extremely white” lower teeth.” In addition to physicians, visual artists were present at the dissection, including the Mannerist painter Bronzino. One wonders how his portrait (now lost) might have looked and where such a picture might have been displayed. Equally peculiar was the location of the dissection—“in the garden of Palla Rucellai,” as opposed to in a hospital, suggesting that there was something covert about this operation from the start. Indeed, the report does not disclose the source of the specimen, offering up only that it was “born at the Prato gate.” Might its “purplish skin” allude to Rucellai blood, to Palla’s seed mis-sown? Was this, then, an illicit birth—damned and, thus, to be destroyed? It is not known what became of the “monster,” whether its parts were tossed in the Arno, shelved under bell jars, or buried in the garden. 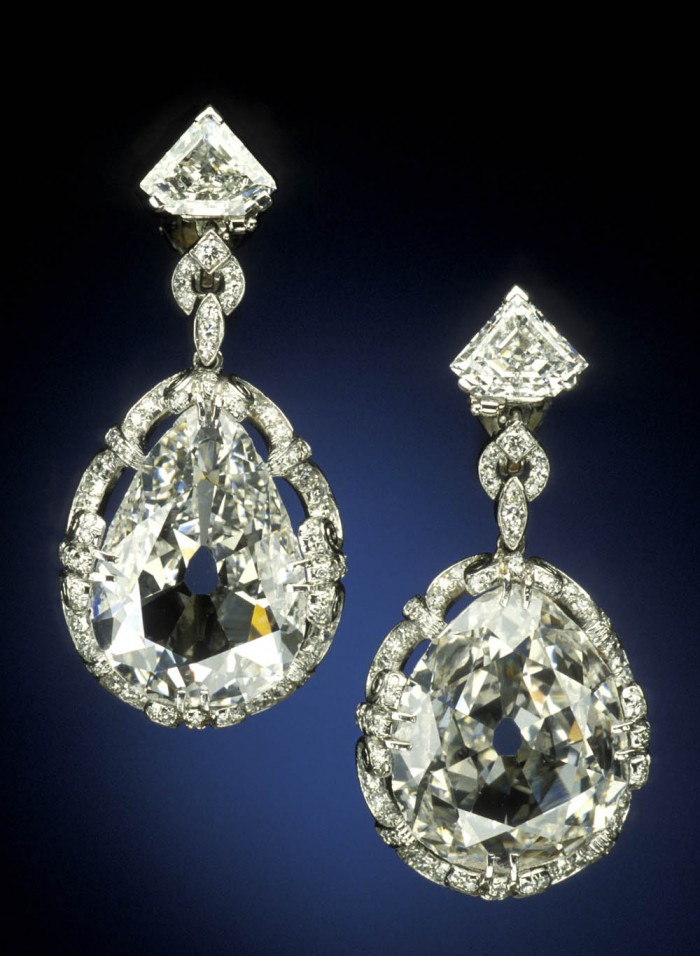 Contessa Lysina Rucellai, the twice-widowed Cossack wife of Giulio Rucellai, was quite possibly the most eccentric and uncontainable character ever to occupy the house. One day in 1927, her cousin Prince Felix Yusupov, the famous assassin of Grigori Rasputin, paid a visit. He reached into his pocket and took out a small jewelry box. Inside were the pear-shaped earrings of the former queen (at one point during the French Revolution, Marie Antoinette is said to have sewn the jewels into her bosom), which had eventually passed into the collection of the Grand Duchess Tatiana Yusupov of Russia. In 1917, Felix successfully smuggled his family’s most precious heirloom out of St. Petersburg, but, in order to finance his exile, he was now forced to sell them. Palazzo Rucellai served as a temporary strongbox before Pierre Cartier bought the earrings in 1928, selling them in turn to Marjorie Merriweather Post. Since 1964, the earrings have been on display in the Smithsonian Institution. 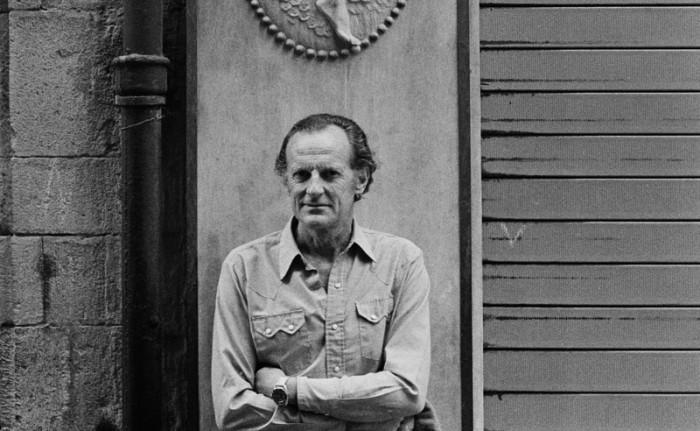 On January 16, 1997, Count Alvise di Robilant was found murdered in his apartment on the third floor of Palazzo Rucellai. There were no signs of forced entry, no indications of struggle. Indeed, the door was unlocked, the lights were on, and an uncorked bottle of Asti Spumante, along with two glasses, had been set out on the kitchen table. The nobleman, it would seem, knew his attacker. 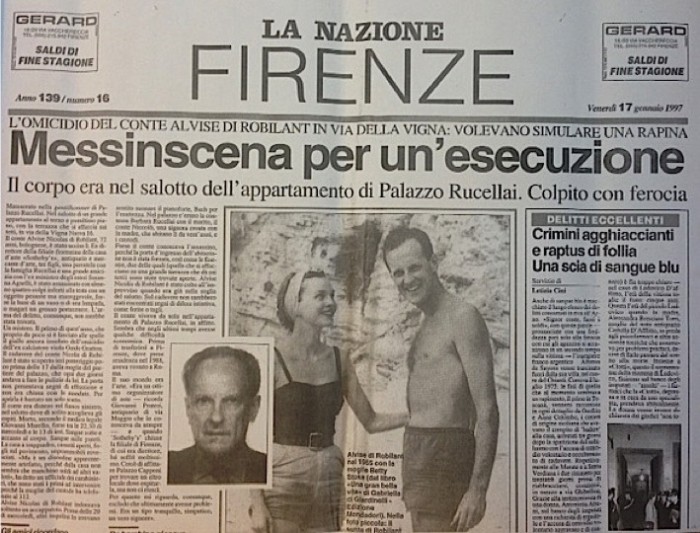 The press had a field day, as indicated by the following headlines: BLOOD IN THE ANTIQUE PALAZZO RUCELLAI; FLORENTINE COUNT MASSACRED AT HOME; MURDER PALACE. Di Robilant’s murder was likened to a giallo, the Italian catchall term for crime fiction. That the case was never solved only added to its allure. Di Robilant’s murder, the Corriere della Sera could only conclude, was “a perfect crime, the solution of which, for now, remains within the walls of the antique Palazzo Rucellai.” 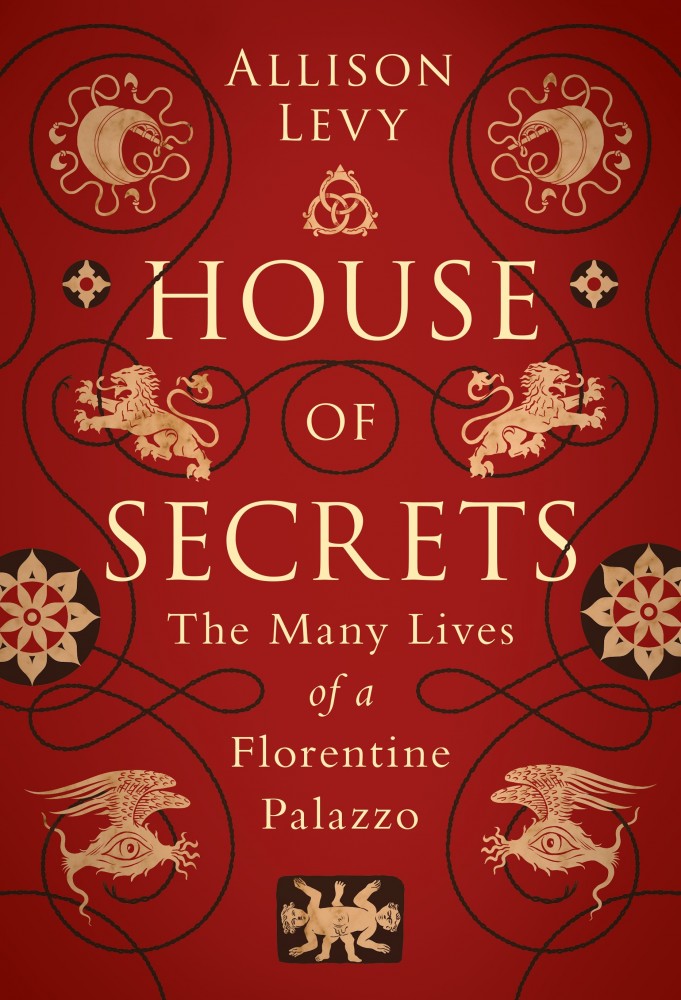 Read more about these and other house secrets as well as Allison Levy’s personal account of life inside Palazzo Rucellai during her sabbatical residency in House of Secrets: The Many Lives of a Florentine Palazzo (I.B. Tauris/Bloomsbury, 2019).

[By clicking these links for your purchase, you support this blog: I receive a small referral fee from Amazon]

Allison Levy is Digital Scholarship Editor at Brown University. An art historian and former resident of Florence, she has written numerous books on the art and architecture of Renaissance Italy. Her most recent book is House of Secrets: The Many Lives of a Florentine Palazzo (Bloomsbury, 2019). For more information, please visit houseofsecretsbook.com