. Vreeland appears to present a balanced and factually correct version of Artemisia Gentileschi’s life, without focusing entirely on her rape and its consequences. How correct are the various art historical facts, like the dating of paintings (as far as we know), the people she meets, the locations and historical events cited? Can we determine what sources she used to write her book? 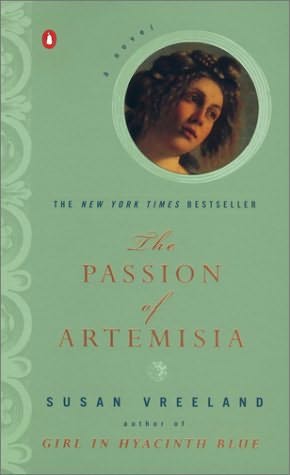 Checking the Facts: The Passion of Artemisia

Over the last ten years, Susan Vreeland has written five novels based on historical painters. While historical figures are frequently the basis of fictitious works, we are often left to wonder if the events and biographical information in these stories are factual or included for the sake of entertainment and the ease of story telling. When reading Susan Vreeland’s portrayal of Artemisia Gentileschi, The Passion of Artemisia, similar questions arise pertaining to the validity of many of the facts. There are no footnotes or other citations to provide the reader with sources, and while the story is presented as fiction and citations may not be necessary, it leaves the fact checking in the hands of the reader. Furthermore, Susan Vreeland’s career has not been one of a historian. She taught high school English for 30 years before beginning to publish these novels (Vreeland bio, 2009). Along with that of Artemisia Gentileschi, she has told stories of Vermeer, Emily Carr, Renoir, and several other Impressionists, suggesting she has not sought to become an expert in one area, but has jumped around in pursuit of an interesting story… she is a novelist after all. The awards she has received for her writings come from literary groups and magazines rather than historical societies and groups, providing hints at her target audience. Still, the number of facts she presents in The Passion of Artemisia is quite overwhelming, and having first published this in 2002, she had access to a wealth of research done on Artemisia over the past fifty years. So how accurate are the facts Vreeland presents within The Passion of Artemisia? I will seek to explore that question within several quotations and facts found throughout the novel.

The Passion of Artemisia is written from the perspective of Artemisia Gentileschi. It begins in Rome in 1612. Artemisia is living with her father Orazio Gentileschi who has publicly accused another painter, Agostino Tassi, of the rape of his daughter. The novel begins with the trial itself and portrays Artemisia as she then moves to Florence and is married to another painter, Pierantonio Stiattesi. While the couple may have stayed in Rome longer than the novel states, the author spends the majority of the book focused on Artemisia’s time in Florence. The remainder of the novel focuses on her career and family life as she tries to balance them. She is accepted into the Academy, is commissioned for and completes multiple paintings, encounters several prominent Florentines, and has children. Given what we know about Artemisia Gentileschi, these basic plot events are accurate (Lapierre, 2007, p. 198-199). While Vreeland takes liberties to describe Artemisia’s responses to these events, she has chosen to stay within the perimeters of what we know for the broad picture. To go further in depth I will examine some of the details Vreeland chooses to include.

The words of the indictment my father had sent to Pope Paul V rang in my ears: “Agostino Tassi deflowered my daughter Artemisia and did carnal actions by force many times, acts that brought grave and enormous damage to me, Orazio Gentileschi, painter and citizen of Rome, the poor plaintiff, so that I could not sell her painting talent for so high a price.(p. 1)

Almost as the opening to the novel, Artemisia is reminded of this letter from her father to Pope Paul V. Upon checking the facts, not only was Pope Paul V (Camillo Borghese; 1605-1621) the pope at the time, but there is a letter in existence very similar to this one referenced by Vreeland.  The undated petition brought suit against Tassi in the early part of 1612 (Garrard, 1989, p. 410). While it seems Vreeland edited it down a bit to suit her writing, she uses similar language to that of the original or at least that of the translation by Efrem G. Calingaert, later edited by Mary D. Garrard. In fact, several terms, like “deflowered” and “poor plaintiff”, seem to be taken directly from this translation. One key difference, however, can be found in Vreeland’s addition of concern Orazio shows for selling his daughter’s painting talent, which seems to be absent from the original. The novel later depicts Artemisia’s relationship with her father as strained following the trial and this difference may be attributed to the author’s creating that conflict.

I rolled up my Susanna and my Judith and my Woman Playing a Lute and fastened them with a ribbon. I didn’t know when my belly would swell…I had wanted to show the academy four completed canvases, and though I’d finished Judith, I had no other full-size paintings. (p. 60) 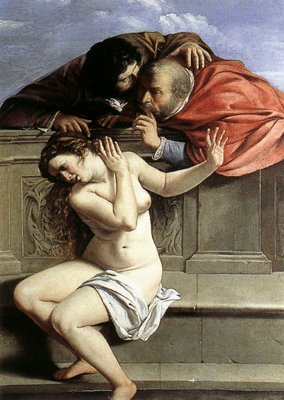 Soon after Artemisia becomes pregnant she becomes eager to get into the Academy. She brings these three paintings, implying that each was completed before the arrival of her first child. These paintings were indeed her first signed completed paintings. Susanna and the Elders is dated 1610, Woman Playing a Lute is dated 1612, and Judith Slaying Holofernes (Naples) is dated 1612-1613 (Lapierre, 2007, p. 199). The last of those paintings is believed to have been finished before her move to Florence, which is where she had her first child. Whereas personal details surrounding her family life and any eagerness to join the Academy may be unavailable, the circumstance Vreeland describes is plausible. This is an example of a part of the book in which Vreeland has pieced together some missing elements, but does not directly contradict known facts.

Eventually I had enough work, and confidence, to show Michelangelo Buonarroti the Younger” (p. 77)…”Might I commission you for a panel in quadra riportaro?” he asked…He opened a copy of Cesare Ripa’s Iconologicia… “Place her against a deep blue sky. Give her a proud aspect.” (p. 79)

Michelangelo Buonarroti explains to Artemisia that this commission will be part of a ceiling filled with paintings. It is known that Michelangelo Buonarroti was indeed a friend and patron of Artemisia He was a strong advocate for her in Florence and did commission the Allegory of Inclination from her in August of 1617 (Garrard, 1989, p. 41). He also must have had a personal fondness for her or her work as she was paid three times the amount of some other painters for her contribution to his ceiling (Garrard, 1989, p. 44). As Vreeland mentions in her depiction of the conversation between the two, it is possible Artemisia already had reputation for depicting female nudes by now. Also, Vreeland is correct in that this piece was indeed for a cycle of ceiling paintings that would have been unified with an idealized blue background (Garrard, 1989, p. 42).

I began working on another Judith Slaying Holofernes, essentially the same composition but with different faces and richer dresses. This time, Judith’s would be deep gold, which seemed to be a Florentine preference, and would have fuller sleeves pushed up in order to do her work. And because Florentines loved Jewelry and decorative touches, I put gold braid on Abra’s headscarf and gave Judith a bracelet with figures of Artemis carved in green stones framed in gold filigree. (p. 101) 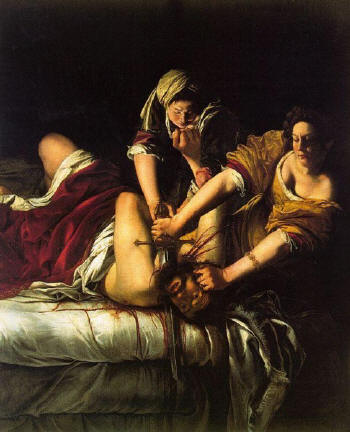 In the novel, this part comes just after she is accepted into the Academy. She is working to impress those who had doubted her ability, and in the effort to continue to gain a name as a painter. This description is indeed an accurate one of the Judith Slaying Holofernes that she completed while in Florence. The pose is extremely similar to that in her previous one, and Judith does wear a deep gold, as opposed to the red, and has thicker sleeves. Likewise, Abra’s headscarf is braided and the jewelry was added. Although dates were largely excluded from the novel, a discrepancy does appear in the timeline within this selection. Artemisia became an official member of the Academy in 1616 (Garrard, 1989, p. 34) while Vreeland explains the creation of this painting to be in the wake of that excitement. In reality, Artemisia worked on this painting in 1620, and it was one of the last she would have worked on in Florence.

The first Judith I painted for Cosimo- you may remember it, the one in which she is slaying Holofernes- Cosimo said he would pay for, but has not…A private word, as his former tutor, might do much to remind him of his promise. (p. 151)

Here Artemisia writes Galileo a letter, with whom she is now on friendly terms. This letter implies multiple things; that Cosimo obtained that specific yellow-dressed Judith and forgot to pay, that Galileo was a friend of Artemisia, and that Galileo would have influence with Cosimo. As was the case with Orazio’s petition to the pope, we have a real letter from which Vreeland probably drew. The letter from Artemisia to Galileo says how she finds herself in this situation. She reminds Galileo of the time he helped her receive an “excellent remuneration” for the Judith she had given Grand Duke Cosimo (Garrard, 1989, p. 383).  The Judith given to Cosimo II de’ Medici was indeed the Florentine Judith, and given the information we have, the letter to Galileo may not be far from the truth. Again, the one problem with this may be the timeline, as this painting was done just before she left Florence and so a letter like this may have not existed until after she had left the city.

In conclusion, Susan Vreeland appears to have made a serious effort to stay factual throughout The Passion of Artemisia. She allowed herself freedom in dealing with the timeline and occasional other details, but for the most part tried to base her writing on events we can prove from Artemisia’s life. While far from a historical record, The Passion of Artemisia serves as an example that historical fiction can be informative and grounded in facts.

About the author: John Blair Hartman III is a graduate student at the University of Georgia, working towards his Masters in Art Education. His interest include, but are not limited to art, music, writing, storytelling, rocking chairs, exploring forests, fly-fishing, ultimate frisbee, foxes, and spending time with loved ones. Upon graduation next year he hopes to work as a public high school art teacher in the southern Appalachian mountains of North Carolina and thus urges readers who can offer him a job there :-) to contact him. (email: jbhartmaniii at gmail dot com)