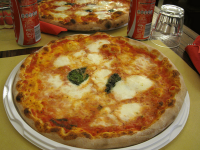 I’m pleased to be able to introduce an unusual form of expat blog. Annie Campbell is from Missouri and has been living in Florence for five years; her boyfriend Fabio is a native Florentine. Together they write Appuntamento Pizza, a blog of Florence pizza reviews.

Appuntamento Pizza’s original function was to act as a personal (yet, shared) archive of Florentine pizzerias. In arrogance we blogged, certain that our words would provide information, or at least amusement, for some lonely souls in search of tasty margheritas… I’m talking about pizzas, here.

We give the phone number, the address, and our opinions (in English and Italian) on the experience to be expected at the over 42 pizzerias we’ve reviewed so far (with hundreds to come!). For our readers, the blog has become a sort of glorified yellow pages. Still far from our hopeless dream of becoming rich and famous bloggers, we do have the occasional fan, if I may use that term, who writes us for advice on their pizza problems. We LOVE getting feedback and suggestions on which pizzerias to try. It’s our goal to eat at each and every pizzeria in Florence (and surroundings!) and to then return for a second visit. We’re going to be busy for a while!

Method in our madness

For the most part, Fabio and I usually order the margherita. It’s more his theory than mine that one can only judge a pizza’s worth by the scrutiny of its base form (see our first review of La Smorfia). We have been known to get the occasional pizza con porcini, and I rarely pass up a pizza with potatoes.

A pizza is judged, primarily, on its three key components: the crust, the tomato sauce, and the mozzarella. Pizzas are given a vote out of ten.

The pizzas come to the table. They are appraised from an aesthetic point of view. The photo is taken. We take our first bites, together. Silence. Either a smile and a head nod emerge, or the raised eyebrows that appeared at the sight of the pizza form a grimace. The first halves of our pizzas are consumed in quiet contemplation. Then we begin to talk, and, more or less, we usually agree. I seem to be a little less forgiving as a reviewer than Fabio.

We say Tuesday night is our Pizza Nite, but some weeks it doesn’t work out that way…but we don’t mention this to the readers of the blog.

Is there anything bad about pizza blogging?

arttrav note: I asked Annie if there were downsides to their self-appointed job as pizza experts, and not surprisingly, there are…

We love pizza blogging, but there ARE some downers that come with the responsibility:

Our top-voted pizzerias to date are: Gustapizza, Enziono’s at Caffé Italiano, and Il Pizzaiuolo.

It’s a tough job but someone’s gotta do it. It’s a sacrifice for all of us – now check Appuntamento Pizza before you test out that new pizzeria!

Arttrav has strong opinions about pizza too.