Historyteachers videos in the classroom: interview with Amy Burvall

If you thought history was boring in school, it’s because you didn’t have Amy Burvall as your teacher. This Hawaii educator, better known as part of the youtube duo “Historyteachers“, sets accurate historical information to the 80s music we all know and love (think: happily singing about burning at the stake to a tune by Human League). And then shows the video in the classroom.

Thanks to recent media attention, the 50 videos uploaded since 2008 by Amy Burvall and her colleague Herb Mahelona have over one million views on youtube and a ton of positive comments too! My mom actually sent me the link to “Renaissance Man” (set to Blister in the Sun by the Violent Femmes) since she knew I’d want to blog about it, and she’s been carefully watching every video they’ve made.

AMK: From a didactic point of view, clearly you’re looking to reach the new media-savvy generation and it’s working great. Can you tell us more about how you use each video in the classroom? 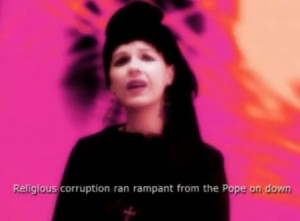 Yes, I think it works great. Students say they can’t get our lyrics out of their heads, which is a good (albeit sometimes annoying) thing. At first I would use them to wrap up a unit in a fun way, and encourage students to use them as study guides prior to an assessment. Now I also use them as “hooks” to introduce a lesson and get them interested… that way I can refer back to things in the video and they can visualize what I’m talking about.

It also works to discuss synthesis of information (research- based) into a more creative, multi-media format that can be shared with a wide variety of people. Much better than the old student-writes-research-paper-only-for-the-teachers’-eyes-and 2-people-max-benefit.

We live in a culture of remixing and mash-ups, but students enjoy discussing the benefits and drawbacks of appropriation of art (we do a mini unit on parodies of Renaissance art).

I focus quite a bit on the power of art (listen to me Simon Schama and Nigel Spivey!) and its influence from and on History. That’s why I try to incorporate a lot of famous works in the vids (we will be doing more of that), and the students can discuss our work as art, as well as the songs of the original artists that we’ve re-purposed. [AMK: Like in Renaissance Man below.]

It is of course necessary to go over the points in class. I try not to be biased but really we are telling a story and A LOT has to be left out in a 2-5 minute song that fits to a rhyme scheme (we have to re-work things, but try not to be incorrect, per se).

We can also play around with words because it’s basically poetry (see Shakespeare video when I say “taming of the shrewing”).

AMK: So, does each video relate to a lesson unit? Some might say you can’t reduce a period of history to three minutes. How do you make sure that students also take in “the whole” – including material not in the videos?

Most do relate to a unit I teach, but I am now teaching a different course that begins at the Renaissance and need to get to writing more modern history songs. The problem is, the topics are endless! People have asked us to do American History, but that is not where my passion lies and it’s hard to write something in a forced way.

My classes are 90 minutes, so a 3 minutes video does NOT replace any normal instruction or educational activities. The songs are really meant to be an overview of major points or vocabulary. The only exception would be some of the songs that I write in the first person, from the point of view of that character (see “Odyssey”).

AMK: The Star article mentions that you are having students create their own videos. Can you tell us more about this?

A while back students suggested they do similar videos as a culminating project option (I stress option since I always give a variety of project choices – not everyone is comfortable with this sort of performing). Each year they get better and better, and I am surprised how many students, who aren’t even in the school choir, want to do this project.

They have a very detailed project/task description and since we are an IB school we use rubrics based on certain criteria rather than traditional letter grades. This is great because a student’s video might be awesome, but their lyrics could be shallow and not reflect evidence of appropriate research.

During the process students must narrow down a topic, choose a song to parody (though some have written original ones!), compose several drafts of lyrics, record using GarageBand, watch and critique existing videos, storyboard their video, plan filming, organize costumes and props, shoot video, and edit. After the project they write an extensive reflection. A 3 minute video can take 1 month for a high schooler – plus we are doing other things. There will always be tech problems to deal with! That’s a learning curve for some, but those that plan well and storyboard out everything and save often are usually good to go.

I let them use friends in the videos but always this is an individual project. I have had students write the lyrics and produce the video but have a more talented friend sing the song or perform.

The student turns in the movie file digitally (usually Quicktime) or burns it to a dvd. One year we got so into it we had awards like the MTV awards! Students came up with the categories, like “most Historical”, “Best editing”, “Most entertaining”, etc. Some students have posted to Youtube if they have an account (see my favourites on youtube for one example).

Some students have used this idea for other classes, or for their IB personal project.

AMK: Using social media or new teaching techniques of any sort can be… disruptive. How has your school supported your video-making?

My school has been extremely supportive – they have even purchased more tech equipment for student use (mics, green screen, laptops, etc.) They are getting a kick out of the publicity Herb and I have been getting. I think quite a few schools in Hawaii are trying harder to reach 21st century learners with more collaboration, inquiry-based learning, and technology integration.

AMK: The videos are really well produced! Do you actually own a blue- or green- screen? And where do you get the video clips?

All the equipment used is our own, except for the green screen (we used to use a wall and now use an official screen). We both have Macs, and Herb purchased a ton of Adobe software. He is a musician in his own right, so all of the instruments, mixing board, recording equipment, etc. are his. When I have students do vids, they usually purchase a karaoke style version of the song from iTunes, or find a midi file online.

A lot of the clips we use are from classic films (Spartacus, Cleopatra [below], or check out that really old one in Pompeii), or documentaries (History Channel, BBC, A and Etc.). A lot of times it’s films I show some or all of in class. We are trying to get away from that now and use more art from the period and/or original animation (Herb creates in Flash). Sometimes we’re using clips from 10 films, so editing gets tricky.

That is one major reason we are not selling any of our videos – until we get explicit permission to do so, we cannot. So, we haven’t really made a cent from anything we’ve done. If anything, we’ll create original games and lesson extensions to go with our videos and sell those.

AMK: Do you have a list of periods or topics that you want to cover that you are checking off, or does inspiration just come to you?

I do! I have a running list of songs I love and want to cover and topics of people and events or time periods. At the moment I am busy so I have a bunch of half-written songs lurking around.

The best songs are ones where the inspiration just came to me… like while driving in the car. Some lyrics are meant to sound like the original (those are the most memorable) but some just match the feel of the music.

AMK: Plans for the future?

Yes, a website is in the works; the url will be www.historyteacherz.com but nothing is up yet… we are in the planning sages but I assure you it will be fab!

With hearty thanks to Amy for taking the time to answer my questions, I hope this encourages others to use video in a creative way in the classroom! Historyteachers is now on twitter @historyteacherz and also has a facebook fan page. Now, for homework, go watch at least three videos…

And for another example of video use in coursework, see the student biographical films about female artists that I did with 300-level university students.