My apartment in Barcelona: Eric Vokel Gran Via Suites

I’m just about ready to call Eric Vokel Gran Via Suites home… it’s only for five days, but we’ve very comfortably moved in and nothing’s missing, so we could stick around pretty much forever!

It’s been a while since we’ve taken a good “European city” trip, so Tommaso and I searched for a good excuse to take a cheap flight to Barcelona and stay in a luxury apartment rental. Our 7 year wedding anniversary is in a few days so that’ll do as an excuse. Barcelona makes a great long-weekend trip from Florence, Italy – there’s a direct flight with Meridiana that costs around 200 euros return – like going to Milan and back twice on the Eurostar – and the flight duration is about the same as taking the ATAF bus downtown and back, once, at rush hour.

From our home in Florence to our adopted home in Barcelona, via flight, airport train and metro, we arrived at Eric’s Gran via Suites in about 3.5 hours. Although this just-renovated apartment-hotel building has reception service until 6pm and then an automatic check-in service (plus security/doorman), manager Marc and reservations manager Florencia stayed late to greet us. We have booked 5 nights at a special “blogger rate” that I negotiated based on the fact that this chain of designer apartments is super social and very attentive to reviews. Being so web 2.0 has paid off for them: their other 2 buildings are ranked #2 and #4 on TripAdvisor… I wanted to check it out for myself and can confirm that everything you read on TA is true: this place is great.

The building and the area

Gran Via Suites is the third building by this Danish designer who likes design furniture and calm spaces in the middle of a bustling city. While the first two buildings are a gaudiesque stones’s throw away from the Sagrada Familia in the chic Eixample Dreta area, Gran Via is on the wide street of the same name in the Eixemple Esquerra – which used to be the left side of the tracks, but is now a bustling upper-class residential neighbourhood (not to mention the heart of the city’s gay area).

The whole area of Eixample was designed as an expansion plan in the 1850s by the social idealist and military engineer Ildefons Cerdà. It’s characteristic form is best seen on maps: each block of apartments is an octogon. Beautiful avant-garde buildings, original to this building plan, alternate with a few more modern ones. Gran Via is a main thoroughfare but traffic is not very heavy, and there is a bike lane and pedestrian path down the center, plus the whole thing is mitigated by decades-old trees that, when seen from above, make the street disappear.

Gran via from above: the top floor of Eric Vokel’s building

My first concern was that this was not the best location from which to visit Barcelona, but we saw that there is a Metro station (Rocafort on the red line 1) just 2 doors away, so we figured that with a transport pass we would get anywhere we needed to go. Upon arrival we were pleasantly surprised to find that we’re walking distance to a number of things, including the area of Montjuic (at least the lower part) – it’s only 20 minutes by foot to the Fundacio Miro and other museums in Barcelona!

The second concern was that this area would be loud, as the building is on a big street. I am super sensitive to noise! No problem, again: our apartment touches interior courts on BOTH sides, and we’re on the 7th floor, way above the street. It’s perfectly silent and we slept like logs. 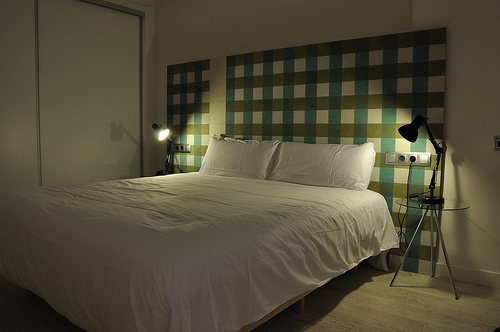 Bed in which we have been sleeping like logs.

The building itself, from the turn of the century, has been totally gutted, leaving only the wrought iron entrance door and the antique elevator (truly funky). It opened just one month ago, on April 4th, a few days earlier than planned, and everything is finished and functioning – wifi, tv, phones, etc. I say this with wonder because I feared that they’d not open in time, but Florencia assured me that everything would be ready – and it was. I guess that’s one difference between Spain and Italy!

I’m a veteran at staying in tourist apartments or short term rentals: I like to cook for myself most of the time, I usually try to stay a longish period in any city, and I’ve done a few extended stays in my dissertation-research years, so I have a good sense of what is usually missing from these places. Eric and his team have done a great job of providing just about everything you’d want in a home, as well as in a 4 star hotel.

You do get: pots and pans, knives, cutting board, small appliances, a kitchen sponge and soap (rare), a hairdryer, shower gel and soap (but not much else in the bathroom), and hotel-style crisp sheets. You don’t get slippers or bathrobes – if you want that, go to a hotel – nor do you get throw pillows or blankets, or big tea mugs – for those things, I guess I just have to stay at my own home ! My one “design” criticism: there ought to be an extra light over the mirror for make-up and mens’ shaving. 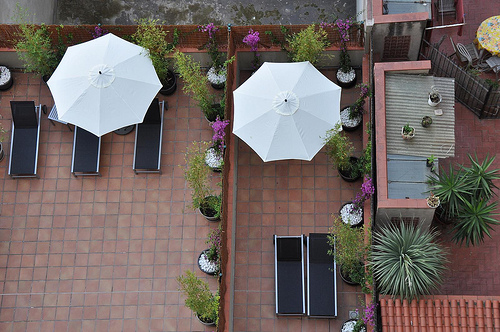 View from my balcony, down to two units that have courtyard-gardens

There are 29 apartments in this building, with different floor plans from the one bedroom that we have to the super duper four-bedroom (whose kitchen/living space I’ve photographed above). Some have terraces; ours has a balcony with a table for two overlooking an inner courtyard, where the sound of children playing rings out during the day. I got to peek into some of the “premium” units which are very nice indeed, though I’m very happy with our basic unit that has the very same finishings. You can tell that the renovation was done to last with good quality tiles, doors and taps, so I think this place will wear well. It’s the first time I’ve stayed in a hotel that has design features I’d actually choose for my own home.

We’re excited about our stay here in Barcelona – a good night’s sleep, a comfortable kitchen, and a great location are, for me, the essential factors upon which the rest of the experience is built. And having started out right, in such a central location, we are enjoying Barcelona a lot.

See more Barcelona on arttrav: my take on Museums in Barcelona & more photos on Flickr & 5 hipster things to do (upcoming).