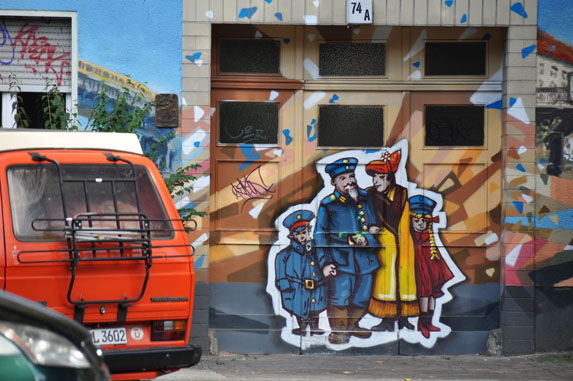 If you take the U1 line or any other above ground train around Berlin, you’re liable to notice some impressive examples of street art as you roll by, though, unless you are a real connoisseur, you’re not liable to know who they’re by. In comes Vanessa Brazeau, our guide on the Berlin street art tour offered by Vage in collaboration with Finding Berlin tours. During our private 2.5 hour walking tour, she not only showed us some of the highlights of the Berlin scene and talked about the artists and stories behind them, she also explained some of the mechanisms behind street art and the contemporary galleries that support it.

Vanessa has only been on Berlin for five months, but this young Canadian art graduate, and street/performance artist in her own right, is already a player on the street art scene, having co-founded a business with George Ironside, an Australian (woman) who has been in the city for four years. They offer weekly social events that put together the public and artists as well as street art tours on bike or foot for corporate or private clients that can also be combined with tagging or painting lessons – not on public property, she assures me. As we walk around she keeps up a steady stream of chatter about friends from around the world and the art they’ve done in Berlin , and I wonder if it’s that easy to integrate in the city or if she is just exceptionally outgoing. 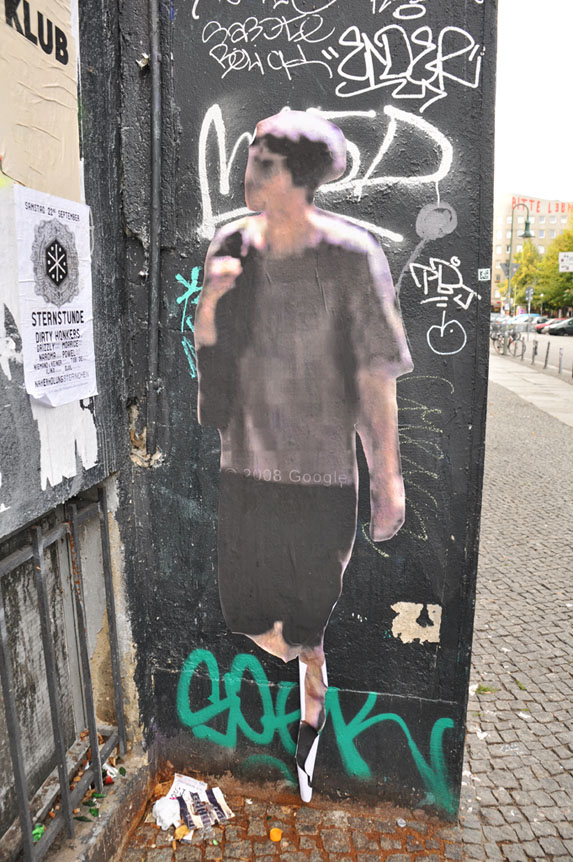 We started our tour on the pedestrian overpass at Warschauer Strasse U1 station that looks over an expanse of tracks. To our left is an area that is owned by a developer but has been rented for cheap to a kind of collective that is supportive of street art. They’ve set up an outside bar, converted a warehouse into exhibit space, and “commissioned” many of the city’s artists to paint sections of walls. There’s a trailer graffitied with the words “Finding Berlin Tours .com” which is where Martin, tour company owner, vintage fixie bike appassionado and street-art supporter is based. He’s the one who arranged for our meeting with Vanessa, who sometimes takes groups out on Martin’s super cool bikes.

If you walk to the right of the station, rather, you come to the historic Oberbaumbrucke bridge over the river. Vanessa points out the preserved section of the Berlin Wall which is nearby, but my attention is more attracted by a huge figure of a man adjusting his tie, wearing handcuffs. I can see it from the bridge, practically dominating an important view of the city. And the artist’s style is pretty unmistakeable: it’s by Blu. 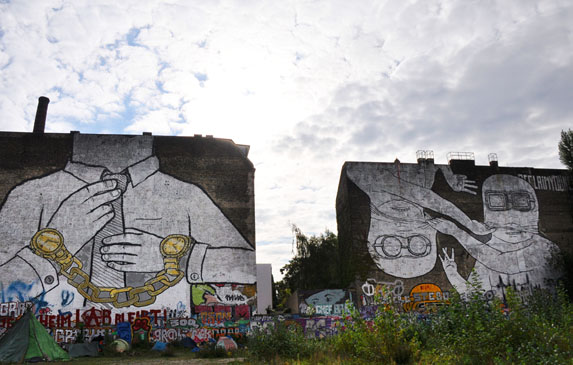 As we walk around to get a closer look, Vanessa explains that this is an uninhabited lot that has been given over to vagrants and on which it is permitted to paint. There’s a fence around the lot, with a large opening through which you can see tents set up. Are we sure it is safe to go in, I ask? Vanessa assures me that it is. She knows half the people by name. To prove her point, a man rides out on a bicycle and greets us as he passes.

The two large pieces by Blu are “crane works” and the one on the right was a collaboration with the French artist JR (of TED prize fame) who pasted eyes in the now empty area where they ought to be.  The eyes washed away with the rain after a while. Blu, an Italian street artist active since 1999 and arguably one of the most famous, was in Berlin from 2006-2009. 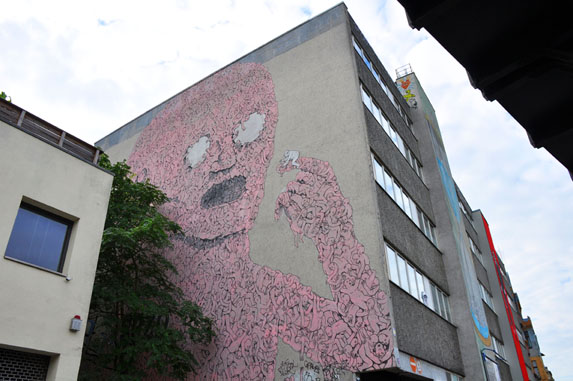 Blu animation of a man-eating man

Not far from here, we arrive at another work by Blu, the static remains of one of his animations, full of little pink men. Around the corner there’s an inner courtyard decorated with local artist Bimer’s interpretation of the Berlin bear. 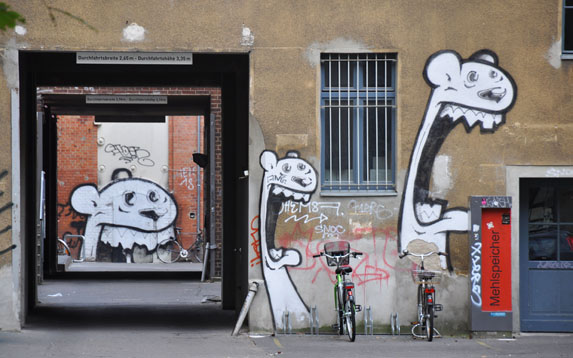 Still nearby, another alley has attracted some young boys and a motorcyclist who are admiring and photographing the colorful tags. Seems some people are out on their own street art tour. 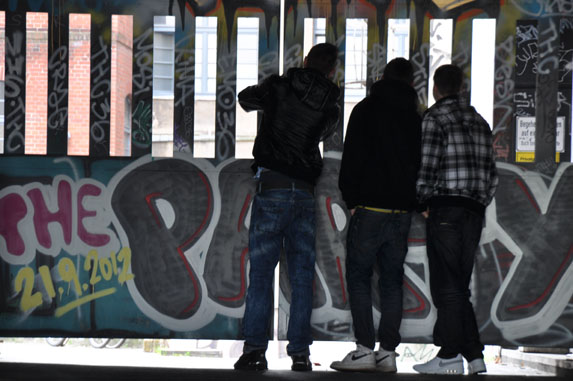 Youths in an alley admiring tags 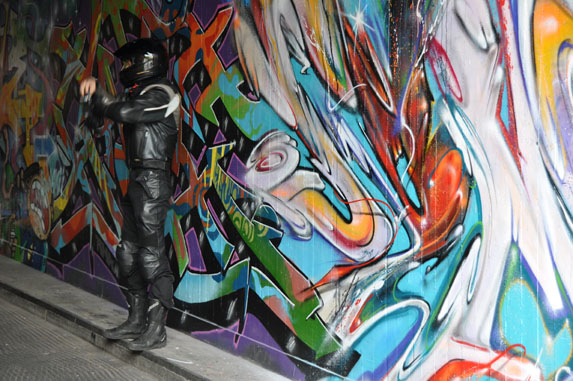 We proceed in the area of Kreutzberg, which Vanessa says has strongly resisted gentrification and in many cases also embraces street art. This – and an apparent lack of city planning regulations on the appearance of exteriors – has led to the commission of street artists to paint anything from store shutters (about 300€) to the sides of 5-storey buildings. 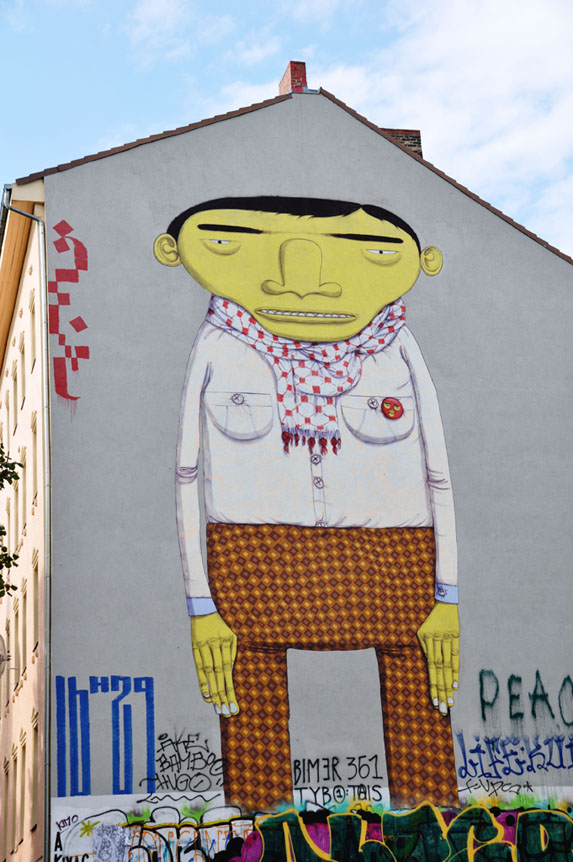 An example of this is a figure of a man painted by Brazilian artists Os Gemeos, identical twins who each do one side of the figure yet end up with a unified looking piece. International street artists like them usually work with a local contact (calling him an agent would be excessive, but basically summarizes the role) who would either approach, or be approached by, a building owner with a good wall. Vanessa and George, in fact, are able to play such a role. 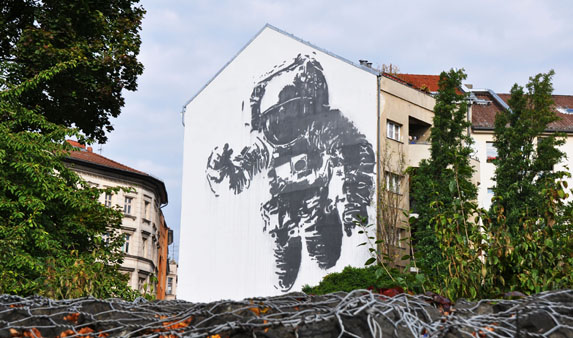 Down the road we see another international piece by Portuguese artist Victor Ash that depicts an astronaut, and a charming building painted by a London-based duo called the London Police. 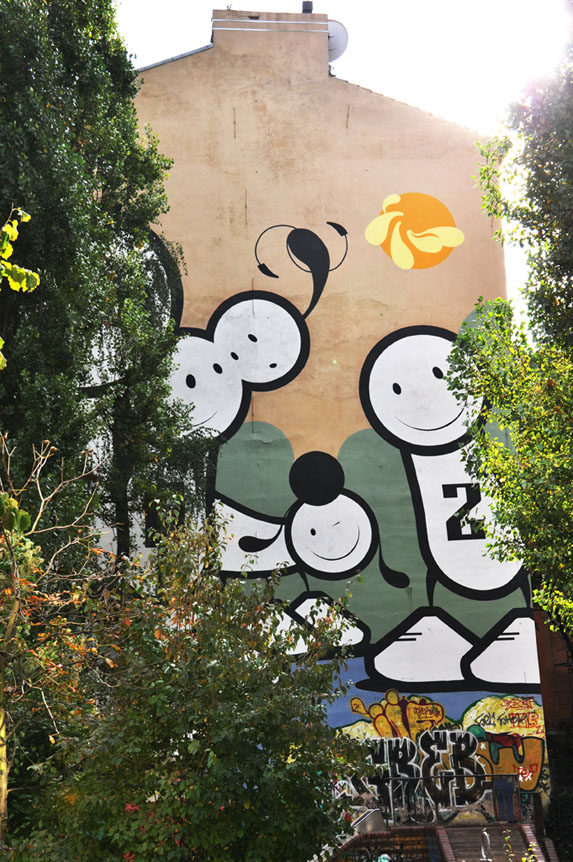 Wall by The London Police in Berlin 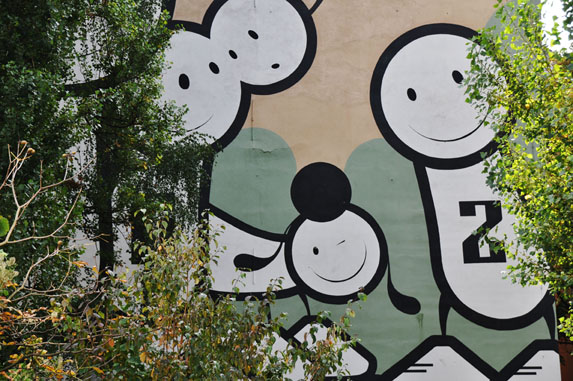 detail of piece by the London Police

Our guide has talked to most of these artists and recounts insider stories. One realizes the ephemerality of this movement when a girl who has been in town 5 months has seen these pieces go up, be tagged over, and evolve. It is a history of art that is taking place before our eyes and deserves to be observed for as long as it exists.

Insider tours like this give the visitor a unique opportunity to understand the inner workings of a city. For me, I was curious to figure out what elements make Berlin the cultural and start-up mecca of the moment (I’m writing about this for MakeTank), and speaking with Vanessa gave me a few hints. Berlin, she says, does not look much towards the future. Temporary spaces, galleries and stores pop up easily, with some bureaucracy but nothing impossible or expensive. Regulations on the sale of alcohol in such spaces are lax, making them economically viable. Spaces are large and available for cheap: a prime example is Vage’s office space inside an artists’ collective, The Wye, that takes up 5 floors of a building rented to them by the shrinking post office. Such spaces provide a point of encounter for creatives to generate synergies. 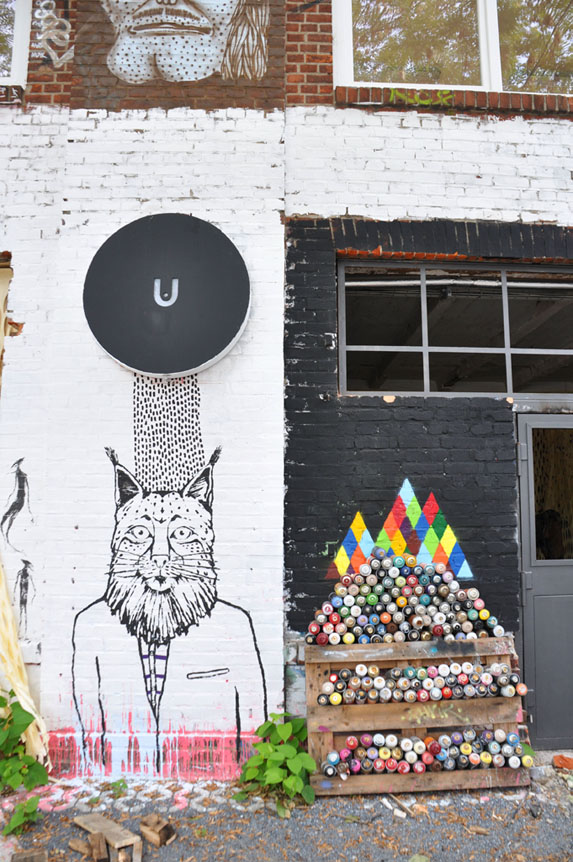 Berlin’s creative industry is unique and very active right now. For the traveler wishing to get a better sense of what local elements feed this creativity, the best way is contact with locals. Attend Vage’s Tuesday night artist parties, look for other local events, or take a tour like we did. 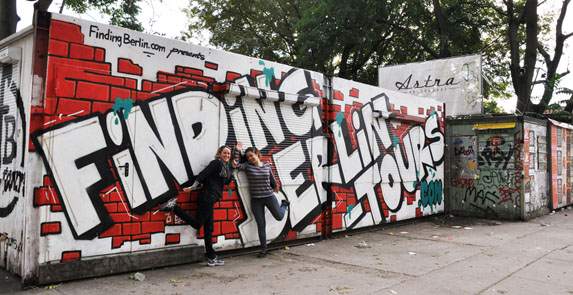 Vanessa and I at the Finding Berlin Tours trailer

With thanks again to Vanessa and George (Vage), and to Martin of Finding Berlin.

I asked Vanessa to do a brief video presentation of their services: