Ofelio is of a category of artisans that is not trendy right now. The kind artisans that nobody writes exalted articles about nor photographs in their workshops, and probably if you tried to interview Ofelio or photograph him he’d tell you to f-off out of modesty. He has no idea that I took this picture of him by faking checking something on my smartphone. But I wanted to record it: the guy who fixes old purses. Purses, suitcases, belts, and anything leather or plastic that’s bigger and more complex than a shoe. Ofelio, like other artisans who fix rather than create new things, gives new beginnings to old goods. 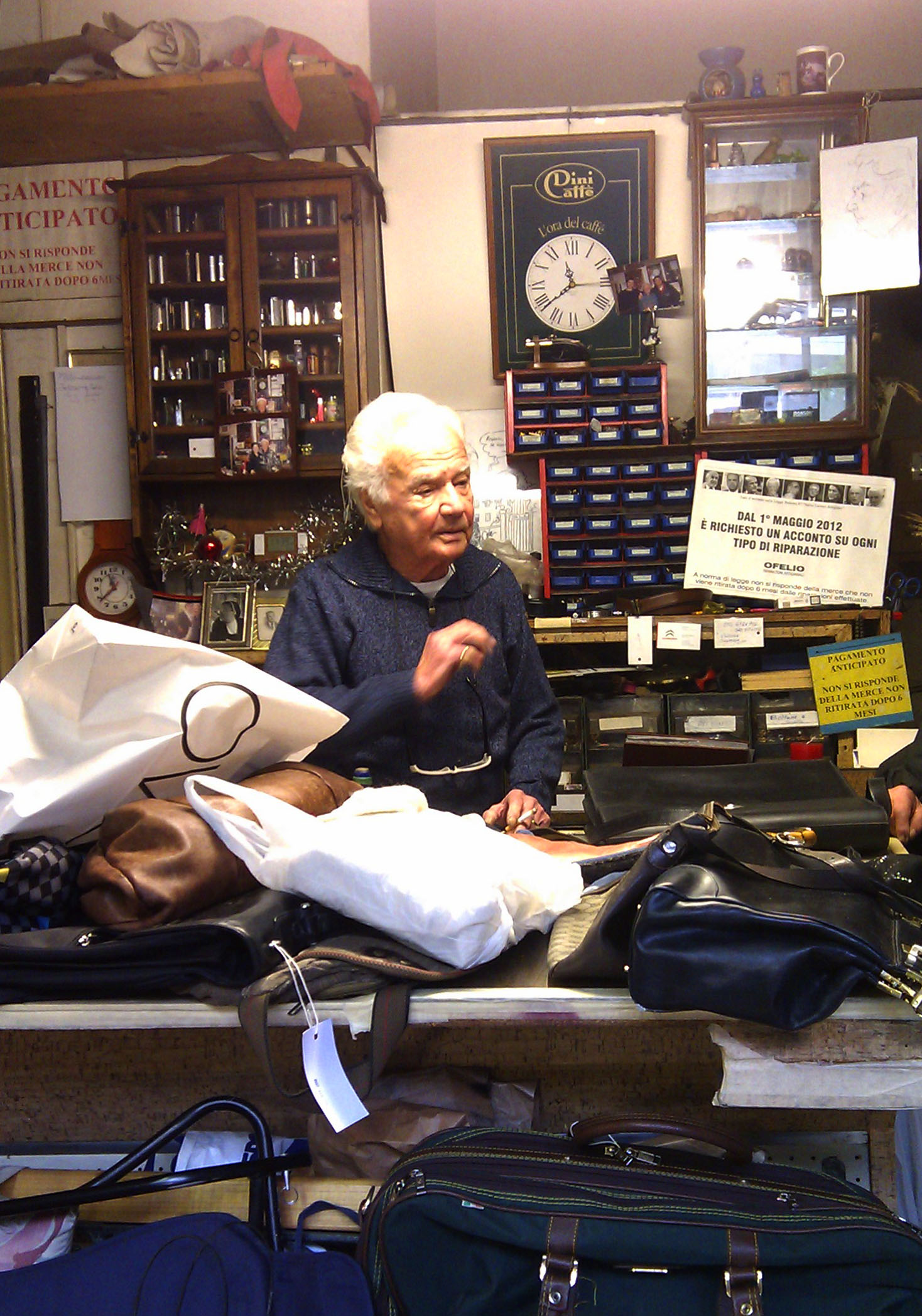 Italy is, unquestionably, a true consumer society. You see it in their new purses, fashionable clothes, and in their pre-teens who own iPhones that I, myself, cannot afford. But, at least traditionally, Italians tend to buy less than their American counterparts, and again, traditionally, of better quality. Thanks to the global presence of H&M, this is no longer the case, although it is technically possible to buy good quality, Made in Italy knitwear, leathers and more as I’ve described in this blog post about my client, BP Studio.

But it seems to me that Italy is slightly less of a disposable society than, say, America. There is still a culture of fixing things. It’s dying out, but it’s still there. We have to hope that it will be able to continue.

I recently brought a bag to Ofelio to be fixed and I asked him what his opening hours are, since his shop has no sign and no posted hours. And he says “orario di bottega”. Workshop hours. I asked for further specification, and he said he comes in around 8:30, unless he has to prepare the grandchildren for school, and he closes around 1 or 1:30, and goes home for lunch, and reopens in the afternoon, when depends on what he ate, and leaves again around 7:30pm, but sometimes later, since he has a lot of work, and he has no help to do it. I asked him why he didn’t take on an apprentice, and he explained that due to the type of “company” he is registered as (I didn’t ask for details), he can’t hire anyone, not even an apprentice to learn his trade. Ofelio is not exactly a youngster and I wondered who would take over for him when he was gone (but didn’t dare ask). He read my mind: he said that when he can’t do the work any more, he will have to close down the shop, because nobody wants to do this trade.

There is still demand for artisans who can fix things, but the difficulties of running a business in Italy, with its various taxes and limits, perhaps does not appeal to young, potential artisans. Go into any besoke cobblers’ these days and you will see Asian trainees. The shoemakers’ shop on my street, in fact, recently changed hands; I noticed that the new owners are Indian, and they immediately improved the shop greatly by adding a sign and being open on weekends (the previous owner hadn’t thought of these modern marketing things that might guarantee sufficient income to beat the tax man). Asians seem to be thrilled to learn Italian craftsmanship and carry on traditions that are not theirs.

When there are people who fix things, you save money and also contribute less to landfills. Beyond shoes and purses, people who fix small appliances are hard to come by in America, but here in Italy, they still exist. A little neighbourhood store called Speranza gives a last grain of hope (speranza) to blenders, vacuum cleaners, fans, coffee makers and irons that might otherwise be thrown out. The store’s back room is just seething with dusty, dinged machines waiting to be fixed. There’s always a line, and I keep going back with broken things despite Signor Speranza’s distinctively unpleasant personality.

Maybe there is a little speranza for people who fix things, though. Two related factors could contribute. The first is the economic crisis, which makes us think twice about buying new things if we can maybe fix the old stuff first. The second is that vintage clothing and accessories have become very trendy again in the past two years – this phenomenon actually stems from economic need but then was promoted by trend-setters so that now there’s some rather expensive used clothing shops that have nothing to do with Goodwill. But if we’re currently appreciating older objects, we’ll also need to mend or fix them, so we’ll need people like Ofelio and Speranza, and hopefully their descendents, to keep doing their jobs.

Every month, a few awesome female Italy bloggers write on a given theme. The theme for January is “the beginning” and it wasn’t at all easy to come up with what to write for it, despite seeming like an obvious theme for the New Year! This month a few of us had other things to do so the other two bloggers who have written on the topic are:

So we were thinking… if you write a blog about Italy, or if you write a blog in general and want to participate, how about trying your hand at the topic “The Beginning” and letting us know by tweeting it with the hashtag #italyroundtable. Maybe link to one of our posts, or tweet at us so we find you. We’ll retweet and share your posts from the Italy Roundtable’s accounts! Deadline: the end of January, let’s say.