Drinking the mayor’s water in Florence 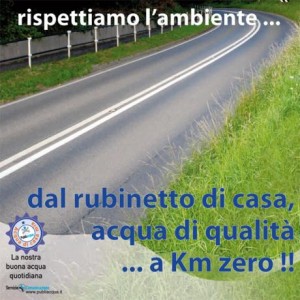 Can you drink the tap water in Florence? Sure, but it doesn’t taste great (though it’s better now than it was when I got here a decade ago). However, Publiacqua and the city of Florence have launched a major campaign to “drink the mayor’s water”, i.e. tap water. And the Fontanelli ad Alta Qualità, or filtered water fountains, finally make this a viable alternative to bottled water.

For most Italians, tap water is “no good”; used to decades of hauling and drinking bottled water, often preferring frizzante (what’s that in English? fizzy water?), it’s hard to convince them to drink tap water. Italy is the third largest consumer of mineral water in the world. And Tuscany? the worst consumer (ie highest) in Italy.

But things are changing this year with the installation of these “fontanelli” at which you fill your own bottles of filtered water. It comes out cooler than from the tap (at 15 degrees), and it is delicious. From the mini purification plant to the tap there’s no distance for the water to travel and pick up things that make it less pure. 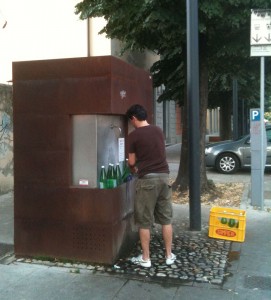 In 2009, 6 million litres of water were distributed from these fountains, saving families over a million euros in water, and avoiding 15.000 kilograms of plastic, or 1.5 million bottles, from being introduced into our delicate environment. (These are the numbers from Publiacqua for all the fontanelli, Florence, Pistoia, Bagno a Ripoli etc.; in Florence itself it’s 3.3 million liters of water in 2009 and 1.9 million in the first 6 months of 2010.)

We acquired a plastic crate and a dozen glass bottles which we fill weekly at our neighbourhood water fountain (in the photo: husband doing this duty). I have a brita filter and use tap water for tea and coffee, and I drink that water in a pinch, but for some reason it tends to give me headaches so I prefer to avoid it. My in-laws are also fans of the fonatello and have purchased a device that makes gassy water out of flat water

There’s a fountain about half a kilometer away from our house. It’s great to see people of all ages biking, walking, or driving up to it, often stopping to talk to each other about this great invention. It’s a strange throwback to the days of communal services like a washing basin or bread oven!

Where are the Fontanelli in Florence?

For now, in the city of Florence there are seven fountains, one of which (at the Anconella park) has been recently fitted to also distribute frizzante to the joy of many Italians. These are all in areas outside the ring roads, so it’s not useful to tourists but aimed, rightly, at residents. There is a nice map on the Publiacqua site that for some reason I’m having trouble embedding here, so click the photo below to see it in action on their website. (Please consider that I did not make this map!) 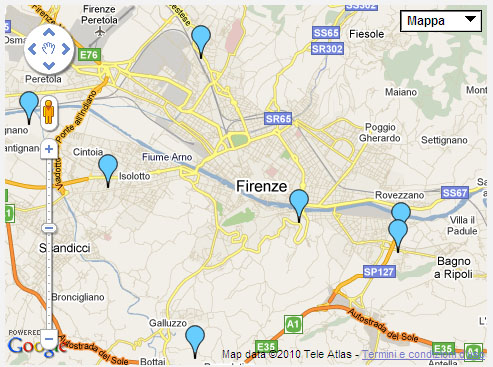 Plans for the future of drinking water in downtown Florence

The best news, though, is the plans for the future. In 2011, Publiacqua will be installing these fountains at hospitals and museums. (In a recent stint at Careggi hospital, in fact, I was given multiple bottles of water…) First target for downtown Florence is via Ricasoli outside the Accademia museum. And there will be an international contest to design one that will go beside Palazzo Vecchio behind the Biancone (Neptune fountain), assumedly to replace the current “nasone” style tap.