See this sign? It’s the stop sign before a rotonda (roundabout) on my street. It’s a universal sign that means stop. You know that. I know that. And at least 32% of the people who drive past it every day know that. 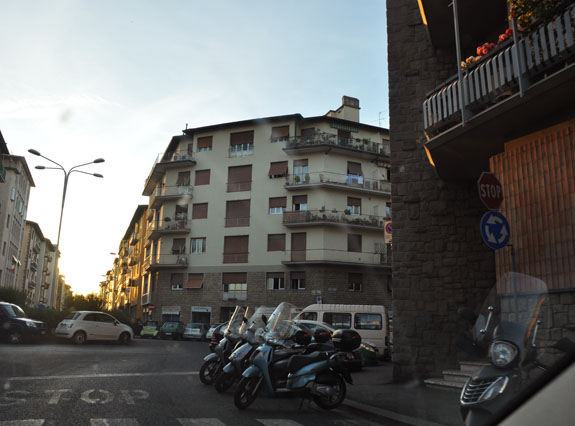 Is it that hard to see?

This stop sign, and others in its category, is optional. I know it looks just like the obligatory ones you learned about in driving school at age 16, but in Italy, stop signs before roundabouts or at merge points are really a matter of choice, and it’s up to the intelligent driver to decide if to actually stop or to consider it more like a yield sign. To confirm this, I stopped at a stop sign the other day where two streets merged and got honked at; last night, on the other hand, my father in law ran a stop sign at a similar intersection in front of a stationary police car and did not receive a ticket, not get honked at.

It’s not just stop signs that require a choice on the part of the driver in Italy. The red light, for example, may be of different shades and thus meanings. There’s rosso pieno: “Quel coglione ha preso il rosso pieno” – “that jerk ran a totally red light.” But, note the difference, there is also rosso pallido: “Beh, non c’era nessuno e non mi sono mica fermato, era rosso pallido” – “well, there was nobody around and I didn’t bother to stop, it was only lightish red.” Why is this? 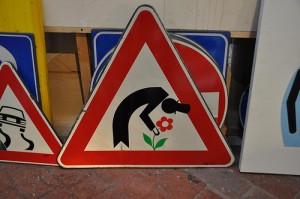 Some of Clet’s signs in his studio

Last year in Florence, we started seeing silhouette figures of a man appear on no-entry and other signs. The work of French-born street artist Clet, these figures alter the meaning of street signs without diminishing their readability. Clet said to me in an interview that street signs are fair game because they are part of urban blight, offensive human interjections in the landscape. He pointed out that there are way too many signs in Italy and that they are patronizing: “The omnipresence of street signs, other than being a sign of the [Italian] culture of “anti-responsibility”, can verge on the absurd.”

And so, being a lover of the absurd myself, I started looking out for massive groupings of signs. And it’s true. There are some intersections at which you could not possibly read all the signs even driving past at 8 km/h, like this one on the Grosseto-Siena superstrada. 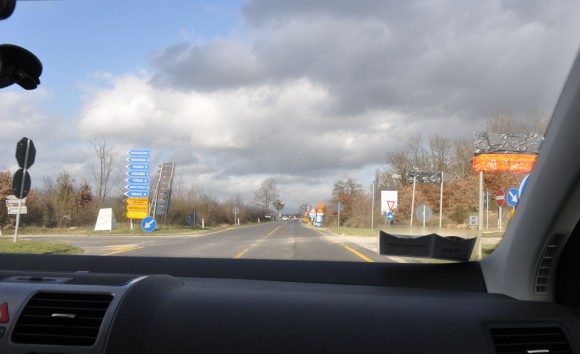 Technically, you should know the meaning of all these signs in order to get your drivers’ license in Italy. After rather too many years of driving illegally on my Canadian license (after declaring residence, you’re allowed only one year with an international drivers’ permit), I decided to suck it in and get an Italian license. As there is no reciprocal agreement between North American and Italian licenses, I had to to through the whole rigamarole of applying for a learners’ permit, attending driving school, passing a grueling theoretical test and finally a humiliating driving exam.

The driving schools have a monopoly on every part of this process because one trip to the DMV to get a learners’ permit without an intermediary reduced even my Italian husband to near tears. For three months, I spent Tuesday nights from 6-8pm in the company of zit-plagued teenagers with first time-driving-angst. I beamed with pride when complimented by the teacher for my excellent driving skills – I had only a few hundred thousand kilometers of experience in heavy snow conditions, after all… And I learned the right multiple-choice answers to the correct meaning of some of the most intriguing signs.

It’s really hard to memorize all the signs, speeds, and rules of the road in this country. I swear that the Canadian drivers’ test was Mikey-Mouse in comparison. I actually think I came out a better driver. I know the proper speeds for each type of road, what to do if someone has glass stuck in their eye, and if I’m allowed to pass an Ape on a country road when the line is solid (yes, if I can stay on my side of that line). It is probable that a recent driving school graduate knows more than your average Italian driver or even police officer. In an episode of the comic show “le Iene” last year, they demonstrated that Roman vigili urbani did not even know the basic rules of the codice della strada!

Did you know that there are three different signs for “bump” in Italy? Yup. There’s the sign for speed bump or similar raised lump in the road, the very similar sign for bumpy road, and yet another for a depression in the road. Knowing this will have little to no consequence in real life, other than to the underside of your car, but it could mean the difference between a pass and a fail on that dreaded theoretical test.

There are other signs that, if you have to think about their meaning, it’s already too late. This is the case with the sign titled “Sbocco su molo o su argine” that warns you that the road ends, without barrier, in water. You ought to memorize this sign should be consider driving anywhere near Italy’s coasts.

Other signs seem to be just jokes for the driving test’s multiple choice section in which you are given three statements about a sign and you have to say if they are true or false. Some answers that seem really absurd are actually the correct one. Take the example of the sign indicating the presence, nearby, of domestic animals. Of the three proposed statements, you must mark “vero” – true – the statement “slow down or stop if the animals danno segno di spavento” – appear to be scared. I ask you: how can I tell if the cow is scared, or surprised, or just happy to see me?

In the end, amusing signs are a universal phenomenon, although in Italy we do have a good share of them. Fittingly, I shall end with the sign for via libera – which essentially means “anything we’ve said until now, forget about it.”

This post is the second in the Italy blogging roundtable series (if you missed it last month, the topic was “why I write about Italy“. Here are the other knights of the roundtables’ contributions to the topic of “driving in Italy”: