11 green vegetables I never ate before moving to Italy

Growing up in Toronto, Canada, we had a pretty good variety of vegetables available to us thanks to the city’s cosmopolitan character, but lately I’ve been “meeting” a lot of vegetables here in Italy that are new to me. I’m opening up to trying and experimenting with these as they come into season, some with more success than others. None of these are particularly rare vegetables, but they’re new to me, and I thought knowing their Italian names and what to do with them might be helpful for my fellow food adventurers.

This post is part of the Italy Blogging Roundtable, and for the month of April we’re inspired by Spring to talk about “Green”, which I have chosen to interpret very literally! Take a look at the rest of the group’s posts listed below. 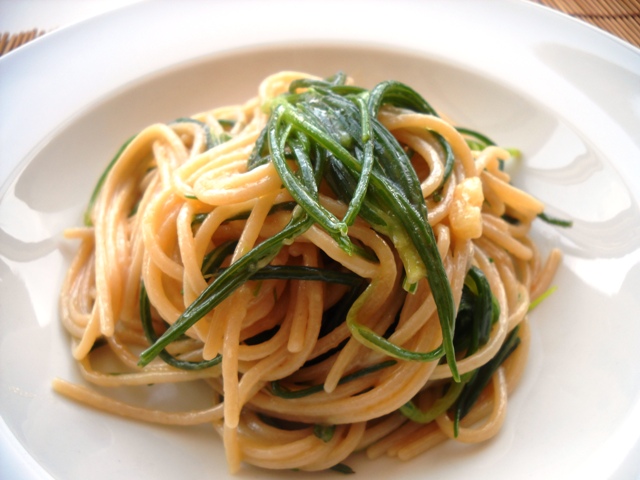 This vegetable is mainly interesting because it looks like hair! In fact a nickname for it in Italian is barba di frate or friar’s beard. In English it’s the much less evocative Salsola soda, more commonly known in English as “opposite-leaved saltwort.” The succulent will grow in salt water, though can also be grown without. The wild kind is thick leaved, while the cultivated kind we eat has thick long leaves that are a bit chewy until properly boiled or cooked in a pan. Agretti are shoulder-season plants, so best to eat in fall and spring. Italians most often make it sautéed with oil and garlic, or a bit of lemon. You can also combine it with long pasta – I recommend this simple article on vegan blog (in Italian) for spaghetti and agretti, illustrated in the photo. 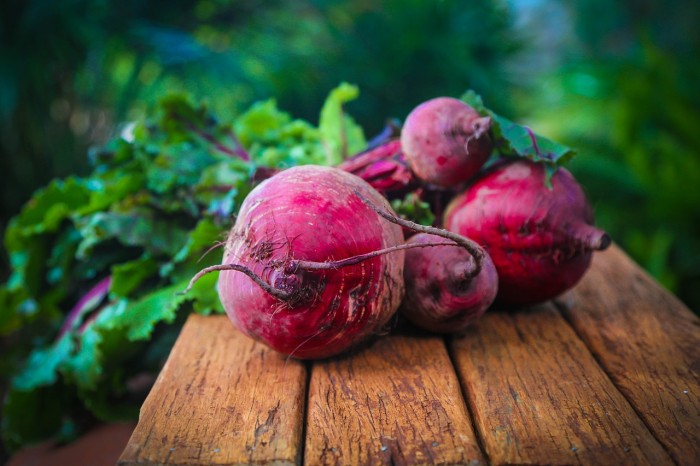 To call the beet a green vegetable is a stretch, but hey, it’s got green leaves! I never really know what to do with this vegetable – I’m not a fan of the boiled and packaged beet root that you can buy in the supermarket, plus I tend to be afraid of cooking with and eating anything that will stain everything within a half kilometer radius. However, recently I tasted an amazing salad with extremely finely grated fresh, raw beet root (at Irene Firenze, made by Chef Fulvio Pierangelini) and this has opened up a new horizon for me!

The carduus grows wild in Italy and is notable due to its spiny and impressive purple flower. Historically, the dried flower was used in the wool milling process for a part called “carding” where the tough flower was used in a press against which raw wool was rubbed to separate the wool from external elements. The young leaves of the plant can be cultivated for human consumption and have a flavour close to that of the artichoke, to which it is biologically close. You find cardi most often chopped up and mixed with ricotta for an absolutely delicious ravioli filling. It’s not something you regularly find in the supermarket, at least not here in Tuscany. The flower though is seen all around the countryside. 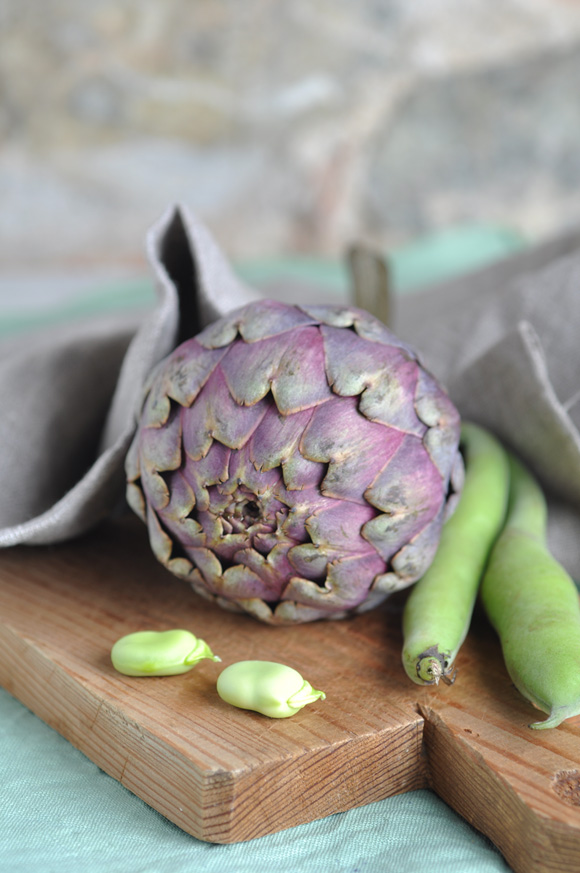 Artichokes are hardly an exotic vegetable, but in North America there are not many varieties available. My mom used to make them on occasion boiled whole, and then we’d eat the tiniest bit of flesh off the base of the leaves. She didn’t like the heart, which is the part most people eat! If you’ve only ever had tinned artichoke hearts, you can understand why mom didn’t like them. I’ve always been attracted to the artichokes at the supermarket, but I have no idea what to do with them. Reading online, one gets the impression that there are a lot of recipes with them but that they are a bit of a pain in the butt to clean. Nonetheless, this year I took the plunge and followed a recipe that involved breading and frying them. I figure you can’t go wrong with frying. Hubby was in seventh heaven as I have never fried anything in my life. So: each area of Italy has a different kind of artichoke available to it in March and April and I highly recommend experimenting. When choosing, feel the head and aim for the firmest ones; if they give too much, they’re going to be gummy. If you’re wondering what to make with them, other than frying them, risotto is a good idea – here’s a nice recipe by Amy of The Bittersweet Gourmet. 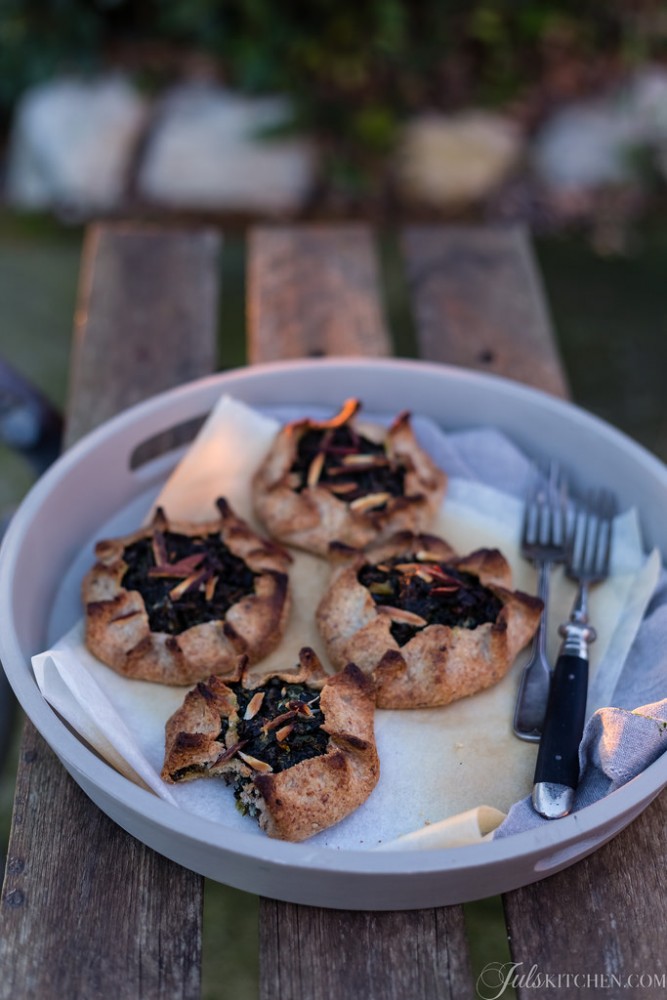 The Tuscan green par excellence, cavolo nero is the only thing that grows here in the deep of winter (that and other kinds of cabbage). Despite being called “cavolo” or cabbage, it’s not round, and not from the cabbage family although it’s considered close to wild cabbage, apparently. In English it’s translated as kale, but it is not the same as that trendy vegetable everyone’s buying at Whole Foods these days. The curly leafed variety common to Tuscany is the most important ingredient in tuscan ribollita, a hearty winter soup. But a while back I saw this amazing recipe by Giulia of Juls Kitchen that for black kale tarts – I’ve borrowed her photo which links to the recipe, follow it here. 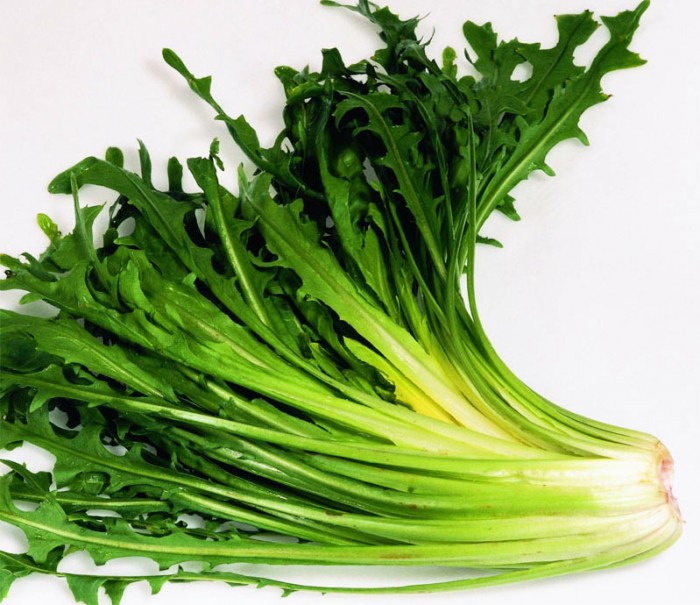 The dandylion-like leaves of this wild plant are my newest fave food. The leaves are a low-fibre green, appreciated for its purificatory and digestive abilities. It’s slightly bitter, thus best boiled just slightly, though it can also be wilted in a pan with oil and salt. When boiled you can use a bit more of the white stem. 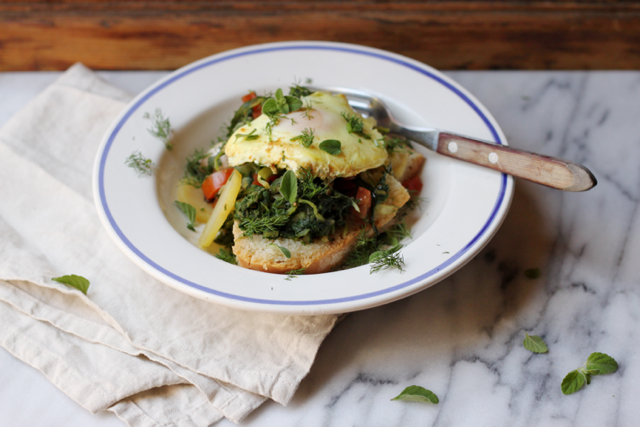 People who really know what they’re doing go foraging for wild greens, or “erbe di campo.” As much as the concept attracts me, my capacity to recognize non-poisonous food in the wild is about on par with my black-thumb growing ability. Sometimes these things show up at a local market, and even my Esselunga has a mixed bag of them in season. Emiko Davies cooked up a stash of them to make acquacotta, a traditional dish of cucina povera in my beloved Maremma.

While there is nothing particularly exotic about fennel, it’s something I’ve only recently warmed to. I used to have a friend in university who had no cooking ability and I tried constantly to get him to buy food at the supermarket, including vegetables. His big question for anything I would propose was “how long will it keep in the fridge?”. He would have liked finocchio, because hey, I’m sure they’re great when they’re just picked from the garden, but a 2-week-old finocchio in the fridge is just fine, either boiled or eaten raw. I like to cut it into quarters and just chomp down on it with some wedges of pecorino cheese. My mother in law does a simple finocchio au gratin – boil the vegetable, then put it in a pyrex container with oil and a bit of breadcrumbs and bake in the oven (or toaster oven). I also enjoy it sliced thinly and combined with oranges for a salad. 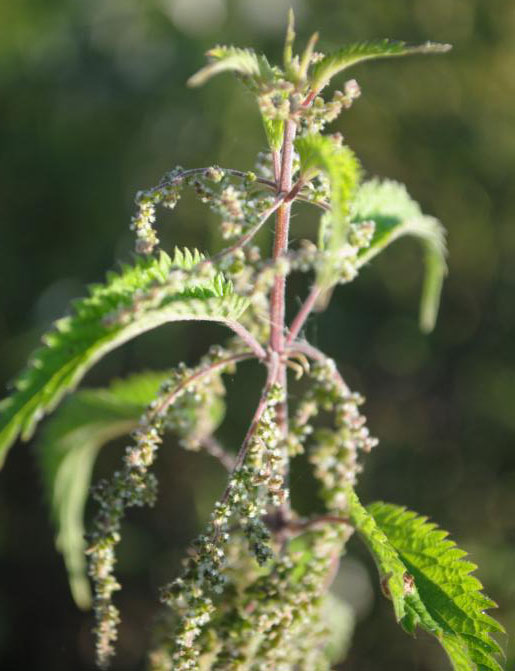 Stinging Nettles! It sounds prickly and almost poisonous. This is not something you easily find in the supermarket, even here in Florence, but rather something people grow in their vegetable gardens, so you might find it at a farmer’s market. A very tasty green, I’ve only ever had it either mixed with ricotta inside pasta, or as the green part of green pasta. Emiko Davies writes a nice post about this on her blog, with a recipe for nettle pasta.

Also known as cicoria di catalogna, this vegetable is typical of Lazio. Available in early spring, the outer leaves look just like the chicoria listed above, but it has an inner heart with these almost alien looking parts that you break off and are supposed to eat raw. They are crunchy and excellent as “pinzimonio” with some good olive oil and salt.

This is actually a kind of head of lettuce, translated as escarole or scarole. As it’s quite bitter and tough, Italians tend to like this salad cooked! In my husband’s family they make a “pizza salata” with puff pastry dough top and bottom, and inside, about a kilo of chopped, cooked scarola, mixed usually with olives or capers, and anchovies. 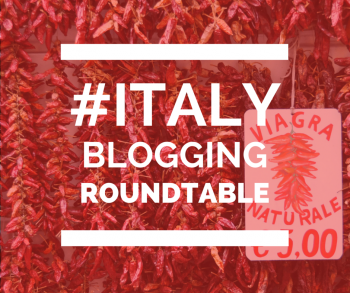 Italy blogging roundtable is back!

This is part of a monthly blogging series shared by a group of female bloggers called the Italy Blogging Roundtable. April’s theme is GREEN and I encourage you to read how others in the group have interpreted it!