I don’t know about you, but I’m a sucker for a good wedding. When we were in our late 20s/ early 30s and everyone was complaining about having one wedding per weekend, I was secretly perfectly happy (especially if I could recycle the dress I was wearing amongst different friend groups). I kept every single invitation in my photo album, along with a few pictures of the bride (the groom occasionally, but always the bride). 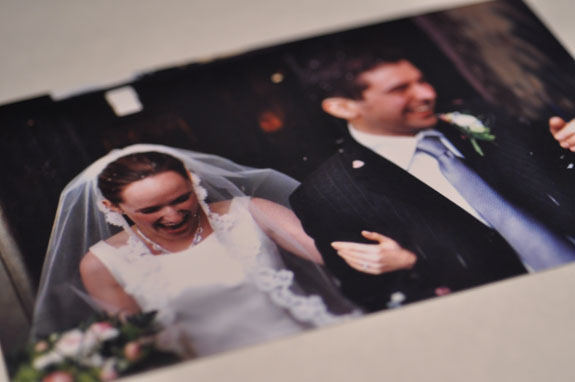 This month’s Italy Blogging Roundtable topic is invitations, so I took out my collection for you. So get out your kleenex and put on a fancy dress (i think 75% of my readers are women, though men, feel free to put on a dress too) cuz you’re about to be invited to an Italian wedding.

The first part of any wedding, from the point of view of the guest, is receiving the invitation. And any bride or wedding planner will tell you that this sets the tone for the whole event. American brides tremor over colours and graphics that they’ll have to carry through every element to follow. In Italy, invitations are generally simple and traditional, printed on good quality paper, but lacking graphics or colours, allowing brides not to worry about these elements until the last minute.

A typical Italian wedding invitation is a single sheet of good cotton paper, often cream coloured. Text is printed in cursive in brown or blue, oriented either horizontally or vertically and announces the bride and groom’s intention and date. This part is called the partecipazione, and may be sent to any number of people who might attend the church or civil ceremony, or who just should be informed of the marriage. Sometimes a simpler version of this card is printed and sent after the wedding to distant relatives, ex-colleagues and the like.

The announcement card is accompanied by a small card that is given to those invited to the lunch or dinner, which generally is a smaller number of people.

Below is a very nice example of this traditional format, the wedding between my brother in law Gianluca and my now-sister-in-law Laura. As she was the most beautiful bride I’d ever seen, I also want to show you a photo of her arriving at Palazzo Vecchio for their civil wedding in Florence. 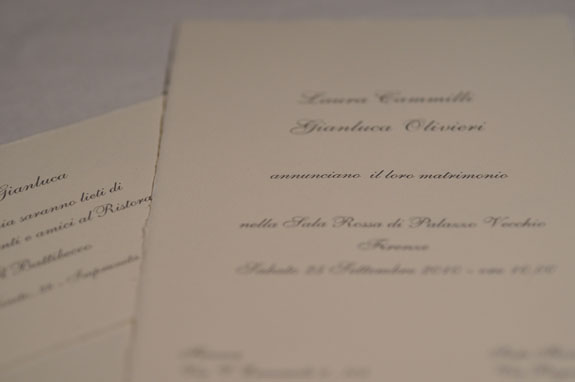 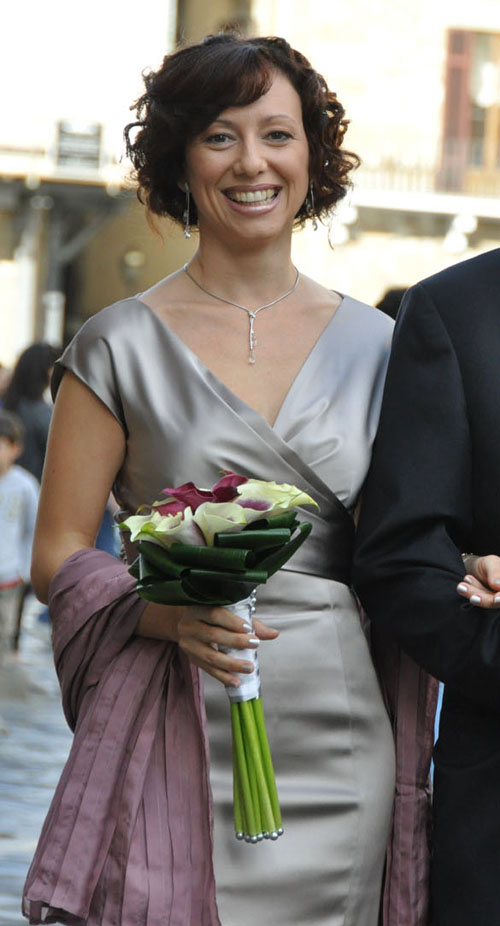 I have a large number of similar types of invitations in my collection, with slight variations. Paolo and Sara’s civil wedding in Greve had green text on the invitation. Claudio and Paola’s church wedding in Florence, just two weeks before ours, also had a traditional invitation, and a very lovely party too. 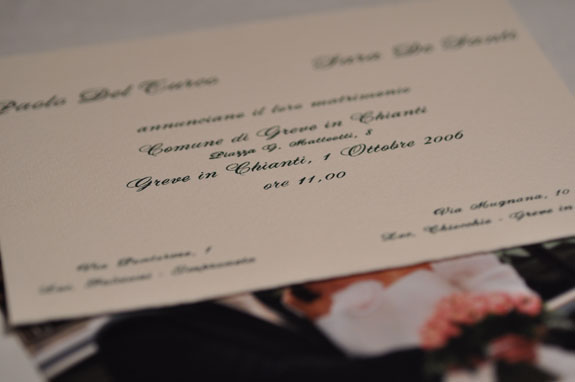 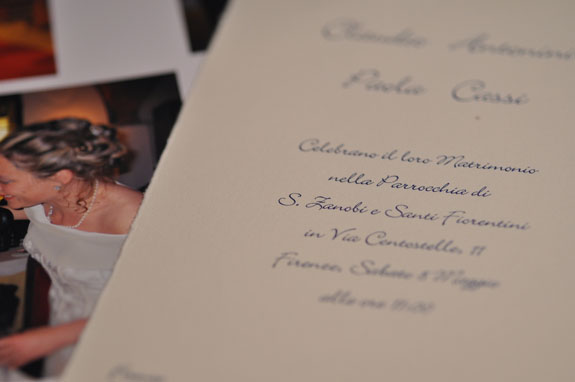 Perhaps our least traditional friends also had one of the least traditional invitations, as far as Italian weddings go. We met Flavia and Alessandro at our church’s pre-nuptial classes and they became good friends once we noticed their intelligent and ironic take on the whole thing. Their invitation, on pearlized paper, more closely approximates some of the offerings abroad, and it came in a gorgeous pearly blue envelope that I think I used for a craft project some time ago. At their wedding they had amazing decorations made from recycled bottles and dried orange slices with cinnamon stick. I saved one and use it on my Christmas tree. 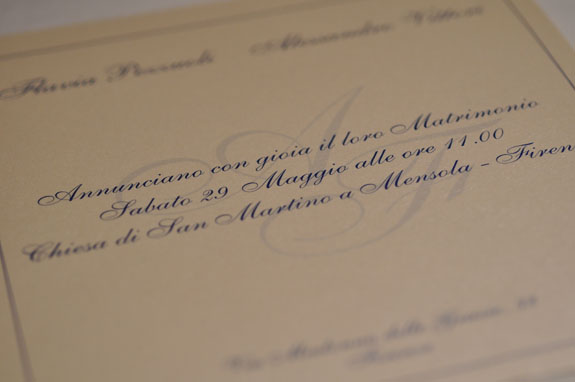 When Tommaso and I were married in May, 2004, I’d already been to a few weddings, and in the 2 years to follow, we attended a lot more. Friends and family who came from Canada and the States to attend still talk about our wedding, though for Florentine standards it was pretty normal. 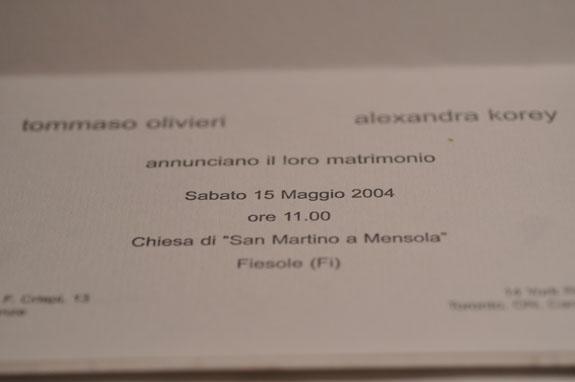 Tommaso and I’s invitation – inside, Italian

Perhaps the least normal thing about our wedding was the invitation, because we had to make it bilingual Italian-English, and because I still hung on to an American idea of elaborate invitations. My solution was to print an insert on semi-opaque tracing paper that went inside the Italian invite. As I had multiple inserts, I chose a folded style invite, but stuck to a traditional text and layout. This consisted of a very pretty handmade paper with yellow flowers, folded, with the printed page folded inside. For the English speaking guests I put in the translation, plus those invited to the lunch after the ceremony received a small card. I opted for Arial font and no caps on our names, and had the invitation printed in grey. Call me transgressive. 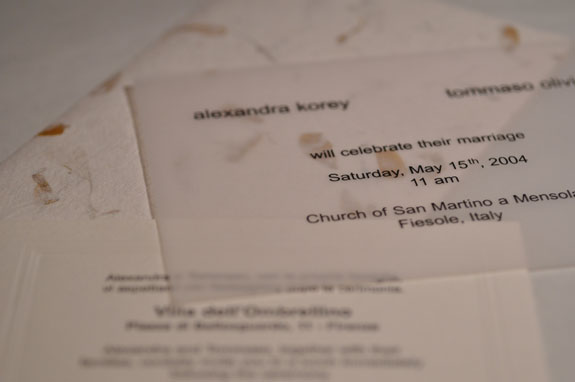 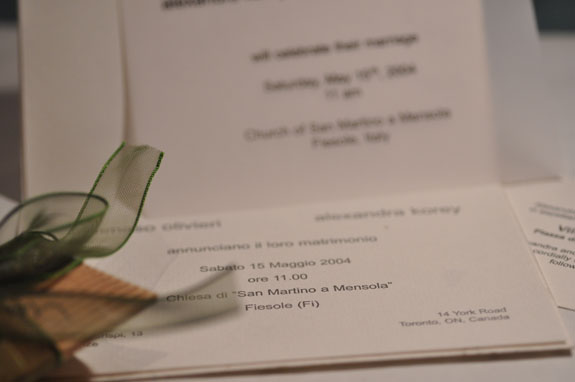 Inside of bilingual invitation

One thing that is very different about Italian invitations, compared to the Anglo-Saxon tradition, is the lack of a reply card or strict RSVP method. I made reply cards for my North-American guests, but here in Italy I was dissuaded from doing this. I wrote RSVP on the lunch invitation, but we were instructed not to put a phone number on it (and god forbid an email address). The idea is that if they’re close enough to be invited to your wedding, they ought to know your phone number, and be in contact with someone close to you in order to let you know if they’re attending. This resulted in not having a solid head count – people phoned my mother in law (and she didn’t keep track), or didn’t RSVP at all (since they didn’t seem to know what those four letters meant). A few people who did confirm simply did not show up the day of, costing me a lot of extra money. I was too happy at the time to be as pissed as I ought to have been. 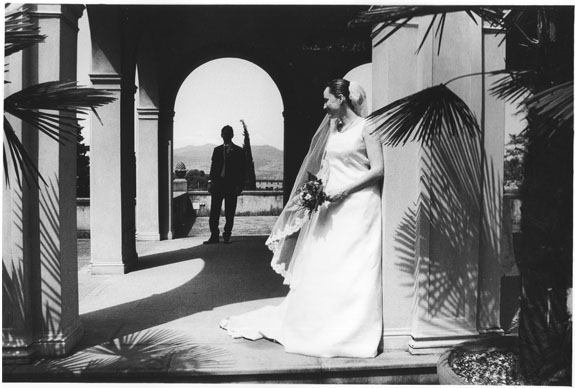 The happy bride and groom

I was a highly organized bride (you didn’t have any doubts about this, right?) and I also stored copies of every item related to the wedding in a box after the fact, so I am happy to share with you a bomboniere and the menu. The bomboniere is a little container of candied almonds with a slip of paper to remember the date. These are usually attached to a small gift like a little plate or other dust-catching do-dad. As I refused, we gave food to a local charity and attached a scroll about this donation to the pretty baggie. Many people keep these in silver bowls around the house; I eat the almonds and turn the baggies into lavender sachets in my closet. That’s as Martha Stewart as I get.

Actually I was rather Martha Stewarty at the time because I made 100 of these sachets with bows (enrolling multiple girlfriends for help), and also prepared 200 boxed versions as it is tradition to give them out also at the office! 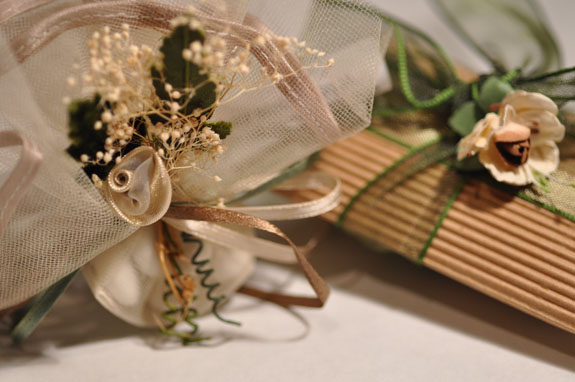 One of the fondest memories that we and our 100 guests have of our wedding is of the food. The caterer was Donay, at Villa dell’Ombrellino. I attempted to create a vegetarian menu, and succeeded through the aperitivo and primi, and I am a rare bride who actually ate and enjoyed the food at her wedding. I will never forget the risotto with fiori di zucca, which is still my favourite dish. But it was made clear that at a certain point, people expect… Meat. And so a vitella (veal) was added to the menu (rather to my chagrin, baby calf, poor thing). But the shocker was how it was presented: it was paraded out, flaming, by two waiters. Everyone stood up and clapped for the flaming veal.

If I could do it all again I’d do it the same way, including the veal and all the preparations. And I’d still marry the same guy, too.

Let’s see what my fellow knights have come up with on the topic of Invitations:

But wait there’s more!! An INVITATION to you, other Italy Blogger!

As we’re preparing for our one-year anniversary of the formation of the Italy Roundtable next May (hard to believe a whole year has gone by!), we’d like you to pull up a chair (so to speak)! We invite you to choose one of the topics we’ve blogged about in the past year and write a post about it. Please link back to all five of our blogs, explaining the roundtable. We’ll highlight some of our favorites in our own Roundtable posts next month.

Here’s a list of the topics we’ve covered so far – and remember, you can be as creative with your interpretation of it as you like… we sure are!

(Click here for a search result of all the roundtable posts on arttrav.)

Send one of us a link to your blog post or tag it with #ItalyRoundtable on Twitter so we can find it. Your deadline is May 1. Have fun and we look forward to reading your contributions!