A year ago I received an email from Jessica Spiegel of Why Go Italy in which she invited me to a project that would unite a few Italy bloggers. I was very honoured to be included in her shortlist of people she considered good enough for the task. We ended up being a group of five women: 2 resident in Tuscany (Gloria and I), one in Umbria (Rebecca), one in the States (Melanie), and Jessica herself who lives in the States but travels frequently to Italy (I think). And the Italy Blogging Roundtable was born. We still haven’t actually met around a round table, but there are people out there who are convinced that we actually have monthly meetings, and sometimes it feels like we do!

Each month, starting in May 2011, we have chosen a general topic that could be applied to Italy travel, and written on this theme. After some specific things like “my favourite work of art in Italy”, when Rebecca was a little jealous of my specialty in this topic ;), we moved on to more general things like “elements” and “roots”. These topics are perhaps more challenging, and have produced the widest range of approaches. 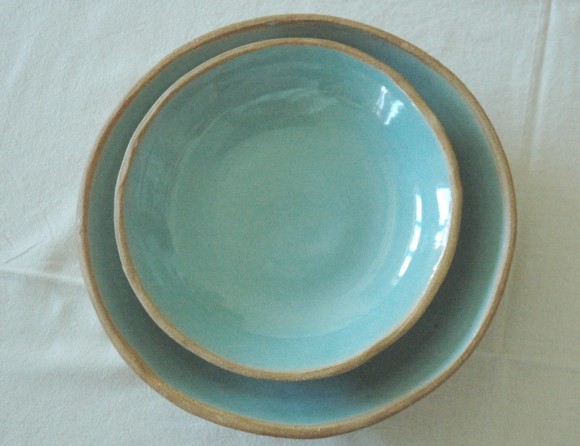 Diana’s post about The Elements features this beautiful bowl she made.

Now it’s our one-year anniversary and I’m amazed that we’re still at it. I am so fortunate to have found a great group of girls who are not only good writers, they’re 100% reliable. It’s amazing to see how we’ve respected deadlines all year – except when Gloria had a baby, she was about 3 days late with her post… I think we’ve all grown from the exchange, as we’ve challenged each other to write the best possible article about each topic.

For our anniversary we invited other bloggers to write on any of the topics we’ve covered in the past. Here are the gifts we got from them. Thank you!

May 2011: Our first topic was Why I Write About Italy and more than one invitee agreed that this was a good question. I like both the article by Linda on “Travel the Write Way” about being inspired by her Italian origins, and the funny one by Lisa Choido at Renovating Italy who writes out of passion. Cathy from An Italophile reminisces about her first visit to Pitigliano and her love for Italy.

Nobody chose to write about the topics from June through October, Driving in Italy, My Favorite work of Art in Italy, Back to School and Autumn! The latter two are clearly too seasonal…

November 2011: Our Comfort Food topic has been interpreted by Madonna del Piatto with a recipe for Gluten-free cake and also by A Welchie in Italy who goes for a traditional chicken soup.

December 2011: Last Christmas we blogged about Gifts and other bloggers participated in that one too, but Kate, whom I recently met, took up the topic again to tell us about how she received an easter egg from an impecably dressed eight-year-old on her blog Driving like a Maniac. I had kinda hoped she’d write about driving in Italy…

February 2012: Of all the people who should write about our theme Elements, I’m glad Diana Baur did, for her ceramics make beautiful use of earth and fire, and her writing is wonderfully poetic. Thanks for your post “Elements on A Certain Simplicity.” Diana’s post could also almost fall under January’s topic which was “crafts.”

March 2012’s topic was Roots and apparently nobody else wanted to take up that challenge.

April 2012: We received an invitation to go out for a walk. And last but not least, Melissa, self defined “studentessa matta” has taken up the final topic, Invitations, by inviting us into her beautiful garden. Apparently she does not have my black thumb nor shady courtyard garden .