I feel like my first “major” article of the year on this blog should be arts related, and know that I’ve been somewhat remiss both about posting, and in writing about the arts. The fact is that my daily life these days does not always involve exhibits or art history. But living in Florence, Italy, art is certainly all around me. And probably, art makes the news more often here (or in Italy in general) than in the rest of the world. Looking back at 2011, a fair number of interesting arts news items have come up. Some of it has more of a local impact, other things more international. Here’s what I recall – feel free to add your Florence art news in the comments. 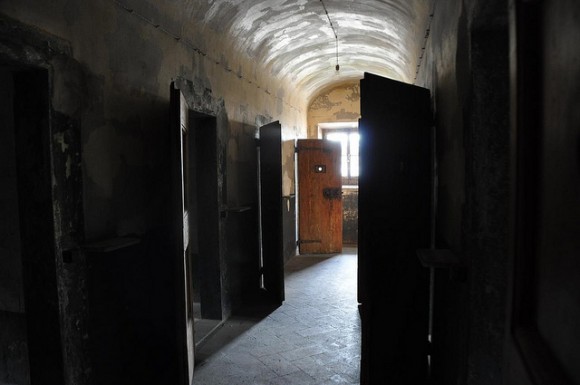 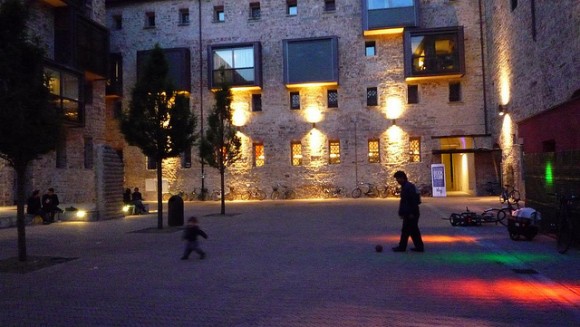 The former prison (sometimes known as “le Carceri”) has undergone a long period of restoration, and after a preview in January 2010, it opened fully and officially in April 2011. For the first three months, the superintendant of culture Giuliano da Empoli (who in December left this role, unfortunately) asked a handful of associations and media that have been close to him during the previous months to organize events. As I have been involved in le Murate from the start of Da Empoli’s position at Palazzo Vecchio, I was asked to participate with The Florentine to provide some English-language programming for this space. We had a debate called “culture clash” and 2 knit cafes, all of which were quite successful, I think.

Le Murate has been slowly taking off, rather than exploding, but it provides an interesting cultural hub at the edge of the city, along the viali, in a position that promises to become more important in the future. It takes time to populate a cultural center of this type, but the opening of a bookstore and gallery, and more recently the Literary Cafe’, are steps towards the revitalization of the space.

September to December 2011 – The Search for the lost Leonardo 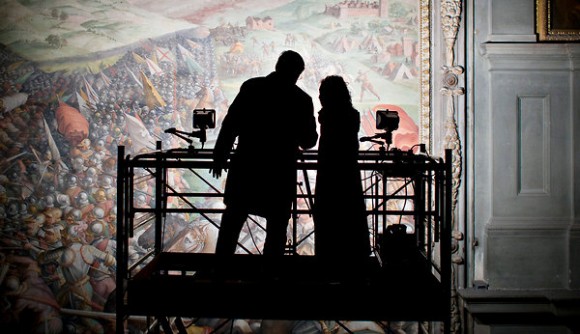 For many years, my old professor Rab Hatfield (Syracuse University in Florence) has been saying that he knows exactly where, in Palazzo Vecchio, Leonardo’s famed Battle of Cascina was begun – only to be covered up by Vasari. He has in fact published a book about this. I remember a particularly impassioned talk that he gave some of us in the Salone dei Cinquecento in which he explained that certainly Vasari valued Leonardo as an artist too much to just paint over his work, so he built a wall with some space in front of it. Another art historian, Dr. Seracini, has also been working on finding the lost Leonardo for many years. Both scholars have pointed out the words “Cerca Trova” (look and you shall find) on the fresco, thought to be a hint as to where to start digging.

This year, the National Geographic Society got involved in the search, thanks to the intervention of an American photographer named Dave Yoder, who figured that using a gamma ray camera (a technology first developed by someone else) could “image” the painting behind the 12cm thick wall. His kickstarter campaign for $265,000 failed. However, National Geographic made a hefty donation to fund the work, which is going ahead without the gamma camera as far as I understand. And most importantly, Matteo Renzi, mayor of Florence, strongly wanted the research to go ahead – and for a discovery to be made.

Scaffolding went up and work commenced on November 27, 2011. The exploration team used an endoscopic probe (kinda like what they use for a gastroscopy, only finer) which they poked through very small holes (4mm) made in the painting. The only thing they determined is that there is an air space between Vasari’s wall and something behind it. Meanwhile, the Carabinieri looked on after some claimed that the research is damaging Vasari’s fresco, and an interesting polemic (it wouldn’t be italy without polemics) began. 400 signatures sit on a petition against the search behind Vasari for Leonardo, names of art historians for whom I have profound respect: Keith Christiansen, Luke Syson, Salvatore Settis, and also the vocal Tomaso Montanari and the polemical critic Francesco Bonami.

Where is all this going? I have no further updates beyond December 9th and believe that this part of the search is over. It may be stopped forever due to protests. The question remains: what would they do if they were to find Leonardo under there, anyway? Bonami says that an obsession with nostalgia and our (italians’) past keeps us from looking and moving ahead. I have to agree: Florence needs a future right now, maybe even more than more past. (On the topic of 2012 being the year Florentines find their future, read my husband’s reflections here). 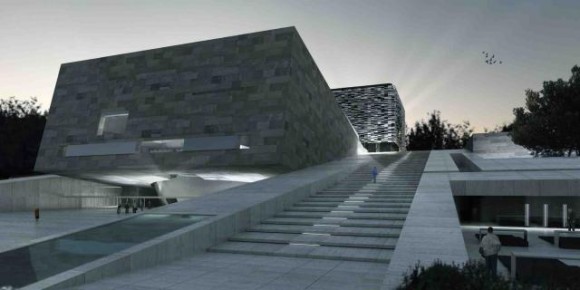 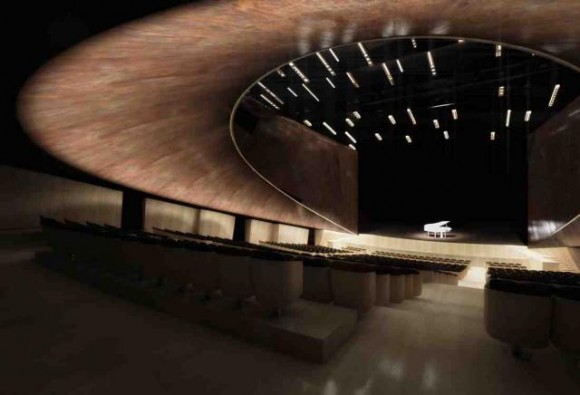 The Nuovo Teatro dell’Opera di Firenze opened for a short preview at the end of December with a line up of excellent concerts to ring in the new year (unfortunately I am too cheap to have attended any of them). An attractive building designed by Paolo Desideri of Abdr Architetti Associati, it will house three concert halls when finished, including one outside ampitheatre.

2 years and 160 million euros to get to this point and it seems like a miracle, knowing how long major projects usually take around here. Unfortunately only the first phase of the works has been inaugurated, and after this “preview,” more construction is expected. The structure is expected to really open towards the end of 2012. I hope they pull it off. The Maggio Musicale, whose new home this is, says that we will see a 40% increase in programming, including laboratories aimed at children and families – which would certainly help secure the future of classical music. 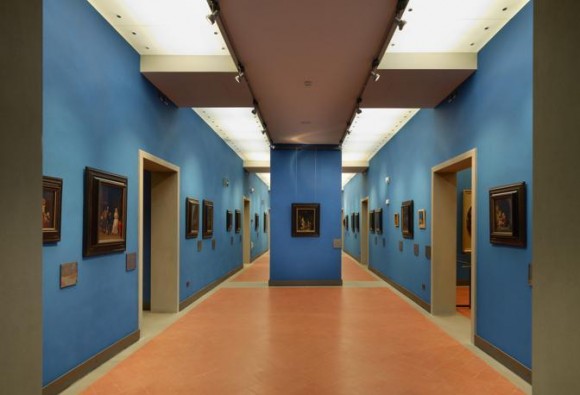 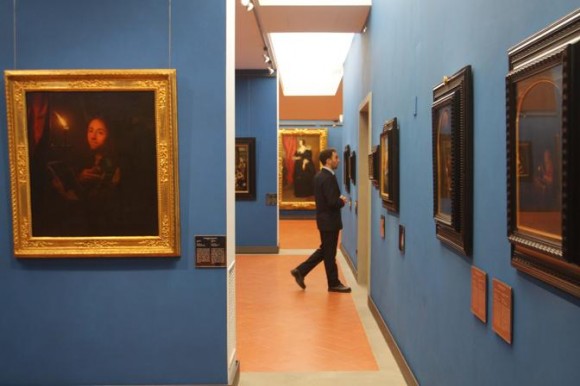 Eight new rooms to hold a few hundred old paintings – the first lot of the Nuovi Uffizi restoration project that has been going on, and polemical, for as long as I can remember is complete.

Much has been made of the “sale blu“, billed as a heroic step towards a different museum display. True, the Uffizi has always had (boring) white walls and pietra serena accents in the Vasarian vision of this space. But the blue rooms are nothing new, museologically. I admit, I have not seen them yet, but having seen photos, I am immediately reminded of the Bardini museum, whose blue walls inspired Isabel Stewart Gardner. Bardini Blue was thus popular in the 19th century. Why is it, then, that in the Uffizi’s initial proposal for blue walls in 2008 – when Natalini suggested applying them to the Botticelli room (it could use some sprucing up!) – the sh*t hit the fan? This proposal was shifted to the French, Spanish, and Dutch works about which the public is apparently less sensitive.

So that’s 2011 art news in Florence as I saw it. A bit heavy towards December, which may be fresh in my mind, or may represent a push on the part of administration to get things done by the end of the year! Let’s hope 2012 brings even more activity and fewer polemicized debates. Happy New year, folks.