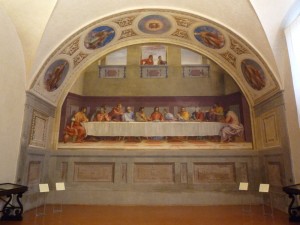 I have been tagged in the “My 3 best kept travel secrets game” that Katie from Tripbase started. Not only am I thrilled to have been chosen to contribute secrets, I’m happy that this has led me to read some more great travel blogs, including eXplorer written by Simon Falvo (@1step2theleft on twitter) who tagged me!

I have taken ages to think of what to share. Arttrav writes about art, so I figure it should be art secrets, and I know Florence best… But are there really secrets left to share about Florence? Maybe not too many, but there are still a few things off the beaten track, and best of all, my three chosen secrets are also free things to do in Florence!

It’s free to enter this silent, deserted museum in a residential area of Florence, just beyond the hustle and bustle of the ring roads. Inside you’ll have the opportunity to sit still and quietly confront a major masterpiece of Mannerist painting: Andrea del Sarto’s Last Supper. This fresco is in the refectory of the ex-convent which has recently been restored. The adjacent museum displays lesser – but still important – works by artists who were Andrea del Sarto’s contemporaries. Complete your visit with this San Salvi itinerary with map. 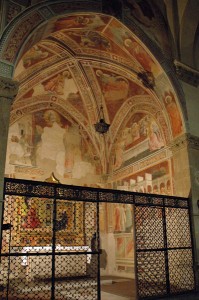 The church of Santa Trinità is already somewhat unknown to tourists, and I highly recommend that you go there. But inside there is a pretty famous chapel that belonged to the Tornabuoni family; it’s painted by Ghirlandaio in the late 15th century and it’s in great condition. So go see that… but then take the time to also see the Bartolini-Salimbeni chapel, at which nobody bothers to look. Why?

This chapel was frescoed by Lorenzo Monaco around 1423 (stories of the Life of the Virgin) and on the altar is an absolutely beautiful Annunciation, the kind that takes your breath away. The curly-cue robes, the gold, the patterning, the people that are bigger than the buildings that contain them… these are all hallmarks of the International Gothic style in art. This chapel is a holdout for this style at the very same moment (ok, a year before) that Masaccio is busy painting the Brancacci chapel across town in an entirely new style: Renaissance. Take a look around the rest of the chapels; they all have important Quattrocento altarpieces.

(I apologize for the photo – it’s not so easy to photograph due to the light, but wikimedia commons has a few decent details).

This is not just one place, but rather something to look out for. There is a popular Italian tradition of placing Madonnas on street corners or on the sides of buildings. Almost each block had one (there are about 1200 on 3000 streets surveyed in Florence); she looked out for its residents. While tabernacles are found in the whole country, Florence’s great devotion to the Virgin Mary makes it particularly rich in this medium. The tradition began in the 13th century though most of the ones you will see come from the 15th or 16th centuries. Some look a little earlier but are only so because they are often a bit stylistically retrograde due to their iconic function.

One of the most impressive tabernacles of Florence is the huge polychrome maiolica fountain (named “le Fonticine“) on Via Nazionale by the Della Robbia family (1522). It looks a whole lot better in person than in the photo as it has recently been cleaned. Below the colourful Madonna and saints, a row of putti spit out water. The Madonna inside Orsanmichele was initially an outdoor tabernacle resident, but as she worked miracles, she got an upgrade. Most street corners host smaller and less artistically significant icons, ravaged by elements and time. Had they been preserved inside museums they might look quite different now. This is a reminder of the everyday function of religious art in Italy; the condition of these works is a natural part of the process.

My grandfather-in-law gave me an old book that he bought in weekly issues: I tabernacoli di Firenze (part of the Strade di Firenze series – see cover scan below). I see this book occasionally in bookstores in the later bound version that was issued in the 80s; if you’re interested in tabernacles this is the most comprehensive guide ever. 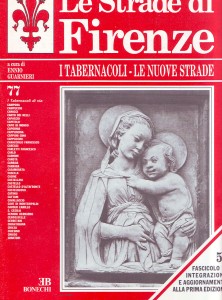 Now it’s my turn to tag up to 5 bloggers who have not yet been tagged in this game. They are not all travel bloggers per se, but I know they have secrets to share: