5 works of art in Florence that are better in person

Why do over one million people flock to Florence, Italy and line up to see Michelangelo’s David each year? And how come over five million dutifully enter the Uffizi Gallery, knowing if they’re in Florence they’d better visit the paintings by Botticelli and Leonardo in person? While art may not be the number one driver behind everyone’s travel choices, it’s a strong one especially for visitors to Italy, where a long history of the visual is wrapped up in every aspect of the country’s lifestyle.

In Florence, every perfect plate of pasta, every handcrafted leather shoe, every cobblestoned street is part of an artistic timeline that can be traced back to the Middle Ages, through the Italian Renaissance that started here. Witnessing that Renaissance art in the context of the city and culture that gave it light can be a life-changing experience. Indeed, many have found it overwhelming: Stendhal Syndrome, a medical condition that involves shortness of breath and feeling faint after overexposure to art, began right here in Florence.

Until recently, I’ve taken for granted that art and travel simply “go together,” without questioning why we subject ourselves to the discomforts of air travel, hot cities and at times long lines just for the honour of witnessing a work of art in person. But recently, I’ve been reflecting more on the matter. Expedia asked me to write an article for them for those who choose to travel for culture, and this reminded me of my recent post about “the authenticity of seeing art in person” in which I question why some works are just better in person.

Since then, I’ve thought about which works in Florence fit the bill, polled my friends on the matter, and also asked a few people who might be able to explain why it is the case. So, here are five works of Renaissance art in Florence that are most likely to cause Stendhal Syndrome. Experience them at your own risk. 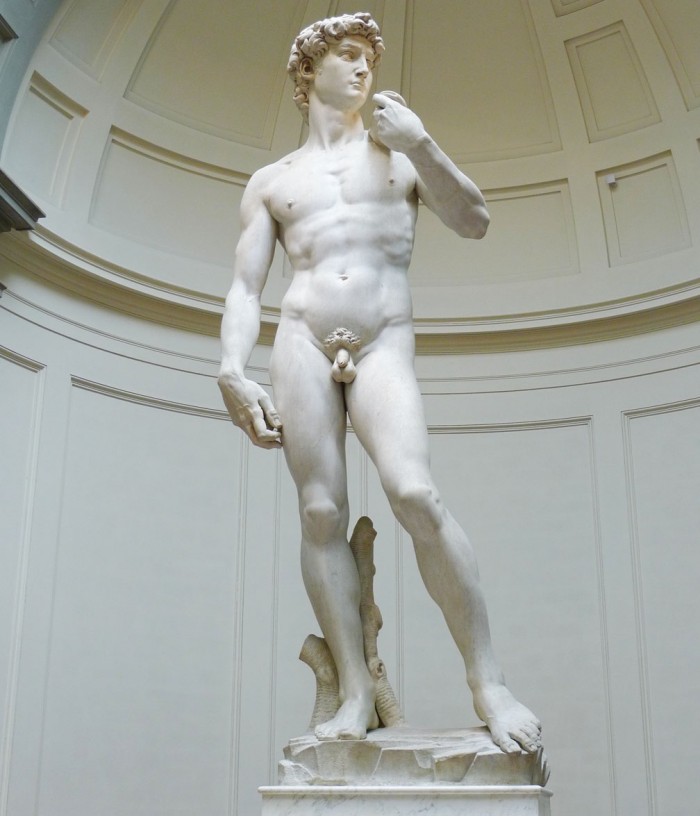 “Michelangelo-David JB01” by Jörg Bittner Unna – Own work. Licensed under CC BY 3.0 via Wikimedia Commons

Topping any list of works of art to see in Florence, the David is perhaps one of the most powerful. It may be the best known sculpture in the world, and we’re so used to seeing him reproduced on mugs, aprons and underwear that it comes as a shock when you stand in front of him and realize that he’s just that much better in person. A tour-guide friend who often brings groups to the Accademia Gallery told me that even grown men are frequently reduced to tears in front of this statue.

Sculpted by Michelangelo from a huge block of Carrara marble that had been started by another artist, the over life-size religious figure was originally intended to be placed high up on the Cathedral of Florence, but when it was finished in 1504, it was immediately deemed too beautiful and given a spot in front of Palazzo Vecchio, the city’s seat of government. A copy now stands in its place, as the original was moved indoors in the 19th century for preservation. 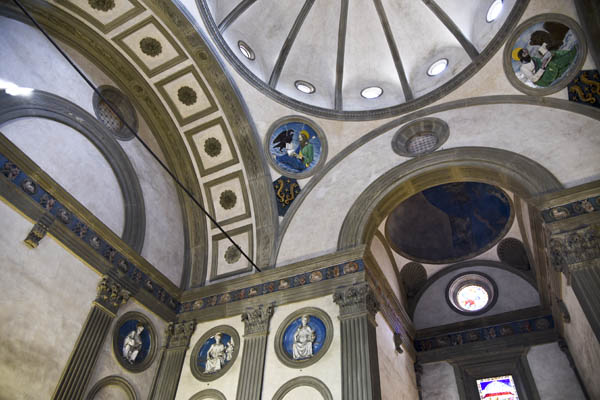 Brunelleschi may be best known for putting the dome on Florence’s Duomo, but he’s also responsible for a number of churches and chapels around the city. One of his late works is the Pazzi Chapel, which is the 15th-century chapter house (a kind of friars’ meeting room) of the late 13th-century Franciscan complex of Santa Croce. The Church of Santa Croce, which houses the tombs of many Tuscan greats as well as fresco series’ by Giotto, is where Stendhal first experienced his art-induced illness.

The Pazzi Chapel has always been a special space for me (find out why here), ever since encountering it as a study abroad student. I was recently involved in a crowdfunding campaign to restore part of this building, and thus had the privilege of accessing it almost daily for two months. I have witnessed choirs and opera singers spontaneously break out in song here. I have been inside alone, in the dark. I have lain on the floor under the dome. I have experienced the inexplicable way that this building speaks to us on a human level through its perfect, architectural proportions.

The Pazzi Chapel doesn’t render well in photos: it’s almost impossible to photograph the rectangular, domed chapel with the most essential of decoration. But go inside, sit on its benches or stand in the middle and let the space in to you and you’ll understand the power of architecture and how it speaks to us. 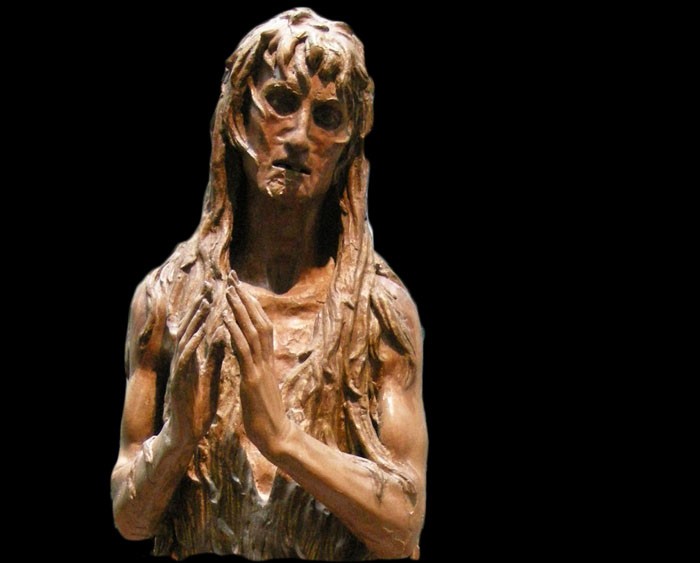 Donatello, Mary Magdalen. Detail of photo by Sailko Licensed under CC BY 2.5 via Wikimedia Commons

Donatello is one of the sculptors who kickstarted the Renaissance. His youthful works in stone, often representing life-sized men, are full of power, gravity and personality. The artist had a very long life, during which he demonstrated flexibility in style based on factors like what medium he was working in or the destination of the commission. In his late years, in the same way as Michelangelo would after him, his consideration of his own mortality influenced the creation of works of art with particular pathos.

His Mary Magdalen, made for the Baptistery and part of the collection of the Museo dell’Opera del Duomo, is one such work. Carved in wood, the aged, penitent female Saint is smaller than life size, seemingly shrunken by the weight of the world. Stand closely in front of her and she transmits her despair to you. Justin Waldman, a frequent visitor to Florence, commented to me: “Standing face to face with Donatello’s Magdalen brings home the enormous humanitas of the work far more than any photograph does. I never leave her without tears in my eyes.” 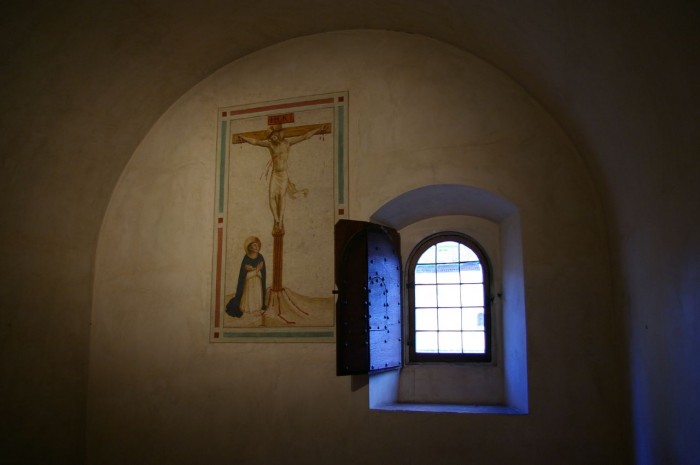 The monastic complex of San Marco was built and decorated in the 15th century under Medici patronage. The fresco paintings, in the simplest of styles, were executed by Fra Angelico for members of his own Dominican order, and were intended to help the friars focus on meditation. There is something very special about visiting this quiet, historical space (best done on winter mornings, without the crowds), when you can meditatively wander down the corridor that gives access to the friars’ tiny cells and imagine what it must have been like for them to live with and within this work of art.

“Works that are ambulatory – like San Marco – cannot be understood without physical presence,” says fellow University of Chicago graduate Dr. Allie Terry-Fritsch, a specialist on the way the physical body is part of spatial experience in the Renaissance. She explains to me that viewing art in this period “was interactive and often mobile” and that the way that contemporary viewers walked through or touched the art was actually part of the narrative. “Images, objects, and spaces were meant to be handled, manipulated, opened, and explored, and this was integral to the aesthetic encounter.” While I don’t suggest you touch the art in Florence, walking through it, thinking about it and opening yourself up to the experience will take you back hundreds of years.

One-point perspective is an invention of the Renaissance. It’s something we take for granted today: a way to realistically represent the three dimensional on a two dimensional plane. But before the early 15th century, most painting looked pretty flat, so it’s useful to try to imagine how people must have felt when, through paint, they were suddenly seeing walls opening up into space. The first illusionistic paintings like Masacio’s Trinity at the church of Santa Maria Novella or Andrea del Castagno’s Last Supper for the nuns at Sant’Apollonia must have had a strong effect on contemporary viewers. For them it was like putting on a virtual reality headset.

Castagno’s fresco was painted in 1447 on the short wall of a long room – this was the refectory, or dining hall, of a Benedictine nunnery located about a block away from San Marco. It’s one of the few remaining places in Florence that tourists overlook, probably because it “only” has the one fresco and it’s none too famous. Open every morning, it’s free to enter, and most of the time you’ll be the only person in there, sitting on the chairs that have been conveniently placed in the center of the room. It’s worth it to stay a while, for it’s the kind of painting that only sinks in after a while.

As much as the chairs are tempting, you’ll want to walk around the space and try to imagine how a nun might have used it 500 years ago. She’d have entered through a door in the wall at the opposite end from the painting, having just ritually washed her hands before entering the dining hall. She would process in silence and take her place on a bench on one of the side walls, in front of which there would have been a long table. Under the image of the Last Supper, where Christ announces to his disciples that one of them will betray him, the community’s Abbess would have sat, below the image of Christ. The women would eat in silence, perhaps listening to a reading from the Bible. As they partook in the meal, their space was extended, through one-point perspective, in time and place to that of the Life of Christ.

Walking through spaces, imagining the past, coming face to face with the humanity of sculptures and the details of paintings is something that you can only do fully when you travel to experience works of art in person. For me, Florence is where I’ve had most of these “art moments,” but it’s something that happens all over the world when you combine art and travel. What about you? What works of art have struck you in person, and why?

On how we look at art