Artigianato e Palazzo, an annual exhibit and market showcasing Florentine artisans, is celebrating its 25th year in 2019, so it seemed high time I dedicate an article to it on this blog! It takes place every May in the historic Corsini Gardens, part of the private home of Princess Giorgiana Corsini, making it possible for the public to enjoy this fragrant space once a year. Princess Corsini recently opened up her home for an intimate aperitivo with a few of her friends and a group of bloggers and Instagrammers called Tuscany Bloggers so we could learn about the theme of this year’s show and visit the gardens while it was being set up for the event. 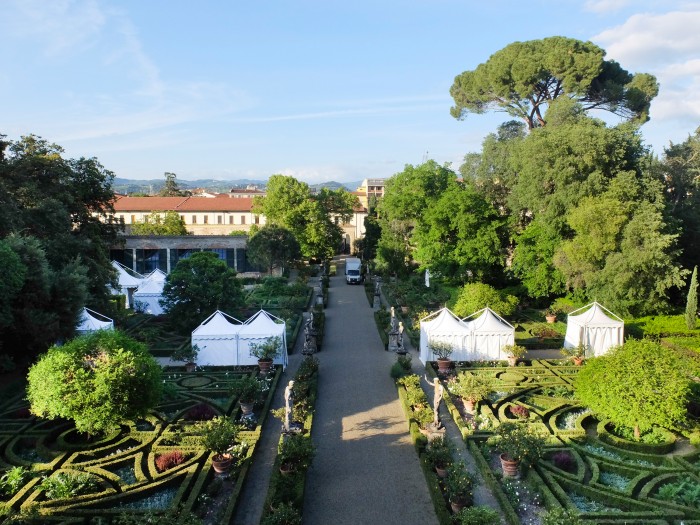 The garden while being set up for Artigianato e Palazzo, seen from the family’s terrace 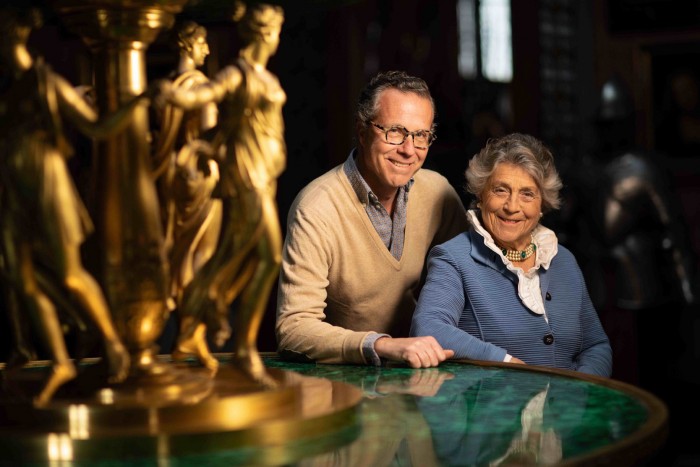 Artigianato e Palazzo is a project by the Princess Giorgiana Corsini and Neri Torrigiani to promote the principle of craftsmanship as a value. Torrigiani explained to me that “artisans are one of the great resources of Florence, but 25 years ago we found that they were closed up in their workshops, unable to deal with the economic changes of globalization.” Torrigiani set out to lend them a hand, and Corsini agreed, creating the perfect opportunity for her to share her beautiful gardens once a year, promoting a concept that is absolutely in line with the ideals that were in vogue back when this palazzo and gardens were first built.

Starting in 2018, the exhibit has also evolved into a fundraiser. Last year, 50k in proceeds were donated to an association that preserves works in the Doccia porcellain museum. The long-closed collection in Sesto Fiorentino is is composed of 8.000 works in porcelain, ceramic, maiolica, terracotta and lead; more than 13.000 drawings, prints and sculptures. While awaiting intervention on the part of the state, the Friends of Doccia Association ensures that the collection remains intact and preserved.

For 2019, Artigianato e Palazzo has chosen the theme “Memories of Russia in Florence“: funds collected will serve for the urgent restoration and preservation of some of the works of art dear to the Russian community which, throughout the 19th century and early 20th century embellished Florence with residences, churches and artistic collections. These include the finishing the restoration of the Russian Orthodox Church, the Hemicycle of the Evangelical Cemetery “agli Allori”, and restoring masterpieces of the Demidoff Collection housed in the Stibbert Museum. 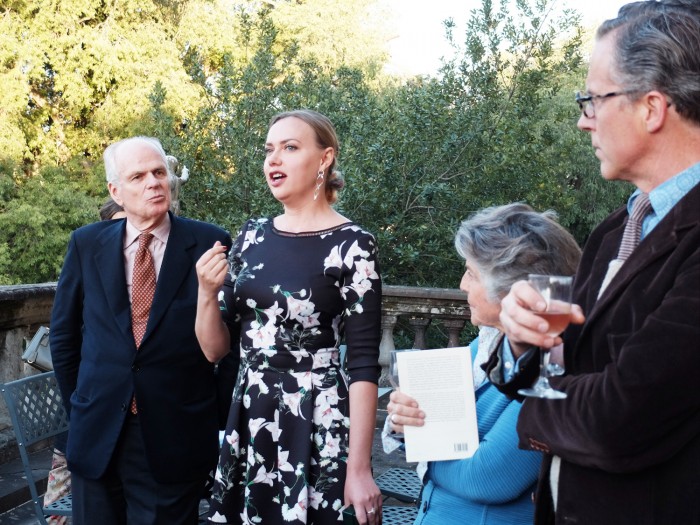 The choice to highlight the Russian community and these works of art stems from a desire to “pay homage to the multicultural identity of Florence,” Neri tells me, “so that people can become aware of a moment of particular harmony between the two cultures, which produced exceptional works of art.” At the aperitivo I attended at Palazzo Corsini, members of noble families with Russian ancestors shared family tales, remembering how their grandparents fled Russia, and reflecting on the great appeal of Florence for them. The Tuscan city has a long relationship with Russia, starting in the Council of Florence in the mid 15th-century; it grew in the 18th-century court, and solidified significantly with the establishment of a Russian ambassadorship here. Numerous monuments around the city are testimony to this long relationship; the most famous of them bear the name Demidoff, such as the Villa Demidoff outside Florence, where we often have summer picnics. 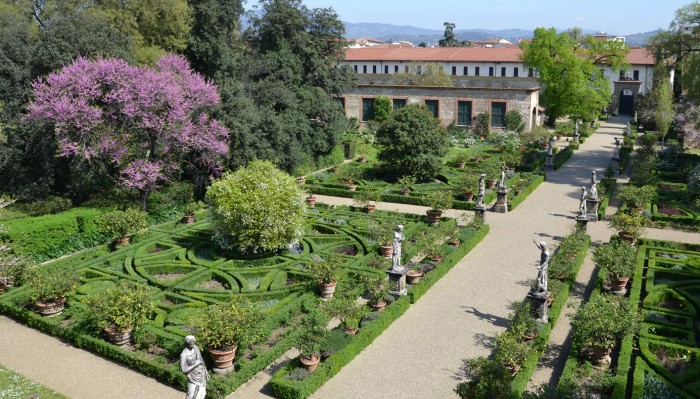 The Garden from above | Ph. Susanna Stigler

I’d never really noticed the palace on via il Prato, between bank buildings, hotels and one of my favourite Japanese restaurants. That’s Palazzo Corsini, still home to the Corsini family, and behind this is their formal garden, which occupies the entire block between via il Prato and via della Scala. This property belonged to the Acciaiuoli family and the garden was designed initially by Bernardo Buontalenti in the 1590s – you may recognize this name from his design of the Grotto in the Boboli Gardens. Buontalenti created a loggia, complex piping for fountains, and installed statues of the Four Seasons that now grace the ends of the Ponte Santa Trinita, as well as Giambologna’s Bacchus, now in the Bargello. Purchased by the Corsini family in 1620 when the first owners fell on hard times, the garden was altered by architect Gherardo Silvani. 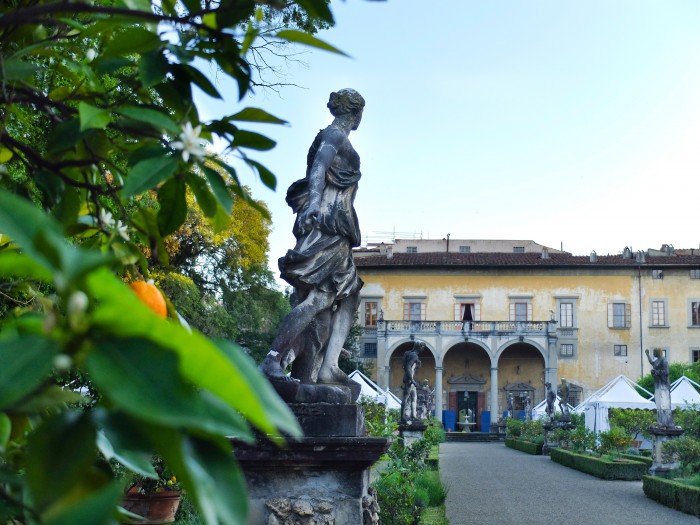 The central walkway that leads from the gates on via della Scala to the back of the building is lined with Roman statuary that increases in size as one arrives at the palazzo, helping create a sense of perspective; these figures also, for the most part, look towards the palace. 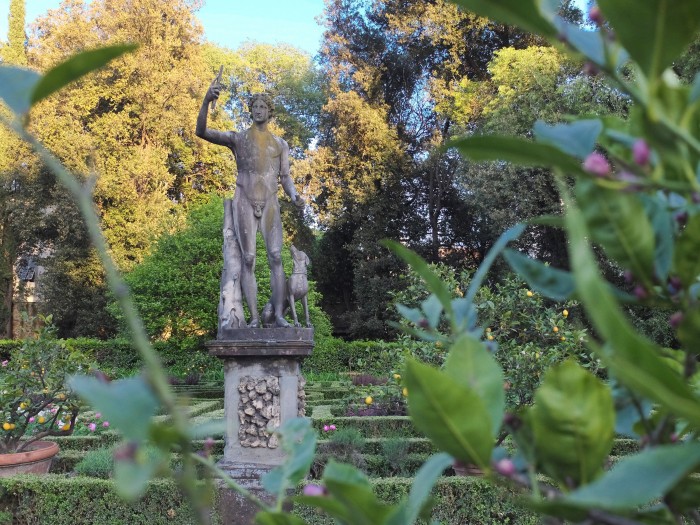 The garden is a formal Italian-style one, delimited by box hedges. When I visited, the smell of citrus flowers was dominant, thanks to the many lemon and orange trees that have been brought out from their limonaia. 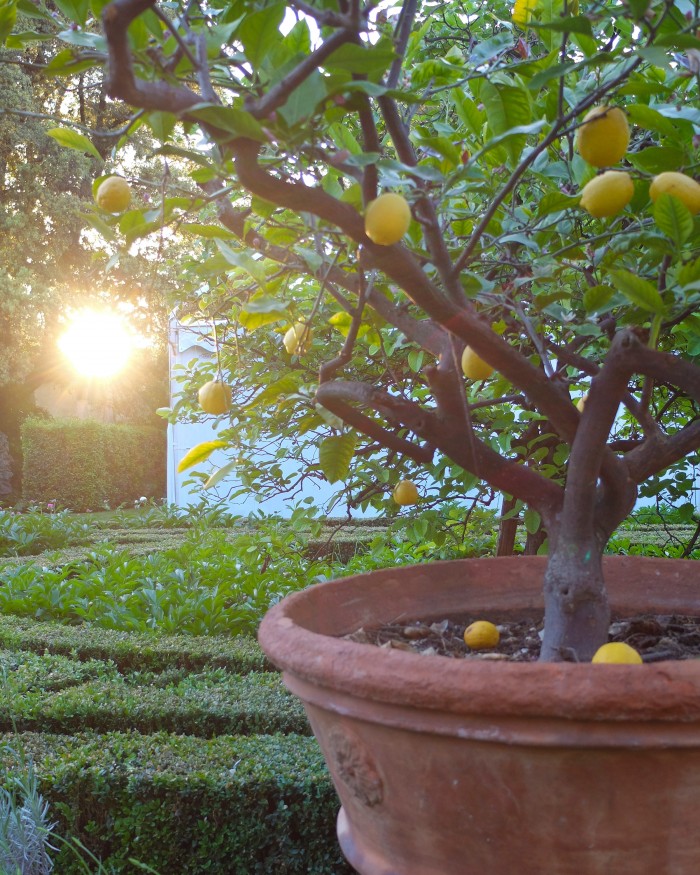 One of many lemon trees 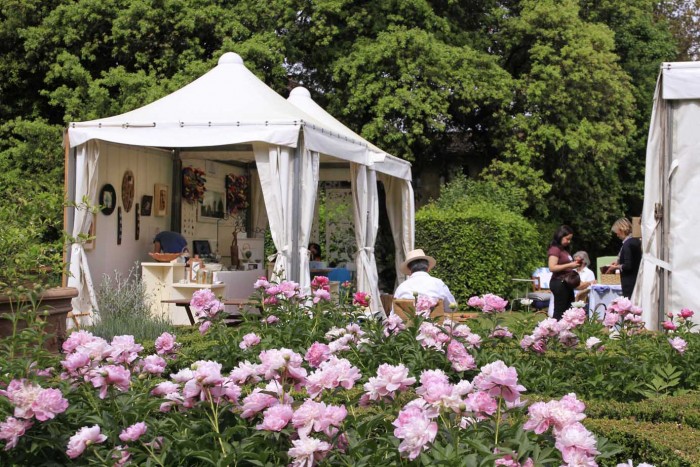 Called a “mostra-mercato” (exhibit – market), over the years the event has truly grown to include many sections, such as slots reserved for young artisans promoted by select bloggers, an exhibit highlighting one truly excellent artisan company, cooking shows on a theme, roundtable talks, workshops and concerts.

The founders’ connections in the city have helped it blossom with numerous corporate collaborations and sponsorships. For example, the results of the Russian-themed cooking show this year will be presented on custom Richard Ginori plates decorated with 18K gold leaf from Giusto Manetti Battiloro.

Over the years, over 700 different exhibitors have shown and sold works at Artigianato and Palazzo – artisans hand chosen to represent modern artisanship, firmly grounded in tradition. Not all of them are from Florence and Tuscany: in the catalogue I see some from Padova, Milan, Bergamo, Ragusa, Naples but also London, Japan and Holland! We’ll see accesories, jewelry, hats, ceramics, book binding, mosaics, stonework, tailoring, printing, textiles and more.