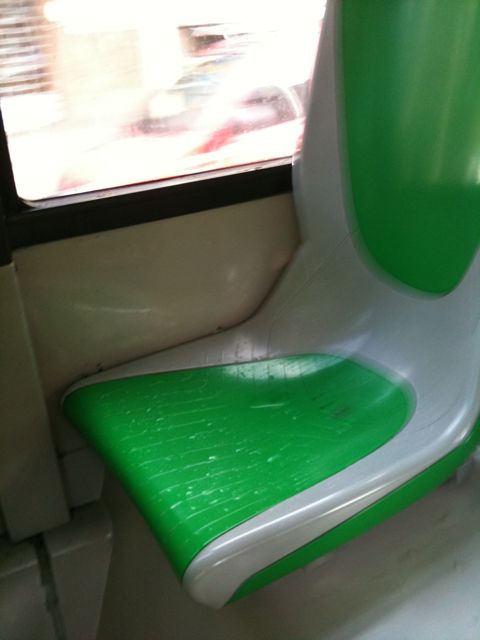 You know that I don’t normally complain about things in Florence. When they closed the Duomo area to busses and increased our morning commutes by anywhere from 5 to 20 minutes, I advised patience.

Perhaps it’s because it’s 40 degrees outside that I have somewhat lost my patience. I’m writing this post from a bus on which the air-conditioning is broken and dripping on all the seats; yesterday’s bus simply did not have a/c. Of course the bus is full and people have to stand in the aisles, looking longingly at the empty seats that line the right side of the vehicle.

On the whole, the ATAF bus system in the summer is absurd. When schools let out, they cut the schedule in half. Why? There seem to be plenty of people taking the bus, but the schedule cut is an annual tradition based on out-dated social practises as follows:

Myth/tradition #1: While traditionally Italian families move to the beach in July and August — and the typical middle class woman’s job was schoolteacher to accommodate kids’ morning-only school hours and 3 months of summer holiday — more and more women are working in other fields that don’t offer this “benefit”. So they’re here in the city.

Myth/tradition #2: Another tradition is company closure in August. Yes. Whole offices, including production, close for a month. A throwback to the days before air-conditioning that forced employees to the seaside at that time. Business is still slow enough in certain fields to merit this closure: my brother in law in fact gets August off. My office closes for the two central weeks of August, but major international companies (like GE/ Nuovo Pignone with its 3500 employees in Florence) are open all summer long. So are stores.

Myth/tradition #3: Italians have a lot of holiday time. This is in part true – good contracts start at 5 weeks’ holiday plus statutory holidays and “permessi” (hours for going to the doctor, etc.). But anyone with a temporary contract has either NO or very little holiday. And with the economic crisis, families cannot afford to go on holiday (though the term “staycation” has fortunately not been invented in Italian).

Who pays the price?

ATAF Firenze’s bus system runs in the summer on the principle that there are fewer users. But who are the system’s daily users, year-round? The elderly and “workers” (lavoratori). Take any bus at 8:30am and you’ll hear all of us workers complaining because clearly we don’t count for the city, despite being the ones that carry forth the economy.

That’s all, thanks for listening to my RANT – the trip has been long enough to write this post on an iphone because with the summer schedule it takes me 25 minutes longer to get to work, but alas, now my real job calls.