Name one sculpture by Leonardo da Vinci. Stuck? Me too. Leonardo is the great Renaissance man, the inventor, the draftsman whose wild lines imply motion and cannot be followed, the painter whose sfumato made mysterious madonnas. Hard to imagine those lines rendered in hard bronze. 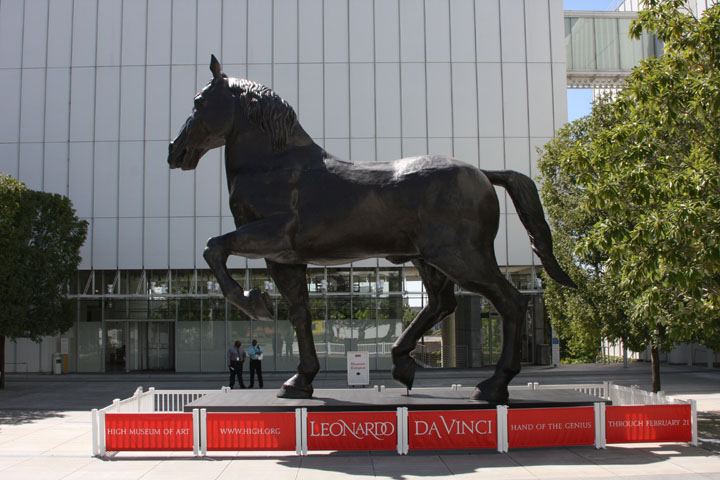 The exhibition now on display at the HIGH museum of art in Atlanta brings to public eye the importance of Leonardo as sculptor through an examination of the sculpture that Leonardo studied, the sketches and studies he created for his own sculptural projects (the majority of which were never realized), and his interactions with other Renaissance sculptors.

To me, the brilliance of this exhibition lies in its proposing two “new” sculptural works by Leonardo to the public – one small, and one very big. Let’s start with the small one. 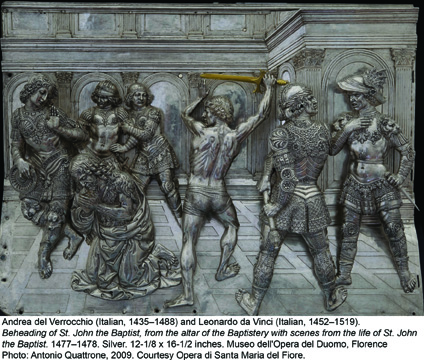 Guest curator Gary Radke (who was my professor at Syracuse University) has examined the recently cleaned Silver Altar of the Florentine Baptistery (1477-1483) and suggests that two figures in it are by the hand of Leonardo while he was still in the workshop of his master, Verrocchio. All the figures in the relief were created separately and inserted into the background, allowing for more than one artist to have contributed to the composition. The delicate lines of the proposed Leonardo figures, compared to the harsher linearity of the other figures in the relief, make for a convincing argument; we can easily parallel this observation with the recognition of the angel on the left in Verrocchio’s Uffizi Baptism (see this on wga.hu) as being by the young Leonardo in a similar style. 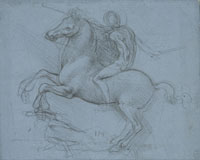 In contrast to the small scale of this work, which requires you to look closely with a magnifying glass, you cannot miss the 26 foot tall horse on display outside the museum. This is a reconstruction of a work planned by Leonardo to glorify Duke Francesco Sforza mounted on horseback (on commission of the patron Ludovico Sforza). This was to be a twice-life-sized bronze equestrian monument in action. A full scale model was completed in clay for an imperial wedding in 1493, but the bronze was never cast because, as Radke writes in his essential textbook on the Italian Renaissance (Art in Renaissance Italy):

Ludovico requisitioned the necessary bronze to produce cannons in an ill-fated attempt to keep French troops from invading Italy… The model was destroyed when it was used for target practise by soldiers after Ludovico’s fall from power in 1499. (p. 318, 1st ed).

Finally risen from the dead, the horse has been manufactured by Florentine artisans and shipped by UPS; it took a few days to put back together (think humpty dumpty) as per the amazing time-lapse video posted by the museum. 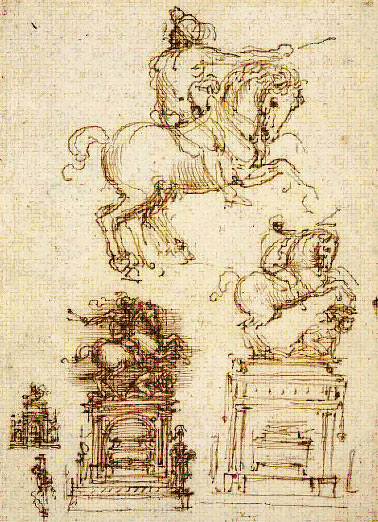 I have my reservations about the accuracy of the big horse in comparison to the Study for the Sforza Monument of 1488 (Royal Library, Windsor, 12358r) and to the later Studies for the Trivulzio Monument (Royal Library, Windsor Castle, 12355) both on display in the show. While these drawings both show a bucking horse over a defeated enemy, dominated by an energetic rider, the reconstructed horse stands alone. In this position, it is highly reminiscent of Donatello’s Gattamelata in Padova, with its tame tail and controlled hooves; surely an intended reference since the exhibition also explores Leonardo’s relationship to earlier Florentine sculptors including to the great Donatello.

On the other hand, the reconstructed horse has something of the grace of Leonardo, and may reflect one of the earlier, more static poses that the artist planned for the Sforza monument. In the end, mounting a horse (pun intended) of this size is certainly a coup, and it well serves the purpose of suggesting the magnitude of what Leonardo’s sculptures might have been, had money and peace been on his side.

A note on tickets and membership: Adult tickets cost 18$ and members get in free. As a previous resident of Atlanta I can tell you that membership at the HIGH is a great deal; the monthly Jazz nights and hands-on activities are exemplary of good museum education and something I hope to import to Florence (despite my limited influence). See www.high.org for details.

About Leonardo da Vinci (from High Museum press release)
Leonardo da Vinci (1452-1519) is widely recognized as a scientist, inventor, philosopher, writer, designer, sculptor, architect, and painter. His artistic apprenticeship took place in Florence in the workshop of painter and sculptor Andrea del Verrocchio. In the early 1480s, he left Florence for the court of Ludovico Sforza, Duke of Milan, where he was to spend much of his career. During his early Milanese period he painted his iconic Last Supper. He fled Milan after the French invasion of the city in 1499 and returned to Florence, where he painted the Mona Lisa, and continued his technological, geographical, and scientific studies. He returned to Milan in 1506, and after spending some time at the Papal Court in Rome, accepted an invitation from Francis I, King of France, to work at his court, where he remained until his death.

MORE INFO: At the High Museum of Art in Atlanta from October 6 2009 until February 21, 2010; a modified version of the exhibition will travel to the J. Paul Getty Museum in Los Angeles (March 23 through June 20, 2010). Organized in collaboration with the Opera di Santa Maria del Fiore and the Opificio delle Pietre Dure in Florence, Italy. The accompanying publication, “Leonardo da Vinci and the Art of Sculpture,” is supported by the Friends of Florence, a non-profit international foundation based in the United States. The exhibition is curated by Gary M. Radke, Dean’s Professor of the Humanities at Syracuse University and Consulting Curator of Italian Art at the High Museum of Art. Restoration of Rustici’s “John the Baptist Preaching to a Levite and a Pharisee” from the façade of the Baptistery in Florence was sponsored by the Friends of Florence.

All photos used with permission.