Art of the 20th century in Tuscany is the focus of a series of exhibitions and events this fall organized by Piccoli Grandi Musei (Small Big Museums), a regional-based project by the Ente Cassa di Risparmio di Firenze bank. Researchers found that there are a good 100 museums and public collections in the region where you can go to see works from the Novecento, and they’ve done an excellent census of them. But curator Lucia Mannini and her team at Villa Bardini got to thinking how interesting it would be to get a look at a whole corpus of works from this period that are not normally accessible to the public.

Between a large collection for the offices of the Monte dei Paschi di Siena, others in archives requiring special passes to get in, and many in private homes, there’s a wealth of works that tell the story of collecting practices and taste of the past century. 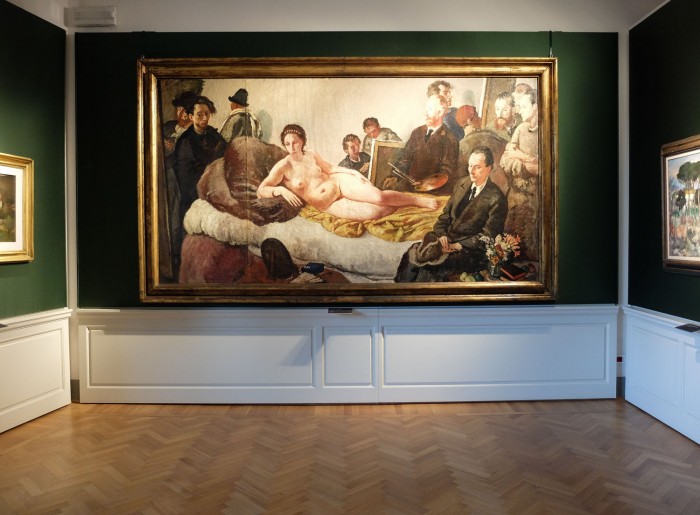 Villa Bardini’s exhibit Toscana ‘900 Da Rosai a Burri. Percorsi inediti tra le collezioni fiorentine is thus a story of collections perhaps more so than of the paintings they contain, with an additional layer of curatorial choice to create a show that represents the first fifty years of artistic production in Florence and Tuscany. The exhibit is is located in the quiet and uncrowded Villa Bardini, a series of intimate rooms that were once an apartment, and it’s also an opportunity to see its annexed gardens high above the city, with an incredible view of everything below.

The exhibition is divided into sections based on the collections from which works were borrowed. The first, substantial part comes from loans from the Monte dei Paschi di Siena, the historical bank in Siena that incorporated the Banca Toscana, who purchased these works in the 1980s. This bank worked with a group of art experts and consultants to create a really unified collection of works from the first part of the 20th century in Tuscany, at a moment in which these artists were starting to become a bit famous; the purchases also contributed to their fame and market value, which the bank promoted through exhibitions and catalogues. But the function of a bank collection is also practical: other than investment, it was to decorate the walls of their offices. The largest and most important ones were in the Director’s and President’s offices, and the others are still kept in various rooms, making it unlikely that the public would ever get to see them… and yet they are totally worth taking a closer look!

Two large paintings from 1928 greet us in the first room and they are complete opposites. Felice Carena’s La Scuola shows the members of the art institution at which he was a teacher – the Accademia in Florence – and is also a statement on what this period felt was important in art, i.e. the human body and not still life, which is literally pushed off to one side. This huge painting was acquired from the Pittsburgh Museum of Fine Arts when they decided to de-accession works that didn’t fit their collection, and it hung above the desk of the bank’s president. The classicism of a work like this is apparent particularly in the position of the reclining female nude, whom we see in works by Titian and Giorgione. 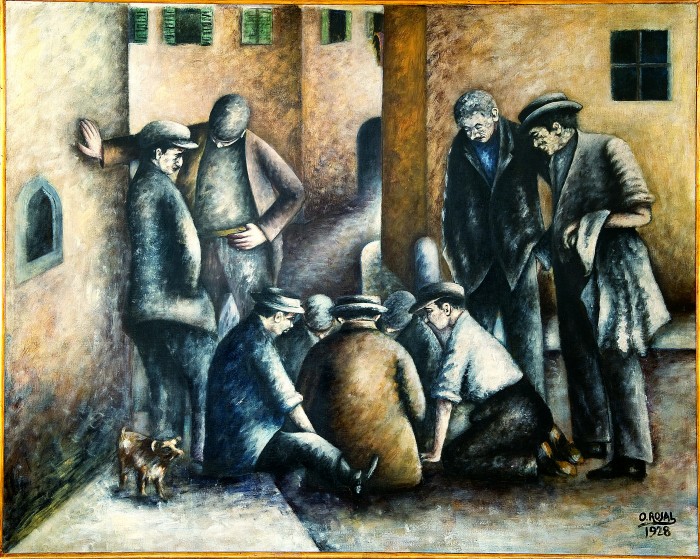 In contrast to the “academicism” of Carena is the down-to-earth Giocatori di Toppa of the same year by Ottone Rosai. This anti-Bourgeois Florentine artist showed the nitty gritty of the streets and the daily life that took place in Florence’s dark alleys. The solid forms engaged in play remind us of two other Tuscan pioneers, Giotto and Masaccio, whose work, when reproduced in black and white, had something of this realist effect. 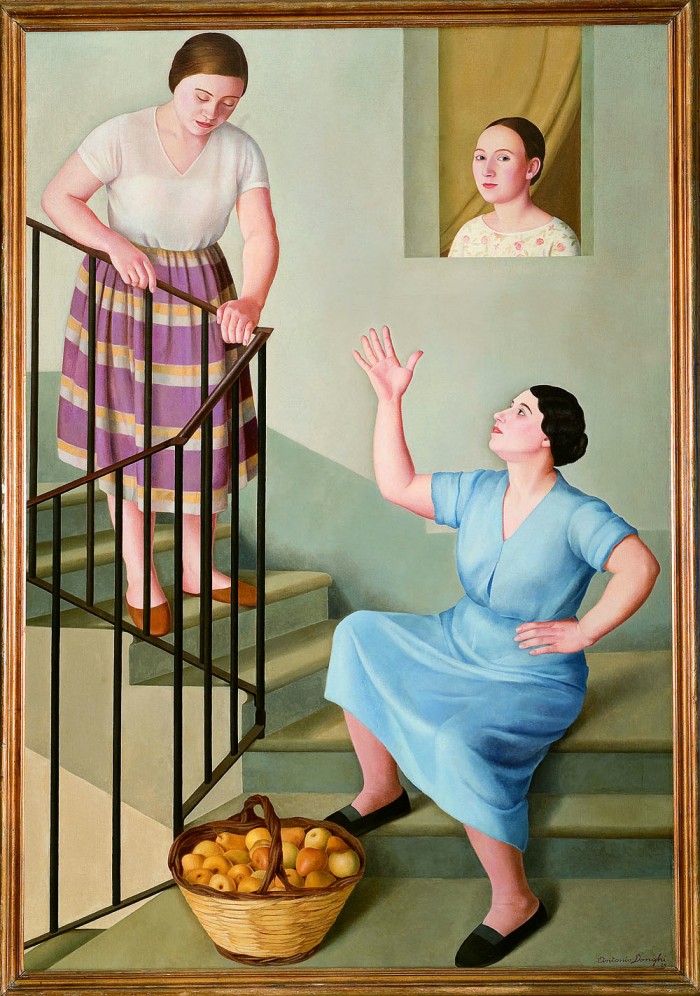 Different again is the work chosen for the exhibit’s poster – in part, the curator admits, because the graphic artist could use its open space! But also because everyone is fascinated by this very realistic slice of life depicting women in conversation on the stairs of their household. This is Antonio Donghi’s Donne per le Scale of 1929, a work admired by the art historian Roberto Longhi, who sees in its conceptual realism and stillness echoes of Piero della Francesca. 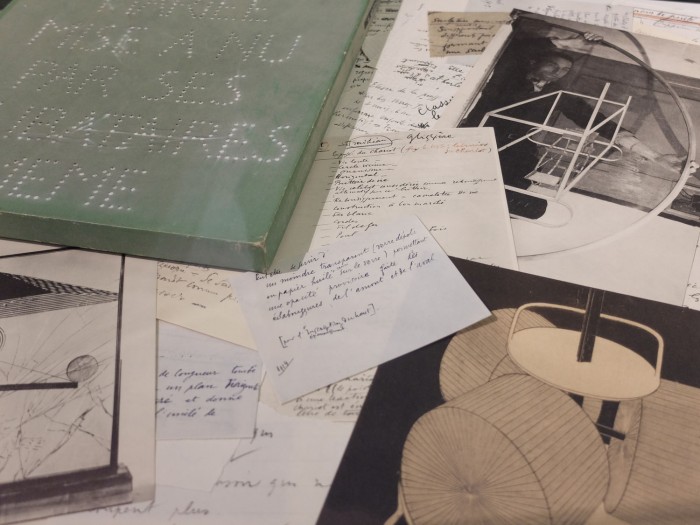 Anyone who has held a library card in Florence knows that this city’s treasures are infinite. The Biblioteca Nazionale has 135 kilometers of bookshelves full of printed materials. A number of these items are not accessible to standard card-holders but require special permission, for study reasons, to access. This includes the rare manuscripts and early printed books, but also an amazing collection of artist’s books from the 1960s onwards purchased from collector Loriano Bertini in 2000, to which were added other similar works.

In love with this playful artist’s book by Enrico Baj, 1972 from the #bncf collection in the @villabardini exhibit #toscana900 #blogger4T900 #tuscanybuzz

I think that artist’s books, produced in single or limited editions, are one of the greatest demonstrations of creativity – they go beyond our limits of the object we know as “book”, they combine media, they make fun of rules. In this exhibit there are Futurist books, a box with lego on it, musical notes with drawings by Braque, a box of crazy stuff by Marcel Duchamp and a pop-up book by pop-artist Andy Warhol. 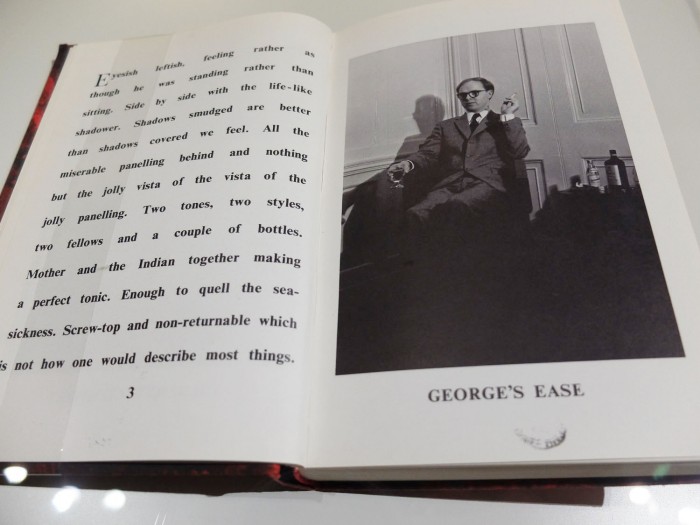 I love them all, but perhaps my favourite is “Dark Shadow: Gilbert & George and the Sculptors”, published in 1947. It looks like an entirely normal book with haughty portraits of scholars and a series of essays printed in rather large lettering. But the text is all complete nonsense! It’s a sculpture in words, and it makes fun of so many boring books out there. 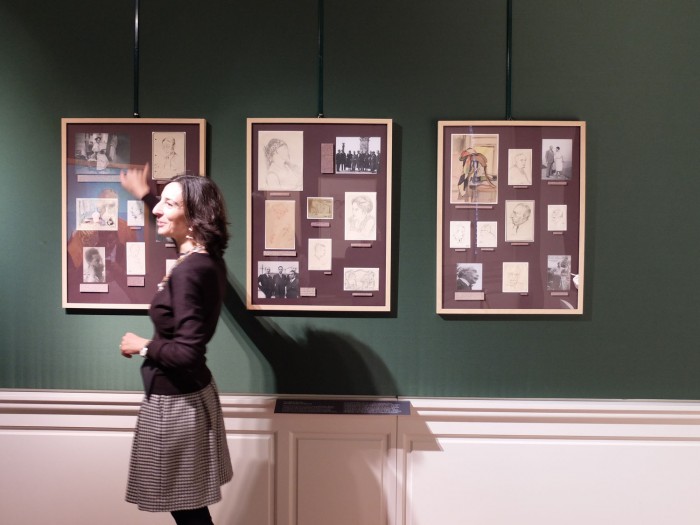 Lucia showing us works from the Bonsanti archive

A small room holds a slice of one collection, the Archivio Bonsanti, of the Gabinetto Vieusseux, an important library for the 19th-century expat population in Florence. The Director of the institution collected sketches, documents and portraits of important figures of the artistic, critical and intellectual world of his time. 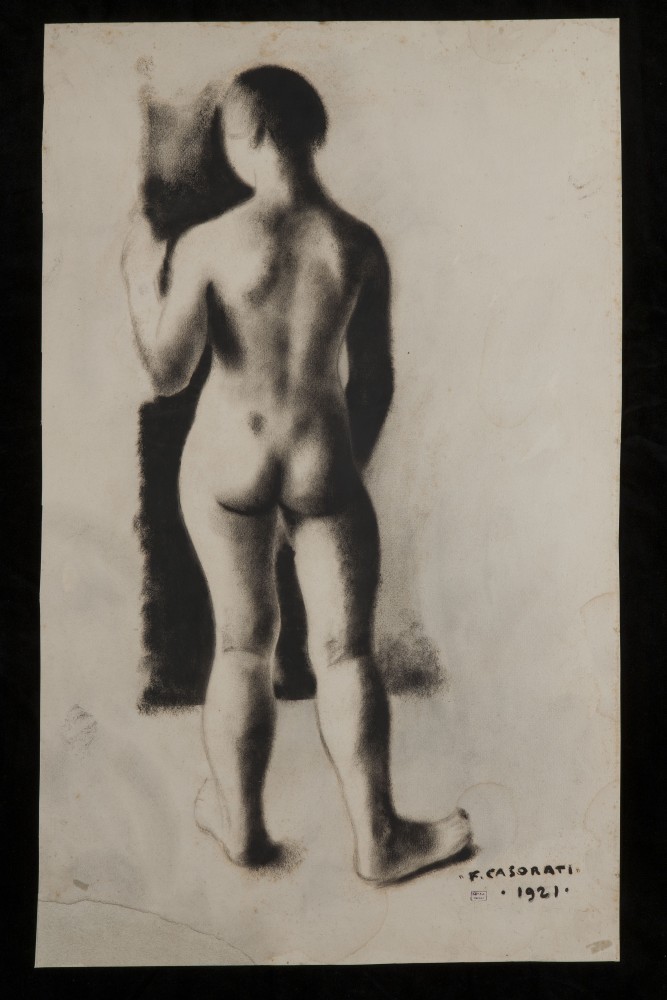 Florence’s two most prestigious art schools also have a place in this exhibit. It should come as no surprise that the Accademia delle Belle Arti (next door to the museum of the same name) has a good collection of art; the part selected to show at Villa Bardini is the result of a forward thinking professor who became “Presidente” of the instutition in 1933. Felice Carena wrote to all his artist friends asking them for one of their drawings. The purpose of the collection was to instruct then-students. Being rather influential, he received some 200 drawings back. In the selection hung together here, one can see that it is truly a school of technique, style and moments of the artistic process. Primarily figure drawings, the focus of this time, these works in different media are rarely shown to the public. 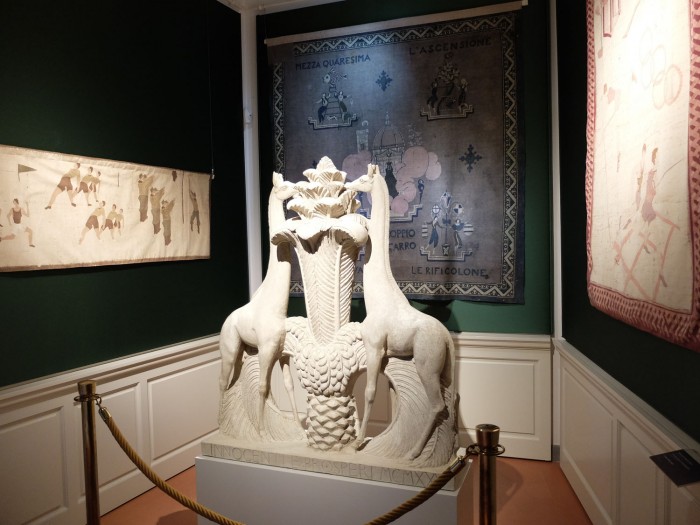 I was most surprised to learn of a collection of the best artworks by students at the Istituto d’Arte at Porta Romana that teachers have been stashing away since it was founded in 1924. City-wide end of the year thematic exhibitions spurred students to create their best works, and these have been saved by the school, alongside hundreds or maybe thousands of mostly uncatalogued studies, textiles, demonstration works and more. It’s impressive to see how these young artists perfectly reflected and shaped their artist periods, creating works that speak a recognizable language even today. A small room in the exhibit shows works from the 1920s and 30s in metal, batik and gesso. 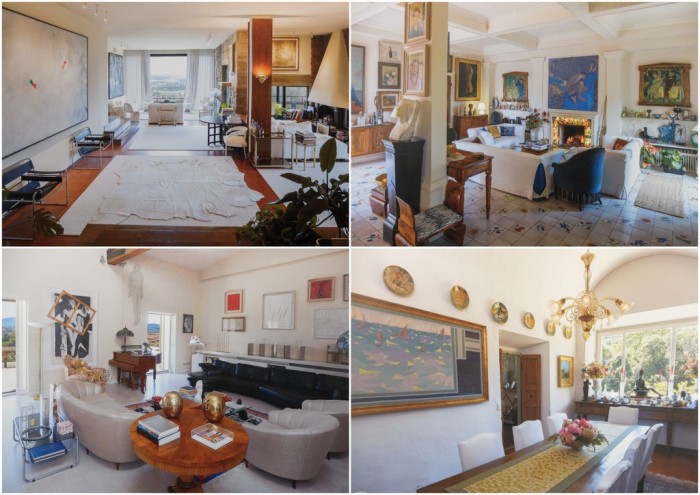 Four of the private homes from which works were borrowed for this part of the exhibit.

I think my favourite thing in this exhibit might be a wall with photos of the main rooms of about 20 homes in Florence that possess art that you and I could only dream of. In different styles and with different collecting logics, each local collector does an important job of preserving but also simply living with and enjoying these works. And they have generously lent their works, giving curators free choice of which items to include in the two rooms that conclude the exhibit. There are paintings and drawings by Castellani, Fontana, Burri, Rosai, Thayat, and even Henry Moore. 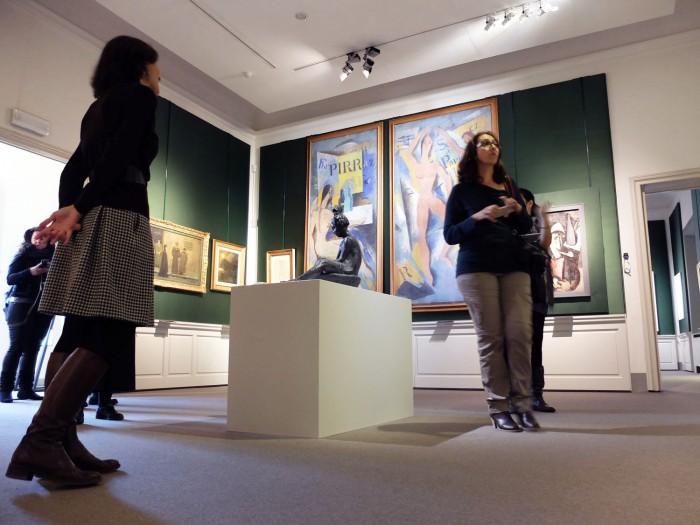 One of the two rooms showing works from private collections

You’d think that works from private homes might be smaller or of lesser quality than those found in important collections, but this isn’t at all true. Two wall panels after a drawing by Picasso are floor-to-ceiling in one collector’s house. Others own pieces by Alberto Burri or Primo Conti, both of whom have whole museums dedicated to them. 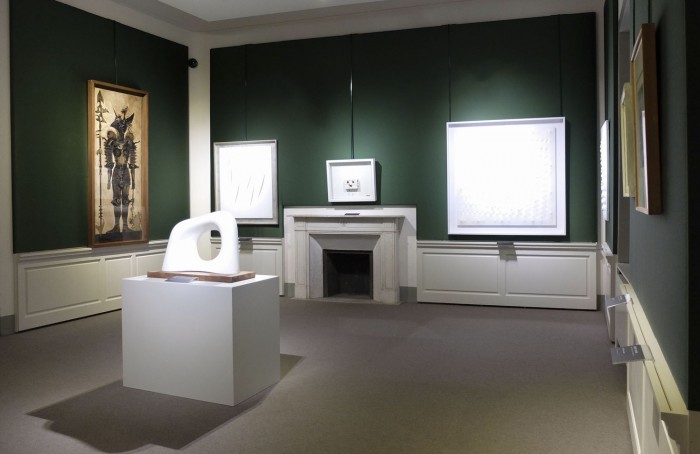 A sinuous piece in Carrara marble at the center of the room is by Kan Yasuda, a Japanese artist who has been working in Pietrasanta since the 1970s. In a way it represents the contribution that Tuscany has given to the art world, not just through the works themselves that we’ve seen here, but through materials and ideas that are exported worldwide. 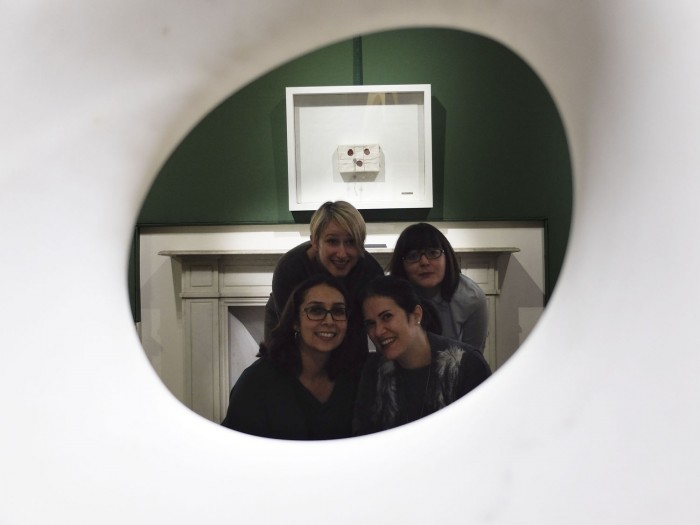 With Thanks: I was invited to a special curator-led talk in the company of three other bloggers: Elena Farinelli of Io Amo Firenze, Lourdes Flores of VisitFlorence and Valentina Veneziano. I’d like to thank curator Lucia Mannini for her excellent and engaging presentation, Toscana 900, Fondazione Tema, Piccoli Grandi Musei, Ente Cassa di Risparmio, Villa Bardini, and last but not least, the fabulous organizers Tuscany Buzz, a new culture-focused blog engagement team in Florence.