Florence’s most notorious scarlet woman left an elegant mark on the city that loved to hate her.

Arttrav is pleased to host this innovative and well-researched article by US-based writer Joanne O’Sullivan. 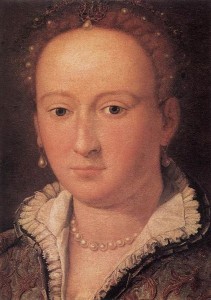 From her portrait on walls of the Uffizi gallery, the Grand Duchess of Tuscany stared out at me, begging to be reconsidered. Reviled in her time as a spy, witch, and even murderess, Bianca Capello’s life spans the middle years of the 16th century, swelling with every romantic element imaginable: doomed love, treachery, alchemy and poison. The reckless daughter of Venetian aristocracy who became first mistress, then wife to the dour Grand Duke Francesco de’ Medici, Capello made few friends in her adopted city and died under mysterious circumstances in 1587, just a day after her husband. But while she may not have left a sterling legacy, she left her mark on Florence, and her presence can still be felt today. Retracing her footsteps provides a fascinating glimpse into an often-overlooked period in Florentine history. 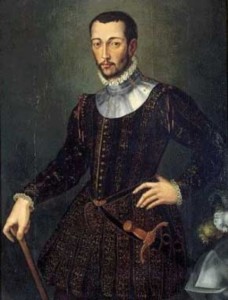 In 1563, the ravishing fifteen-year-old Bianca (related to one of Venice’s oldest families through her mother) was promised in marriage to a Doge three times her age when she eloped under cover of darkness with a Florentine bank clerk she had spied from her window. Piero Bonaventuri, son of a once-prominent Florentine family, spirited Bianca away to his family home in Piazza San Marco (said to be Piazza San Marco, 1) and the two were declared outlaws in Venice.

Bianca soon found herself in greatly reduced circumstances, doing chores for her husband’s penniless parents. The story goes that while taking a break from her drudgery one day, she was seen at the window by Francesco de Medici, eldest son of Cosimo I, who was often in the area visiting his casino di delizie (little house of delights) now the Court of Appeals (via Cavour, 57). It was love at first sight for the odd, somber, future Grand Duke, whose hobbies included alchemy, making porcelain and fireworks, and from that moment on, pursuing the lovely, lonely Bianca.

Once positioned as Francesco’s mistress, Bianca (along with the cuckolded Piero) was set up in the Palazzo Venturi-Ginori (via della Scala, 85) with its adjoining gardens the Orti Oricellari (via degli Orti Oricellari, 9). Built in the 1490s by Bernardo Rucellai (the brother-in-law of Lorenzo il Magnifico), the property was (ironically) once the seat of the Platonic Academy, host to Renaissance thought leaders such as the humanists Pico della Miradola and Marsilio Ficino, and Machiavelli. 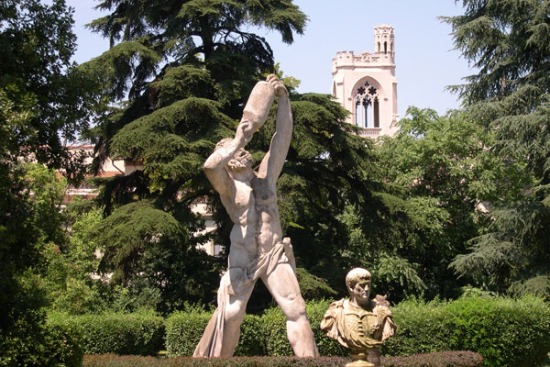 Polyphemus in the Orti Orticellari, by Antonio Novelli (photo: author)

Under Bianca’s supervision, the gardens, which had fallen into disuse, were restored and became the scene of frequent amusing parties. For one event, Bianca is said to have had the garden fitted with a concealed trap door that, when triggered by unsuspecting guests, led to an underground pit occupied by servants in devil masks. Traumatized partygoers were later welcomed above ground by maidens wearing little more than body paint and strategically-placed jewels. Today, the giant statue of Polyphemus commissioned by Bianca and executed by Antonio Novelli still graces the garden.

In 1565, Francesco entered a loveless political marriage to Joanna, the daughter of the Austrian emperor, and in 1574 commissioned the versatile artist Bernardo Buontalenti to build Bianca a house closer to the Medici’s Palazzo Pitti. Today, the Medici crest is still visible on the façade Casa Bianca Capello (via Maggio, 26) along with the etched-stone Capello family crest, a hat that looks rather like a pith helmet. The exterior decoration is by Berndardino Pocetti, in the black and white sgraffito technique of which he was considered the master. Pocetti used sea birds and dolphins in his designs to remind Capello of her native Venice. 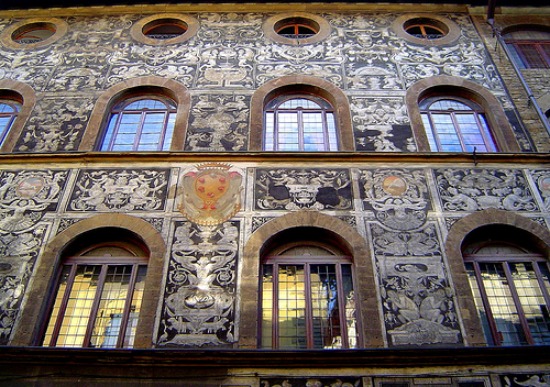 Florentines were not overly fond of Francesco, who had build the Vasari Corridor over the Ponte Vecchio so that he wouldn’t have to interact with commoners. But enemies of Venice that they were, they were even less fond of his mistress Bianca, who was said to have hired assassins to off Bonaventuri, who was ambushed and killed on the Ponte Santa Trinita. (In truth, he was murdered by the brothers of his mistress, whom they also killed for shaming the family). 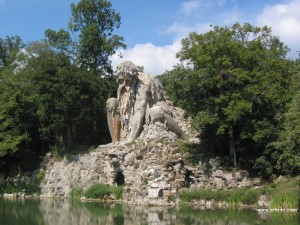 Among the numerous Medici country homes, none compared to the magnificent Pratolino, the villa and gardens just outside Florence (via Bolognese, Pratolino, about 12 km outside Florence) designed for Bianca by Buontalenti. In it’s day, Pratolino must have seemed magical, featuring water gardens with automated statues, secret grottos, twin waterfalls cascading down the front lawn, and benches that squirted water on unsuspecting sitters. Peacocks and exotic game roamed the grounds and the quiet was occasionally disturbed by rumbling explosions as Francesco experimented with fireworks in his lemonhouse.

While the original villa was abandoned and then destroyed in 1820, the property is now a public park (open May-September) featuring the original pageboy house, now called Villa Demidoff after the Russian prince who converted it into a home in the nineteenth century. The original chapel remains, as well as traces of the grottos, but the park’s real star attraction is the Appennino, the 33-foot-tall colossal statue by Giambologna, rising from the primordial ooze of a pond, representing the late Renaissance fascination with man’s attempts to dominate nature.

When the Grand Duchess Joanna died in 1578, Francesco and Bianca were married, first secretly at Palazzo Pitti, then very publicly in a ceremony at the Duomo in 1579, to which Bianca arrived in a carriage drawn by lions. Now the Grand Duchess of Tuscany, Bianca was forgiven by her family and the Venetian doges, who named her a “true and particular daughter of the Republic.” Settled into married life, Bianca invited her brother Vittorio to join her, making more enemies at court and further fueling the long-standing rumors of espionage for Venice. Francesco, in turn, solidified his eccentric reputation, conducting alchemical experiments in his secret studiolo (Palazzo Vecchio, Piazza Signoria). His fascination with the production of ceramics and porcelain in particular produced a collection of exquisite objects now on display at the Porcelain Museum at Palazzo Pitti. One small fragment of a piece of porcelain produced by his alchemical experiments is on display at the Bargello museum in the Majolica room.

Murder Most Foul, Poggio a Caino 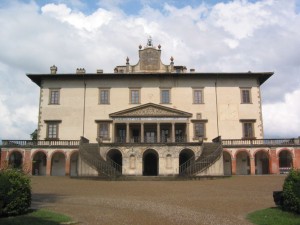 Lorenzo the Magnificent built the Villa Medicea di Poggio a Caiano (Piazza dei Medici, 12, Prato, about 20 km from Florence) as a hunting lodge. Bianca Capello is said to have hated the place, which wasn’t elegant enough for her taste, despite the graceful frescos by Pontoromo. Ironically, it was here that she spent the last night of her life.

What happened at the villa on a day in mid-October 1587 has long been a mystery, but while hunting with his arch-rival, brother Cardinal Ferdinando de’ Medici, Francesco fell ill, and within 48 hours both he and Bianca were dead. The newly ensconced Grand Duke Ferdinando cited malaria as the cause, but rumors spread that Bianca had baked a poison tart intended for her brother-in-law, and when her beloved husband mistakenly sampled it and fell ill, she committed suicide by eating it as well. While Francesco was remembered with a lavish civic funeral, Bianca’s body was never found, and the Capello crest was summarily chiseled off all Medici residences.

In Michelangelo’s Medici Chapels (Piazza Madonna degli Aldobrandini, Church of San Lorenzo), you can now find the Grand Dukes Francesco and Ferdinando, such bitter enemies in life, spending eternity side by side in matching marble tombs. In 2006, Francesco’s remains were exhumed and toxicologists conducted tests, concluding that his tissue contained evidence of arsenic poisoning. A 2010 study reversed that finding, suggesting the cause of death was malaria after all. We may never know what really happened to the couple, but there’s no question that even centuries after her death, bewitching traces of Bianca Capello’s larger-than-life story still linger in the city that loved to hate her.

Author bio: Joanne O’Sullivan lived and worked in Florence as an English teacher and educational travel programmer. She now writes about art, travel and culture from Asheville, North Carolina. You can read more of her writing about traveling with kids at The Wanderlists or download Joanne’s ebook “The Art Lover’s Guide to Traveling with Kids (North American edition)” at www.guidegecko.com.