The Art of Jewelry: Buccellati at Palazzo Pitti

UPDATE: If you missed it at Palazzo Pitti, this show has moved to Reggia di Venaria (Torino) where it will be open from March 21 to June 21, 2015

It’s not every day that I get up close to a collar with 1693 diamonds (over 23 carats) on it, or to a 40-carat emerald pendant hung on a string of rubies. My lifestyle and modern security measures don’t really call for this type of luxury, which is probably why before yesterday, I’d never heard the name Buccellati. Thanks to a new exhibition of 32 masterpieces from the Fondazione Buccellati at Palazzo Pitti’s Silver Museum, I now know that this is one of the world’s most important jewelers. I also figure I’ve made some mistakes in my life somewhere along the way, because I don’t own anything of theirs. Yet. 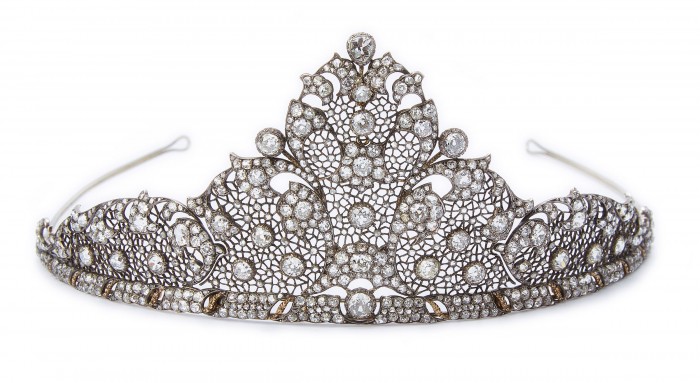 The fascinating history of this jewelry empire begins with Mario Buccellati, born in Ancona in 1891 and moved, with his mother and brothers, to Milan at the death of his father. At age 15 he began work as an apprentice at an important Milanese goldsmith of the time, a business he took over upon returning from WWI. During the 1920s, he had significant success, counting the royal family of Spain amongst his clients. In this period he established some of the elements that were to become signature Buccellati style, mainly the delicate tulle-like gold created through a series of miniscule triangular, square or pentagonal holes that simulate the shape and lightness of beeswax. This technique was used on everything from tiaras to cigarette cases, applying classical and art-deco styles as per clients’ requests. 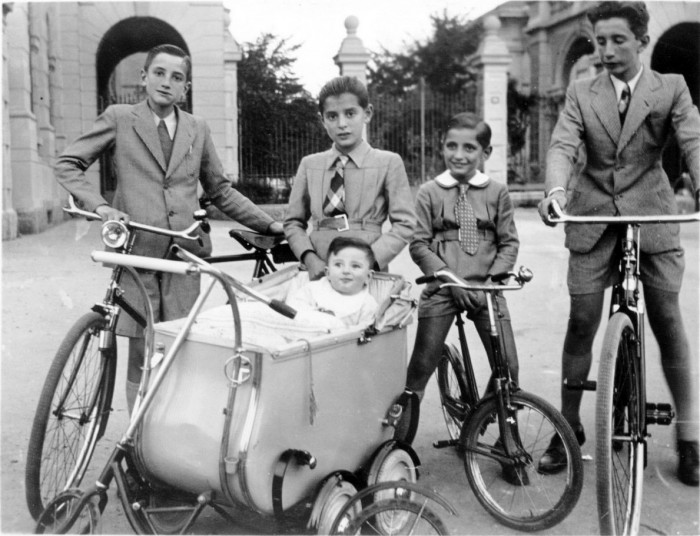 Amongst the significant production of this period are pieces for the famous poet Gabriele d’Annunzio – everything from a bookmark to eye glasses – and a series called the Coppe di Boscoreale, reproductions of Roman objects from the period ranging 1 BCE to 1 CE that had recently been discovered in 1895. Buccellati was not just interested in creating reproductions for the sake of it, but in learning the techniques of the ancients which he faithfully revived here. 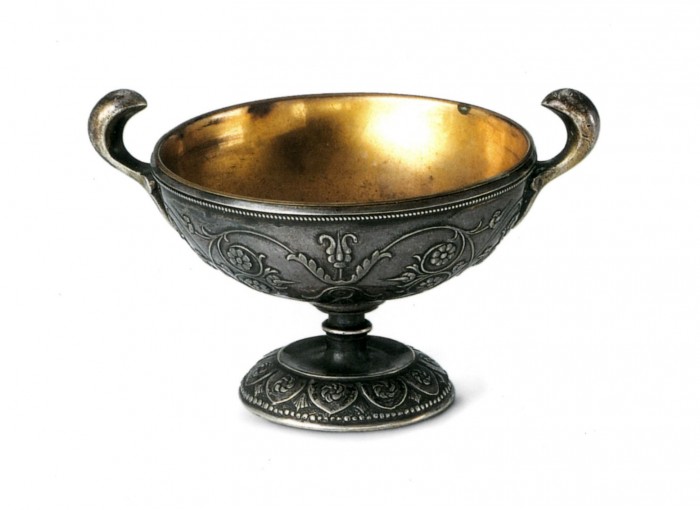 Mario’s son Gianmario took over the family business at the death of his father in 1965. Born 1929, he began working at age 16, quickly mastering the full vocabulary of traditional techniques. Although technique is at the base of the family’s work, the younger Buccellati wished to distinguish his own style from that of his father, so there is a dialogue between works by the two, a search for a trademark form that evolves over time but remains dominated by the characteristic of quality workmanship and material. His work has been exhibited in museums worldwide. 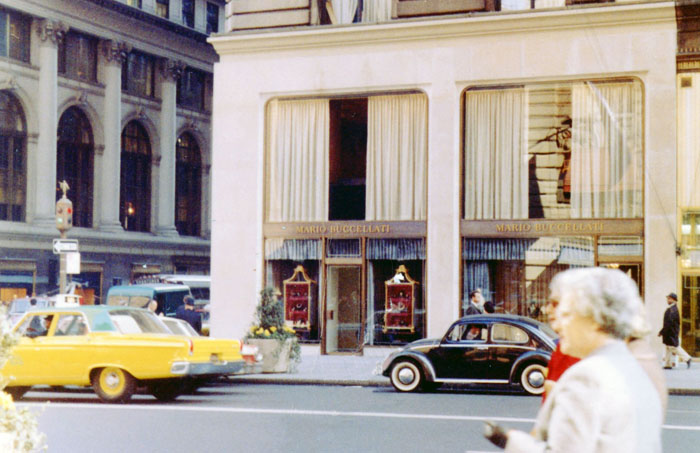 Gianmario is responsible for the design of hundreds of thousands of pieces, but he’s also an astute businessman, having been in charge of the family store in Milan from the age of 19; he’s opened franchises and boutiques around the world, in Tokyo, Montecarlo, Paris and of course near the Ponte Vecchio in Florence. He is also at the head of a luxury group, with property, wholesale silver and gold, luxury watches and more under his control.

The Florentine exhibit is the culmination of a lifetime of work for Gianmaria Buccellati, who at 85 years old shed tears of emotion at this achievement. For someone who has dealt with perhaps some of the richest clients in the world, who has created over 200,000 drawings for jewelry and luxury items, who has himself sculpted objects worth millions, he is a very humble gentleman. 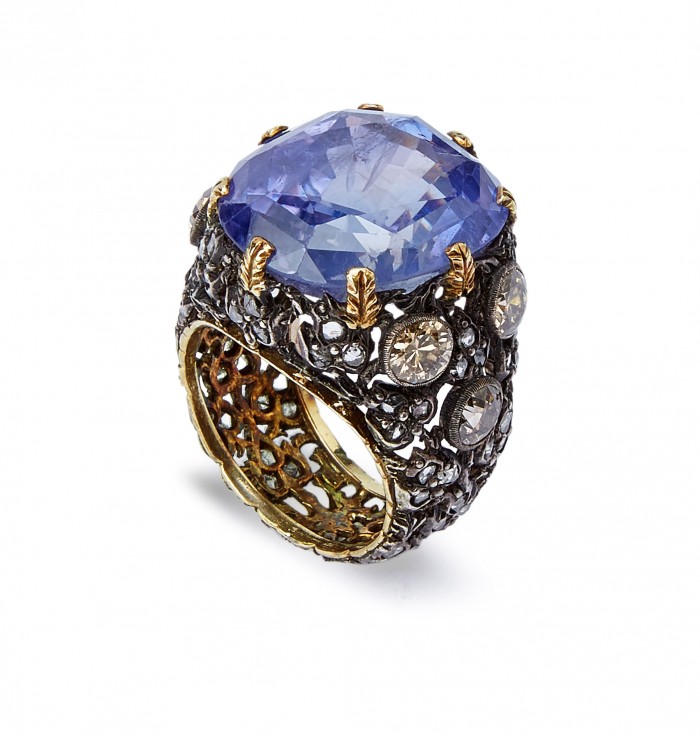 The Fondazione Buccellati has organized an exhibit of creations in their collection as well as from private collections around the world. The 32 objects on display in the modern and contemporary rooms at the Silver Museum in Palazzo Pitti are to be considered examples, specimens, of the life work of two men, a work that preserves a long history of goldsmithing. The arte orafa, literally the art of goldsmithing (though today we’d call it jewelry) was first codified by the Florentine Benvenuto Cellini (1500-71). It’s been preserved in north-central Italy, handed down from master to apprentice. It uses a language that is entirely Italian: in the catalogue’s glossary we read of filigrana, sbalzo e cesello, traforo, niello, intaglio. 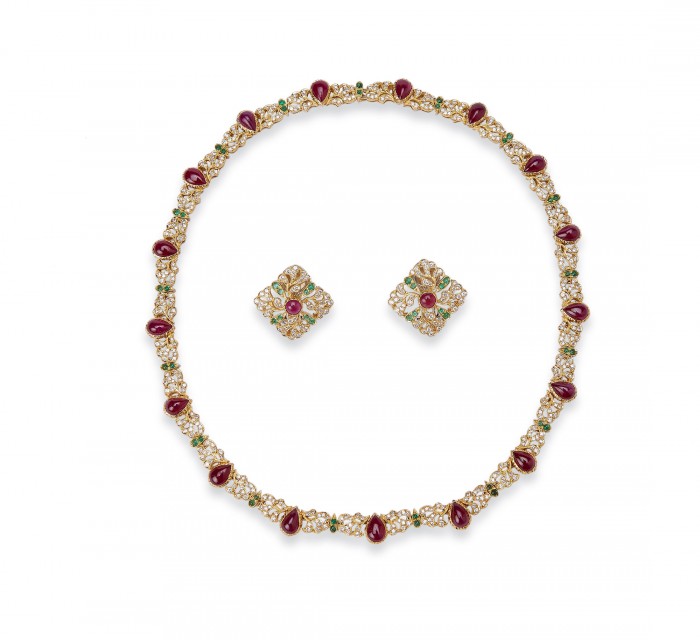 There is a Florentine connection also in the history of these objects. Gianmaria Buccellati visited the Pitti Palace in 1968 and was taken by the rich pietre dure “coppe” or chalices commissioned by the Medici. He began the creation of a series of “precious objects” – his own name for them – that were inspired by the Medici’s. Starting with amazingly clear crystal or stone bases, he ornaments these cups with the most incredible gold and precious stones. One of these is part of the permanent collection of the Smithsonian Museum, but mostly they remain in his personal collection, for they are objects he made for his own personal pleasure. 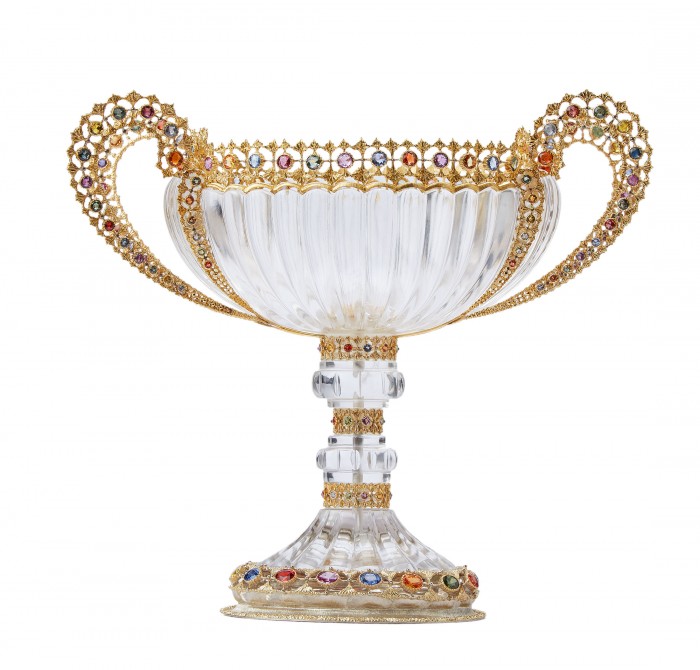 The jewelry on display in this exhibit is sure to catch the fancy of all the ladies who see it. I found myself picturing the dresses and lifestyle that must have accompanied these impressive items – not to mention the safety deposit boxes and insurance policies (I am a practical kind of person). Personally, I most appreciated some of the early pieces by Mario Buccellati, like the very delicate 1930s necklace of jointed yellow gold and platinum-plated silver elements hosting 80 rose-cut diamonds and 16 blue sapphires. I also swoon over some of the cocktail rings, like a 2-carat cushion diamond by Gianmaria inspired by his father’s early works; I am convinced this would look quite lovely on me. 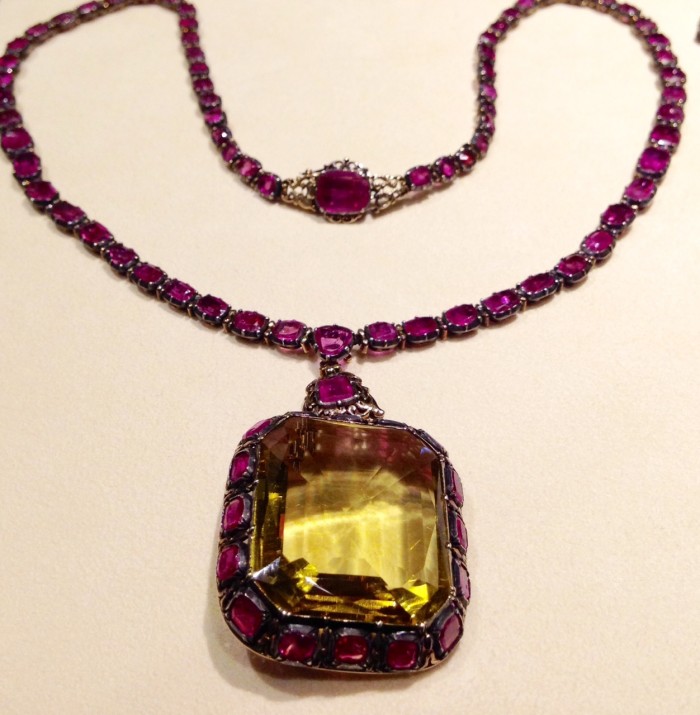 Also impressive are some incredibly light works by Gianmaria that imitate lace. A set of a necklace and bracelet made in 1992 host 946 and 448 diamonds respectively, while the earrings have 268 diamonds on them. The whole is supported on the lightest of white and yellow gold filigrane. Obviously, wearing the whole set together would be really over the top. 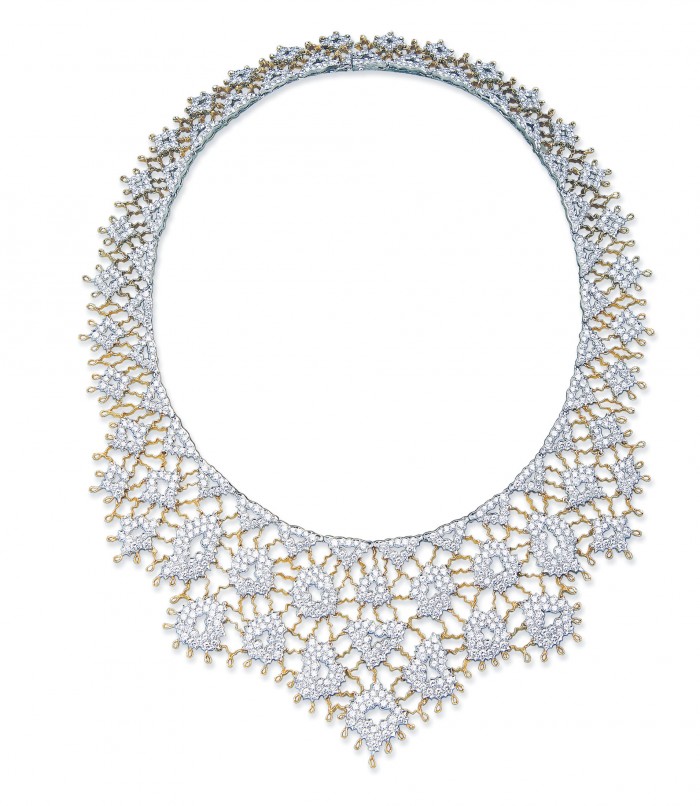 The Treasures of the Fondazione Buccellati is a show worth seeing to become familiar with the true heights of jewelry making of Italy’s past, and for the dream-value it can provide.