Christmas holidays 2010 in Florence – what to see and do 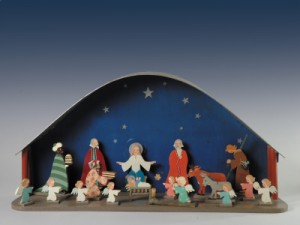 Upon the request of reader Linda, who found my list of things to do in November so useful, I’m putting together this post for December 2010, and in particular for over the winter holidays, in Florence and surrounding areas. To be honest, there is a little less going on event-wise in December, but there are plenty of exhibits open over this period, so if you’re spending Christmas in Florence – whether you’re a resident or a tourist – this list should help!

Almost all the major exhibits in Florence’s state museums are open until mid January, so if you haven’t had a chance to see Caravaggio at the Uffizi and Pitti (until Jan 9) or Bronzino at Palazzo Strozzi (closes Jan 23), I highly recommend those. Note that state museums are all closed on xmas and new years day.

A show dedicated to the Ghirlandaio family is an interesting way to convince you to visit Scandicci, and a not-too-expensive excuse to create an arts itinerary in Florence and its outskirts. 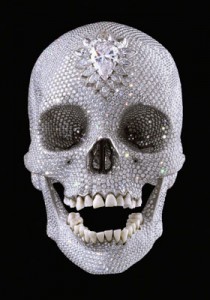 Billed as one of the coolest places to hang out in town, Palazzo Strozzi – other than the above-mentioned Bronzino – has two contemporary offerings right now. In the courtyard, step in to experience Michelangelo Pistoletto‘s square meter cube of infinity, literally a metal box with mirrors on every surface inside. Personally I get nauseous if I stay in it for more than about thirty seconds at a time, but I still think it’s really cool. Pistoletto is one of Italy’s most famous contemporary artists and the major exponent of the arte povera movement.

Downstairs in the Strozzina is the exhibit Portraits and Power that I reviewed when it came out; it’s an interesting show that questions the way power is created and represented, and also pushes the limits of what might be considered “art”. Open til 11pm on Thursday nights (and free then too), this is a nice place to stop in during an evening out. Good to visit with friends with whom you can discuss what you see – and not too “impegnativo” (heavy) a show, easily digestible in an hour (with some aftertaste that lasts in your brain for a few days).

Over at the EX3 in Gavinana (Firenze Sud) area is a rather interesting show by Charles Avery, Onomatopoia Part I, which displays evidence gathered from an imaginary utopic island. A clever show, probably deeper than I can truly grasp, though in some cases execution and display could have been improved. This free gallery offers a bar and reading area with light lounge music in the rather comfy antechamber/front hall, but there is never anyone in it. Kinda a nice place to stop in for a little free art while parked under the excellent Coop next door…

And of course there’s the Damian Hirst For the Love of God diamond skull being shown in Francesco’s studiolo in Palazzo Vecchio (actually to be precise, it’s through the studiolo in a secret chamber that I’d never seen before). Palazzo Vecchio is open every night til Midnight (except thursdays), and is closed only Christmas day. Now there’s a better alternative to hanging out in a pub. 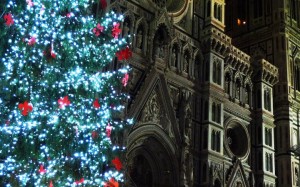 The “Heidelberger Weihnachtsmarkt” German-style Christmas market in Piazza Santa Croce is open until December 20th. In previous years there have been some very nice quality ornaments for sale but this year it looks pretty tacky. At night, if it’s not deadly cold (or even if it is), the piazza gets pleasantly crowded with people lining up to eat cheap wurstels and struedel – good if you’re tired of pasta, I guess. Mulled wine is also served to help with the cold.

There are Christmas trees all around Florence this year. The major tree is in Piazza Duomo for the first time – inaugurated December 8th. But there are smaller trees in Piazza Ss.ma Annunziata, all the way down via Roma, up at Piazzale Michelangelo, and even decorations in some of the city’s roundabouts further out towards the residential areas. The viali have very nice lights up on all the trees and downtown each street has different style lighting. They really do go all out. The Grinch in me says that’s a big expense and it consumes energy, but maybe that investment has a positive return in peoples’ spending on gifts.

The presepe is an Italian Christmas tradition that appears to have started in Naples (see the forthcoming article Christmas in Naples: presepe). Most churches have one of these manger scenes set up in a side chapel. There are various presepi viventi around Florence and Tuscany. And in Piazza Mino in Fiesole, in the spaces of the new city hall, until Jan 6th there’s a small exhibit of presepi from all over the world (free, open in the afternoon from 15-18).

On December 24th midnight mass is sung in the Duomo. If you want singing in the Duomo but don’t want to stay up late, on Holy days and feast days generally, at 5:15 Vespers is sung with Gregorian Chants (with thanks to arttrav reader Rosemary for this tip).

Florentines are terrible ice skaters so if you grew up anywhere that had a decent skating or hockey program, go rent skates and kick their asses for a few bucks at the Parterre near Piazza Liberta’ (until Feb 28, 6 euros for ice time and skate rental) or in the piazza in front of the Gavinana Coop (hey you can combine this with the EX3 above). The ice at the latter is not synthetic and is open til Jan 16. Both rinks are ridiculously small… says this Canadian reporter…