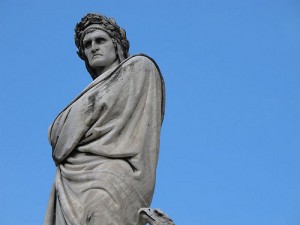 If you want to photograph Dante in Piazza Santa Croce, you are going to have to wait two months while the Carrara marble gets a good scrubbing (starting today). The 34,000 euro cleaning is financed as part of the celebrations for the 150th anniversary of Italy, which in Florence includes highlighting Risorgimento monuments such as this one. Extant restored elements will be checked and consolidated, the marble will be cleaned, and then receive a micro coating of protective wax.

The statue of Dante by Enrico Pazzi was inaugurated in 1865 on occasion of the poet’s 600th birthday. Originally he was placed at the center of the piazza, but after the flood of 1966 he was cleaned and relocated to the church steps in 1971. This choice was in part to accommodate calcio storico (historic soccer) which is played in this piazza in the end of June.