There’s a lot of talk online about the new room created to house Michelangelo’s Doni Tondo at the Uffizi. One room over from the small bland “Room formerly known as 35” that used to house this masterpiece is the new, red, brightly lit Room 35 that has been set up first and foremost to provide a larger viewing space for the painting, and second, to contextualize the piece with art by artists who were friends of Michelangelo or influenced by him.

Let’s look at the room and the works it now holds. I’m going to start out with a description of the new layout, and then proceed to list the works in the room, with an analysis of these works written in partnership with fellow blogger Hasan Niyazi. 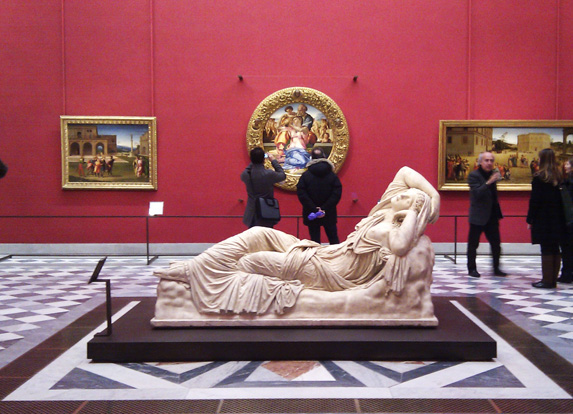 The decision to move the Doni Tondo to a larger room is a sane one, as anyone who has ever competed with crowds to see it in the old space will confirm. The old Room 35, just next door to the new one, was a shallow room with the entrance and exit doorways to the right. Crowds had to push in to the left and there wasn’t much space to see the Tondo from a distance, nor could the room accommodate more than one tour group at a time. Other paintings in the room were all but ignored. And the visitor flow was terrible as you had to go out on the same side as you came in.

The new space chosen to house the Doni Tondo is a large, independent room right next door, which in the 17th century was where the nucleus of the self-portrait collection was housed, and more recently held Barocci’s Madonna del Popolo and other counter-reformation works. A large double door permits visitors to enter and exit, while the room, with marble flooring and natural lighting, provides a natural visitor flow around the large piece of Roman statuary in its center. 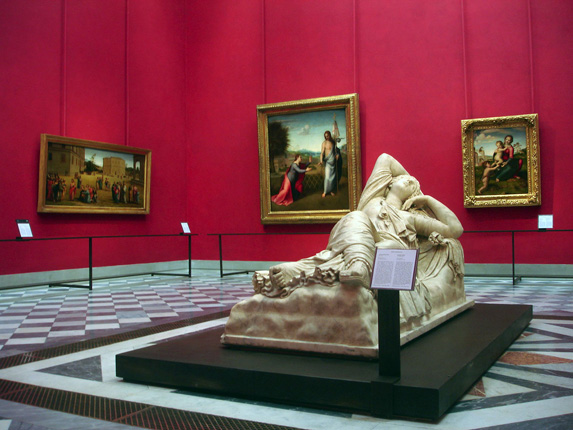 Another view of the room, photo: stamptoscana

This statue of Ariadne, on permanent loan from the Archaeological Museum, and the red walls are the most striking and innovative elements in the room. I asked the museum’s architect, Antonio Godoli, about the choice of colour – was it intended to match the reds in some of these specific paintings? He joked: “Well, of course it’s very studied – you can’t change the paint on the wall of the Uffizi every few years, on a whim!” “These are the colours of museum walls,” he continued. He refers to the blue rooms on the lower level, that he designed and opened last year, and the red of the Tribune, the same tone used here. Although the Uffizi Gallery has always had white walls, unlike the Pitti Palace, which in later centuries was decked out with damask and velvet fabrics in rich colours, the red and blue walls here are in line with the tastes of the Dukes, who might well have chosen the most expensive pigments to decorate their walls. Furthermore, the colours are in line with those used in other international museums, although Godoli says, with some regret, that the more neutral tones employed in some of the rooms at London’s National Gallery simply would not be appropriate here. He also encourages us to visit in the evening, as he says the lighting is dramatic and the red looks even better then.

The preparation of this room and moving the works cost 130.000 euro and was entirely financed by American charity, Friends of the Uffizi (and its Italian sister organization Amici degli Uffizi). You can see a video of restorers moving the Doni Tondo at night.

Take a look around with this short video I shot during the press preview of the room.

The following are the works now in Room 35. To better explain what each has to do with Michelangelo, I have asked fellow blogger Hasan Niyazi to place them in context. He is an expert on Raphael and so is familiar with a number of the subjects represented here, about which I know very little. If you don’t already, you should read his blog 3 Pipe Problem.

Hasan’s contributions are indicated by a shaded box (like this).

Please note that while we have done our best to make sense of conflicting and incorrect material online listing the entire contents of this room, this list may still contain errors. We have both scratched our heads trying to figure out what all of these works have to do with the Doni Tondo, or how the various artists are connected. Hasan has done an incredible job pulling out some rather tenuous relationships between them. Which leads one to ask how likely it is that the average viewer will ever come up with this kind of understanding, which seems to be intended, but not explicated, by the curators of the Uffizi. 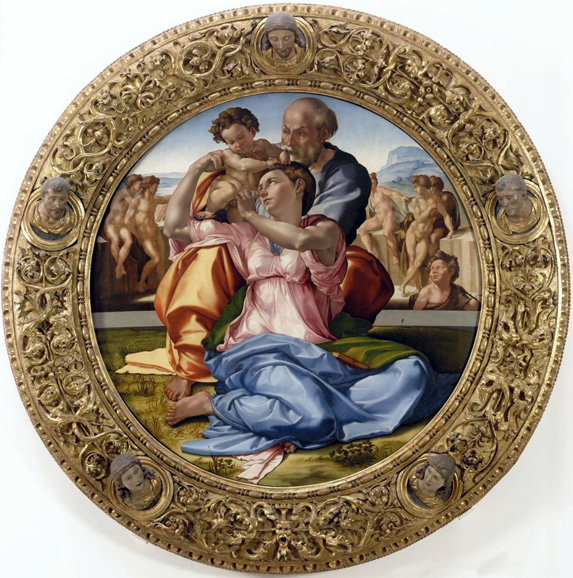 Commissioned by the merchant Agnolo Doni (either for his wedding to Maddalena Strozzi or for the birth of their first child), it is the only certain painting by Michelangelo. It entered into the Medici collections in 1594 at the death of the last member of the Doni family. In the 17th century, it was located in the Tribune, on the wall facing the entrance. This is interesting if one considers that the red chosen for the walls is the same as that of the Tribune; probably this historic location is thus directly correlated to the modern paint choice.

Rather a lot could be said both about this work’s iconography and its stylistic influence on all subsequent art, which would be a whole other article. 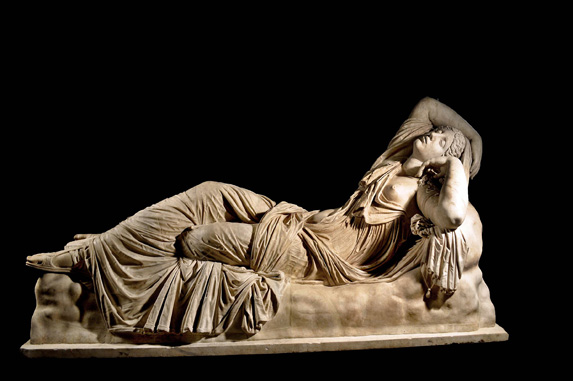 It is believed that Michelangelo admired this work of Roman art, a copy of a Greek Hellenistic sculpture, which was discovered in Rome during his lifetime. The figure’s hefty arms may be reflected in the raised arm of the Madonna in the Tondo. See the photo below for comparison.

On account of the snake armlet around its left arm, the “Sleeping Ariadne” was referred to as a “Dying Cleopatra” by early writers. A version was owned by Pope Julius II, purchased for the Belvedere fountain in Rome in 1512 –  and is now in the Vatican Museum. Some authors note Ariadne’s pose may have influenced Michelangelo in his later fresco “The Conversion of St Paul” (1542-5). It is however,  difficult to find any known version of the Ariadne statue as a source for the posture of the Virgin’s arm in the “Doni Tondo” The Ariadne now in the Uffizi can be traced back as far as 1572, and later became part of the Medici collection in Rome. It was removed from Rome in 1787, and until recently was located at the Villa Corsini,  outside Florence. 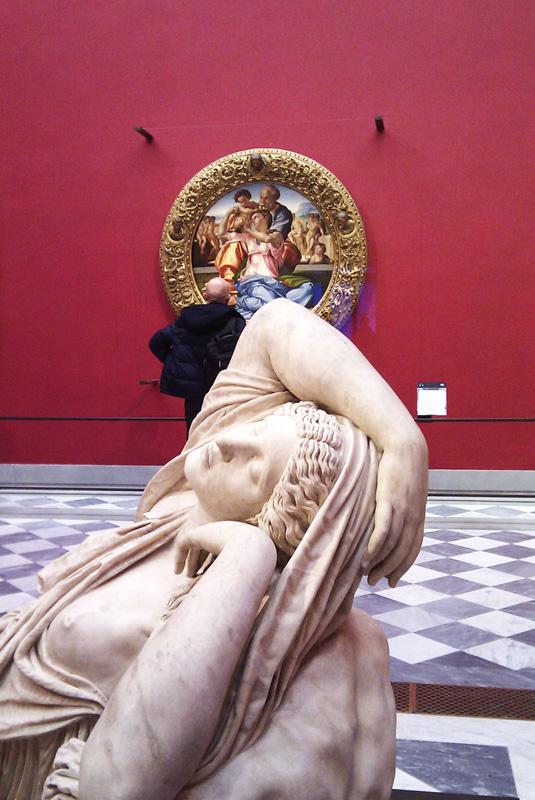 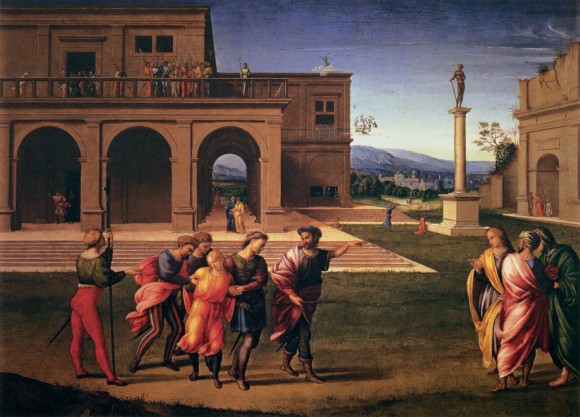 Joseph Presents His Father and Brothers to the Pharaoh

Born in Volterra, Francesco Granacci is described by Vasari as a lifelong friend and confidant of Michelangelo. Both were exposed to the arts in Lorenzo the Magnficent’s sculpture garden, and trained in Domenico Ghirlandaio’s workshop.  Granacci was later to assist Michelangelo during the early stages of his work on the Sistine ceiling. The scenes from the story of Joseph (Book of Genesis) are related – again, by Vasari – as being painted on the “head board of a couch” for Pier Francesco Borgherini for his palazzo on the Borgo SS. Apostoli in Florence, now known as the Palazzo-Borgherini-Roselli del Turco.

Right side of room (if facing the Doni Tondo): works from the Scuola dell’Annunziata 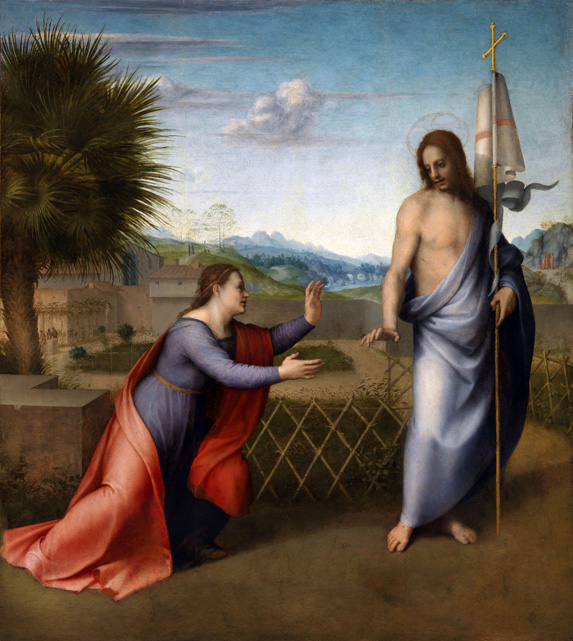 Why is this work here? Perhaps it is because Andrea del Sarto worked with Franciabigio (see below) for a short time; or because he had works in the Palazzo Borgherini in the same room as the Granacci “Josephs,” according to Vasari. 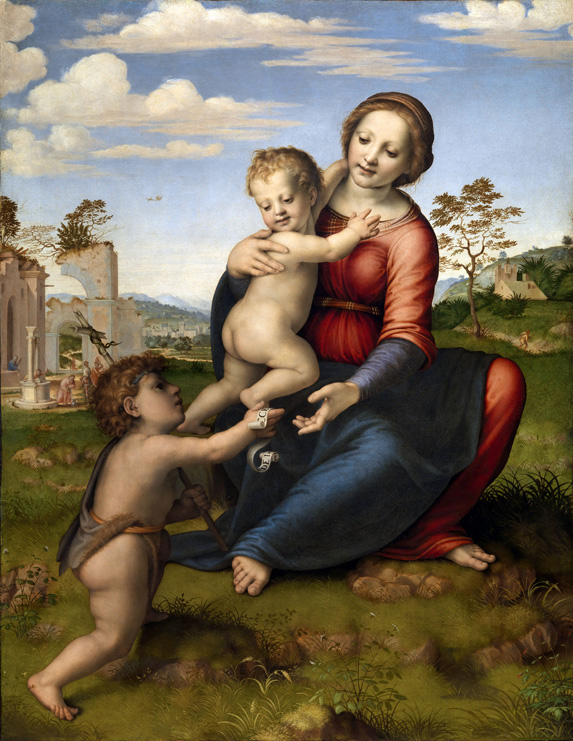 6) “Madonna and Child with St. John the Baptist and St Job,” by Franciabigio (early 16th century). 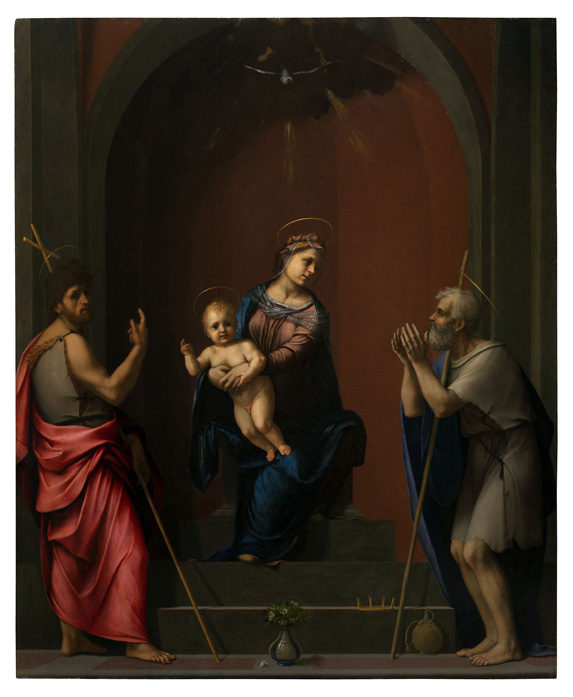 Franciabigio, Madonna and Child with saints

Franciabigio worked with Albertinelli and later had a brief partnership with Andrea del Sarto. He traveled to Rome around 1511, his later works displaying the influence of  Raphael’s Roman manner in composition and color. He is now mostly noted by scholars for his distinctive, naturalistic portraits.

Left side of room (if facing the Doni Tondo): works from Scuola di San Marco:

7) “Mother and Child,” by Giuliano Bugiardini 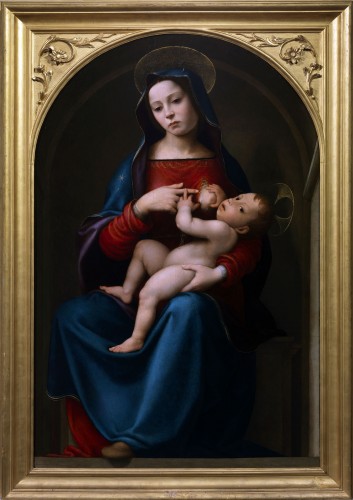 Giuliano Bugiardini also spent his formative years in the sculpture garden of Lorenzo de’ Medici, and was among the group of painters that assisted Michelangelo in the early period of the Sistine frescoes. 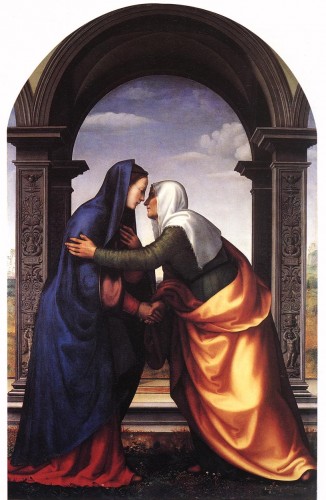 Mariotto Albertinelli is recorded by Vasari as the “compagno” of Baccio della Porta (later known as Fra Bartolommeo). They met in the workshop of Cosimo Roselli, and later worked from the shop located in della Porta’s home, near the San Pier Gattolini Gate. Albertinelli was influenced by Raphael and later trained Bugiardini (see below) and Franciabigio . The “Visitation” is considered to be his Albertinelli’s greatest work.

There are three small predella panels below the “Visitation” – depicting the Annunciation, Nativity and Presentation in the Temple 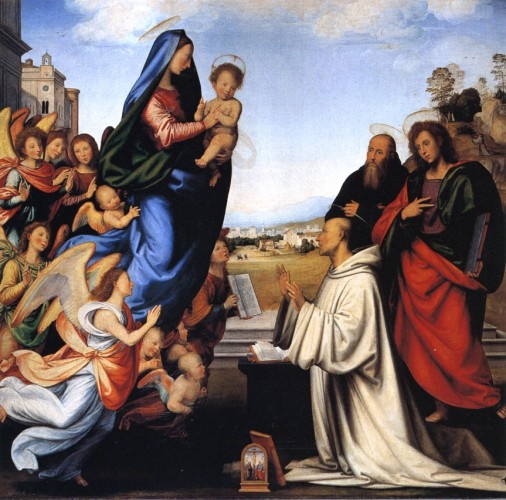 Fra Bartolommeo’s “Vision of St. Bernard” is arguably his finest work, commissioned for a chapel in the Badia in Florence in 1504. It is a pleasing addition to the new Michelangelo room, reflecting the great innovation of Florentine artists during this period. Like the Doni Tondo, Bartolommeo’s “Vision” had a tremendous impact on the young Raphael, working intermittently in Florence before 1508.  The combined influence of both these works on Raphael culminates in the altarpiece created for Sigismondo dei Conti for the Franciscan Church of Santa Maria in Araceoli, now known as the “Madonna di Foligno”, and one of the signature Raphael works in the Pinacoteca Vaticana in Rome. Also in Florence (at the Galleria Palatina), the pose of Raphael’s “Madonna del Granduca” was derived from Fra Bartolommeo’s unique work. Writing in 2011, Professor Alexander Nagel describes how the “Vision of St Bernard” allowed Raphael to infuse the modern, naturalistic style into the ancient tradition of icon painting:  “It is not just that Raphael begins with a modern source and pares it down. It is as if he recognized in Fra Bartolommeo’s visionary “proposal” a path back to archaic models of the image, and specifically to the format of icon painting.” In essence, Fra Bartolommeo’s use of colour and dynamic positioning of figures had a dramatic effect on Raphael, whose innovations resonated in Western art for centuries.

An allusion to Portia of Cato, the second wife of Brutus, one of Julius Caesar’s assassins. Scholars believe this to be a pendant painting to the “Minerva” at the Louvre. 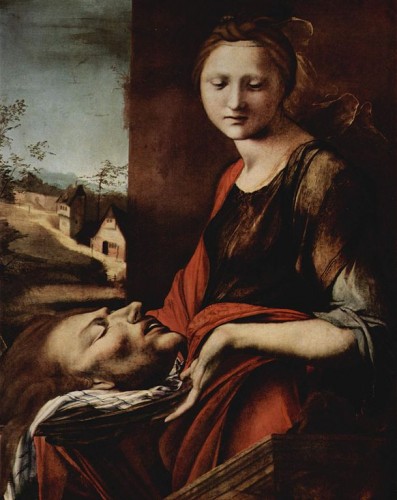 Berruguete, Salome with the head of St. John 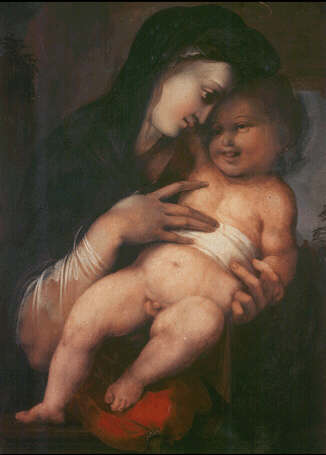 This Spanish painter, sculptor and architect studied sculpture under Michelangelo.

Fra Bartolommeo, Annunciation (grisaille scene on front) / Circumcision & Nativity on back, circa 1500 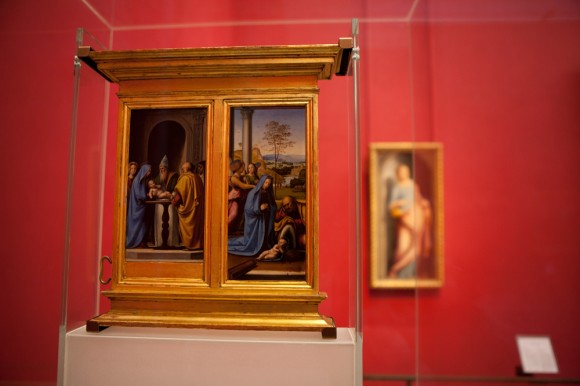 A little gem in a glass box to finish off our visit. The grisaille scene of the Nativity on what is presumably the front of the work (based on narrative sequence) and the two scenes on its back are divided by a frame with somewhat odd ‘stepped’ inserts that lead me to believe that the frame is not at all original and that some parts of the painting have been lost over time. (See another photo here)

Friends of the Uffizi, Press material

Langdon, G. Medici Women: Portraits of Power, Love, and Betrayal from the Court of Duke Cosimo I. University of Toronto Press. 2006. p.129