I’ve never been a huge fan of ancient art and archaeology, which is one of the reasons why I have rarely visited the Archaeological Museum in Florence. Another reason is that this museum contains some world class sculptures, but very little information about them. So I jumped at the opportunity for a private tour of the museum with one of its guards, Marina Lo Blundo, who is behind the museum’s blog, Twitter and Facebook channels, including a Twitter in the voice of the museum’s most famous sculpture, the Bronze Chimera. Marina pointed out the museum’s most important pieces and told me a bit about each so that I could write this post, which might be used as a rare English guide to the museum (there are no labels in English, and few in Italian). In the order in which you’ll see them in the museum, here are nine sculptures for which it is worth entering this museum. 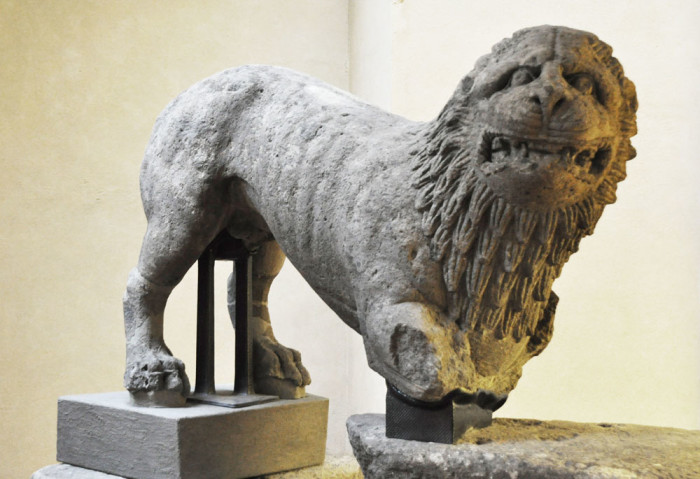 Not much is really known about this lion, but museum staff enjoy joking that he is the boyfriend of the more famous Chimera. 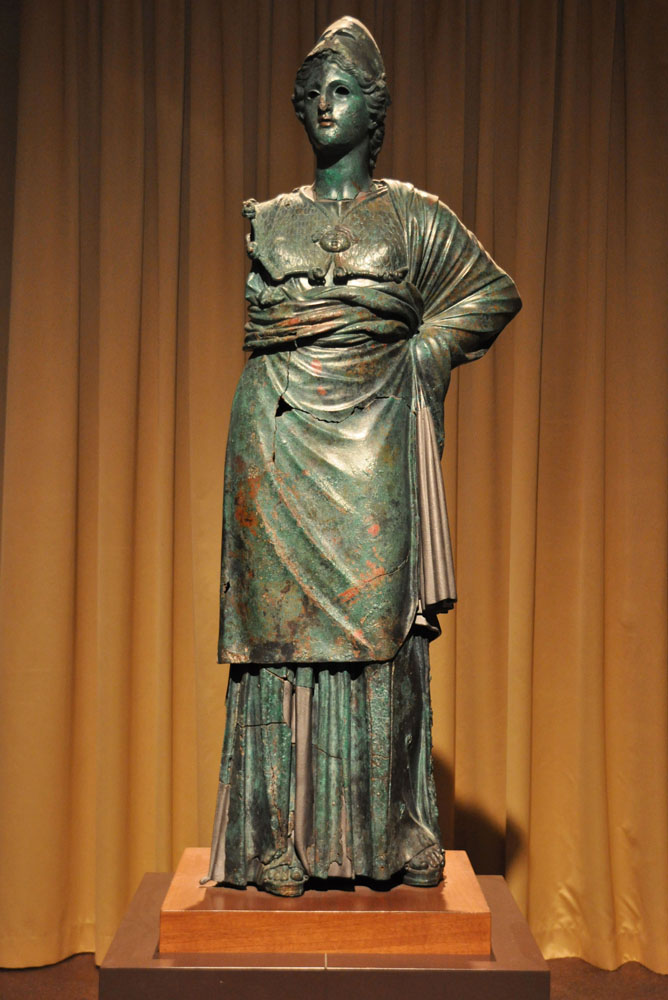 This likely Roman copy of a Greek Hellenistic bronze (after the school of Praxiteles) was discovered in Arezzo during the Renaissance (1541). She represents the Greek god of Athena, Minerva to the Romans, goddess of wisdom. For this reason, Cosimo I, Duke of Tuscany, felt a strong affinity to it (thinking himself particularly wise) and thus appropriated it as soon as it came out of the ground.

Its head and arm were detached, and he had the head attached to the body during his lifetime. The arm remained a bit of a problem as artists were unsure what angle it should have, but, in 1785, the bronze artist Francesco Carradori set the arm in the gesture of an orator, and integrated the sculpture in order for it to be displayed at the Uffizi. Twenty years ago, restorers had second thoughts about the late 17th-century pose of the arm, but remained unsure of how it should be installed. The statue has been beautifully integrated by removable modern pieces (attached with magnets) and the problematic arm has been left out so as to present the closest possible hypothesis of what the work was supposed to look like. The Carradori interpretation is preserved in a recent copy displayed in the same room. 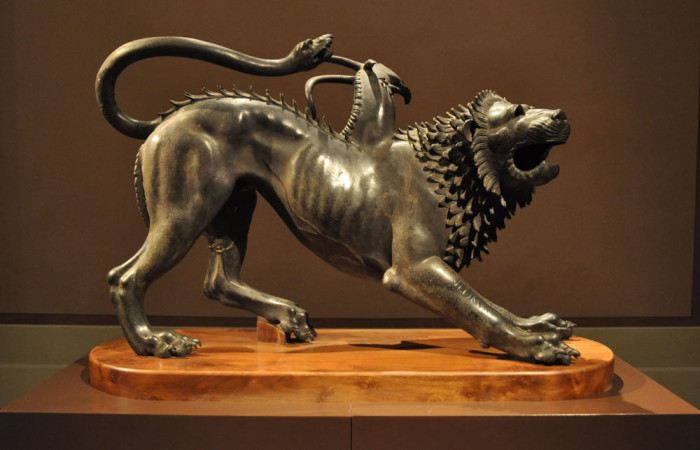 This bronze is number one in the museum’s inventory! The 4th century BCE Etruscan bronze was discovered in Arezzo during work for the city’s walls on November 15, 1553, and immediately requisitioned by Cosimo I, at which point it was brought to Florence. He considered the monster an allegory of the forces against the Medici, and in general was a big fan of appropriating Etruscan art to support a historic claim on Tuscan territory.

A chimera is a three-headed mythical beast, part lion, part goat and part snake. Like the Minerva, the Chimera was not discovered all in one piece, but was somewhat reconstructed. The serpent remained unattached until the late seventeenth century when the previously mentioned Francesco Carradori, or perhaps his teacher Innocenzo Spinazzi, integrated the animal and came up with the invention of it closing the composition by biting the goat’s horns. This position is unlikely to be the original one. 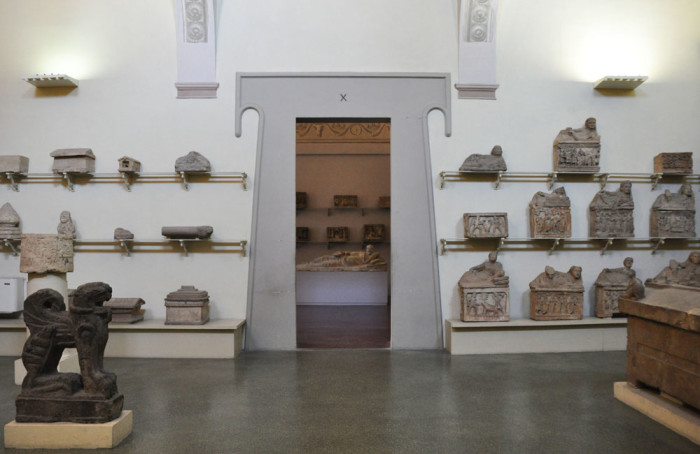 At the center of one of two large rooms of small funerary urns is a rather heavy sculpted sarcophagus lid representing a very fat, rich man. The “obesus” is a caricature of the obese Etruscan mentioned in Virgil, yet this man chose to have himself depicted as such – a status symbol – on his own sarcophagus. His healthy tummy shows he was well fed, and he wears expensive jewelry and garlands too. 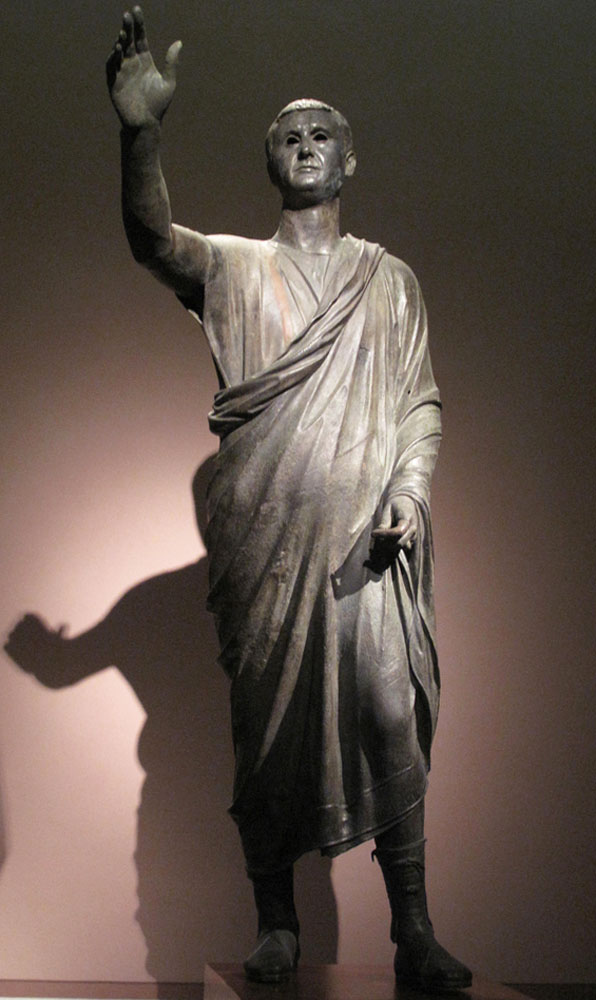 Although he was on loan to a show in Cortona when I visited, the Arringatore must be included in this list of don’t miss sculptures! Found in the Cinquecento around Perugia or perhaps Lago Trasimeno (sources are unclear), this late Etruscan bronze represents an important orator named Aule Meteli (taken from an inscription on his toga) quieting the crowd before his speech. His raised hand says “hey guys, shhhh!”. In preparation for its move to Cortona, staff and restorers got a closer look at the work, observing the remains of red colouring on the toga, unusual for a bronze. 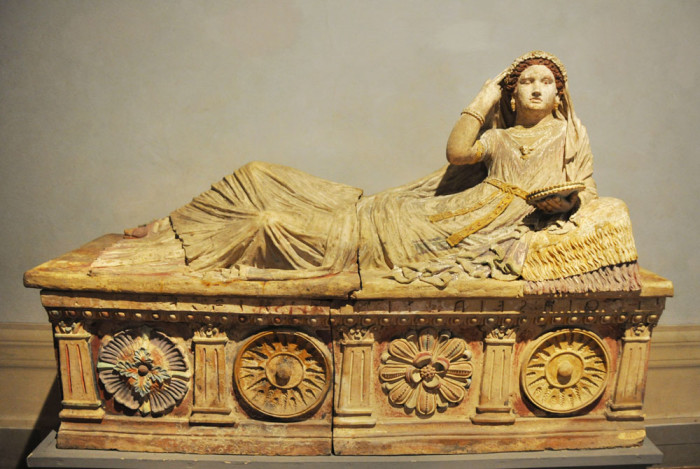 This delicate terractota sarcophagus representing a woman whose name we can identify as Larthia Seianti (from an inscription on its side) dates from the second century BCE. This lovely lady, who holds a mirror, wears super designer sandals and makeup, could be the wife of the Obesus (in another century) in that she is clearly well off.

7) The sarcophagus of the Amazons 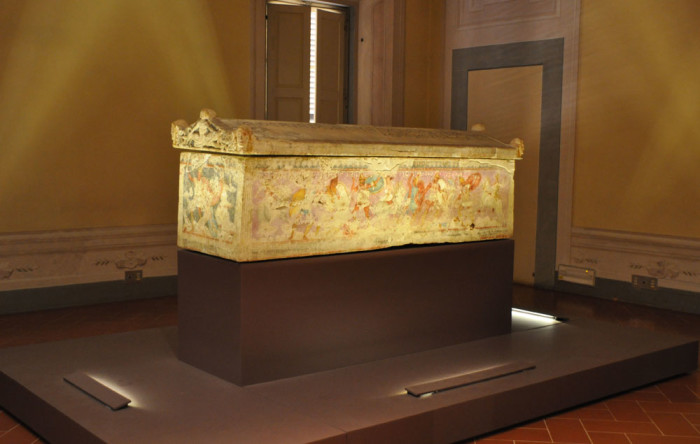 This piece found in Tarquinia combines marble, probably sculpted by an artist from Taranto (Puglia), with a simil-fresco painting technique. The Battle of the Amazons is represented on it. Here we see a mastery of materials and get a sense of the colours that were common, but now mostly lost, in Etruscan art. 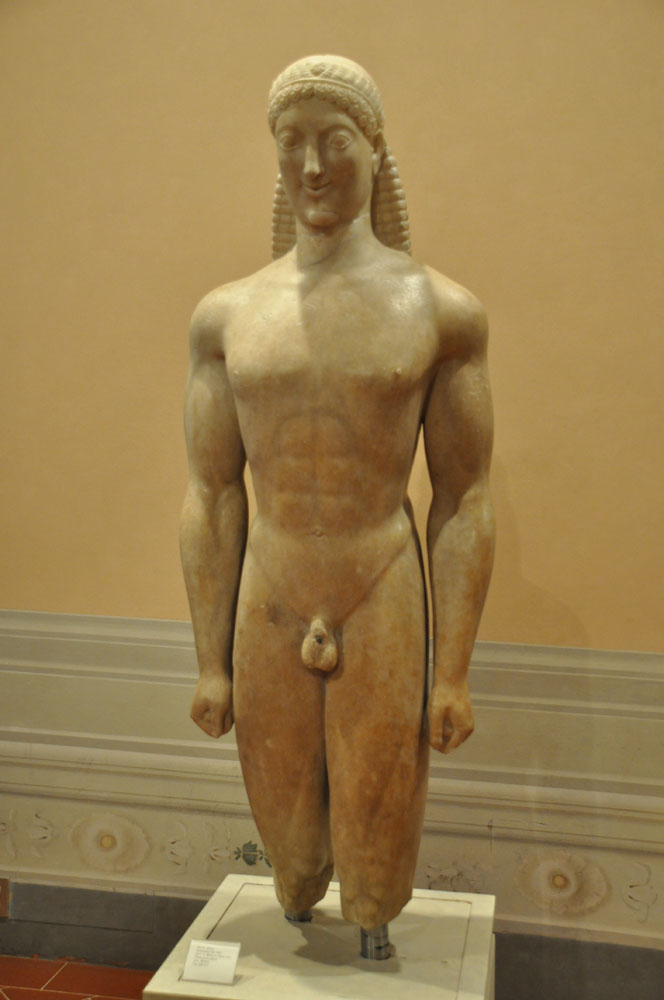 This lovely archaic Greek figure was purchased by Milani, director of the museum in 1902. It’s called an Apollo because at the time it was thought that all “kouros” figures represented this god, but actually they are just young donors. This and other kouroi are amongst the first large scale sculptures of the human figure that show an understanding of anatomy. 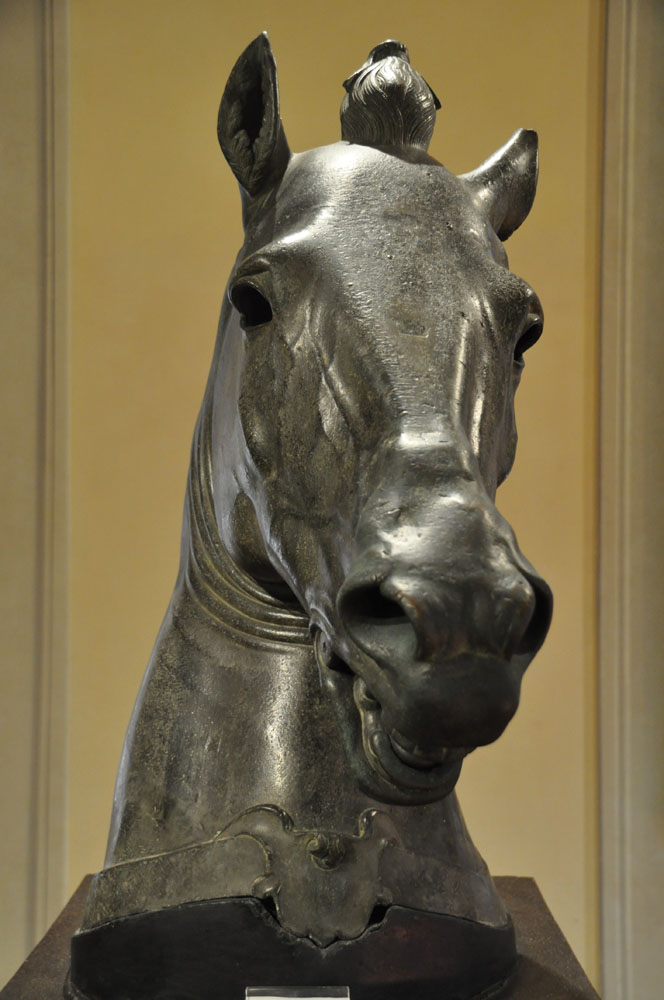 This is the detached head of a full scale Greek equestrian sculpture in bronze from the second half of the 4th century BCE. It was already recorded in 1494 as part of the collections in the Medici palace gardens, and it was later housed at the Palazzo Vecchio. It was well known in the Renaissance and most certainly inspired the artist Donatello, who made at least two important equestrian sculptures in his lifetime. The monumental horse head by Donatello known as the Protome Carafa, preserved in Naples and recently shown at Palazzo Strozzi, shows clear resemblance to the antique model, and during the Renaissance it was passed off as Roman.

This post is part of the monthly Artsmart Roundtable and our challenge this month is sculpture. I enjoy reading the articles by my arts blogging colleagues who write about topics often far removed from my own Italian experience. You can see their posts here: