This podcast (9 minutes long) takes you on a tour of Piazza Duomo in Florence, Italy. We talk about the mix of religious and civic buildings in this space, looking at the Baptistery, Duomo, Misericordia, and Bigallo. The article below contains the text of the podcast.

Here is the text of the podcast or you can Download the pdf text here. 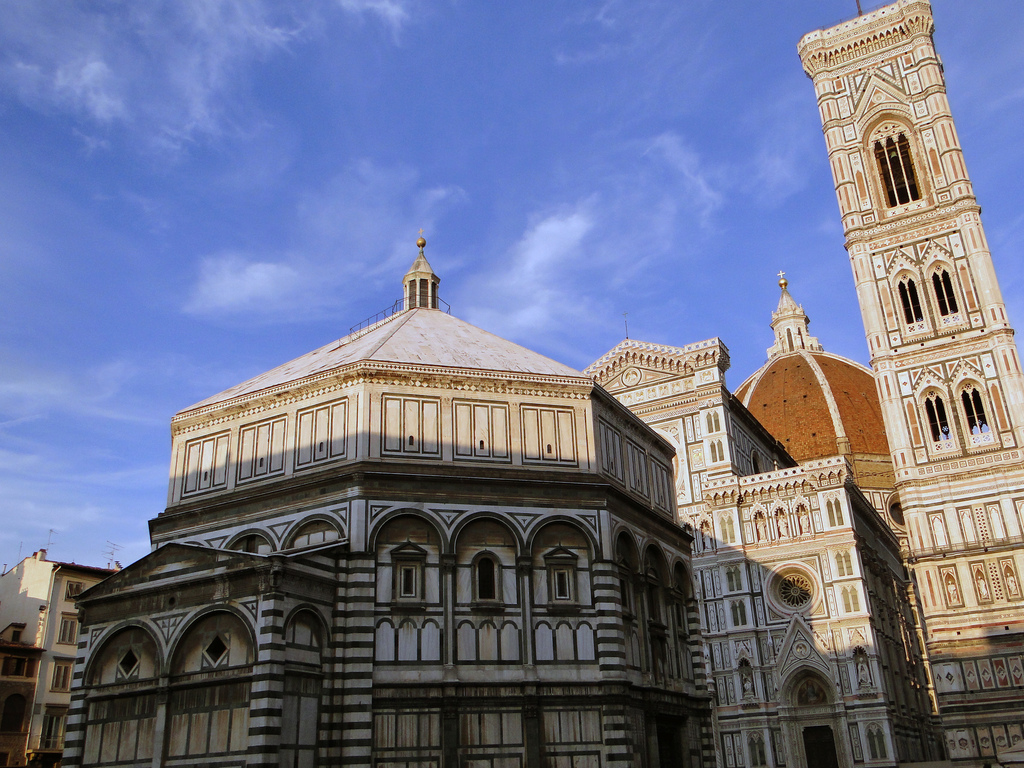 Piazza Duomo from behind the Baptistery

This podcast takes place in Piazza del Duomo in Florence. You’ll learn things I bet you didn’t know about this piazza, as we take a look at it from a contemporary viewpoint and add a civic twist to what is an essential religious space.

Florence of the late middle ages and the Renaissance was a profoundly religious city. It was also in an economic boom – especially in the late 13th century when most of these buildings were begun. Religion and business are BOTH what made this city move, and they are not at all mutually exclusive.

This aspect of the city is visible in piazza del Duomo – more rightly called piazza di santa maria del fiore – the city’s religious heart. Besides the main religious structures of the cathedral and baptistry, as well as the belltower that helps complete this “cathedral complex”, are the bigallo and the misericordia, buildings with a civic context, as well as rather more lay imagery and participation than the modern viewer normally expects in a space like this. We’ll work through this space together in order to point out the civic aspects in this religious space. This means we won’t have time to discuss the decoration of the duomo and baptistry in detail.

This podcast can be listened to from any point in piazza duomo, though you may want to wander closer to each space as I discuss it, and stop the file if you want to look at something more closely. Use the diagram of the piazza above to orient yourself.

First off we need to remember that although Florence is famed for its Renaissance art, most of the important buildings went up starting in the 1290’s, a time still considered the Middle Ages. The predominant style at that time was Gothic. Italian Gothic architecture, of which the cathedral is in some ways an example, tends to have pointed arches, multi coloured marble (often white, pink and green) and rather fussy detail. Renaissance architecture on the other hand is known for its roundedarches and seemingly simple arrangement of forms, which (and this is essential) derive from Antique Roman examples.

The oldest building in this piazza is the Baptistery. Its function is to baptize Christians, which is something that could just as well be done in a baptismal font inside the main church. Here it has been separated out from the cathedral to emphasize its importance. One reason for this is because Saint John the Baptist, whose church this is, is also the city’s patron saint. Baptism indicated acceptance into Christian society, but also into Florentine society – through this ritual, the Florentines kept track of the city’s birth rate. Already you’re starting to see how the civic and the religious get mixed together in this space. To add to this, I want to note that the Church did not pay for the building and decoration of the baptistry, but rather it was funded by the silk guild, or association of silk workers.

As for the building itself, legend has it that it was an ancient temple dedicated to Mars. While this is not true, in the Renaissance they believed it to be so. Why is this important? Because the baptistry was actually built in the 11th century, in a style that recalls some Roman buildings. This style, called Romanesque, is not real Roman. Renaissance artists like Brunelleschi, famous for the cathedral’s dome amongst other things, were profoundly influenced by the architectural style of this baptistry. Brunelleschi was consciously imitating Roman art, and since he thought the Baptistry was Roman, he copied parts of it too.

Next to the Baptistery is something few people notice: a column dedicated to Saint Zenobius that commemmorates a miracle that happened, perhaps, in the fifth century. Read more about that here.

The next big thing they built here was the Cathedral itself. In Italian cathedral is “Duomo”, and this means Domus Dei, or seat of God. This is where the Bishop presides, and there can only be ONE cathedral or Duomo in any given city. It is the most important church in the city; the Bishop also lived nearby, in the bishop’s palace, which is on the other side of the piazza, behind the Baptistry.

The Duomo was begun in the 1290’s. It is so huge – almost as wide as an American football field – that nobody really expected to see it finished in his or her lifetime. It took about 150 years to build from the first stone to the top of the dome. And the façade remained unfinished for centuries! Although it may look gothic, it is actually NEOgothic, and it was done in 1887. To start a project like this shows tremendous faith both in the city and in God. Although it is clearly a religious space, the cathedral also becomes the symbol of the city. 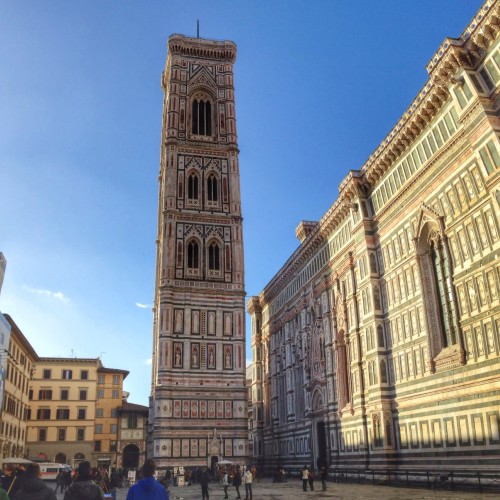 The belltower, called campanile in Italian, was designed by the artist Giotto, better known for his paintings, in 1334. Its bell calls people to prayer. The sculptural decoration on the sides of this structure had two parts: one of standing prophets, and then a series of relief sculptures in hexagons. Most of what you see outside now is copies, the originals are in the Museum of the Duomo works which is behind the cathedral. The hexagons are what interest us right now, because aside from a few genesis scenes, these show various crafts or disciplines represented by someone doing a task. These include the architecte and the builder, for example. The hexagons demonstrate how important crafts were to the city’s economy. The Florentines saw nothing odd about putting this imagery on a building in the religious center of the city.

Now on to a few buildings you may not have noticed, since we’re often distracted by the big, flashy ones. I want to note two confraternity structures in this piazza. Confraternities are voluntary associations of lay – that’s non-religious – men, who get together to do good works. You’ll want to go to the corner across from the belltower. The loggia of the Bigallo is an open space with two bays attached to a building from the 1350’s. The Bigallo was a confraternity who administered a hospital outside of town. One of their roles was to take in orphans. The open space (or “loggia”) of this building was used to display the orphans in the hopes that they would be recognized and taken in by family members. I’ve written the whole history of the Bigallo, its social function and art, in this article on The Florentine.

Just across the way, you probably see a number of ambulances parked there. No, they are not there to rescue you as you die from exposure listening to a podcast about piazza duomo. That’s the home of the Misericordia, the city’s ambulance company. The Misericordia is one of the oldest confraternities of the city, started in 1244. Members are the ambulance drivers, staff and doctors who volunteer their time in this act of charity. Sometimes they can be seen wearing a white robe with a hood. Usually they keep the hood hanging down their backs, but when up, they look a lot like KKK members, with pointed tops and cut out eyes. The purpose of these outfits, worn not only by the Misericordia but also by other confraternities, was to anonymize the members, whose good deeds, it was believed, should be known only to God.

As such, we have seen that this piazza is the religious heart of the city of Florence – where people come to pray and to be baptized. But we also have seen that within this area there are non-religious structures, like these confraternities, and that non-religious entities are represented both financially and through imagery. Hence the piazza becomes not only a religious symbol, but representative of the entire city.