This post contains information about how/where to buy tickets to the Uffizi; special summer 2009 opening hours; a currently available card that gets you into Florence museums, and a proposed “city card”. 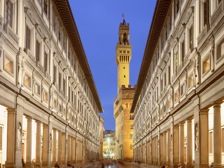 A city-wide museum card is much needed by Florence, especially as a way to encourage residents to revisit their own museums. This was part of the political platform proposed by mayoral candidate Matteo Renzi, and a point in the platform that I helped develop for city counsellor candidate Laura De Benedetto (who unfortunately did not win a seat). Museum cards make it possible to make shorter, repeated visits to museums without feeling prohibited by or guilty about the cost. I hope that the city will also offer babysitting services and special events to card holders.

1) In late breaking news: According to The Florentine, the city of Florence is finally developing a city card that would give access to the city’s municipal museums, which are NOT the state museums (museums like the Stibbert and Strozzi Palace are mentioned, though I imagine/hope this would also include the Palazzo Vecchio). Apparently the card should be ready for purchase by late 2009. Proposed costs seem reasonable – 20 euros for a 2 day tourist pass and 50 euros for a yearly resident pass.

2) In other related news… extended Uffizi opening hours for summer 2009: on Tuesday nights from July 1 thorugh till the end of September the museum will be open until 9pm.

NOTE: if you are planning a trip to the Uffizi, do not buy your tickets from online resellers that charge extra. Tickets to the Uffizi can be bought on their official site and should cost no more than 14 euros for the full price ticket during the summer (when special shows are on) and 10,50 euros at other times.

3) The Friends of the Uffizi membership card (Amici degli Uffizi) gives you unlimited access for one calendar year to the state museums of Florence (including the Uffizi and the Accademia). It costs only 100 euros for a family of four, and with this you can skip the lines! It’s a great deal for residents and tourists alike.

For now you can get into state museums and skip the line to the uffizi by purchasing a Amici degli Uffizi card which I really think is a great deal (and I don’t get anything in exchange for saying this). You can buy this on the spot when you arrive (museum hours, so closed monday) or order online if you have sufficient time to wait for the post. The museums included in this card are: