Do You Recognize These Florence Views by Mario Minarini?

A photo freezes a moment in time and place, conveniently storing our personal memories in some digital form. A painting… a painting does so much more than that. In representative art, it may capture a place and time, but that moment is longer, the memories both someone else’s, yet strangely, perhaps, also yours. That’s the feeling I get when looking at the beautiful Florence views captured by artist Mario Minarini.

The soft-spoken Florentine artist can be frequently seen painting “en plein air”, but you have to know where to look – he frequents some of the city’s unsung spots. His views around Tuscany, where he shares my love of Maremma, are equally charming. All of them have a sense of being frozen in time, like they could be from a hundred years ago or from last week; they capture the timeless beauty of Italy that we all appreciate. Perhaps that’s why it’s easy to identify ourselves in his mostly people-free images. Because we’ve been to these places, perhaps for a reflective walk, and they bring up shared memories.

I’ve asked Mario for the privilege of sharing some of his paintings of Florence here, and I challenge you to figure out from where, exactly, each was painted.

Before we turn to the “game”, though, a quick word on the artist himself. Born in Florence in 1970, he graduated from the Istituto d’Arte high school, specializing, not in painting, but in goldsmithing – aligning himself thus with the Renaissance Florentine tradition, in which some of the greats like Botticelli started in the same way. He studied painting at the Accademia, and then continued to develop his style in the G. Mazzon group. Appreciated early on, he was awarded the important Fiorino d’Argento by the City of Florence in 2008 and has had exhibitions in prestigious locations like Palazzo Medici Riccardi, the city of Fiesole, and most recently inside the government of Mexico. He has two shows coming up in Fall 2017 which I’ll list below.

Let’s take a closer look at Mario’s paintings, these impressions of places and their true souls, that express this artist’s love of his city. Alongside each, I’m writing a few words that are either from the artist, or from writers with whom he has collaborated, extracted from the 2014 catalogue “Mario Minarini. Firenze, guida ai luoghi dell’anima”. The list of locations is at the bottom of this post. 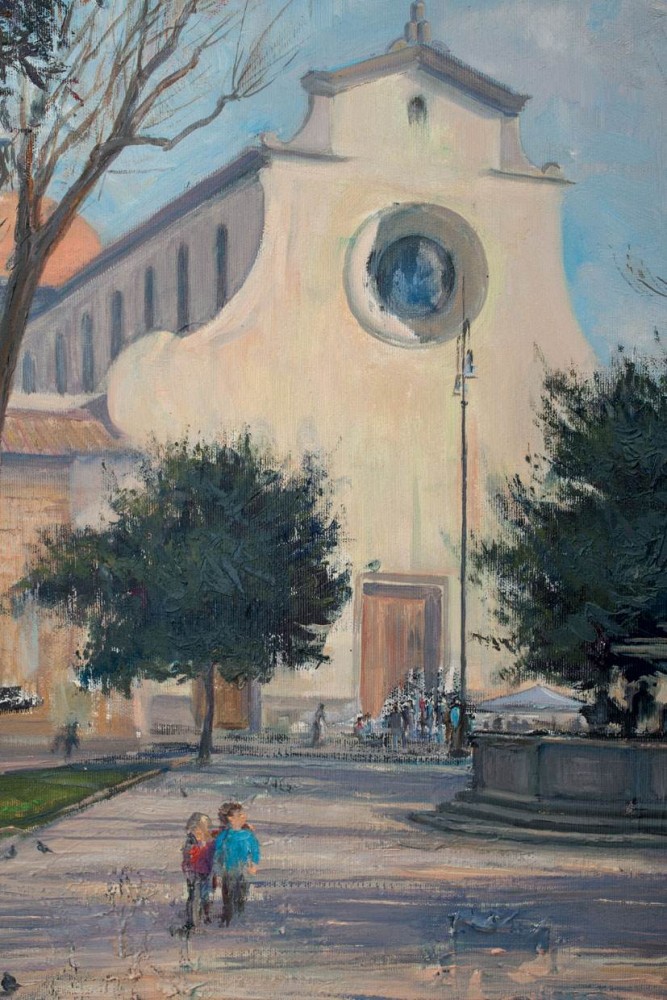 The favourite piazza of so many visitors to Florence due to its ability to remain timeless, “authentic”… 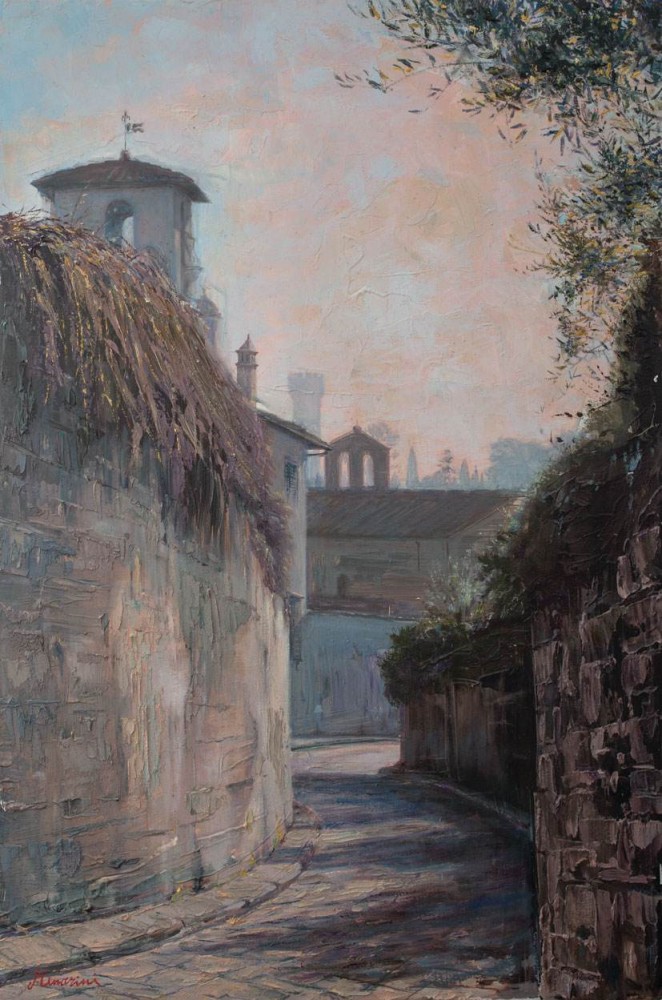 Quaint, narrow and cobblestoned, with high walls on either side delimiting property, you’re both inside and out of the city of Florence, perched above it on this street… 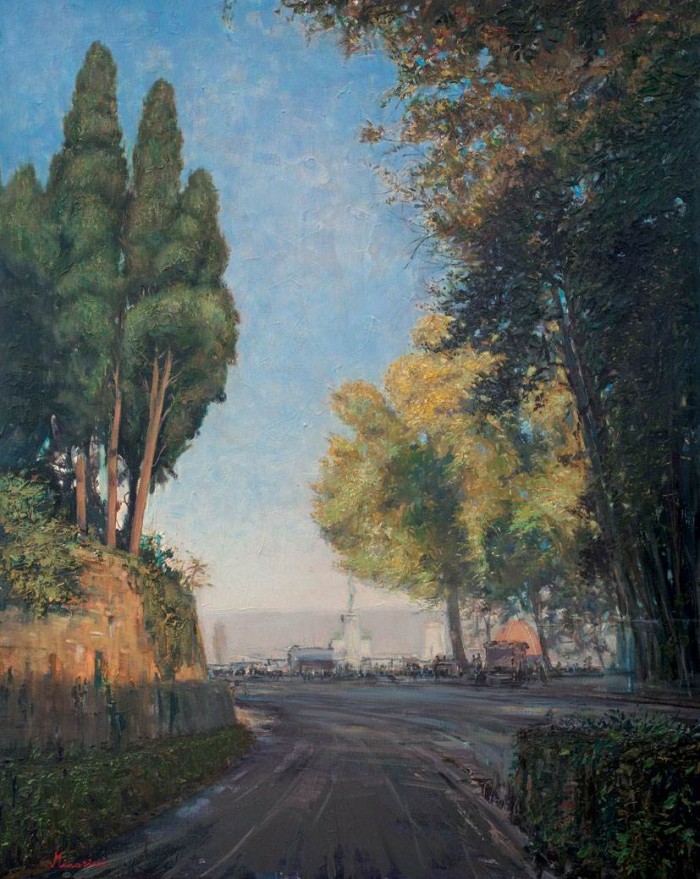 It’s possible to view what may be the most touristy piazza in Florence from a different angle… can you figure out from where, precisely, this was painted? 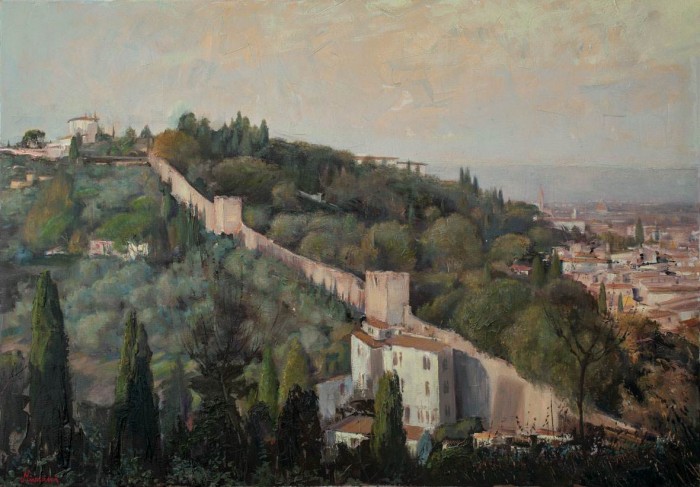 The walls of Florence represent a moment of the city’s past, before Poggi demolished them to create a Parisian-inspired landscape. Their destruction represented a moment of change, when Florence became the capital city, as indicated by the author Jarro in 1884, who predicted “a total change in the way of life, in which Florentines had to learn to live with people who did things differently”. 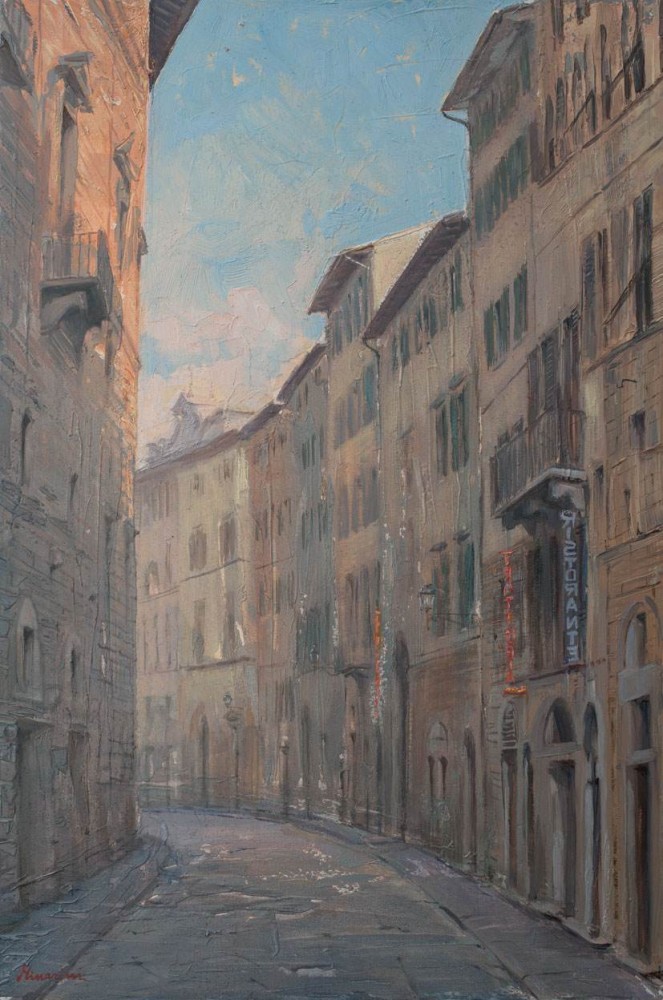 “A city that is complete in and of itself, with its art and buildings, animated yet not too crowded, capital but not too big, pretty and gay… this is the first impression of Florence,” writes Hippolyte Taine in 1866. This may have changed, but this street, devoid of activity in Mario’s painting, could almost have been painted at that moment in the middle of the 19th century. What street is it? 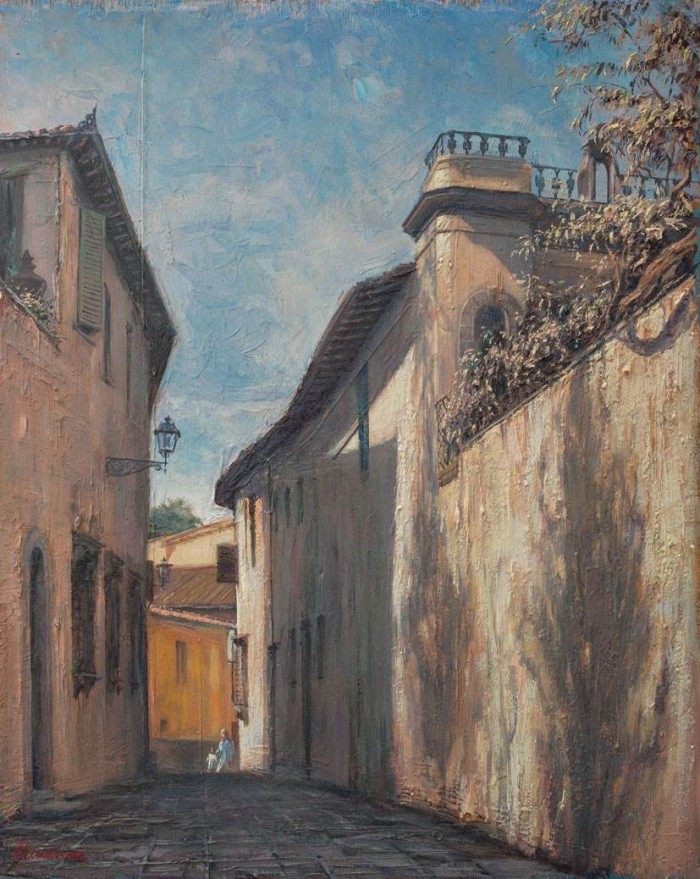 “The name of this street, ‘erta…’ means steep slope. In the past it was a shortcut from the Oltrarno to San Miniato and then on to Siena… The trip up on disconnected paving stones engraved into the earth without mortar reminds us of how, for a few hundred years, human and animal feet have trodden here.” — Lorenza Ciacci 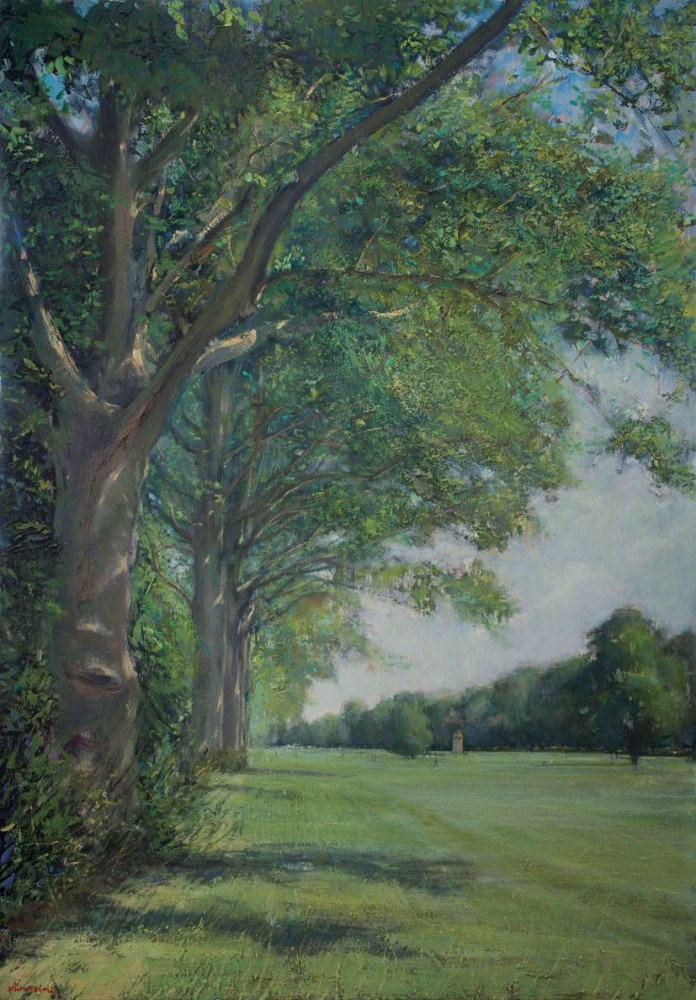 The rush of wind through the trees. The giggles of children, the young couple making out on a bench. The cyclists, the horses… you’ll find them all here in Florence’s largest green space. 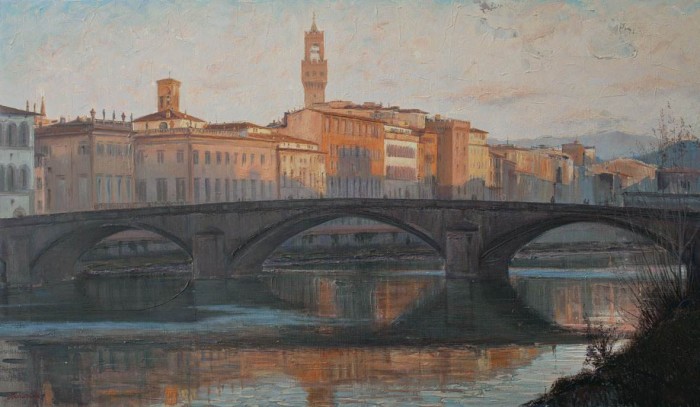 The Arno, lifeblood of the city, at times its destroyer. Here, we see it as it looked for hundreds of years, its banks untamed and lined with reeds. A view that is still possible to achieve… but from where? 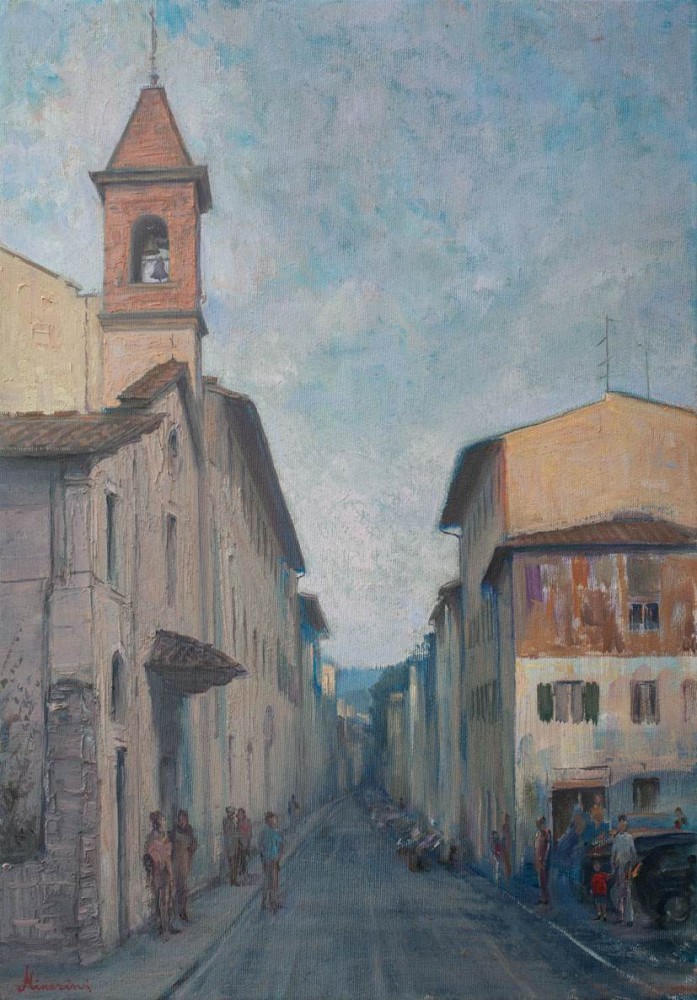 Near to where the artist frequented high school. Can you guess where this is? 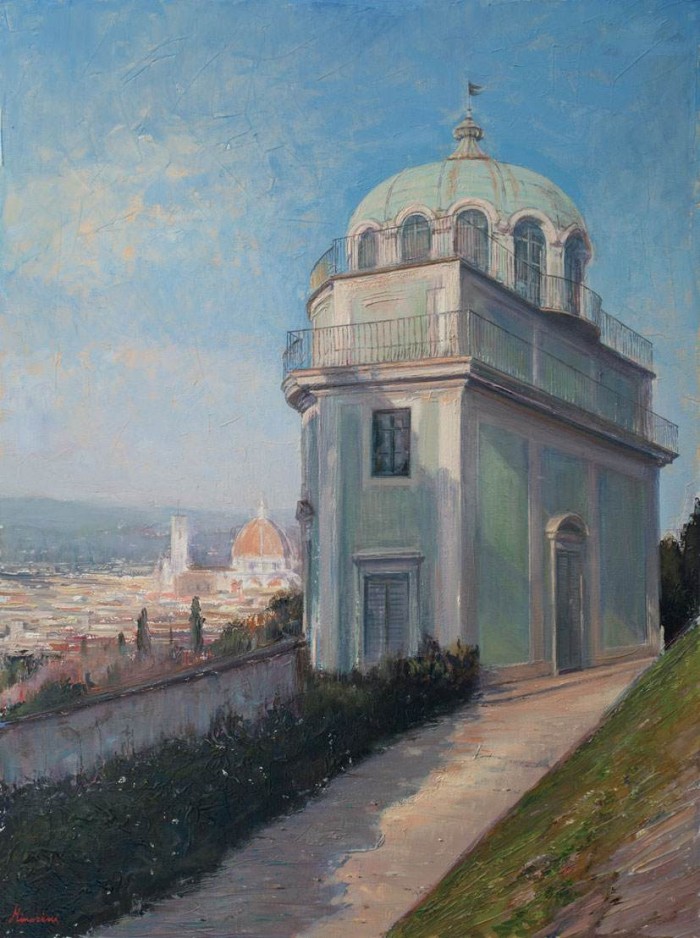 “This park represents the perfect balance between nature and artifice.” — Maura Chiavacci 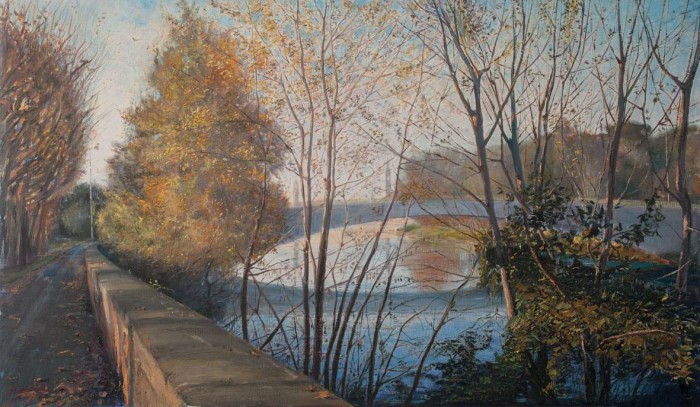 “Through the branches I see Florence. The old men here tell me that when they were kids they used to swim here in the Arno, just as nice as at the seaside. I think how nice it must have been in those times, and as a painter I imagine it like the Seine of the Impressionists, full of life and colour.” — Mario Minarini 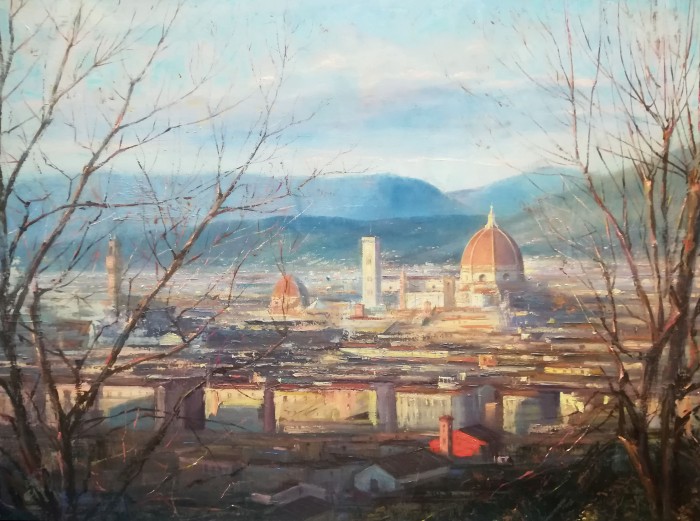 This one’s an easy one, and yet perhaps the most important. The Duomo, symbol of Florence, visible from miles around for the last few centuries. But from where in Florence was this view captured?

How many of Mario’s Florence views did you recognize?

If you enjoyed his work, consider seeing them in person (the works are also for sale). Here are two upcoming shows: