Irene: a tribute to the perfect Italian nonna

Florence is abuzz with the opening of a new restaurant with a feminine touch. Irene was the name of the grandmother of Sir Rocco Forte, whose empire of luxury hotels counts 10 in Italy and the rest of Europe, Florence’s Hotel Savoy amongst them. The restaurant in Piazza della Repubblica named for Grandma Irene is in fact part of the hotel, but wishes to be part of the urban fabric, not “a hotel restaurant”. And who wouldn’t want to take advantage of this: the beautifully styled space offers a new option for truly fine dining in the very center of the city.

Irene was from a modest family in the Veneto but she grew up in London, where her family owned a gastronomia. She was courted by a man named Charles Forte. He went into the shop on every occasion, but for the longest time, he was considered “not good enough” by her family. She stuck by him as he rose to fame and fortune and gained the title “Lord”, bearing one son and five daughters, cooking and keeping house in a way that is remembered by all. Her son, Sir Rocco, is now at the helm of the family’s business. 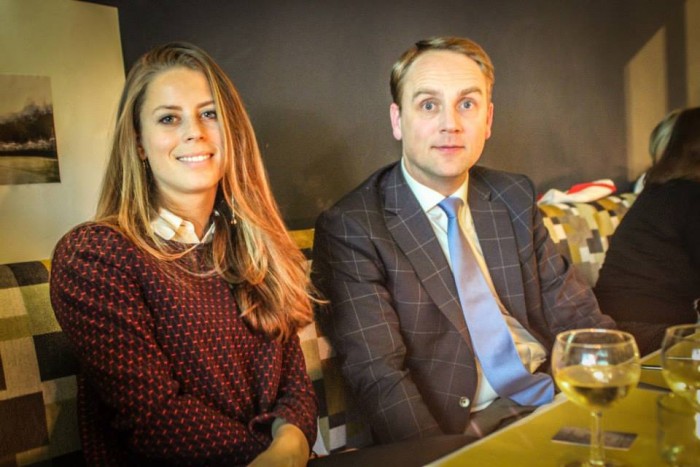 I spoke with Lydia Forte, the 28 year old heiress who works first in line with her father’s hotel restaurants as Development Manager, creating new concepts, communication and menus in tandem with the famous Italian chef Fulvio Pierangelini. “I have this memory of going over to Nonna Irene’s… she lived in this huge Georgian house [in London, where the family moved] where everything was always perfect,” she gushes when I asked her to tell me more about her grandmother.”I remember she’d hold these huge family dinner parties with an amazingly laid table.” 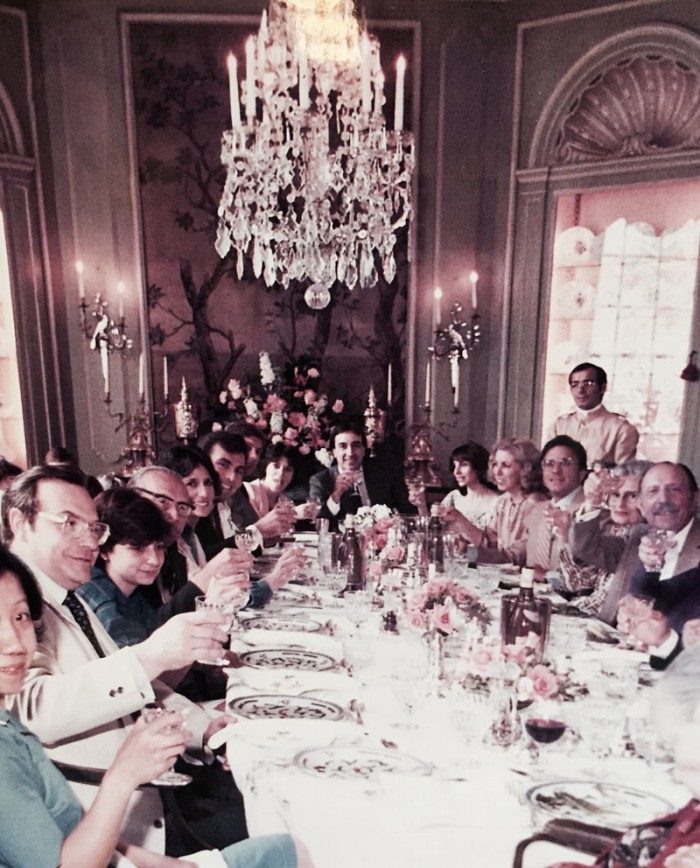 “We knew we wanted a feminine name and concept for the new restaurant in Florence, and we were thinking what to call it when it came to mind to name it after grandma. Too often we forget womens’ roles yet she was so important in our family.” 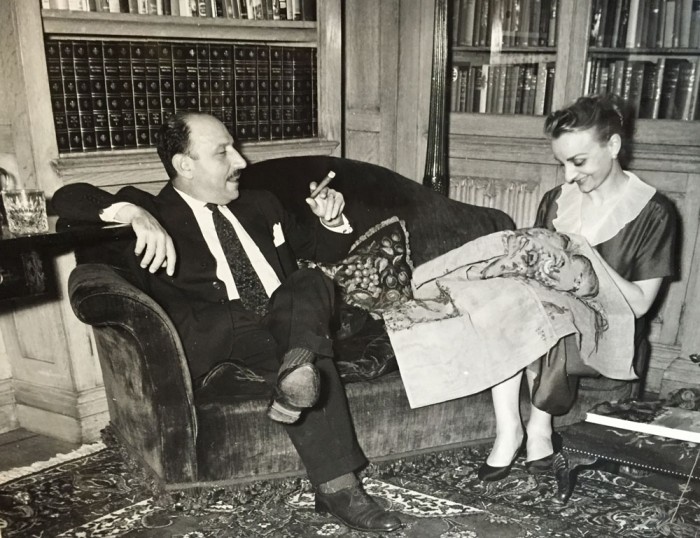 The team behind Irene – including Lydia, her aunt Olga Polizzi (Design Director of Rocco Forte Hotels), restaurant director Paul Feakes and art director Felice Limosani – developed a very personal concept for the restaurant. Departing from a literal embodiment of Irene, they thought about the objects this woman likes to wear, the perfume she favours, the music she listens to… 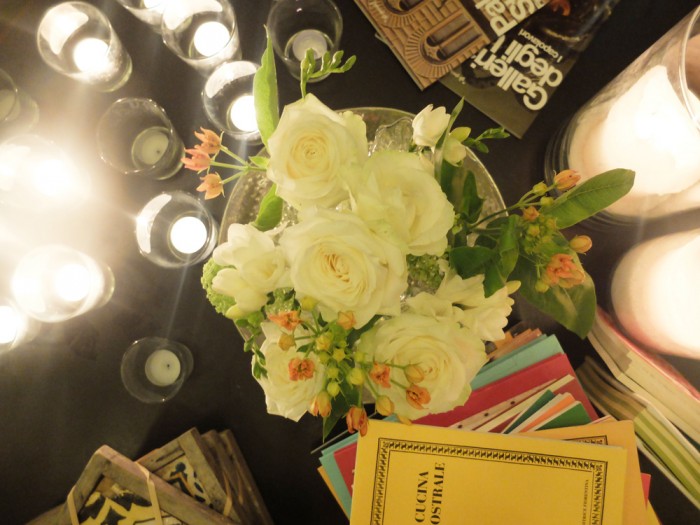 The resulting space is a modern “Mad Men”, a 1950s décor dominated by Scandinavian design armchairs with a warm lime green leather covering, contrasted with natural linen tableclothes topped with typical Tuscan “carta paglia”. Hanging from the high ceilings is a mass of cylindrical lamps in the gently psychedelic colour scheme that we find behind the bar, where bottles are back-lit by a patterned wall. Vintage inspired glassware hosts signature cocktails, though the plates are a classy and local Richard Ginori white. 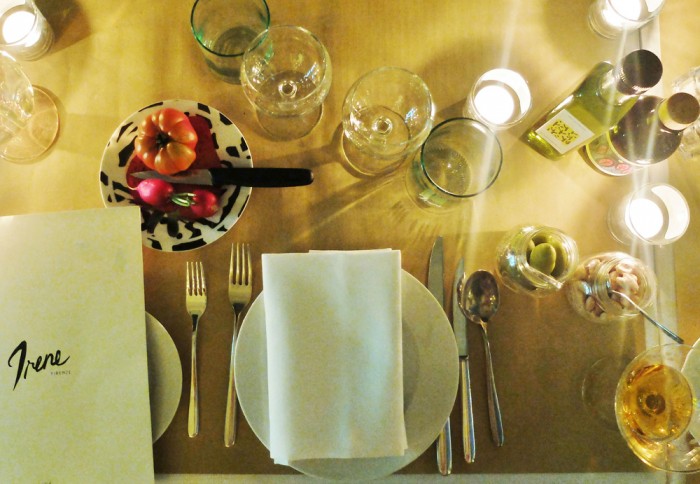 I had a chance to go into the kitchen at Irene’s and learn a few tricks from chef Fulvio Pierangelini, who developed the menu in line with the personality of Irene: insolent, free, contemporary, intruiging, malicious, irreverant. “We don’t bother writing this in the menu but of course everything is organic,” he says, indicating eggs which I would learn how to poach in a pot of boiling water. 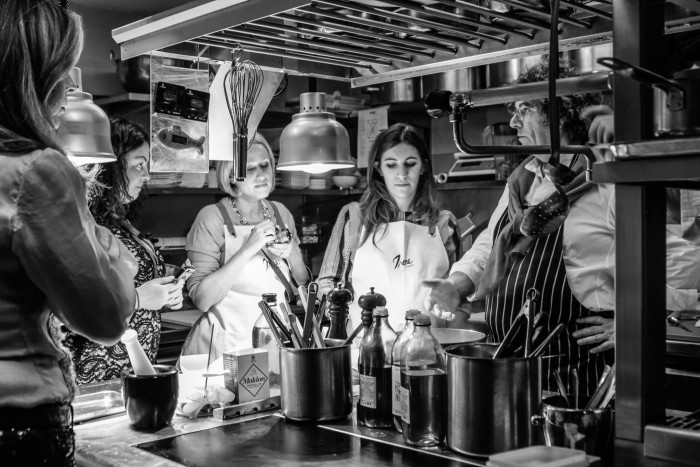 A small kitchen full of bloggers and a famous chef

The tiny kitchen is the realm of head chef Giovanni Cosmai, who sources the best fresh and local ingredients for Irene’s dishes. Pierangelini puts a cup of vinegar into the boiling pot, teaches us to stir the water into a vortex and then place the cracked egg in. The yolk eventually should come up to meet the white and create a kind of “shirt” (in Italian it’s uovo in camicia) but mine just looks like a mess. 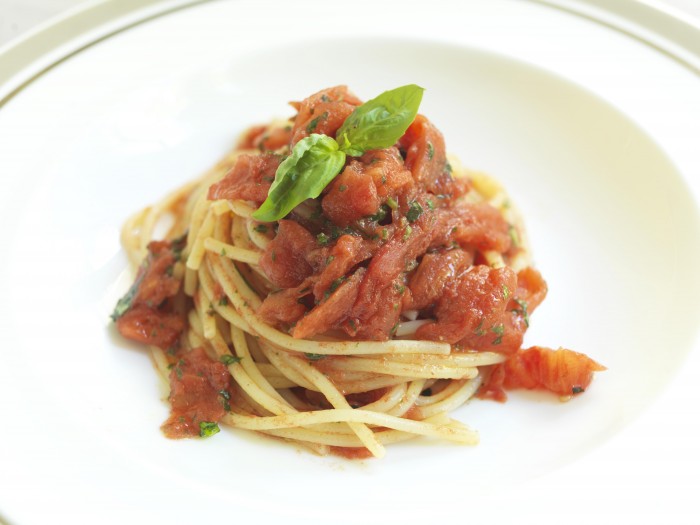 Pierangelini’s famous spaghetti and tomato sauce is made by crushing the fruit in his hands.

Pierangelini has an unusual trait (or more than one): he insists on tearing ingredients with his hands. He shows us how to make a simple spaghetti sauce that you bet tastes better than anything you’ve ever had. “Of course, this is a dish that is only at its best for two months of the year, but we try to make it as sweet as possible by removing the skin and seeds of the tomato,” he explains. The quartered and peeled blanched tomatoes are ready for the chef, who prepares a saucepan with some extra virgin olive oil of his own label and proceeds to smush them with his hands. He takes a knife and shows us the different between the surface availability to both heat and flavours. “Put it in the pan, making sure to use the right size for the amount you’re cooking, and then leave it alone. You see chefs tossing and stirring… don’t bother!” He is quite adamant. I can’t help but think that tomatoes were a convenient demonstration vegetable. If he made the octopus and beetroot salad with his bare hands I’d have been more impressed. 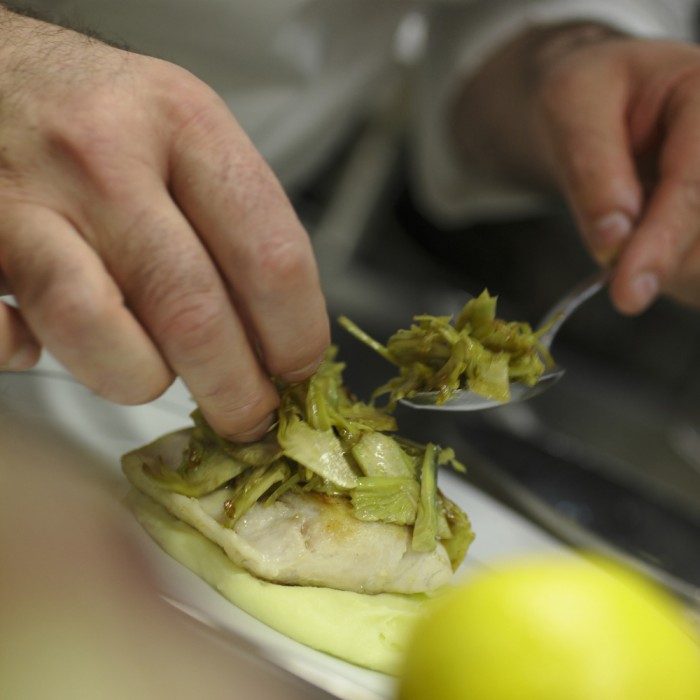 Let’s head to table. Delicate, fresh ingredients are combined with love, everything is exceptionally light. Fish and sea-food star in many of the apetizers and primi, while meat makes an appearance amongst the secondi. The octopus, beetroot and radicchio salad is divine, as is the fried calamari and vegetables with sweet and sour sauce (so light!). A carpaccio of fish is served with the thinnest slices of fresh vegetables. Prawn tartare with herbs. My disastrous poached egg makes an appearance with tartufo and asparagus. 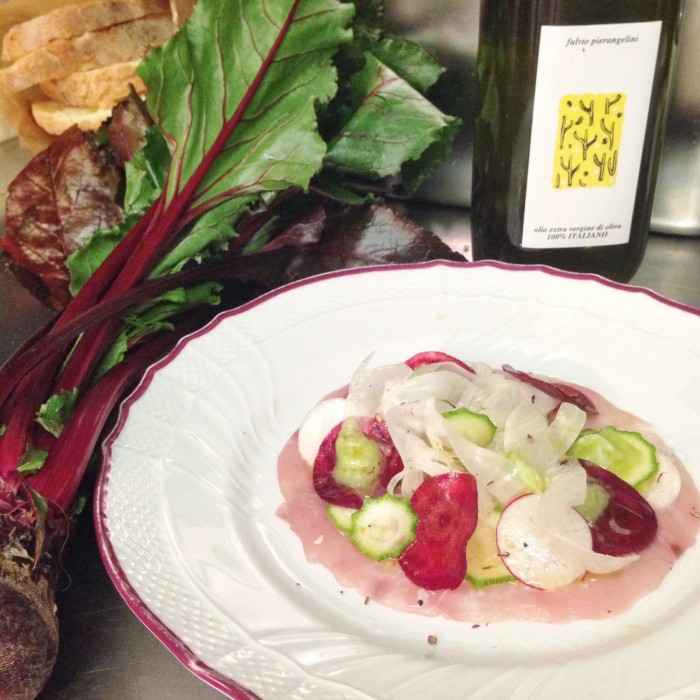 For primi, the raviolo is reinvented, for example filled with pappa al pomorodo, or filled with sage and placed in a thick bean soup with a layer of caramelised celery. For secondi there’s seabass, or roast porchetta, and lots of seasonal sides. Starters average 16 euro, Primi 18-22, secondi around 30 euros. Fresh desserts are a bargain at 4 euro. 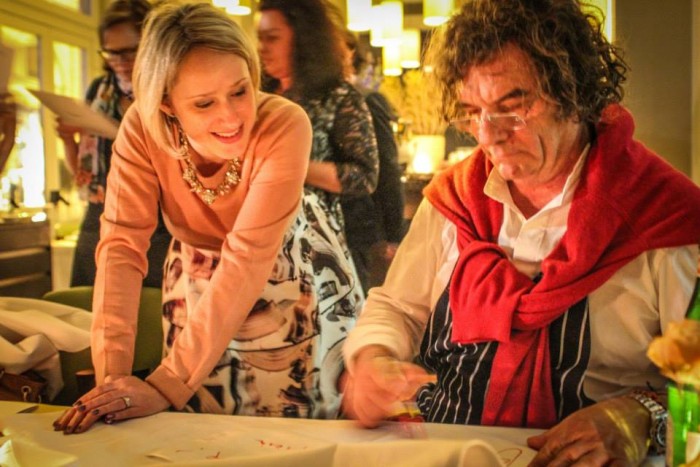 The chef signing my apron

In the Florentine landscape of fine dining, this newcomer is not only welcome, it is welcoming: service and food with an attention to detail but entirely lacking pretention. 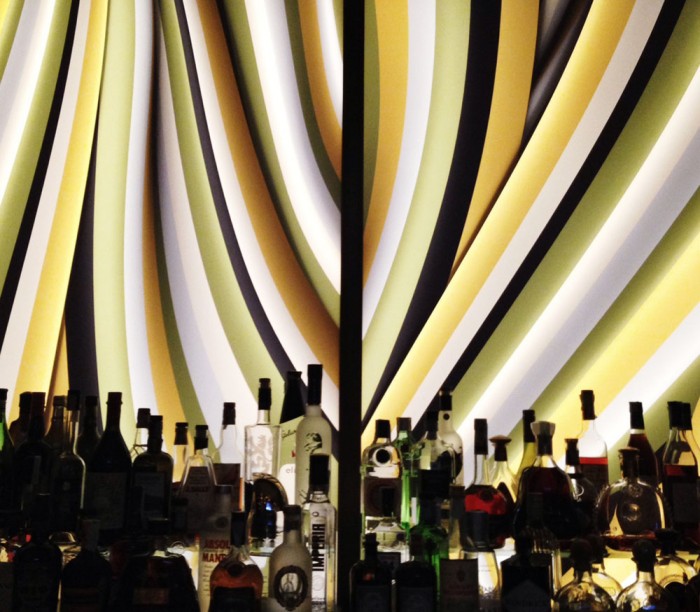 The bar at Irene – silhouetted bottles