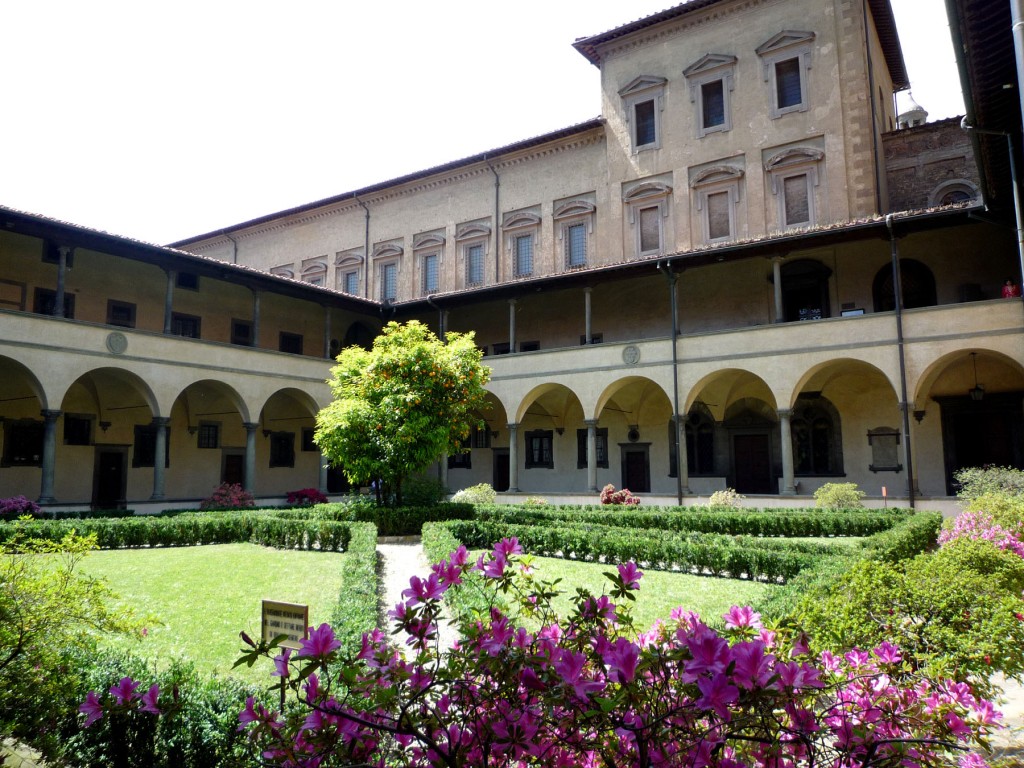 Exterior of Laurentian Library seen from courtyard of San Lorenzo

Mannerist architecture is not exactly an easy topic, and it’s even more difficult to understand when you can’t see it in situ (and when photos are prohibited in this location!). But for anyone who has had, or will have, the fortune of stumbling into the oddly silent courtyard beside the church of San Lorenzo, Michelangelo’s Laurentian Library is a true gem. This article helps you understand why this work of architecture is truly revolutionary.

The Laurentian Library was named in honor of Lorenzo de’ Medici (aka Il Magnifico), who was a great collector of ancient and modern texts and who greatly expanded Medici library at end of 15th century. He had a famous collection of books that was seized during Medici exile in 1494; it was later recovered and moved to Rome under Cardinal Giovanni de’ Medici.

The  idea for a library at San Lorenzo in Florence seems to go back to 1519 along with creation of the Medici Chapel by Michelangelo in the same complex, but the plan only really took off in 1523 when Cardinal Giulio de’ Medici became Pope Clement VII. As part of his plan to glorify the Medici in the area of Florence traditionally dominated by this family, he wished to bring the Medici book collection back to Florence and unite it under one roof.

Between 1524 and 1527, Michelangelo worked steadily on this wonderfully well-documented commission: letters between M and the Pope are about everything from lighting, site, cost, structural issues, design of doors, tabernacles, reading desks, ceiling decoration, etc. He was helped by a large workshop and the easy availability of local building materials (a rare moment that he was not using Carrara marble). Then in 1527 the Medici were exiled; work came to a halt and was finished after the artist moved to Rome, with the execution more or less to his plans and with some involvement via courier.

At the Laurentian Library, Michelangelo had to surpass interesting structural challenges: the monastic complex already exisited (with monks’ dormitories and adjacent church) and the rest of the neighbourhood was already built up so there was only one place to put the library, and that was above the extant structure. For this reason he had to make it particularly light. The location on the third floor also accommodated certain other necessary aspects of library construction such as being high up in case of floods and being near the monks’ dormitories so that it could be easily accessed (think of the placement of the library at San Marco, for example).

In the photo above of the exterior, you see a long area on the left – that’s the “reading room” – and a taller space on the right, which is the “vestibule”. The latter is a kind of ante-chamber that contains a staircase (built by Ammannati in 1559) that leads into the other room.  Have you ever seen a room just for a stairwell before? Probably not.It’s a particularly tall and weird space! It’s also a little dark, since the pope didn’t agree with Michelangelo’s plan to install skylights here – he said you’d need two monks to work full-time just to clean the dust.

Mannerism in the Laurentian Library 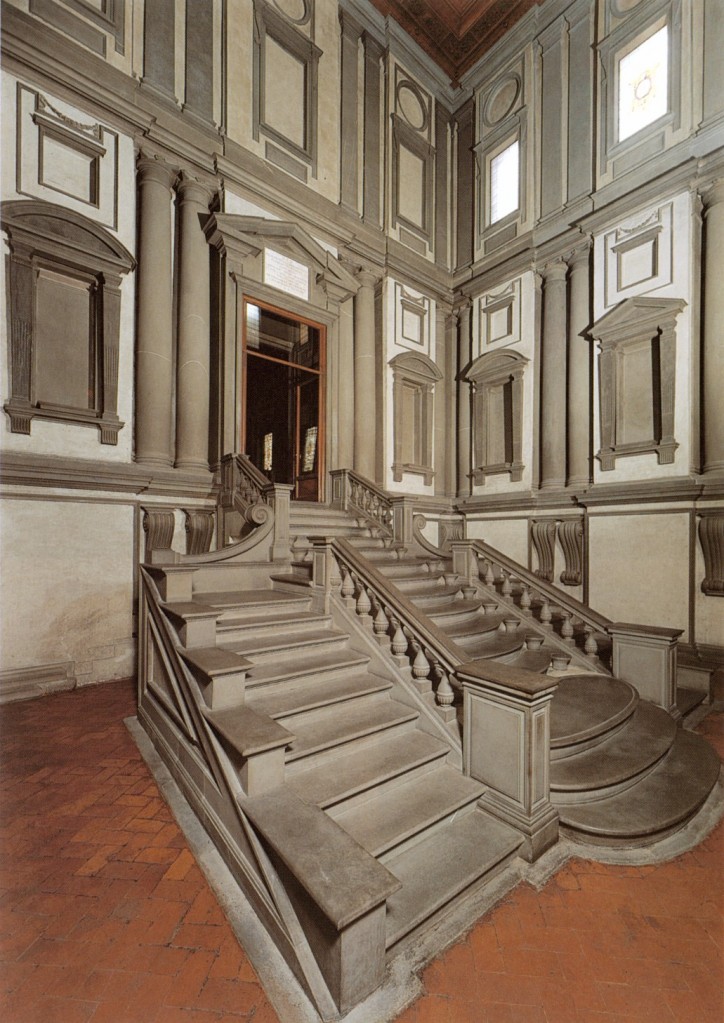 This space is one of the most discussed architectural spaces of the Renaissance, and this discourse is focused on Michelangelo’s bold architectural innovations, in which he breaks with normal Renaissance usage. As John Shearman writes in his 1967 Mannerism: “The principal development here is an application of licence to all architectural members, major and minor. It is the first building that seems to have been turned outside in, for the massive treatment of the interior walls belongs by tradition to exteriors.”

One of the examples of this licence is the use of columns, which are in fact here in pairs. Contrary to logical usage, they are actually embedded into the wall (as are the pilasters in here, but that’s a bit more normal). For Shearman the resulting effect is that “it seems that the wall is squeezed forward by the order, or as if the architecture had become organic, capable of movement.”

Below these double columns are giant volutes (scrolls) that seem to hang there like tongues – they, too, serve no purpose. And in fact they are rather too large for the space, so that in the corners they, as James Ackerman says, “seem to mate rather than meet“.

The stairway itself is also particularly impractical and unusual. I have always felt that it looks like the flow of lava spilling down onto the terracotta floor. Did you know that Michelangelo wanted to make the stairwell in walnut wood like the reading desks in the room next door, but this idea was discarded… because the squeaks would have been distracting to the studious monks! 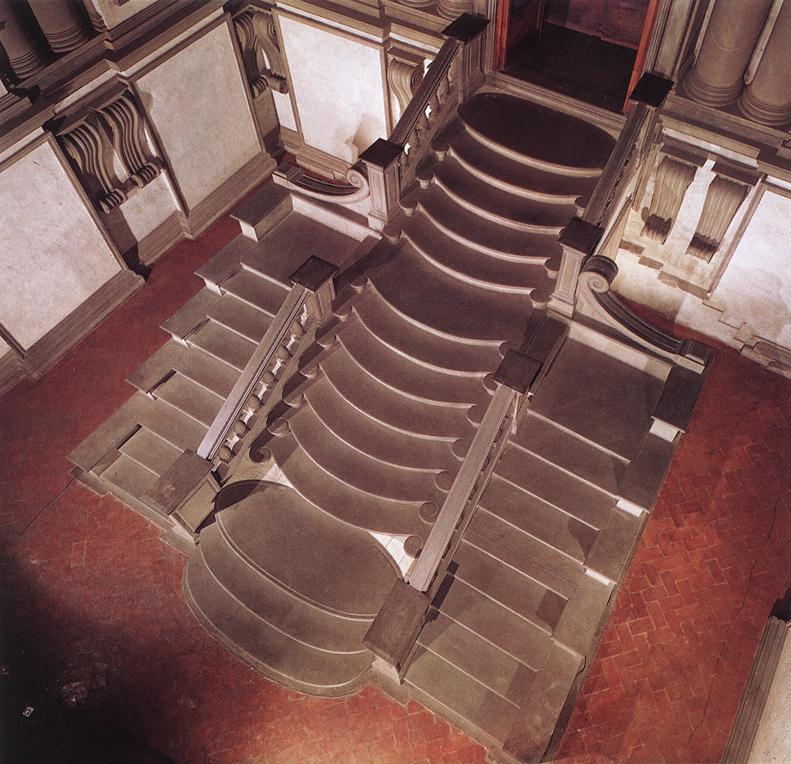 View of stairway from above (source: from a book)

In the current pietra serena version, if you walk up the central area, the curved fronts finish in curly cues that are extremely effective in catching shoes. There is a “hand rail” of sorts down the center, but there is no rail or protection at the sides – there is no way this would pass ANY building code nowadays! These dysfunctional elements are intentional because the staircase was conceived of as a freestanding work of sculpture rather than functional architecture.

Michelangelo was generally praised by contemporaries for his “good judgment” in breaking the rules of ancient architectural theory in this space, while other architects were heavily criticized for following his example. Vasari worried that misunderstanding Michelangelo’s example could lead to bad architecture and said: “Certain plebeian and presumptuous architects lacking in disegno have in our times produced all their monstrous things, worse than the German.” 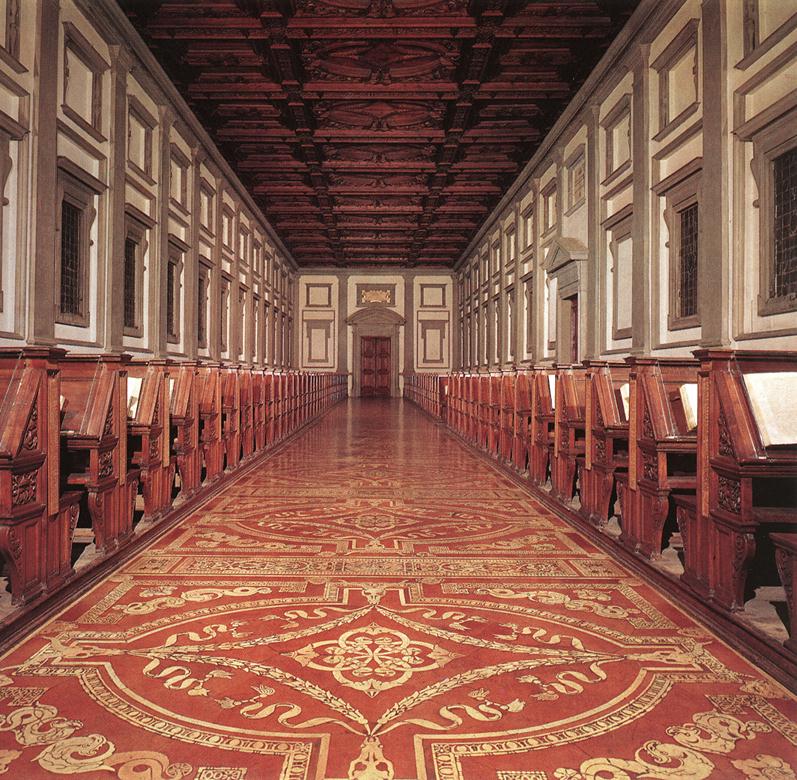 By contrast, the adjacent reading room constitutes an independent architectural system that totally does not relate to the vestibule and has a much more calming, normal, and warm effect thanks to the traditional layout, regular windows, and beautifully designed walnut furniture.

How to visit the Laurentian Library

When this article was written in 2010, regular visits and photos were not permitted. I am happy to report in 2017 that it is open regularly and can be visited with a combined ticket to the church. See the official website for details.