Jane Fortune, Founder and Chair of the Florence Committee of the National Museum of Women in the Arts, has been digging around the storage areas of the Pitti Palace looking for works by female artists. Lucky for us, she tracked down a beautiful David and Bathsheba by Artemisia Gentileschi. Unfortunately, it was in terrible condition, with a lot of paint loss that had been badly in-filled with jarring dark grey paint. And so, Jane Fortune and the Committee funded the restoration of the work, which is now complete and set for a tour in the USA. The work was presented for a week around Christmastime at the Palatine Gallery, and again today in a very special talk at the American Consulate in Florence. Yours truly was privileged to attend.

SUBJECT: The Biblical legend of David and Bathsheba recounts how David saw the wife of Uriah bathing in the garden of her home. (I guess they were neighbours – David had stepped out onto his own loggia to get some air.) He summoned Bathsheba to his palace and one thing led to another… and then to their offspring Solomon. Artemisia’s canvas focuses on the lithe body of the nude Bathsheba, but David is up there in the left hand corner on the loggia.

REPETITIONS: Like many artists of her day, Artemisia, being a good businesswoman as well as artist, had no qualms 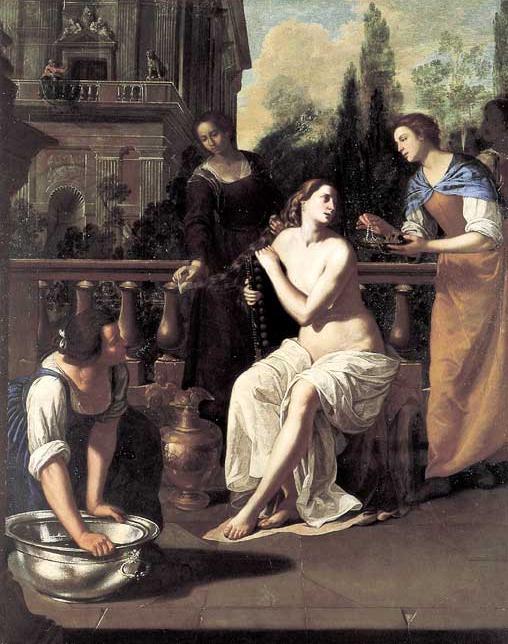 about producing various close versions of a painting for patrons who requested them. There are apparently “at least six other versions,” the closest of which is in Potsdam. Unfortunately I could not find a reproduction of that for you, so here is one in Ohio instead. Artemisia’s female take on the female nude was much in demand by her patrons, and this was a good subject matter for her to display her ability.

THE PITTI VERSION is documented as hanging in the apartment of the Grand Duke in the Pitti Palace in 1662. Later that year, in a document recently revealed by scholar Lucia Meoni, the Florentine tapestry weaver Pietro Fevere was commissioned to weave a copy of the painting. The tapestry is well preserved in the deposits of the Pitti. The David and Bathsheba was probably painted for Ferdinand II de’ Medici around 1635 while Artemisia Gentileschi was working in Naples. He was familiar with her work because she had worked for the Medici court of Cosimo II during her years of residence in Florence from 1613-20.

In fact, the STYLE of the painting is an interesting blend of her later Neapolitan style and the works of her pre-Caravaggist youth. This is particularly evident in the smooth unidealized flesh of the nude figure, and of the very specifically referential pose of Bathsheba, which should recall that of Susanna in Artemisia’s first and dated work, the Pommersfelden Susanna and the Elders of 1610. If Artemisia brought this work with her when she left Rome after the trial of 1612, Florentine publics may still remember it. The position of Bathsheba’s hands, purportedly adjusting her hair, are too artificial not to be referential, yet the pose is toned down to be much less dramatic. While Susanna’s hands hopelessly protest the illicit gaze of the Elders on her left, Bathsheba’s hands are not aimed at the intruder who is in the loggia at her right, but rather serve as a convenient sheild for one breast and a way to create an interesting twisting pose for the whole body. Indeed, as Director of the Palatine Gallery Serena Padovani says, “the classical language Artemisia elaborates here is rather distant from the theatrical force of her early Florentine phase, although the elongated figure of Bathsheba is similar to the Allegory of Inclination she painted in the Casa Buonarroti in 1615.” Artemisia also played with other referential elements: the “artemisia gold” fabric at right is typical of her oeuvre in general, while the water carrier on the left looks to me like a citation of Raphael’s Stanza dell’Incendio.

THE RESTORATION carried out by Nicola Ann MacGregor, Elisabetta Codognato and Sandra Freschi was a challenging one. The work had been stored improperly, causing massive paint loss which had been filled in at some point with ugly dark grey paint that just made the lacunae more obvious. There was also some inpainting and some yellowed glaze. They first had to remove all the paint that was not Artemisia’s, at which point there were distracting big white areas over about a third of the canvas. This was no case for what MacGregor called “interpretative inpainting”, so the team carefully toned down the white areas to merge with adjoining ones using shades of neutral. As half the face and one eye of Bathsheba is missing its original paint, one of the greatest challenges was to make this less obvious but not create a face that was not faithful to the original. The restorers were greatly successful, as the painting is now legible, consolidated, and open for study.

DISPLAY: The Palatine Gallery display is historically dictated, so there’s no room for the “new” Artemisia in the permanent collection. The work is currently in Pisa with the Galileo exhibit, and then is scheduled for a tour of the United States TBA. Upon return to Florence, it may find a home in a closed room of the Pitti that could be opened upon request. Here’s hoping that a new museum space can be created in which we could study this work alongside others by Artemisia and her female colleagues.

Bibliography:
The factual information about the restoration and documentation of this work is based on notes taken at the conference (18/05/09) and on the pamphlet created for the restoration, available for purchase online.

Jane Fortune wrote an article about the restoration in The Florentine.

For further reading, I promise a post on Artemisia with full bibliography soon, but in the meantime you may also be interested in the female biographical film project.