Located in the center of Florence, if you use this guide to learn what you’re looking at, it’s very interesting to both adults and children. You can explore it freely and get a sense of what life was like during the Renaissance. This is one of my favourite places to bring visitors to Florence, especially kids. 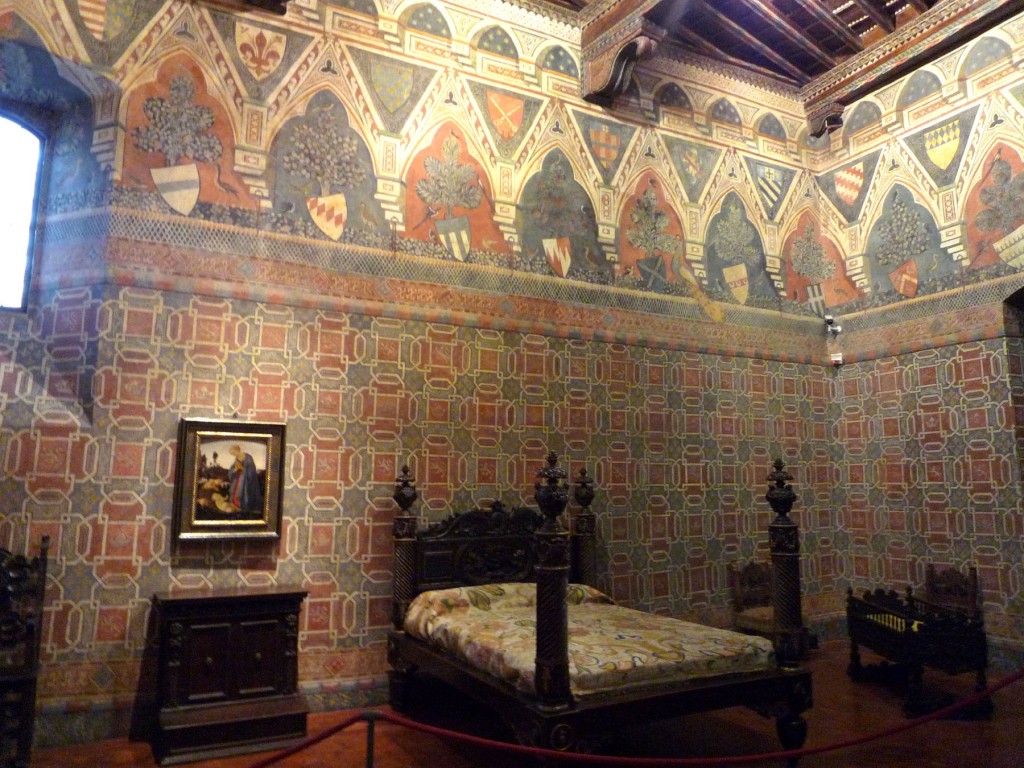 The palazzo was commissioned in the mid 14th century by the Davizi family, who were members of the Arte della Calimala (wool guild). The Davizi had to sell in 1516 due to financial difficulty, and the building changed hands twice before being owned by the Davanzati family (that give the building its name), who had it until 1838; at which point it was converted into apartments and fell into a state of disrepair. 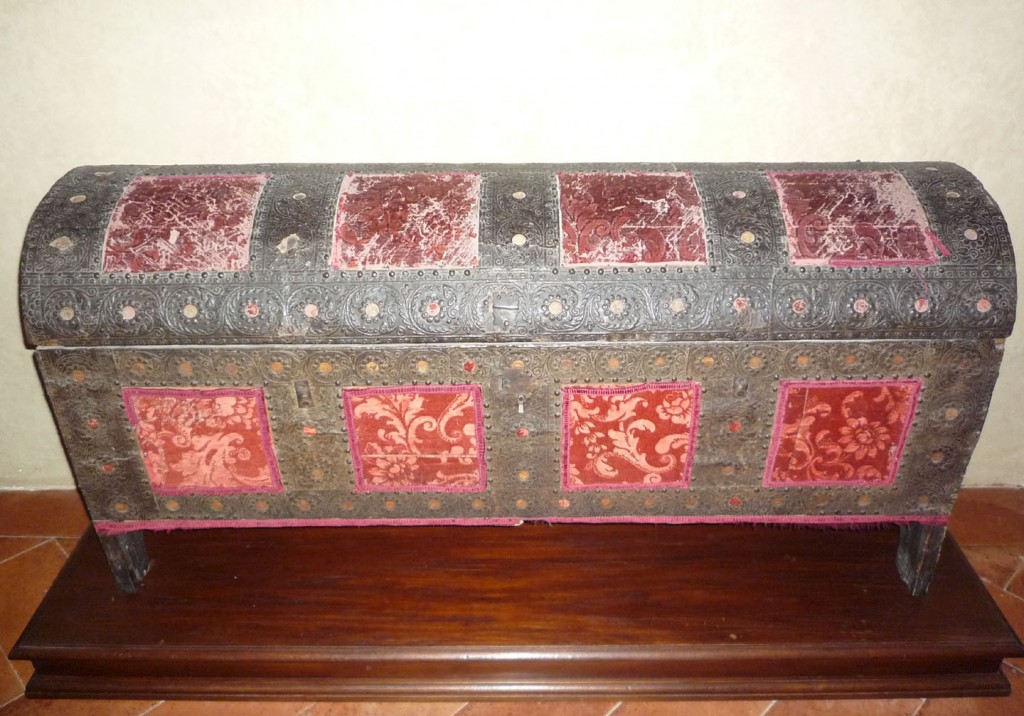 A cassone in metal and velvet

Purchased in 1904 by the antique dealer Elia Volpi, It was restored and opened in 1910 as a museum. The collection of this museum was always in flux, since Volpi also used it partially as an antique showroom and the objects were for sale! In his restoration, the frescoes were enthusiastically in-filled, and the furnishings reflected the scholarship of the day on how the early Renaissance palazzo must have looked. This initiative must be taken into consideration in light of the late 19th century revival of the Florentine Trecento, fathered by Americans like Bernard Berenson (the art historian) and Herbert Horne (the collector; his place is also a museum).

A complicated history characterizes the war periods, with lots of changing of hands. In the 50’s the palazzo reopened as a state museum, but the money for restoration was not enough to keep it standing. It was closed in 1995 because the building was falling down. It is now being opened again after 10 years of restoration.
The restoration has been major. The whole building had to be secured; floors were taken up and relaid, walls consolidated and frescoes repainted. The architectural framework is now safe and the work that is left to be done is on the walls and then the refurnishing of the museum. It’s an interesting place to visit already, and will be even more so when completed. Hopefully the scholars on board will take into account the vast scholarship now available on domestic architecture and furnishings, which has blossomed in the past 40 years, when choosing how to set up the new museum. New literature on the Palazzo Davanzati would also be a big step, since there are only a few books on it and they are not highly informative. 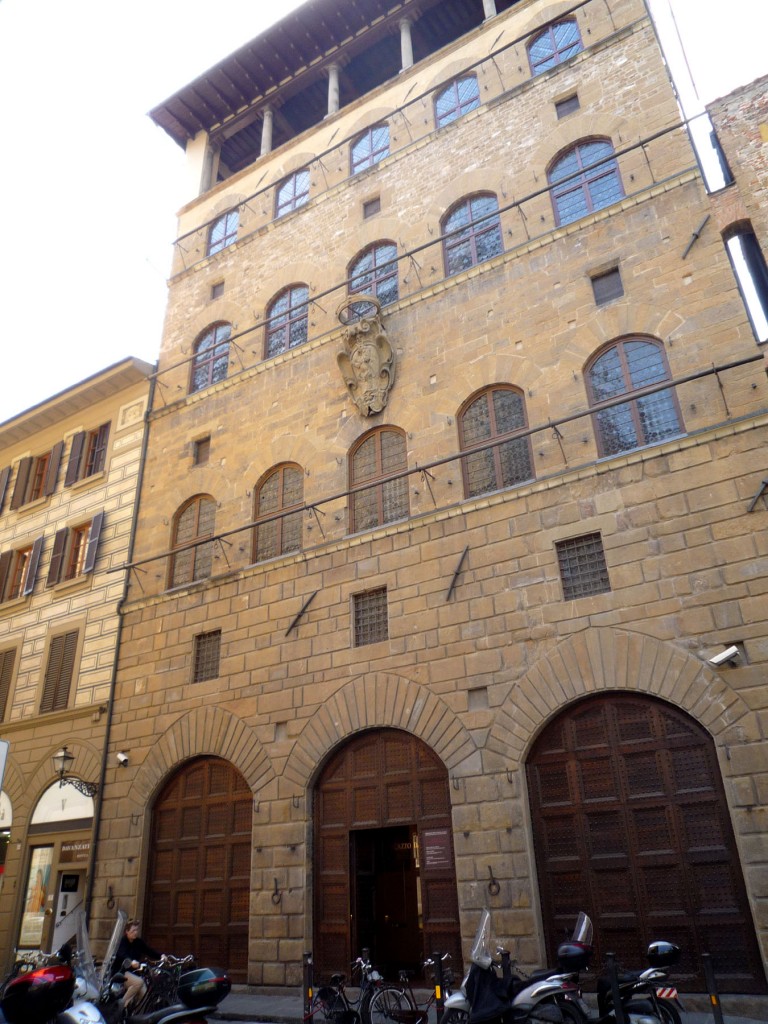 The facade was added to a grouping of medieval tower houses that were purchased with the intent of unifying them. The topmost level is an open loggia that was added in the 16th century.

The palazzo is in some ways typical of trecento family architecture in that it is rather well reinforced. The ground floor, now accessed by large doors set in arches, was before an open space (loggia) for commercial use. These kinds of spaces were typical of Florentine palaces of the 14th century, and can be related to the city’s strong merchant population. The loggia was used for storage or business, while the family lived upstairs, in this case with two levels of living quarters and the top level dedicated to cooking and servants. 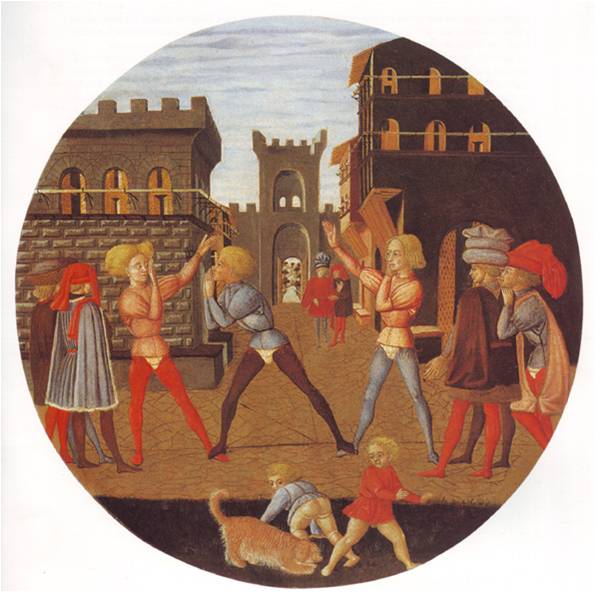 The entrance loggia is now used as an exhibition space. Usually on display is the prized birth tray by Lo Scheggia, the younger brother of Masaccio [2010: this is now exhibited in the upstairs bedroom]. A birth tray is an object commissioned either to celebrate or to encourage a birth in the family. The front of Lo Scheggia’s tray shows the “gioco della civetta“, a game that youths played apparently in a piazza. Although this game continued into the 19th century i have been unable to figure out exactly what was involved, other than that three participants are required, and that the one in the middle has to place his feet on top of those of his companions… !! The back of the tray shows two little boys, or “putti”, also playing. They are trying to grab each others’ private parts.

Through the loggia you reach an open courtyard and a stone stairway reaching to the first floor. Notice that, beyond the first floor, the upper part of the stairway is built in wood, not stone. This might be done so that, in case of riot, the family could hole up upstairs and knock down the stairway so that nobody could get at them. This remains part of tower-home mentality. On the other hand, the concept of a courtyard as a communicative space for the whole building is rather new. It indicates a certain amount of spatial planning. Also, the courtyard was a private space for the family. The use of a courtyard as both a practical and a familial space was theorized in the 15th century, and the courtyard became a standart part of palace architecture. 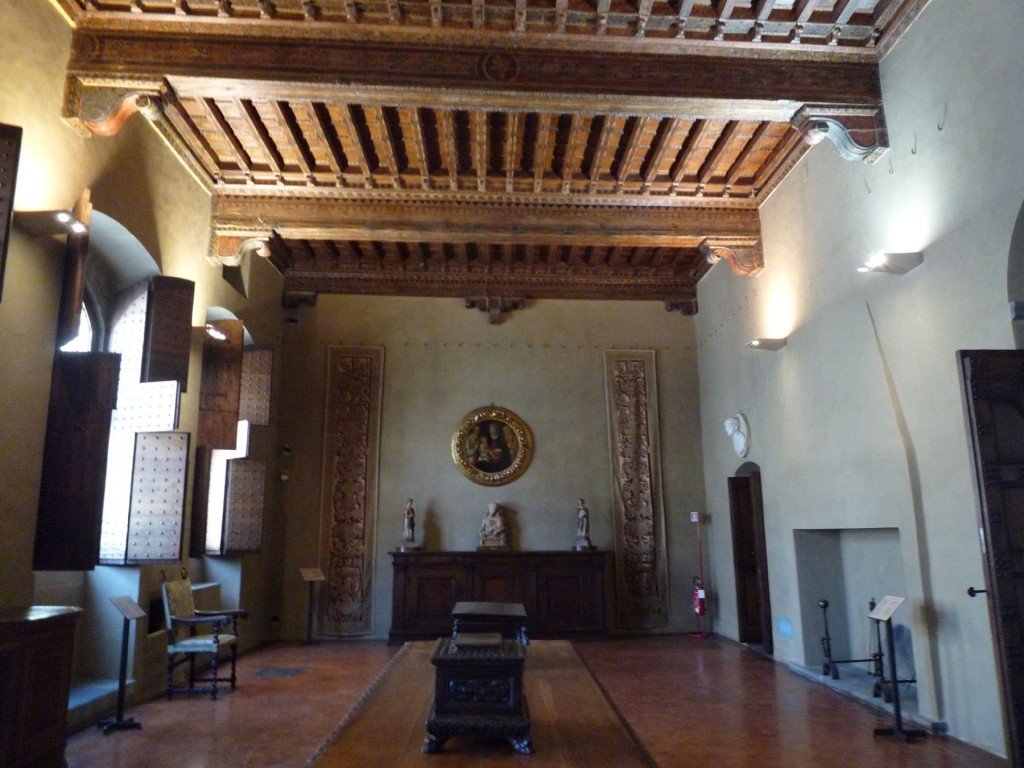 On the first floor above ground, the “piano nobile” in Italian, the front room was for business affairs. In correspondence with the three openings of the loggia below are three holes in the ground that can be revealed by opening up trap doors. These permitted the owner to check who was coming in, and in case of undesireables, drop heavy things on their heads. A storage nook in the wall behind one of these holes now contains a stone ball and I imagine this space was used to store defense objects like that. The room has a few pieces of furniture and paintings from the 15th and 16th centuries now on display, suggestive of what it might have looked like before. On the central wall of this room, adjacent to the courtyard, take note of the well, which permitted residents to draw water throughout the whole house. 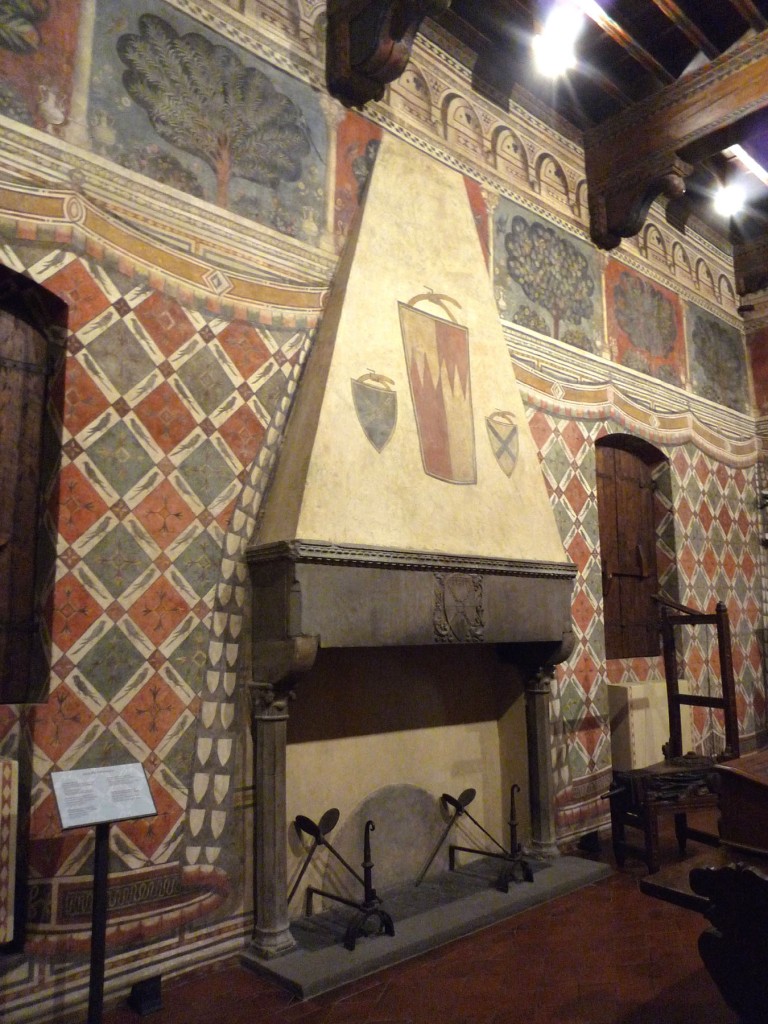 The room of the Parrots

The Sala dei Pappagalli (room of the parrots). A room adjacent to this one is set up like a dining room, and has a large fireplace. The much-restored frescoes on the wall (at this point more rightly called wall paintings than true frescoes) have a pattern of diamonds and parrots after which the room is named.

A very small room in between this one and the next was a bathroom, with a potty hole. Florentines reinvented indoor personal hygeine, which was known to the Ancients but lost in the middle ages.

Next to this bathroom was the study, or studiolo. Its wall paintings are now lost, but it is suggestively set up with objects that one might find in the man of the house’s room used for storage of business and recreational items. On display are a forziere (safe or strongbox), a cassone covered with velvet (more rightly found in a bedroom), some chairs, some small bronze statuettes, and some paintings with mythological scenes.

Accessed from the hallways is a bedroom set up with an antique bed and crib, as well as with other objects that would be found in the Renaissance home, like devotional paintings and a cassone. There is an “ensuite bathroom” with wash basin and other apparatus (though no hole connected to the central drainage system here).

Sections of the upper floors of the buliding are still under restoration, but each has the same layout as the first floor, and was used for family living.

The third floor hosted the kitchens, since this was most convenient for dispelling the heat of cooking, as well as in case of fire. There is an interesting display of practical objects from everyday life, like spinning tools and cooking pots. Servants’ quarters were also up here. As of Summer 2009, the kitchens are open for guided visits (free with entry) every hour on the hour. You must phone to reserve a slot, or be available to wait until there is a free space on the tour.

The walls of all these rooms were once decorated with frescoes; where they do not represent realistic scenes they were patterned in imitation of the tapestries that would have hung on special occasions or in winter to keep warm. Those that are now on view are heavily restored (ie, in-painted). They must be taken only as illustrative of the “early renaissance palazzo” but not considered for stylistic elements.

The art-historic significance of this palazzo is mainly its architecture, as an example of a typical domestic building of the mid trecento. However, the various changes in the quattrocento and the major restorations of the 19th and early 20th century make it hard to use as a “document”. However, many forward thinking elements, like the courtyard that gives access to all the rooms, and the desire to create a logical space for family life, are important predecessors of the great 15th century palaces, like those built by the Strozzi and Medici. 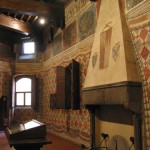 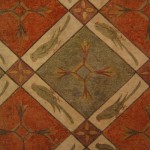 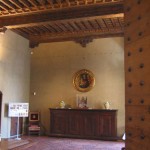 The “sala” or big room on the first floor 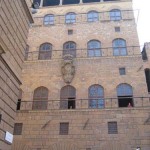 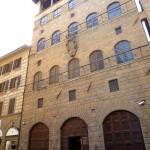 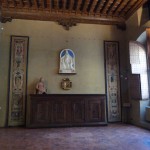 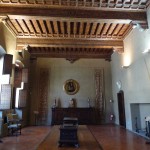 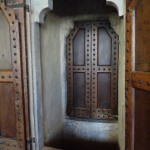 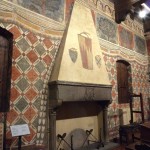 The room of the Parrots 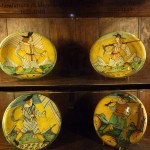 Montelupo ceramics on display in the parrot room 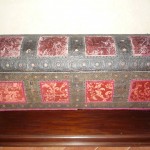 A cassone in metal and velvet 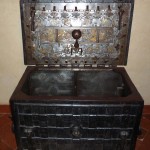 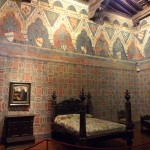 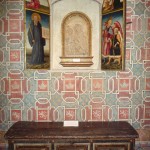 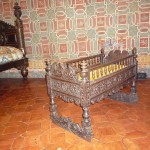 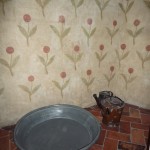 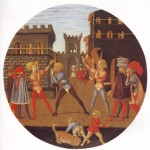 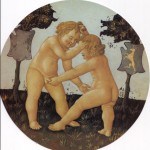 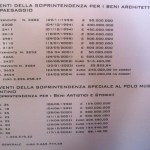