Palazzo Strozzi: for the love of God, money, and democracy 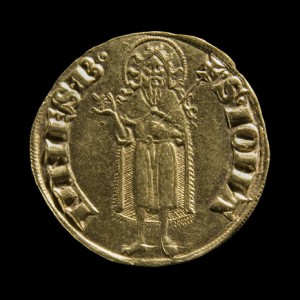 You’d have to have been dropped on the head when young to not notice the fortuitous timeliness of this Fall’s exhibits at Palazzo Strozzi – upstairs “Money and Beauty: Bankers, Botticelli and the Bonfire of the Vanities” and downstairs “Declining Democracy“. The headliner show addresses the beginnings of modern banking and the consequent fortune of Florence which happily resulted in the commissioning of a lot of art (mostly out of guilt or fear). Now we’re plunged in the depths of an economic recession, and Italy’s in the headlines for being the latest country that might bring down the Eurozone, a harsh downgrade that happened just days after this exhibit opened.

Whenever possible, as the director of the Strozzina, Franziska Nori, explains, the Strozzina attempts to address parallel themes in a contemporary manner. Since the economics of contemporary art was already the topic of an exhibit in 2008, curators took a step further back in time to what allowed the Medici and other banking families to make so much money in Florence: Democracy. By grouping together contemporary artists and theorists from various parts of the world and showing their visual results to the public, the exhibit contrasts positive acts of collaboration with more negative ones that embody the sensation more typical of the Italian resident: a feeling that it’s pointless to try to do anything about our current situation.

I had given myself the formidable task of trying to write a review article of the two exhibits together, but once I saw Declining Democracy and heard Dr. Nori’s answer at the press conference to the question of how the two shows are related, I realized this was a far stretch. The best I can do is this: both exhibits are equally contemporary, and they will make you reflect upon our current, collective situation whether you’re an Italian resident or a visitor from abroad. 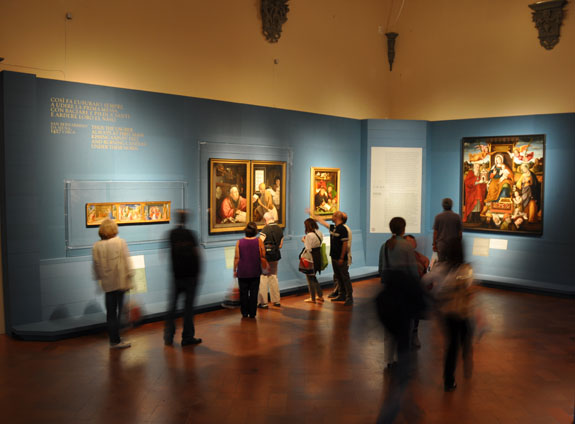 A brief summary of the “Money and Beauty” show is in order. To kick things off, we meet the almighty florin (distant ancestor of the almighty dollar), a diminutive little sliver of 24k gold that jump-started the Renaissance in Florence. The Florentines realized that a recognized, high value currency was just what was needed to make trading possible between countries – kind of like today’s euro. Thanks to this currency, and to Florentine bankers’ and merchants’ skill at manipulating its exchange, a lot of money flowed into the city and was reinvested in beautiful things like art and architecture.

What better place than Palazzo Strozzi to address this moment in history! A statement by Giovanni Rucellai, not mentioned in this exhibit, comes to my mind. Rucellai married his ally Palla Strozzi’s daughter, and he sums up either family’s values with regard to what we would now call “conspicuous consumption:”

“I think I have given myself more honour and my soul more satisfaction by having spent money than by having earned it, above all with regard to the building I have done.”

Inside the biggest 15th-century palazzo in town, the exhibition treats the following themes: the monetary unit, usury, exchange, merchant activity, sumptuary laws, bankers and artists, beauty, and crisis. The last section refers to Botticelli’s personal crisis that led him away from Neoplatonist thought and into a personal yet very public religious crisis, not to the crisis in which we find ourselves today, though the parallel is too tempting not to draw… All the rich consumerism of the 15th century culminated in crisis in the 1490s, one of a different sort than today’s, but in neither case was crisis able to stave the flow of consumption on the part of those who could or can afford it.

We are led through the exhibit with the help of texts by the two curators. You can just imagine the discussions (fights?) that author Tim Parks and scholar Ludovica Sebregondi must have had before coming up with the unprecedented solution of giving each his or her own, signed, voice. Parks’ text remarks upon the irony that has always attracted me to both Italy and the Renaissance, while Sebregondi provides necessary historic facts. The childrens’ text is useful to get us thinking about some items from a more contemporary viewpoint.

The school of art history in which I studied is the social-historical approach, primarily associated, at its start, with Michael Baxandall in California in the 1970s. I so internalized texts like his classic Painting and Experience

that many parts of this exhibit felt very familiar to me. Merchant life, religion, art and beauty co-existed in the Renaissance, each conditioning the other. Many books have attempted to illustrate this relationship in a visual manner, but none so successfully as this exhibit – with the only problem that exhibits generally don’t have extensive footnotes. Sources, however, are made rather clear, and more can be intuited by the scholarly visitor. 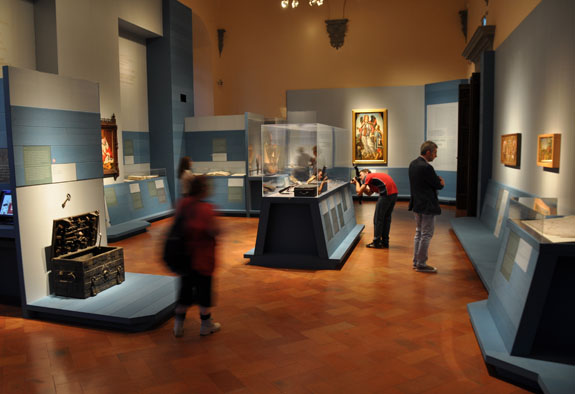 Some items in the exhibit, and their related texts, point to the beginnings of our current crisis. A beautiful domestic Madonna and Child by Botticelli (from the Museo degli Innocenti) is of a type that might be the first true “consumer product.” It’s also product placement for the luxurious clothes and jewels that its worshippers could not wear due to sumptuary laws. Like a Renaissance version of the tv show Gossip Girl, which, along with Sex and the City was created exclusively for product placement of clothing and accessories aimed at women who would like to be able to afford them.

A document recording the creation of a Medici holding company that provides the family security from personal bankruptcy is an early example of the structure of companies today. In Italy it’s like the limited liability S.r.l. Probably the Medici were the first furbi to set the base for the “scatole vuote” that are more common in Italy than anyone knows – fake companies created in order to push around money and evade taxes.

Renaissance bankers and merchants -and those fortunate enough to be in the productive circle related to them – financed everything you see in this show, including the palace that contains them. From a taffeta belt with a precious niello on the clasp and the illustrated manuscripts from the Biblioteca Laurenziana that we call “decorative arts,” to what we call “art” – altarpieces, domestic paintings, portaits and more. The rich were great patrons of what we think is art, which they funded for two main reasons: religious works to excuse themselves from usury, and anything else (portraits of themselves, etc) to show off how smart and cultured they were. 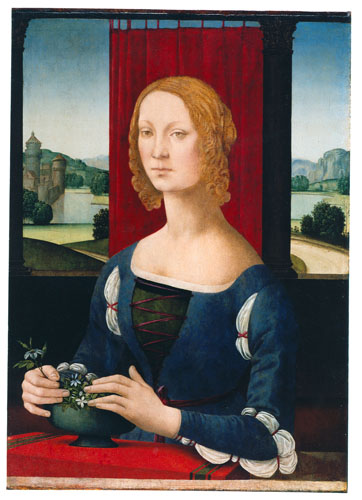 The question beckons: why is there little to no funding for the arts in Italy today? (i.e. if this whole practice started here…) Should not the banks and the wealthy take it upon themselves to sponsor artists and promote culture? One reason that this does not happen as often as it should (with the Fondazione Palazzo Strozzi being one lovely exception) is that “art” now is not “art” then. Renaissance “visual matter” was made almost exclusively upon the request of a patron, who had control over the content if not the style of the final “product.” Only some works were made without a specific patron, such as stock productions of birth plates and decorative items ready to be personalized for the buyer. But seldom did artists make things for themselves. Even Leonardo da Vinci, who filled sketchbooks with marvels, did not make large panel paintings of plants or rushing water. And artists on the payroll, like Mantegna, might have had a secure job but they were at the service of a master. A portrait by Botticelli, or to be specific, the one by Lorenzo di Credi of a young woman (above), serves a specific purpose – to communicate something flattering about the sitter, like one’s facebook stream might do today if well curated. 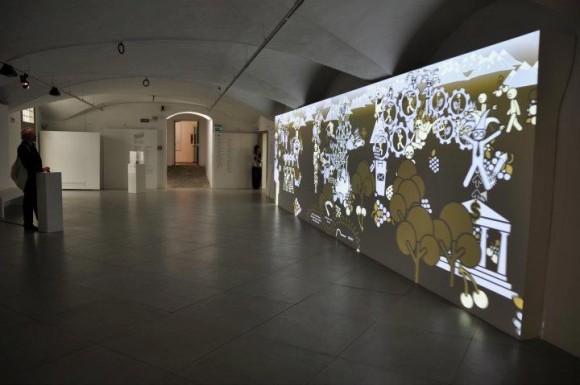 Hop on downstairs with me for a moment, to the Strozzina, where what is on display is a far cry from the eye candy upstairs. It is difficult to imagine who – especially a bank – would want to fund a cartoon wall of ideograms based on a twitter stream that you can shoot, but in which you cannot make a real difference. Or video art (so in fashion), or a website that encourages you to smile at Berlusconi for sixty seconds. All of these works are striking and interesting, but they are produced by independent-thinking artists. This is the hallmark of art today: the creativity of the single person or the group (which actually started in the Renaissance…). Art in the service of corporate interests verges on advertising, and is frowned upon. Yet everything we saw upstairs was advertising. Advertising for patrons’ piety, intelligence, generosity and beauty.

When Damien Hirst titled his diamond-encrusted skull “For the Love of God,” did he know that most Renaissance Florentine account books are prefaced with the phrase “in the name of God and profit”? Perhaps it was not what his mother uttered when she found out what he was doing, but a literary reference to the intrinsic themes of both exhibits – when the day of reckoning comes, what will YOU have done that makes you a (good) citizen? 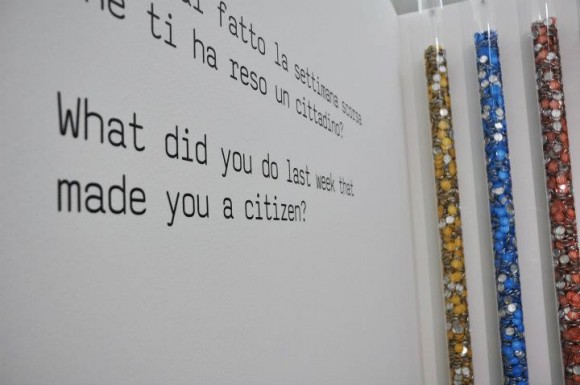