The newly restored Visitation by Pontormo is one of the highlights of the current exhibition “Pontormo and Rosso Fiorentino” at Palazzo Strozzi (which I reviewed here). The painting represents the intense moment of encounter between the Virgin Mary and her cousin Elizabeth, who reveal to each other that both are pregnant (Elizabeth is the mother of Saint John the Baptist). For a close look at the painting and more about the story, see the excellent video above by my colleague Kirsten Hills, for The Florentine’s video news collaboration, LdM News.

The museum has provided extensive information about this painting from an art historical point of view, as well as a report from the recent restoration that was carried out especially for the show; I publish an edited version below. 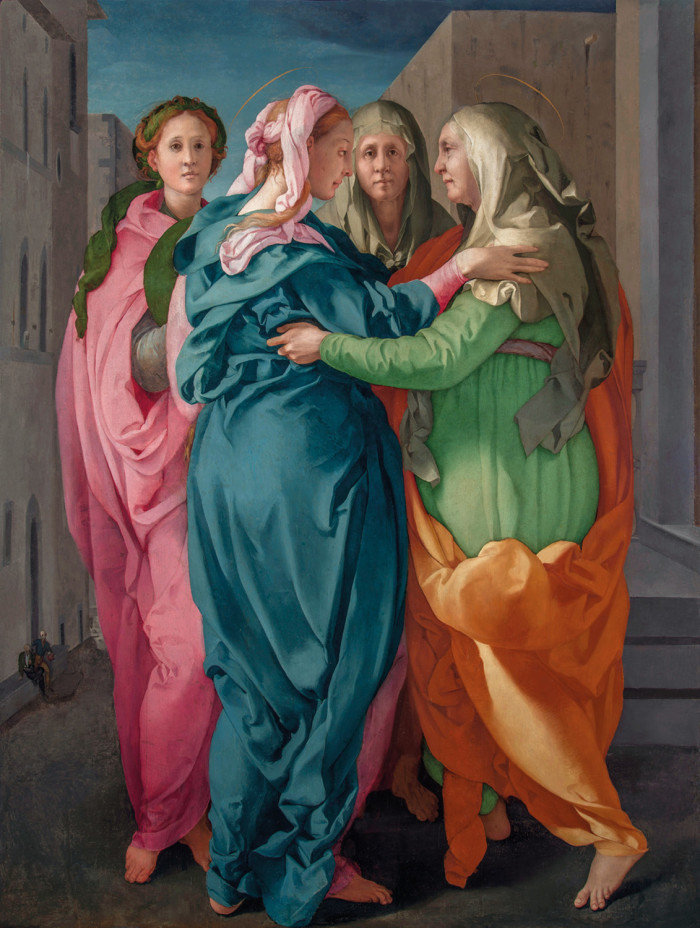 Pontormo’s Visitation in Carmignano was not mentioned by Vasari, perhaps because it was commissioned by a member of the Pinadori family, who was an enemy of the Medici. Thus the painting was attributed and published only in 1904, although after this first article by Carlo Gamba, an Early Modern citation popped up: in an edition of Francesco Bocchi’s Le bellezze della città di Firenze (1591) expanded by Giovanni Cinelli in 1677, Cinelli tells us that the home of Senator Andrea Pitti housed “a smaller model for a Visitation by Pontormo, with extremely fine drapery painted with sincerity, and I believe that the larger original is to be found in a villa belonging to the Pinadori family in Carmignano” (p. 286).

Although this remark might have one believe that the painting was for home rather than church use, the 1538 will of Bartolomea del Pugliese, Paolo Pinadori’s wife, left a sum to pay for masses to be said “ad aram visitationis Beatae Mariae Viriginis in dicta ecclesia sancti Francisci existentem sub titulo et nomine altaris del Pinadori” (Maria Grazia Trenti Antonelli, Il Pontormo, le opere di Empoli 1994, p. 32). So the will may be taken as a terminus ante quem for the altarpiece, which must have been finished and already installed on the altar by 1538; yet it cannot be used as evidence for the altarpiece having been painted around that date. Rather, experts date it earlier – visually it is very close to the Capponi Chapel (1525-8), based on Pontormo’s choice of colours and the way in which he builds the folds of the drapery. 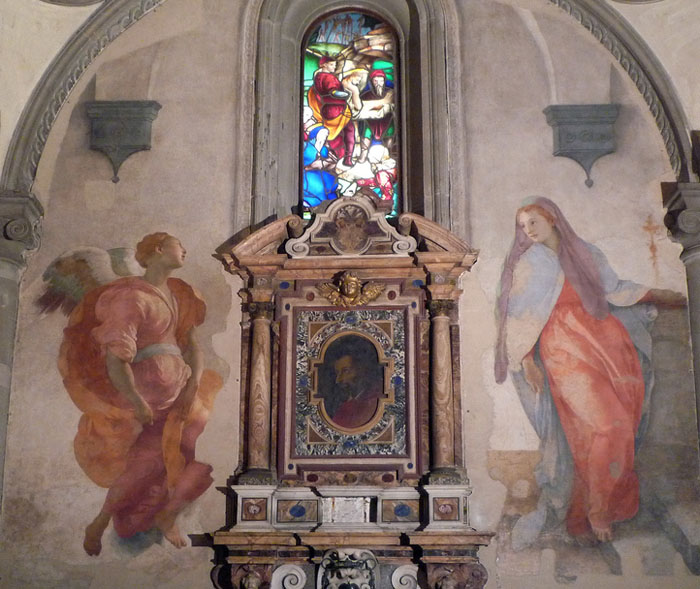 The Virgin in the Capponi Chapel Annunciation could almost be considered a fifth character in the encounter of Carmignano. In both paintings the swelling garments worn by the women, held tight by a girdle beneath the bust then billowing out around the waist to suggest an almost ovoid shape, are identical, as is the drapery ruffled by sharply contrasting areas of chiaroscuro and revealing, in places, a crisp draughtsmanship which allows the shape of the legs and shins to emerge from beneath the fabric. The two paintings’ compositional rhythm also shares a certain sprightly elegance imparted by the figures’ gracefully bending legs, arms and elbows.

Alessandro Cecchi suggests that the altarpiece be dated after 1526, the year of Paolo Pinadori’s death – an event which may have provided his widow with the opportunity to renovate the family chapel or to build a completely new one. It was in those years that the Pinadori family, suppliers of paints and colours for artists, had the opportunity to encounter Pontormo through Ludovico Capponi, who was renting out a room to Paolo and Bartolomea’s son Bonaccorso for use as a “workshop” and also through the Confraternity of St Sebastian, with which both Pontormo’s and Bronzino’s ties are well known, and which the young Bonaccorso was himself to join in 1528. 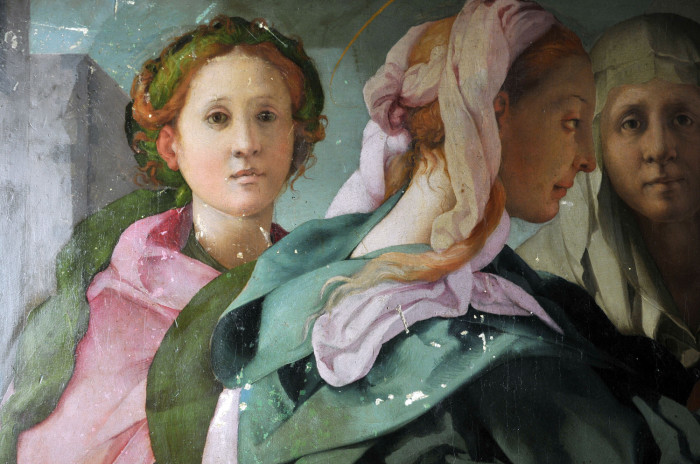 Pre-restoration detail of the Carmignano panel

In the Carmignano picture, which may indicate a certain religious sentiment influenced by the Reformation, Pontormo continues with the experiments he began in the Capponi Deposition, seeking to capture the same mysterious, suspended atmosphere, which is further strengthened in this picture by the calm simplicity of the composition. While the panel may indeed be pervaded by a “German” feel, it is more difficult to trace the echoes of Albrecht Dürer’s engravings which some scholars have detected in other works by the artist.

But then, the altarpiece is not innovative for its composition so much as for the intensely abstract atmosphere pervading the scene, an atmosphere sustained by the disproportionate size of the figures in comparison to the Florentine architectural backdrop and by the artist’s multiplication – as though in a mirror – of the number of figures witnessing the scene (Pinelli 1981, p. 119). The two “handmaidens” with the Virgin and Elisabeth, staring fixedly into space, are fully- fledged alter egos of the two main figures: the clothes worn by the younger handmaiden are in the same colours, in reverse, as those of the Virgin’s garments, while the older handmaiden bears an extraordinary likeness to the figure of Elisabeth, except she is seen from the front. These figurative devices make it more complicated to interpret the painting, whose significance scholars have yet to fully understand. 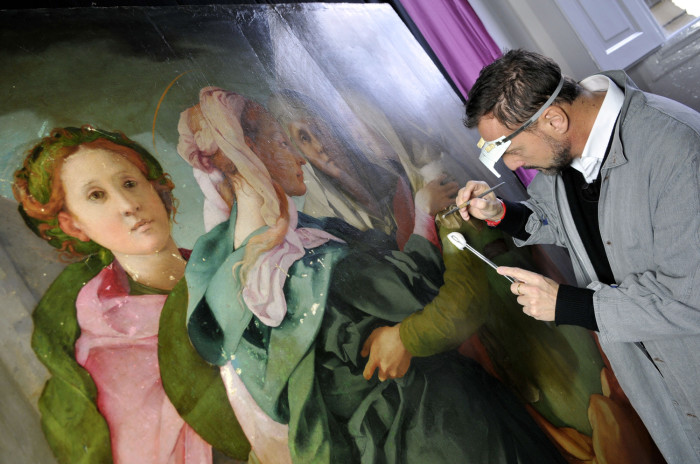 On inspecting the Carmignano Visitation, I immediately noticed damage to the lower part of the panel consisting in splitting in the wood which could just be made out behind the glass, some old and now badly ageing renovation jobs and a considerable number of knocks taken when the painting was being moved or hidden in some safe hideout. A yellowing varnish covered all of the figures and had been applied particularly thickly to St. Elisabeth’s billowing cloak, turning it from green to brown. 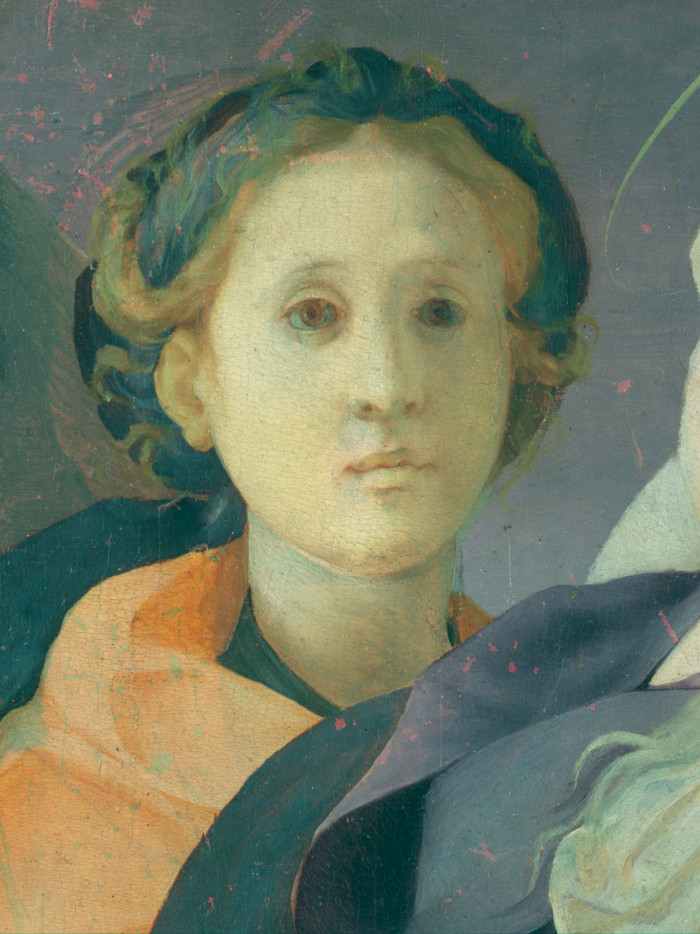 Once in my workshop, the painting was analysed and investigated in depth with the care due to such an important patient. The Visitation’s wooden support comprised five well-sawn poplar-wood planks glued together, probably with caseine-based glue as was the practice at the time, and two deal-wood cross-pieces. Infrared reflectography revealed the underlying pencil drawing and regular chequering. The painting is a faithful reproduction of the preparatory drawing chequered by Pontormo himself and now in the Uffizi’s Drawings and Prints Cabinet. The inspection also showed us that the artist had “second thoughts” regarding the handmaiden’s feet and hair, the Virgin’s veil and St. Elisabeth’s left hand. Pontormo made a few changes to them, yet without interrupting his painting. 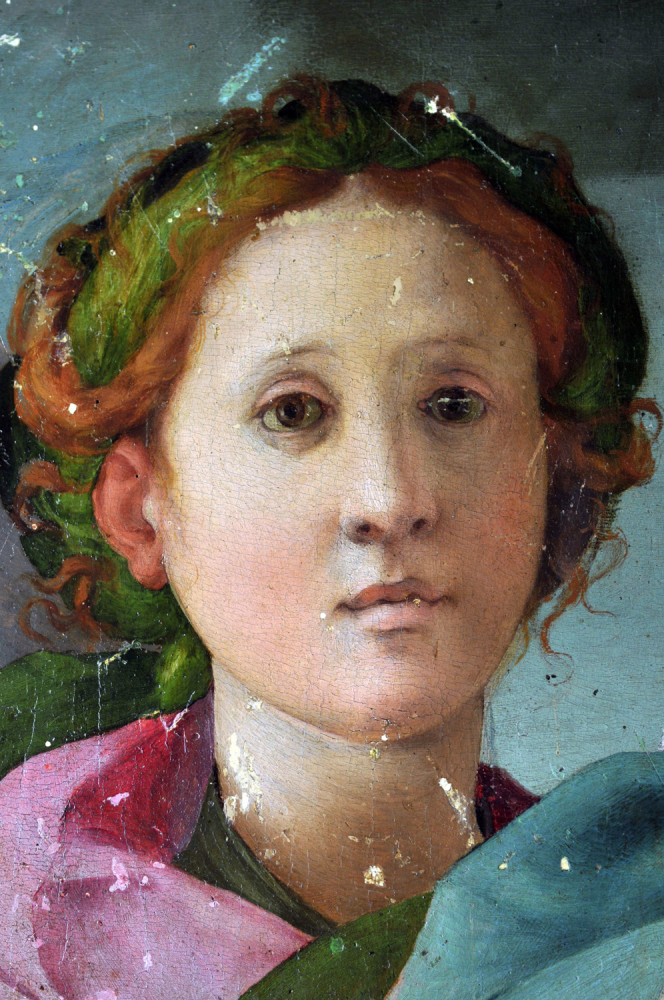 Further investigation revealed that Pontormo had used the same palette that he used for the Descent from the Cross in Santa Felicita. In the Visitation he mixed white lead with azurite, yellow ochre with brown and madder lacquer. The Virgin’s mantle was painted in a single sitting with thick brushtrokes of blue and oil, the folds bunching up, the handle of the paintbrush occasionally scratching the colour and softening the fabric. He painted the faces, particularly that of the old lady, with fine, short brushstrokes, using cinnabar red to soften their noses and mouths as though they were reflecting light from below. He added the blonde, almost golden, curls at the end, after completing the sky. We discovered a bright blue sky beneath a black overpainting that had made it almost overcast, and Pontormo’s clouds are white and ragged. The façades of the buildings were grey and cold, but beneath the dirt we found them to be bathed by the light of Florence, with mottled plaster. A woman is leaning out of a window and a white cloth is falling from a window ledge. A small donkey’s head peeks out from behind the corner of a bulding, while two passers-by converse on a bench like “masked mannequins”. The tower looming over St. Elisabeth has been shortened and there is sky above it, while a wooden beam sticks out of the wall. 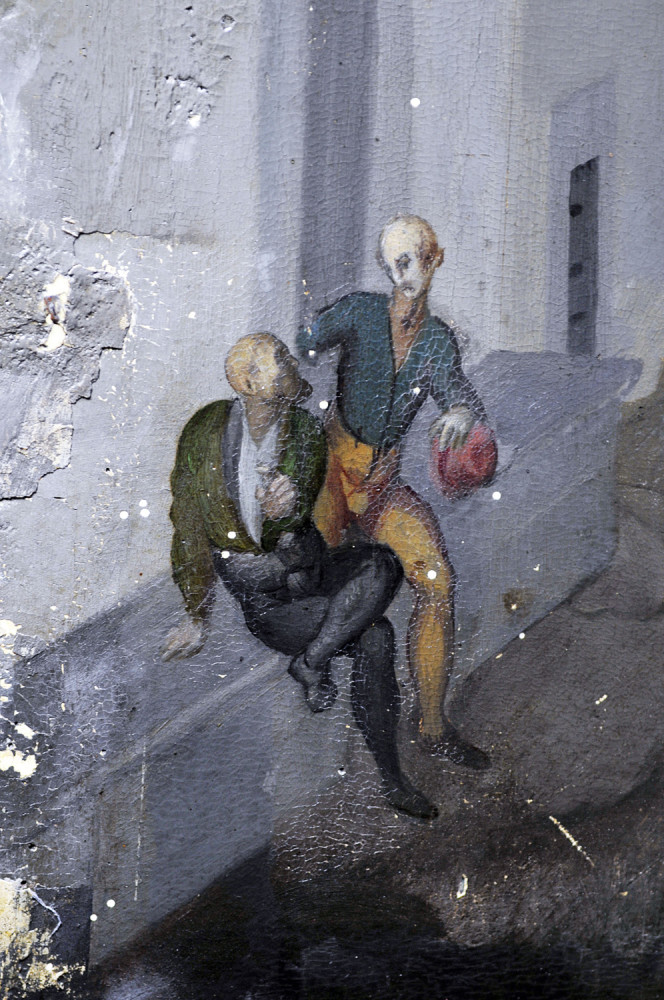 We diversified our cleaning methods to remove the heavy repainting of past centuries, calibrating our timing and processes with the help of emulsions, solvents, paint brushes and a scalpel. The original colours, muted by old restoration, re-emerged, while the blue of the Virgin’s mantle kept its greenish hue on account of the varnishes incorporated into it. The cloudlike effect of the orangey-yellow mantle has recovered its mix of lead-tin and ochre and the female figures’ ringed eyes now have delicate greenish glazing on the pupils. After consolidating the colour in a handful of places, we filled 1,673 woodworm holes with putty and retouched the painting with tempera colours. After applying a protective layer of revitalising Retoucher Resin varnish, we blended the final finishing touches to breathe new life into the Visitation‘s figures: four large female figures, two small male figures, a tiny female figure leaning out of a window and a smiling donkey.