The Uffizi Galleries has announced an exceptional acquisition: the 1557 view of Florence printed by Hieronymus Cock. This is the second oldest printed view of Florence, and the most complete. Only two intact copies of this huge, multi-folio print are known, and Florence now owns one of them! 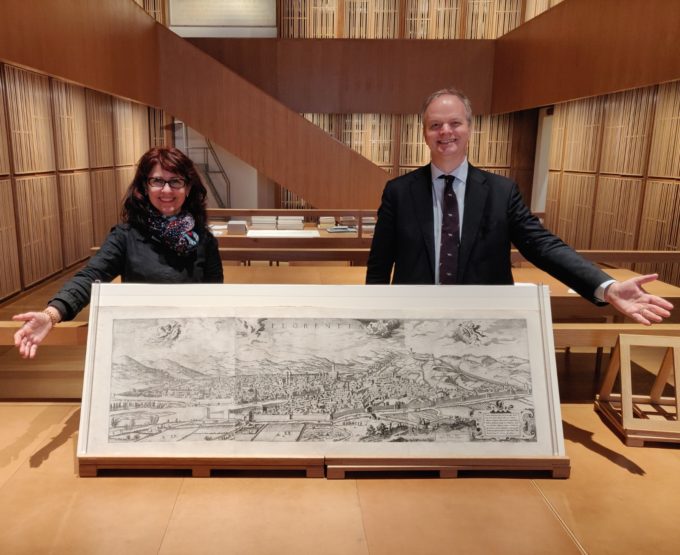 Curator and director of Uffizi with the new acquisition

The oldest printed view of Florence is the so-called Chained view of Florence attributed to Francesco Rosselli, a woodcut from the 1480s. The medium of this print allows for less detail than later techniques, yet it’s a surprisingly detailed and accurate image. It’s also rather large, measuring 584 x 1315 mm, and as a large early modern print, only fragments remain, so the version we know well is actually a later copy. Of course, there are some early painted views of the city that provide useful references to art and architecture historians, but these printed views are interesting for their desire to accurately record place from a cartographer’s approach, and for their very medium that permitted circulation.

The chained view of Florence | Wikipedia

The second oldest – but most intact – view of Florence is the one by Hieronymus Cock, known in an exemplar conserved at Kungliga Biblioteket in Stockholm; that copy previously belonged to the publisher Leo Olschki. The Uffizi got word, last year, of another copy available for sale through an antiquarian in California, and the new acquisition, added to the collection of the Gabinetto dei Disegni e delle Stampe degli Uffizi, has now arrived in Florence and been announced in a press release.

Cock was an important Flemish engraver in 16th-century Europe who, in the guise of print publisher, had an important role in diffusing imagery across borders. He illustrated Ancient Rome, but also the latest inventions by Raphael, bringing High Renaissance motifs beyond Rome, into the homes of collectors and contributing to the fame of this artist in particular. (I wrote about the importance of copies in the diffusion of visual motifs and more in my contribution to the book Paper Museums, The Reproductive Print in Europe.)

The view of Florence is huge: 1,30 meters wide and 36 centimeters wide, three copper sheets were required to print it on three pieces of paper that were then assembled together. It is made with a combination of engraving and etching, allowing for a very high level of detail (much more so than the medium of woodcut, used for the “Chained View”). Printed in Antwerp in 1557, after the death of the author and his heirs, the plates passed into the hands of another Flemish print publisher, Paul van der Houve, who printed this second edition in 1601 in Paris – this information is described in a plaque near the bottom of the print. 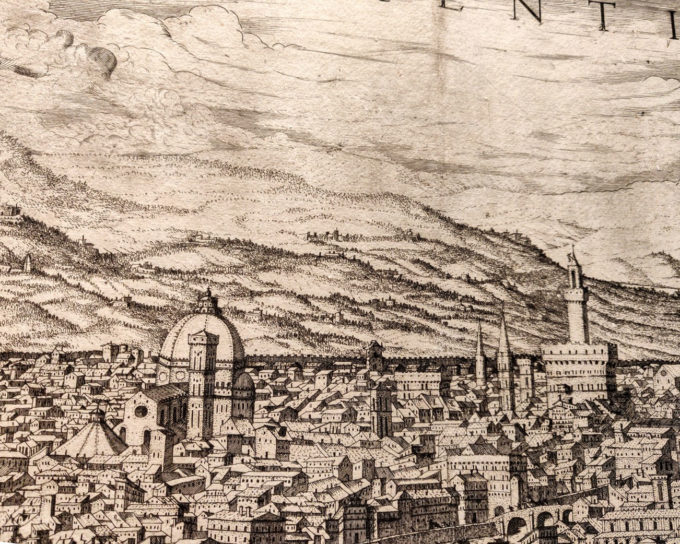 Drawn from approximately the same point of the city as the Chained View, south-west of the city, but tilted at an angle that permits the designer to include greater information about the buildings and especially the major monuments of Florence, which are all totally recognizable to us today. Within the intact walls surrounding the city, we can easily pick out the Duomo and Baptistery, Palazzo Vecchio, the Bargello, Santa Maria Novella and the Fortezza da Basso. Beyond the walls, countryside, cultivated lands populated by little hardworking men, the river with its boats, the construction sites with men walking up planks, charming details that make this not just a map but a little “slice of life” from the middle of the Sixteenth century in Florence. 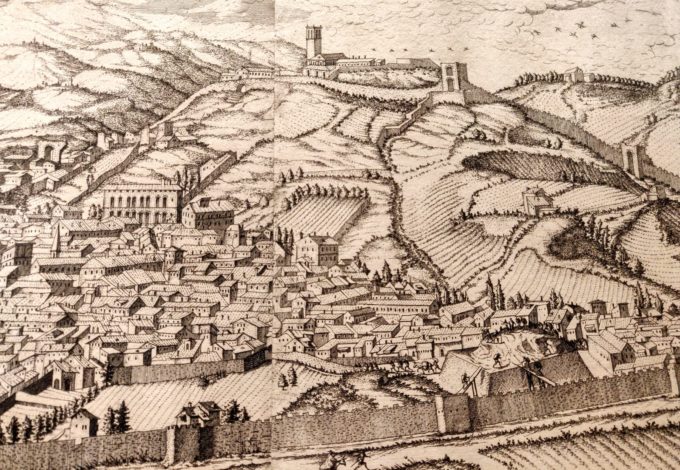 Detail of area around Palazzo Pitti and the Boboli Gardens

In the video below, curator Laura Donati speaks about the print (in Italian only)