Since the Renaissance, Florence has used public art to beautify the city, edify its residents and send a message of strength to both friends and enemies. But from the 16th-century onwards, there has been less effort to develop a consistent programme of public art in Florence. Nonetheless, there are some notable modern and contemporary statues to be found around the city; on an empty August weekend, we set out by Vespa to find them all on a public art treasure hunt! Located mostly in roundabouts or on busy thoroughfares, most of the works of contemporary public art have been donated by artists to the city since the 1990s. While there isn’t an apparent iconographic theme or acquisition plan involved, the city doesn’t accept donations from just anyone; those public works that are on display send a message that Florence is a contemporary and visual city.

Most of the city’s modern public art is located in strategic roundabouts, which probably isn’t the most appreciative of locations. It’s pretty much impossible to spend time admiring these works, and almost impossible to stop and photograph them. A Vespa and a quiet summer weekend made it possible – in some cases “on the fly”, for others, I managed to cross the road to get a closer look. 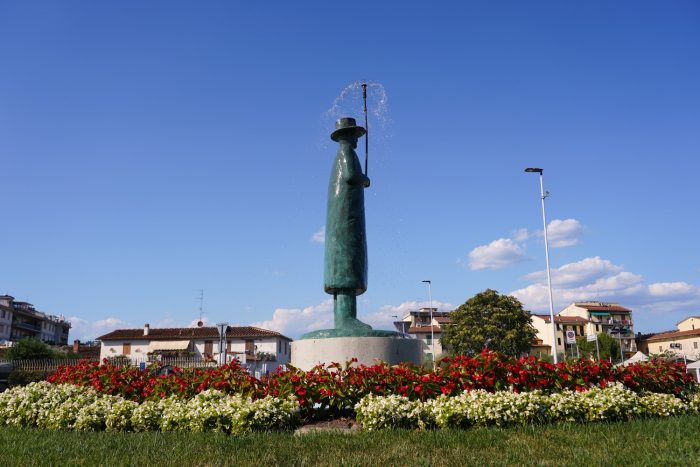 Jean Michel Folon’s Uomo della Pioggia, donated to the city of Florence in 2002, is located in front of the ex-Obi Hall on the viali as you enter the city from the Firenze Sud highway exit. It has been the object of four unfortunate road accidents as careless drivers have missed the roundabout and hit the beautiful work of art, causing the need for restoration (in 2015 it was literally broken in two). The latest installation adds security measures including a higher curb, a taller cement pedestal, bright lighting and video cameras; in fact, just days after the new installation, another car didn’t make the curve of the roundabout, but managed not to hit the statue.

The “Rain Man” is typical of the Belgian artist. Expressionless and yet so expressive, he wears a raincoat and his “umbrella” is a fountain of eternal rain. Personally I think he is an optimist. A number of the artist’s charming works can also be found in the Giardino delle Rose under Piazzale Michelangelo. 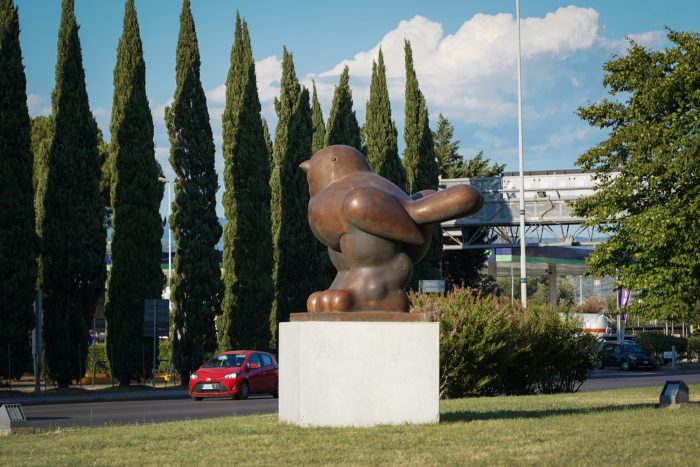 Another really beautiful bronze also welcomes visitors arriving at the other side of the city: have you ever noticed the big fat bird as you exit the airport? La Paloma by Fernando Botero was donated to Florence in 1993 and weighs a whopping 1500 kilos. The work was made in 1990 and locals have nicknamed it “L’Uccellino” despite the fact that the diminuitive is hardly appropriate here. The Paloma or dove represents peace and is a multiple, an image that the Colombian artist has repeated numerous times, so that the same statue can be found in many other locations. Another couple of these birds are located in the artist’s hometown of Medellin and represents a poignant message. In 1995, the bronze bird was the artistic victim of an explosion that tore a hole in its abdomen; 30 people were killed in the incident, and 200 were injured. The explosion was intended as a message to the then-defense minister Fernando Botero Zea, Botero’s son. A whole bird is placed next to the damaged one, and the names of the victims are engraved on the base (source). 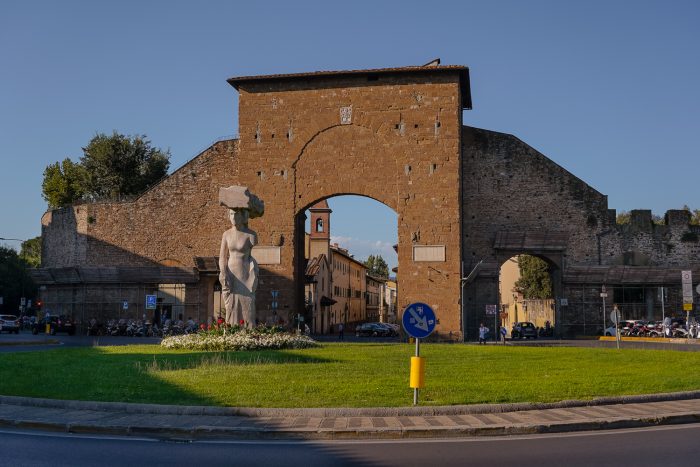 The most criticized roundabout-statue in Florence is probably the one at Porta Romana, Dietrofront by Michelangelo Pistoletto. The 6-meter high statue was donated in 1984 on occasion of an exhibition by the artist at Forte Belvedere.

Nicknamed “woman with headache”, it is actually two women, facing Rome and Florence. The artist’s declaration explains its intended meaning (nothing to do with ibuprofen): “The tension generated by these two figures represents the contrast and circularity between past and future: all that is modern comes from the Renaissance perspective and hence from Florence. My monumental figure is exiting Florence to go meet the world, but is also returning to Florence, in the second figure supported by the first, projected toward the city. It is a return of modernity, a return to Florence after traveling the world.” (source). 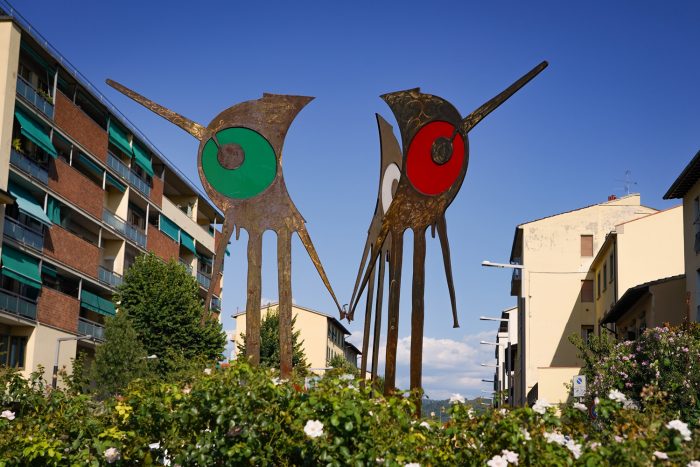 While the last two roundabouts host works by artists who are famous worldwide, various roundabouts in south Florence sport bronze and stained-glass pieces by Enzo Pazzagli, a local artist who recently passed away in 2017. He created the Parco d’Arte Pazzagli at Florence Rovezzano. His 1983 sculpture of the Pegasus, symbol of Region of Tuscany, is displayed outside the Region’s headquarters in Novoli. 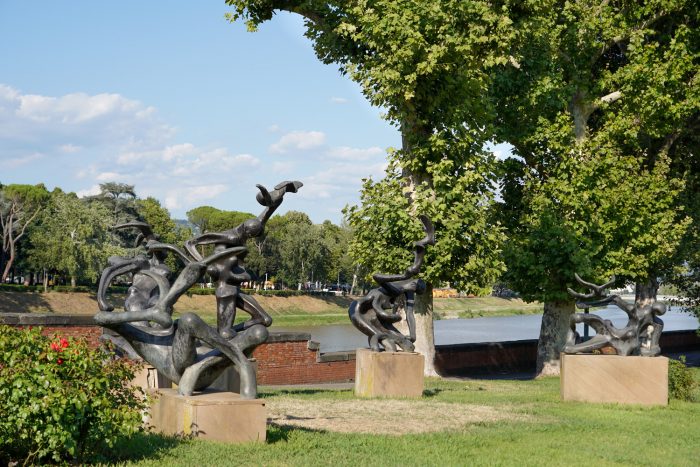 While looking for other works to include in this article, I noticed for the first time a series of bronzes in Piazza Ferrucci near Ponte San Niccolò. Named Fontana della Maternità (despite there not being any fountain currently involved), they are by Sauro Cavallini (d. 2016) and are five bronzes that the artist made at the end of the 1960s, donated to the city of Florence in 1996. The Tuscan artist’s monumental bronzes composed of sinuous curves and human shapes in movement are displayed in prestigious locations around the world. 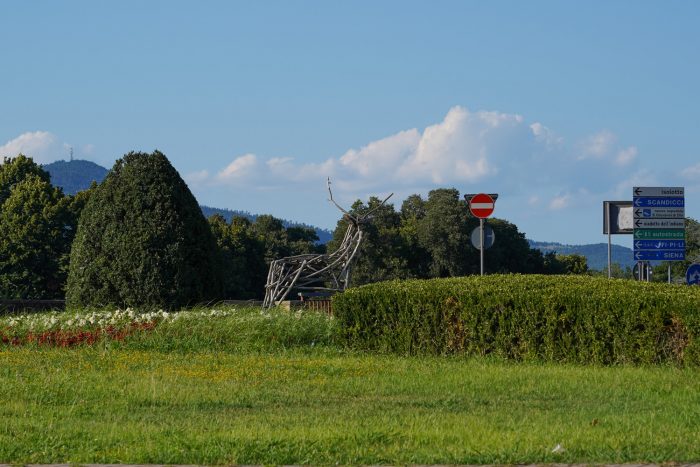 A newer addition to Florence’s roundabout art scene is a piece on the south side of Ponte alla Vittoria: a wooden deer by Il Sedicente Moradi. Like its real animal variety, it’s almost impossible to approach. Other works by this artist can be found at the Borgo Pinti Community Garden and in piazza del Carmine.

Beyond the official limits of the city of Florence, the roundabouts get pretty interesting – don’t miss the gigantic wheel at the Calenzano highway exit (most people hate that one but I kinda love it), and the Keith Haring roundabout in Sesto Fiorentino near the Ipercoop.

Public art in the piazze of Florence

The piazze of central Florence are not easy locations for modern sculpture – any attempt to install anything new, even temporarily, in piazza della Signoria has met with massive resistance. And while I welcome these contemporary injections, I also understand the need to preserve the piazza as-is, being part of a narrative that developed over about 200 years and then stopped. But there are a few new works of art that have been accepted in central Florentine piazze in the past decades. 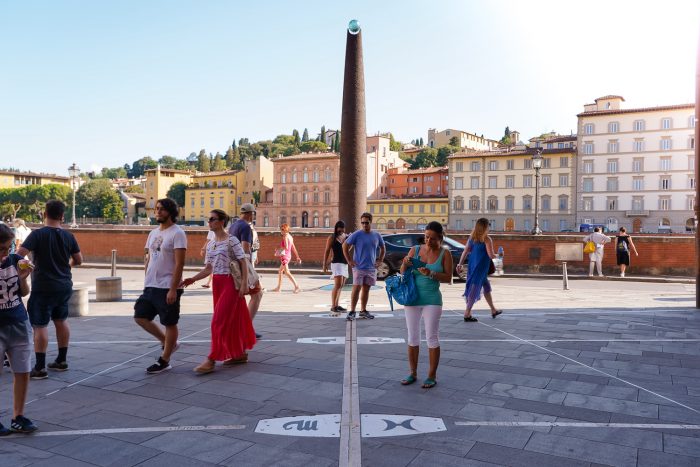 The monumental meridian at Museo Galileo

In front of the Museo Galileo there is a monumental meridian, dating to 2007 and designed by Luise Schnabel and Filippo Camerota. This sundial is made up of a large quadrant traced on the pavement and a gnomon formed from two large bronze stelae that symbolize day and night. A travertine and brass meridian line is drawn on the pavement, flanked with glass and marble signs of the Zodiac. The lines mark the summer and winter solstices while the brass radial lines form a grid and the two solstitial curves indicate the hours. Don’t ask me to read the time though!

As recently as 2017, Piazza San Firenze received a work – La O di Giotto by Helidon Xhixha, an Albanese artist who exhibited at the Boboli gardens that year. The polished steel work refers to the legendary idea of perfection represented by the painter Giotto. At the time of installation, it caused a bit of polemic in the city as the mayor wished to remove the kiosks selling souvenirs from the piazza in order to beautify this space (the sculpture was an excuse to do so). The kiosks have remained. 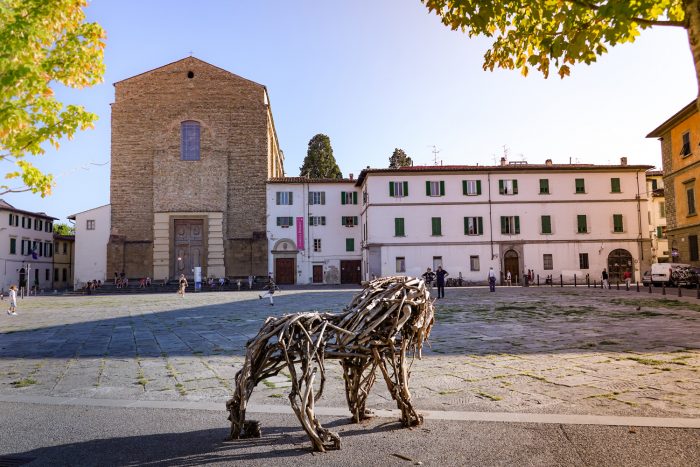 Until a few years ago, Piazza del Carmine was a parking lot; after parking was prohibited, it took the city a while to decide on a plan to remodel and repurpose the space. In June 2018, restoration work was completed and the new pedestrian-only piazza was presented to the public. The center remains an open space, while at the end across from the church, a shady “wood” has been created with 23 elegant trees and original seating made up of a pietra serena base and a church façade backrest representing the city’s eight most important churches. The benches are by Il Bronzetto. A statue of a lion by Il Sedicente Moradi gazes at the church. 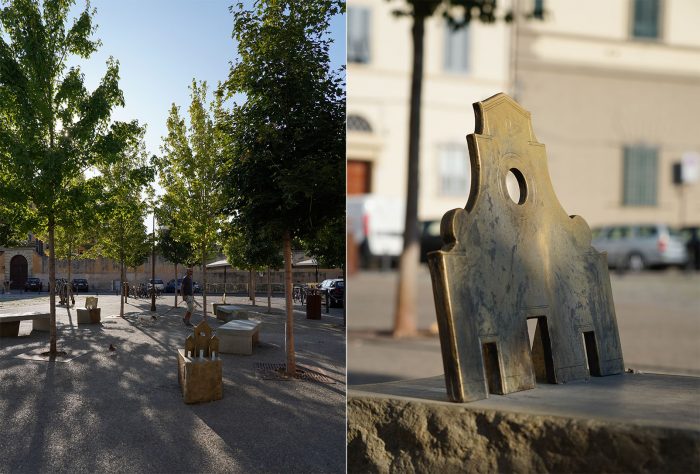 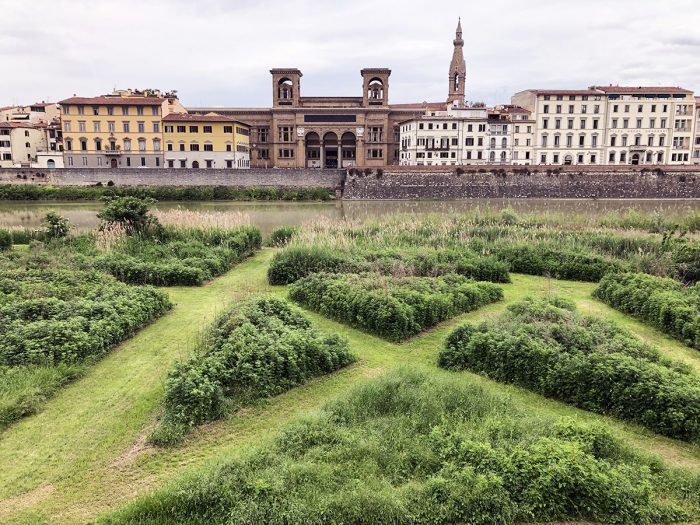 In an effort to increase green areas in Florence, two spaces could be considered works of public art. Along the shore of the Arno, the rich spontaneous vegetation has been cut into geometric paths intended to encourage the visitor to dive in and explore the sounds and colours of nature. The shape, called Terzo Giardino, refers intentionally to that of Renaissance medicinal or herbal gardens, with the desire to get to know one’s self through the ecosystem. This area hosts talks and workshops on sustainable themes. For info see http://www.terzogiardino.org. Concept by StudioPlus. 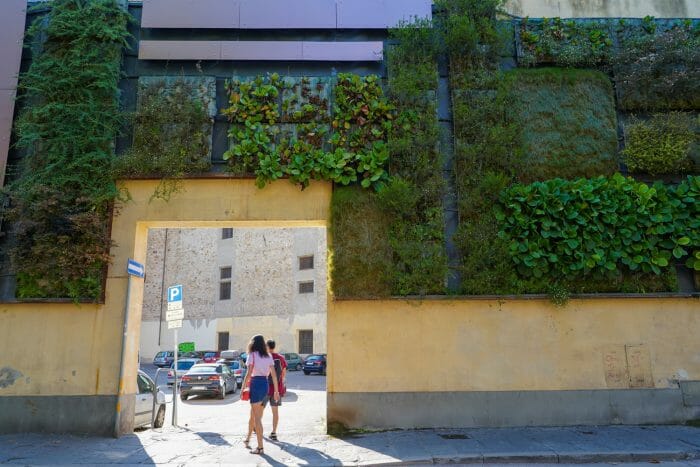 The vertical garden on the viali

Installed in July 2012, there is a Vertical Garden on viale Giovane Italia near Le Murate. This is actually an intervention by the city’s environmental department, but I like to think of this as a work of “green art”. Different coloured, highly resistant species were chosen for the wall, incuding lavender, rosemary, ivy, juniper and others.

What’s your favourite work of public art in Florence? Which ones have I missed?